A Family Affair: Cougars for Life 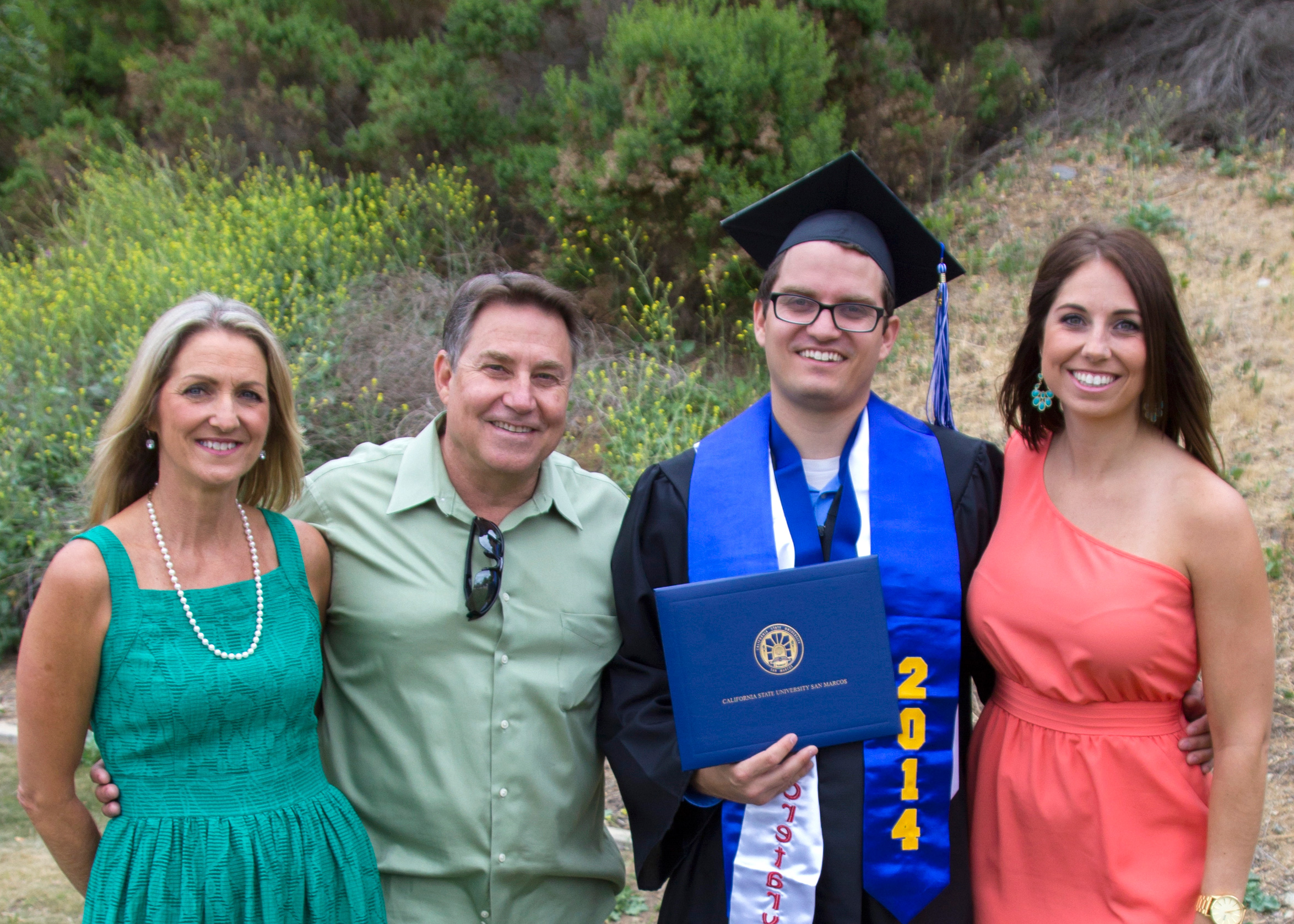 For the Murphys of Escondido, CSUSM is all in the family. After the youngest, Kevin, walked across the stage at commencement this May, their entire family can boast status as Cal State San Marcos alumni.

Mom, Mary Murphy, enrolled at CSUSM in the late ‘90s after years in the professional world and as a stay-at-home mom. She had always dreamed of being a teacher, but never finished her college degree. When volunteering in her children’s elementary schools she rediscovered her love of teaching and her husband encouraged her to return to school.

“As a re-entry student who didn’t think she would ever be college-bound again, I was intimidated to go back,” Mary shared. “I chose Cal State San Marcos because of its size and the ability to develop relationships with faculty members.”

Her children Kelli and Kevin had the unique opportunity to see their mom as a college student while they were in elementary school. They were exposed to the Palomar College and Cal State San Marcos campuses as children – sometimes joining Mary for classes – and they attended her CSUSM commencement ceremony in 1999.

Not long after Mary received her teaching credential and began a new career in the Poway Unified School District, her husband Scott was laid off from his job. After watching his wife pursue her academic goals, he was inspired to return to college. He completed a business administration degree with an emphasis in high tech management in 2002, used his degree working in business for 10 years, and is now a software engineer.

“I think our family’s experience at Cal State San Marcos gave all of us a sense of confidence. You could set your path, work towards the goal and then succeed,” Scott reflected. “CSUSM did a great job preparing students for the communication skills needed in the workplace.”

Six years later the Murphy’s daughter Kelli was graduating high school. She was intimidated by the academic commitment of college, but ultimately her parents’ example of dedication to their education helped convince her to pursue an undergraduate degree, starting at Palomar College and transferring to CSUSM.

“My parents were the reason I went to college. They really set an example of the importance of an education and hard work,” she said. “When I walked across that stage at commencement, I was not only proud of my achievements, but I was extremely grateful for my parents’ consistent encouragement to get me there. Without them I wouldn’t have pushed through and realized my potential.”

Kevin started his college career at Palomar College, like his mom and sister, but then transferred to UC Berkeley to study film. He ultimately decided that the northern California campus wasn’t a good fit for him. The welcoming environment that he found at Cal State San Marcos convinced him he made the right move to attend CSUSM, where he changed his major to business and joined Alpha Kappa Psi along with his sister.

“The College of Business Administration at CSUSM really exceeded my expectations. I was just as impressed with my faculty as I was with the faculty at UC Berkeley,” Kevin said.

He just completed his Bachelor of Science degree in business administration with an emphasis in marketing. His work as a part of Senior Experience, a capstone requirement for all senior-level business students, has fostered in him an interest in entrepreneurship. For now he hopes to find a full-time job in marketing, and wants to make an impact by helping others, mentoring educationally-at-risk youth toward a path to college.

“Over the last 15 years I’ve seen the campus change but the school is still young. My whole family has a lot of pride in seeing Cal State San Marcos grow.” He added with a laugh, “And as the athletics program grows, we’ll all be cheering for the same team.”

Mary described her feelings this way, saying, “There was a time when I thought I’d never finish my college degree, and now I’ve seen my whole family graduate from college at Cal State San Marcos. It really is amazing; it does my heart good.”

A Family Affair: Cougars for Life