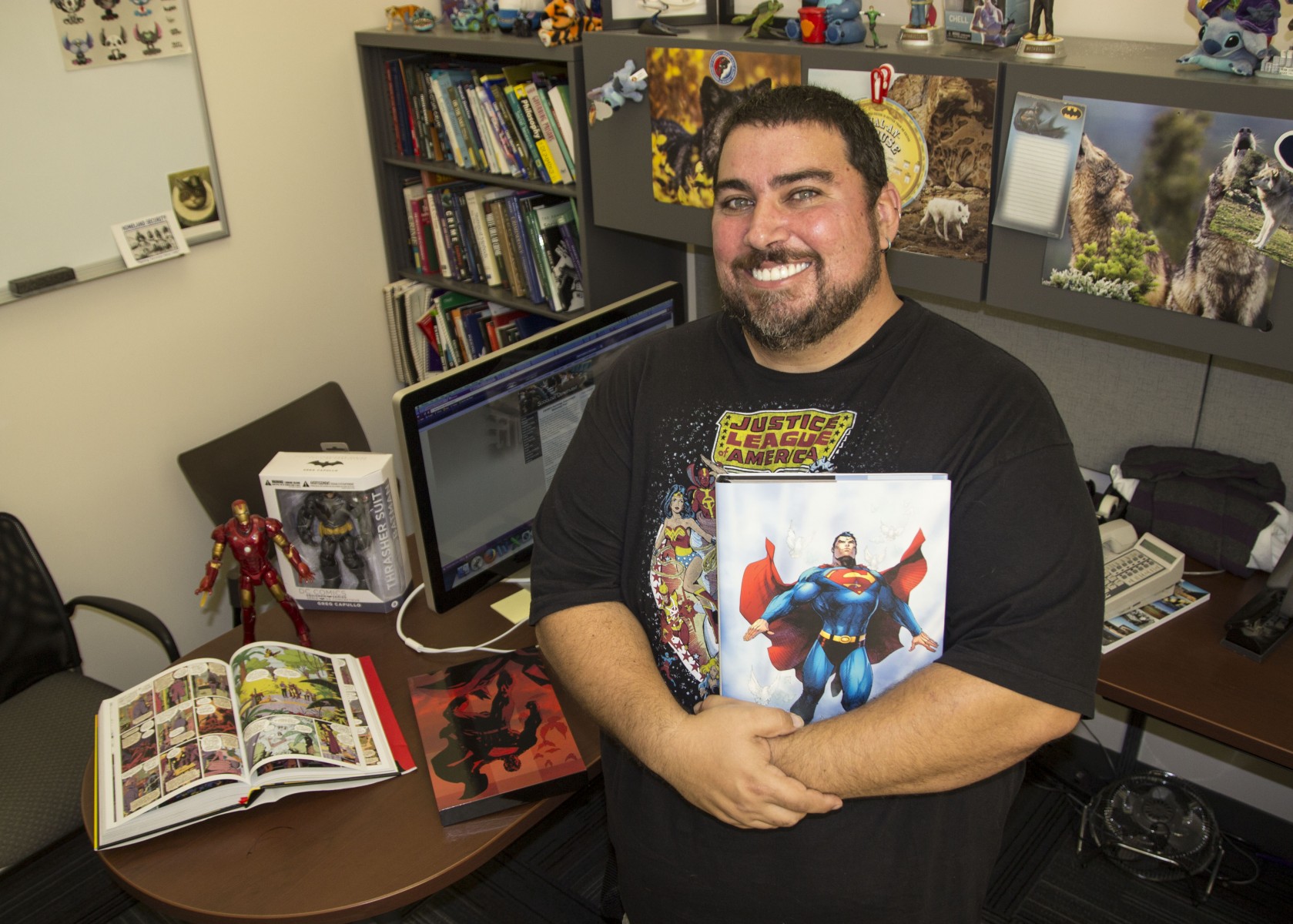 “For the most part, my students like it,” said Atherton of the role comic books play in the curriculum of his criminology courses. “It’s a way for them to get more engaged in the subject matter. But I suppose some people may see it as kind of weird.”

Perhaps so, but the lessons are real—and often profound. During a discussion on police culture, for example, students were asked to read a Gotham Central story detailing the consequences surrounding a policewoman who is a lesbian and outed by someone on the force. That was followed by assigned academic papers about the challenges facing gay law enforcement officers.

“Everything the academic papers dealt with was touched on in the comic,” Atherton said.

“We’re not doing this as an alternative to learning. It’s a part of the learning.”

One of his more popular lessons, titled, “Who Could Prevent More Crime—Batman or Bruce Wayne?” offers another example. At first blush, some may wonder: Really? This is a criminology course? In fact, the lesson involves an abundance of academic investigation.

“Research shows that all of the punishment and deterrence we invest in doesn’t really have an impact on crime,” Atherton said, equating such punishment and deterrence to the Batman approach. “Criminals really don’t think about those things when they’re robbing a liquor store. Things like education and economic opportunity—the type of things a billionaire like Bruce Wayne might invest in—are clearly more effective.”

Integrating comics into his work was probably just a matter of time. It grew from his practice of using movies to help illustrate concepts of criminal justice, a practice that led to a Crime, Films & Society course (Sociology 490) and included such films as Copland, Minority Report, and V for Vendetta.

“Films and comics reach a wider, broader audience,” Atherton said. “They can affect discussion more than any academic article you could write in a journal.”

He added: “I’ve probably been collecting comics since I was seven or eight years old. It’s been a lifelong interest.”

Atherton, who attends Comic-Con each year, added he’d like to someday take part in an academic panel at the annual San Diego event.

An Escondido native who graduated from San Pasqual High School, Atherton has been collecting and reading comics since he was a young child. He’s also a first-generation college student who attended Palomar College in San Marcos before earning his Bachelor of Arts in sociology from UC San Diego, his Master of Arts in sociological practice from CSUSM, and his Ph.D. in crime, law and justice from The Pennsylvania State University. His dissertation investigated Hispanic outcomes in federal courts, a study that found Hispanic defendants receive significantly more punitive sentences than do white defendants, and that black Hispanics experience different levels of disparity in sentencing outcomes.

Atherton taught at Central Connecticut State University for two years as an assistant professor before moving back home to Cal State San Marcos. He currently is a Faculty Fellow for Teaching & Learning for the 21st Century, and he is not beyond thinking outside the proverbial box. He received media attention a few years ago for his practice of incorporating Twitter into his lesson plans.

Wrote Atherton at the time: “Given the complex nature of criminological theories, it may seem like reductionism to simplify it down to 140 characters. However, the exercise is not about presenting theories in the most simplistic manner, rather it is an exercise in being able to synthesize the numerous aspects of the theory into a succinct statement.”

Students would earn points for being able to conceptualize concepts and articulate their thoughts in a single tweet.

“I really like it,” student Mark Hirata told San Diego Union-Tribune reporter Deborah Sullivan Brennan in 2012. “He’s basically using it so we can study and understand it better. It is pretty challenging to condense an entire book of hundreds of pages down to one sentence of 140 characters. It’s a good way to help you understand the theories better.”