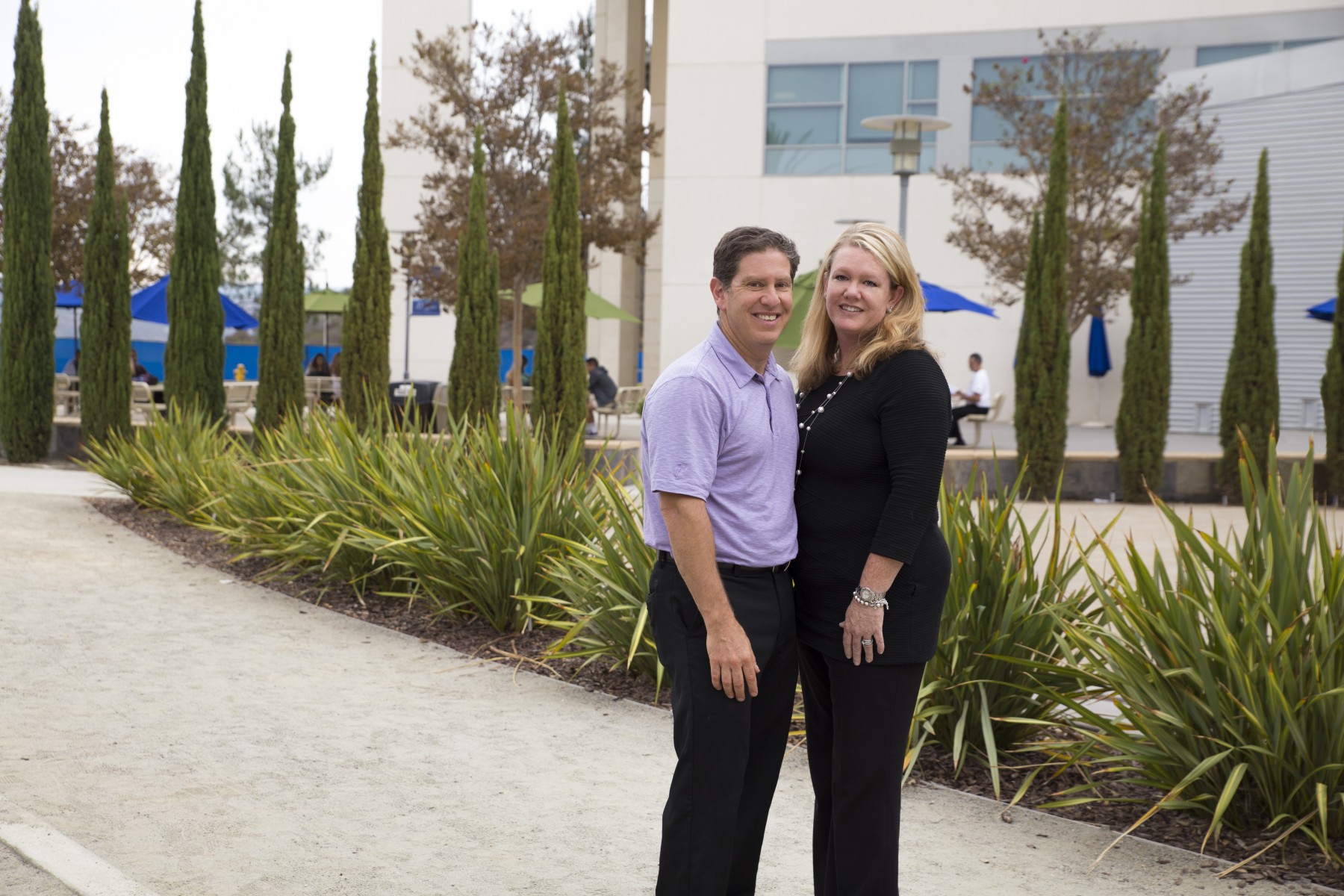 An experienced entrepreneur and a former CEO, Emilie Hersh knows a thing or two about the importance of a solid business education. Which is a big reason why she and her husband, Mark, a longtime employee at Carlsbad-based ViaSat, are pledging $50,000 for scholarships and other initiatives at the Cal State San Marcos College of Business Administration.

The gift, in five annual installments of $10,000 each, is being provided in conjunction with National Giving Day on Nov. 29.

“Cal State San Marcos has some really amazing students coming into the College of Business Administration, and we want to do whatever we can to help them,” Emilie said.

Emilie has been working with CSUSM since she approached the University several years ago while assembling a health care advisory board and was introduced to Dr. Rajnandini Pillai, a professor of management who serves as executive director and founding member of the University’s Center for Leadership Innovation and Mentorship Building.

“It didn’t take long for me to learn about the great things this university was doing and how committed it was to working with the community,” Emilie said. “I was sold.”

Her involvement includes serving on an advisory board for the Dean of the College of Business Administration since May 2011, serving as a co-host for the “In the Executive’s Chair” course, serving as an Executive in Residence, and co-creating the Professional Mentor Program, which provides students a unique opportunity to learn directly from business professionals in a one-on-one relationship.

Mark began working with the University about the same time. Over the years, he has served on the Athletic Director’s Council, the Global Supply Chain Management Advisory Board and the Management Information Systems Advisory Board. In addition, he has addressed a number of graduate and undergraduate level classes and conducted mock interviews with students who are preparing to put their business degrees to work.

“Emilie and Mark represent the best of Cal State San Marcos, and that is a commitment to bring students, community and the University together to work toward the betterment of all,” said Dr. Jim Hamerly, Dean, College of Business Administration. “We are so grateful for their generous contribution, and hope it will encourage others to assist us in reaching our vision of building a distinctive public University known for investment in student success, service to the community and innovation in higher education.”

Despite their contributions, the Carlsbad couple prefers to work behind the scenes.

“We were able to give back in this particular way at this particular time, and we’re honored to do so,” Emilie said. “But that shouldn’t take the focus away from the incredible things that people all over are doing for one another every day.”

Emilie, who earned her bachelor’s degree at UC Santa Barbara and her MBA at the University of San Diego, began her career as a Special Projects Coordinator and Marketing Manager with USD. Building upon her experiences at PricewaterhouseCoopers as a consultant and at InterKnowlogy as CEO, she launched her own consulting company, Unbuttoned Innovation, Inc., in 2015. She’s also a member of the Carlsbad Educational Foundation’s Board of Directors and serves on Microsoft’s Voices for Innovation Advisory Council.

Mark’s roots at CSUSM reach back to the late 1980s, when he was a San Diego State University student taking courses at a satellite campus in San Marcos – a campus that would evolve into CSUSM. He earned his bachelor’s degree at Cal Poly Pomona, an MBA from the University of San Diego, and he has spent most of his career at ViaSat.

Both say they are especially impressed with CSUSM’s commitment to diversity and expanding educational opportunities to all.

“What really stands out to me is that more than 50 percent of the students at Cal State San Marcos are the first in their family to go to college,” Mark said. “That’s just an amazing figure, and it means Cal State San Marcos is having a profound impact on opening the doors to higher education for everybody.”

“We’ve hired many students at ViaSat for internships and as full-time employees, and they all bring a high-caliber of training with them,” he said.