CSUSM's "Trailblazer," "Cool Woman," and "President of the Year"

Cal State San Marcos President Karen Haynes has received recognition from several regional and statewide organizations this spring, honoring her for exceptional leadership in higher education and for her status as a role model for women in and out of academia.

A Champion for California’s Students 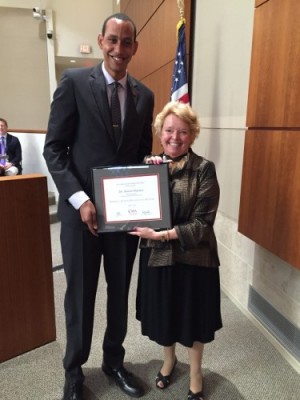 At the March 25 California State University (CSU) Board of Trustees meeting in Long Beach, the California State Student Association (CSSA) presented Haynes with the Robert C. Maxson President of the Year award.

CSSA is the single recognized voice for more than 425,000 students in the 23-campus California State University (CSU) system. Founded in 1959, the association is the acknowledged statewide student organization designed to represent, serve and protect the collective interests of CSU students.

Each year the CSSA recognizes one CSU campus president whose leadership reflects a commitment to the mission of the CSSA, who has demonstrated exceptional inclusion of students within the context of shared governance and has assisted the CSSA in advancing its statewide policy agenda.

“It is probably the highest honor a president can receive to be recognized in such a meaningful way by students in one's own university system," said Haynes. "With a strong commitment to the mission of our system and its students, I am proud to have instilled a culture of leadership across our university reflecting fairness, openness, honest communication, integrity and diversity. I appreciate the efforts of the CSSA to preserve and protect the unique qualities of the CSU and its mission to provide high-quality, affordable education to the students across California. To be recognized by CSU students in this way is truly gratifying.”

“CSSA is pleased to recognize Dr. Karen Haynes as our 2014-15 President of the Year,” said CSSA Chair Devon Graves. “Her student-centered leadership style, willingness to involve students in decision-making, and support for statewide student advocacy efforts made her the standout nominee this year. We are particularly grateful for President Haynes' successful efforts to incorporate and effectively serve former foster youth in the fabric of CSU San Marcos, and the entire CSU system.” 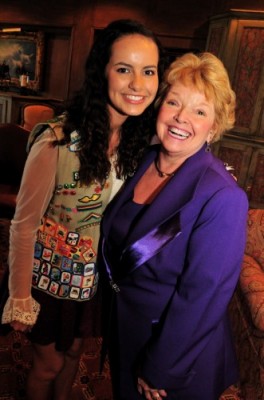 At a ceremony on April 14, President Haynes was named one of Girl Scouts San Diego’s Cool Women of 2015, honored for her extraordinary leadership and community service. She was among 11 Cool Women and one Cool Girl honored.

“A social worker at heart, Karen brings the ideals of that profession to her presidency,” said Magda Marquet, founder and co-chair of Althea Technologies and AltheaDX, and a 2014 Cool Woman. “Creating programs for foster youth, veterans, minorities and other under-represented populations, she is raising our region’s educational attainment rates. Karen was a Girl Scout, and she encourages girls to be ‘brave, bold … and whatever they want to be.’ That’s a great lesson for all of us!”

“My professional career has always been in social work, and clearly social work connects to the Girl Scout motto of helping others at all times,” said Haynes. “And what I consider the basic job of a university president is also to reach out, touch people and help people.”

Later this month, President Haynes will be one of six CSU women presidents to receive the Trailblazer Award from Leadership California in recognition of groundbreaking achievements and leadership in academia.

Initiated in 2010, the Trailblazer Award is awarded annually to women who are pioneers in their fields. This year marks the first time in Leadership California’s history that six women have been selected to receive the award as a group. The six honorees will be recognized at the Legacy of Leadership awards ceremony on April 27 in Los Angeles.

According to Leadership California, the annual awards celebrate “women of influence who exemplify a spirit of exploration, passion and groundbreaking achievement that leads the way for others to innovate and succeed.”

CSUSM's "Trailblazer," "Cool Woman," and "President of the Year"