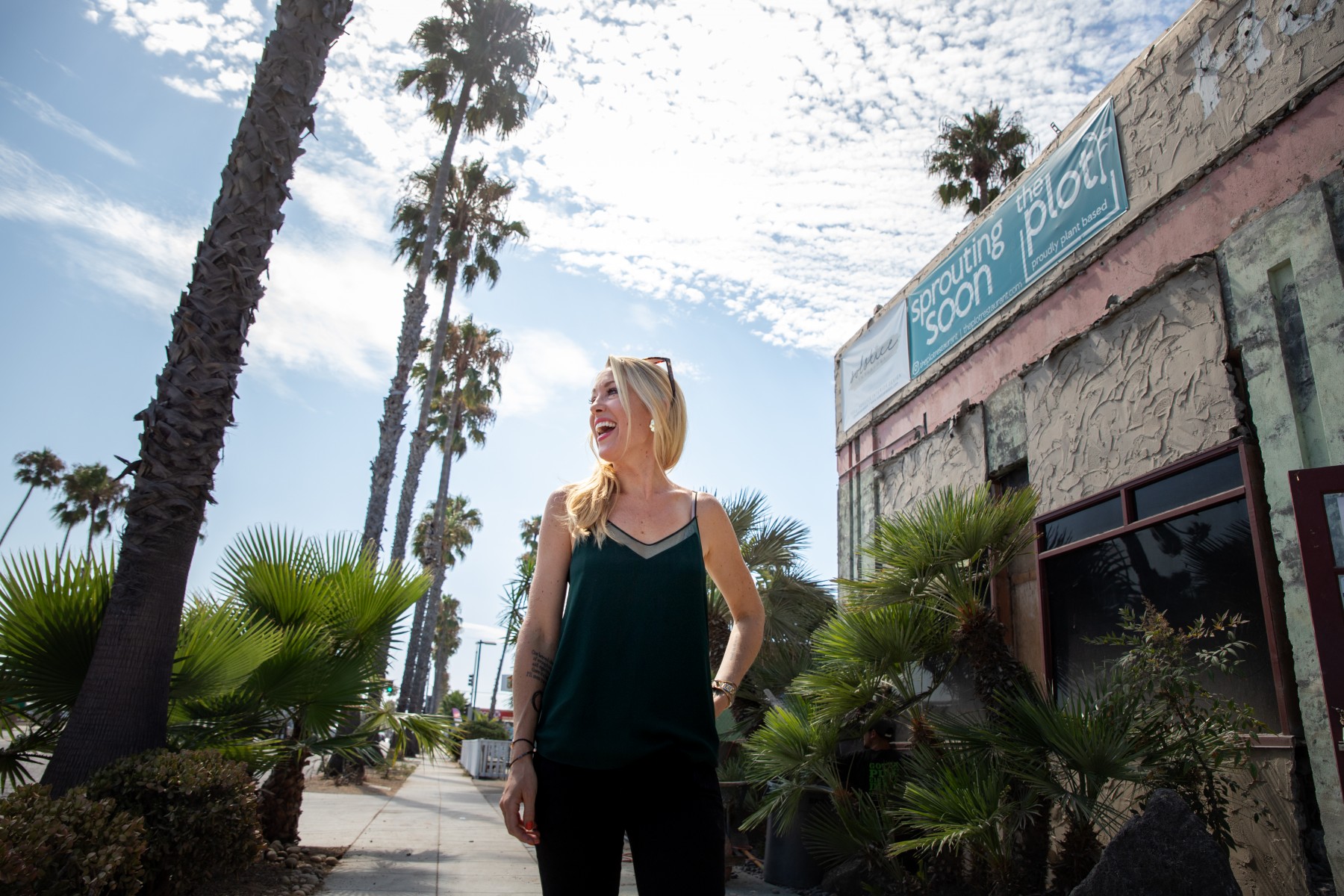 CSUSM alumna Jessica Waite is an Oceanside restauranteur and vegan activist who, in December, plans to open an entirely plant-based eatery called The Plot. Photo by Christine Vaughan

Jessica Waite had a lot of the same worries that most suburban American kids face, concerns related to school performance, social currency, the health of loved ones.

But for Waite, growing up in Kirkland, Wash., outside of Seattle, her anxiety was broader, deeper, more acute.

“From the time I was little, I’d have panic attacks, and they were about big-picture things,” said Waite, a Cal State San Marcos alumna. “I always felt this sense of urgency, this feeling that there’s so much that needs to be fixed. I knew that there was so much to do on this planet.”

Her upbringing surely fed that worldview. Waite was raised in a family of animal-loving environmentalists. If someone in their neighborhood cut down a tree, her mother would plant at least one to replace it. Her father is an avid composter who abhors waste of any kind. She and her three siblings grew up amid dogs, cats, rabbits, turtles, even goats.

And the Waites had a little plot of land in the backyard for growing fruits and vegetables. Decades later, Jessica has another plot in mind, one she hopes will sprout into something on a grand, even culture-shifting scale.

Now an Oceanside restauranteur and vegan activist, Waite is close to realizing her vision of a dining spot that is entirely plant-based and as close to zero waste as she can possibly manage. The concept, called The Plot, is scheduled to open in December at 1733 Coast Highway, about a block north of the other two restaurants that Waite owns with her husband, regionally renowned sushi chef Davin Waite.

“When we talk about our ‘why’ in life, mine is to minimize suffering on this planet,” Waite said. “Then there are the strategic objectives, like how am I going to get there? And that’s by bringing people closer to their food and showing the health benefits and taste benefits of a plant-based diet.”

Waite, who was a vegetarian by age 7 and has been a vegan for about 20 of her 36 years, considers The Plot to be the most idealistic restaurant she could conceive based on her strongly held convictions. Located in a 4,400-square-foot-building that used to be a sushi house and is being transformed at a cost of about $1.25 million (money that Waite herself raised), The Plot will offer a menu that will fulfill Davin’s vow to do “cool stuff with plants,” it will be supplied chiefly with food grown on area farms, and it will go to extremes to avoid sending material to the landfill.

The 20-year lease that Waite signed even comes with a small rental cottage with a big yard behind the restaurant where she plans to create an urban garden and host private events.

Davin Waite has long been known in local circles for his creative and boundary-pushing dishes, but with this venture he will subtract seafood and four-legged animals, both of which he employs at his other restaurants (animals to a much lesser extent). The Plot menu is still being finalized, but possible items include banana peel tacos, sloppy joes made with mushroom stems and walnuts, a Reuben with beets instead of corned beef, and a vegan twist on chicken and waffles.

“I wanted to do with Jessica a restaurant that is not a bunch of fake meats. There already are people doing that, and doing it well,” said Davin, who has been a chef for more than two decades. “I just really wanted to focus on plants. I mean, I eat pretty well. I’m probably a vegan who garnishes their food with meat. And doing what I do, I definitely think it’s important to have a plant-based restaurant where the chefs remember what meat tastes like.”

If The Plot succeeds as Jessica hopes, she envisions the large restaurant and kitchen acting as the anchor for a chain of similar plant-based outlets, starting in San Diego and Orange counties and spreading outward from there as demand dictates.

The Plot is a natural extension of the pair of restaurants Waite already runs and the sustainability projects she has pursued with Davin for almost 10 years. In 2013, a year after she graduated from CSUSM with a degree in psychology, Jessica teamed up with Davin – whom she had worked with at The Fish Joint, a now-defunct Oceanside sushi bar – to open Wrench & Rodent Seabasstropub (the colorful name is an homage to the pubs of England, where Davin spent much of his childhood).

To call it a shoestring operation would be a vast understatement. The couple borrowed $700 to pay for fish on the first night, and Jessica used the last $300 in her bank account to buy restaurant necessities. Wrench & Rodent didn’t even have a street sign for well over a year. But the sushi spot gained a loyal following thanks to enthusiastic reviews on websites like Yelp and the vocal advocacy of Tommy Gomes, a prominent fishmonger from Catalina Offshore Products.

Less than a year into its existence, Wrench & Rodent broke through by being featured as one of the best restaurants in the county by Modern Luxury magazine, alongside such high-end places as Ironside Fish & Oyster and Juniper & Ivy, both in Little Italy.

“We didn’t have access to any kind of a kitchen. We had this little toaster oven to make scallops on,” Waite said. “We were always playing punk music. Just wildness in here. And new customers would be like, ‘What the heck is this?’ But the food is just so good. The food was an experience they couldn’t have anywhere else in San Diego.”

Waite had aspired to attend medical school as a student at CSUSM, and after she graduated, she took law school classes online for one quarter. At some point along the way, however, she decided that the restaurant business wasn’t just a dalliance to help support her husband’s dream, but rather her preferred career path as well. So to bolster her skills, she applied for and was accepted into the two-year MBA program at Pepperdine University. 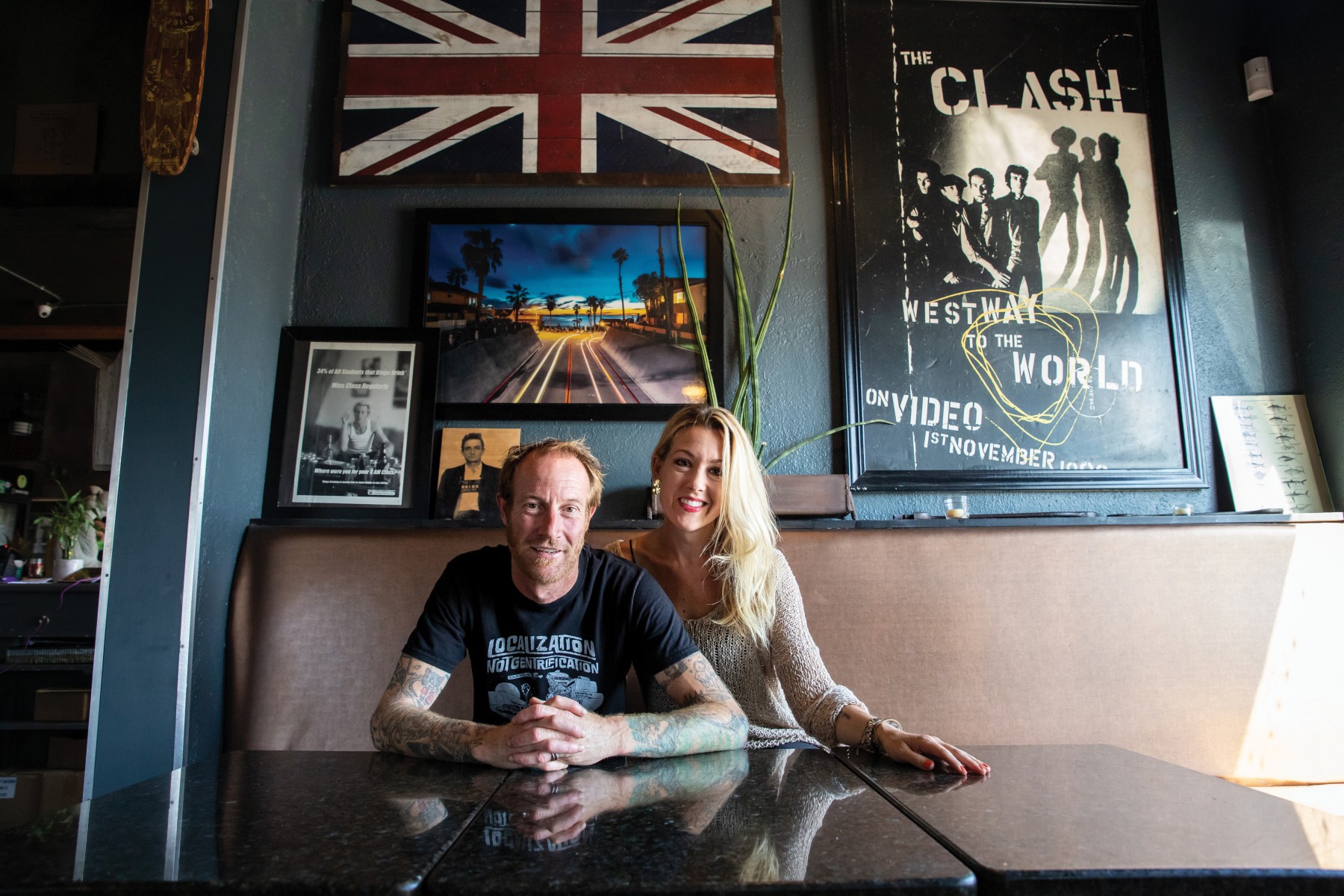 Jessica Waite with her husband, sushi chef Davin Waite, in one of their two existing restaurants, the Wrench & Rodent Seabasstropub in Oceanside. Photo by Christine Vaughan

As she pursued her master’s, Waite in 2016 opened a second restaurant, which happened to be in the same building as Wrench & Rodent (a taco shop vacated the space). Named The Whet Noodle, it’s a ramen joint that puts into practice Waite’s philosophy of byproduct utilization. For example, when fish comes in to Wrench & Rodent, the bones and skin and cartilage can be utilized to make broth for The Whet Noodle. Or fish that can be served raw for only three days at Wrench & Rodent can be grilled or smoked next door.

“That’s a huge part of what Davin does because these are all valuable resources,” Waite said. “You look at any other culture and you’re like, ‘Who is wasting this much, and why would you take something that could be incredible and throw it away because you’re lazy?’ ”

Unlike its neighbor, The Whet Noodle struggled to attract a clientele. Part of the problem was negative online reviews from diners expecting a traditional ramen experience. The restaurant’s website now contains a disclaimer – “We ask that you keep an open mind and a sense of humor” – and after Waite came close to abandoning the idea, she’s happy to report that it has found its niche as a local hangout.

But for all their spunky charm, neither Wrench & Rodent nor The Whet Noodle truly represent Waite in her full-throated zeal. The Plot does. She sprinkles PowerPoint presentations about the restaurant with phrases like “Feeding the evolution” and “Be the change, one bite at a time.” She tells the story of its mission so compellingly that she raised the bulk of the money for the renovation in only a few months. And she has only increased her activism in recent years, including becoming president of Berry Good Food, a foundation that supports a local and regenerative food system in San Diego and northern Baja California.

“It’s not necessarily trying to get everyone in the community to be strictly vegetarian or vegan, but just to have people make the transition and think, ‘Oh, maybe I don’t have to have meat for every meal,’ ” said Victoria Riesgo, who graduated from CSUSM last spring with a bachelor’s in psychology and worked at Wrench & Rodent for five years, rising to general manager. “We do have evidence showing that, as a culture, food systems like ours use a lot of resources and produce a lot of carbon emissions. So it’s like a small step in a societal change.”

Waite is a voracious reader who tends toward nonfiction about health and nutrition. At CSUSM, she was heavily influenced by “The China Study,” a 2005 book that reveals findings from the most comprehensive study ever undertaken of the relationship between diet and the risk of developing disease. One of her favorite recent discoveries is “Kiss the Ground: How the Food You Eat Can Reverse Climate Change, Heal Your Body & Ultimately Save Our World.”

Waite talks a lot about saving the world, though she admits that she does it in part to get a reaction (“I like people’s eyes to pop and look at me like, ‘Is she as crazy as she sounds?”). But she’s dead serious about incremental progress – about doing all she can to make plants cooler to eat, to reduce the suffering of animals, to curtail the damage that humans inflict on the planet.

“It’s about little steps,” Waite said. “I’m not going to sit here and say, ‘Oh, well, we’re gonna save the world. The world is gonna be fixed.’ It is very tongue in cheek, but it also is exactly what I am dedicated to doing for the rest of my life.”