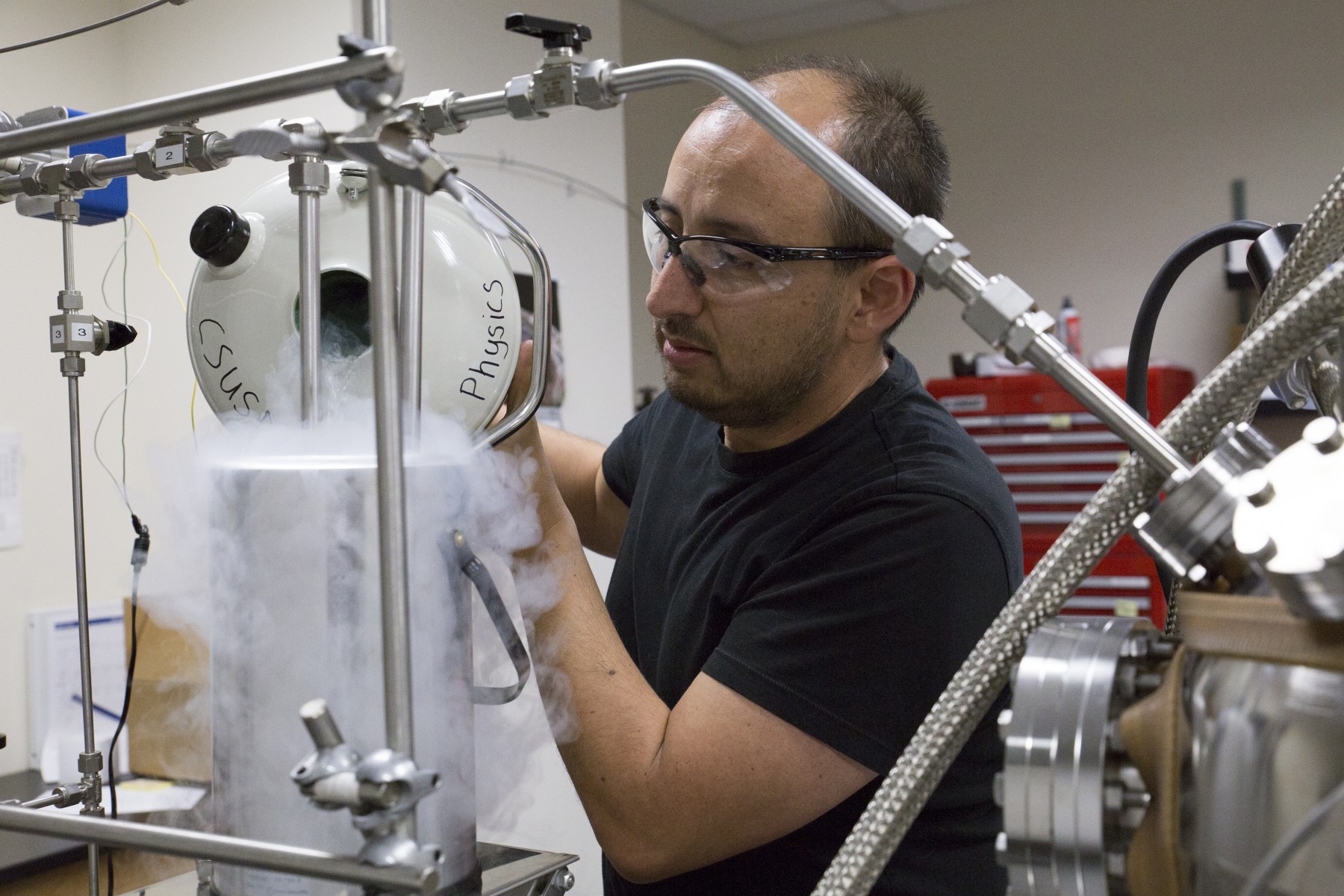 Gerardo Dominguez began his college career as an engineering major before switching to physics.

But some two decades later, engineering is back on his radar.

Dominguez, an associate professor of physics at Cal State San Marcos, is the project director for a recently awarded grant worth nearly $6 million under the Hispanic-Serving Institutions STEM Program. The grant will provide foundational funding for establishing an engineering program at CSUSM.

“I’m hoping that this, together with support from local stakeholders in the community and local companies that are interested in seeing an engineering program launch, will help us develop a high quality engineering program for this region,” Dominguez said.

Though it’s only early October, it has already been an eventful fall semester for Dominguez. In addition to news of the HSI grant, he is among the 2016 Class of Hispanic Engineer National Achievement Awards Conference (HENAAC) Award winners who will be honored at the 28th Annual HENAAC Conference in Anaheim this week. Dominguez, a CSUSM faculty member since 2011, is being honored for Outstanding Technical Achievement.

Dominguez is quick to spread credit to others for CSUSM’s success in obtaining the HSI grant, noting that the application was put together by a team that includes co-principal investigators Ed Price, a professor of physics, and Youwen Ouyang, the department chair of computer science and information systems.

While the amount of the grant is significant, Dominguez said it is just a start. Launching an engineering program will require private-sector funding, and Dominguez noted that it still must go through an internal approval process that includes review by a number of committees before going to the chancellor’s office for approval.

“There are all kinds of decisions that will need to be made in the coming months about how to start spending this money and spend it wisely,” Dominguez said.

Dominguez said an engineering program at CSUSM can help fill an important regional void for students who would otherwise need to attend San Diego State or UC San Diego. He also noted the significance of being able to offer an engineering degree for first-generation college students.

“Having a degree in engineering can be a very low-risk pathway to well-paying jobs with just a bachelor’s degree,” he said. “That’s one thing that can be significant to some of our students.”

Dominguez was a first-generation college student himself and sees himself in many of the students at CSUSM, where more than half of attendees are first in their families to attend college.

Dominguez’s interest in science was sparked in elementary school when he was drawn to books about asteroids, glaciers and volcanoes. His passion continued to develop thanks to a sixth-grade science teacher. Dominguez vividly remembers a demonstration in which the teacher took an empty metal can, heated it up on a hot plate and showed how air pressure would crush it.

“Just knowing that there’s this whole wide world out there that can be explained through science kept that initial spark going,” Dominguez said.

Dominguez’s aptitude in math and science steered him toward engineering when he went to UC Berkeley as an undergraduate. But in the process of taking a variety of science courses during his first two years he found himself needing to answer a question that would determine his path for the remainder of college: Was he an engineer or a physicist?

Though Dominguez chose the path of physicist, he notes that the motivations of both physicists and engineers is rooted in a desire to understand the world using math and science.

“I think where maybe they deviate is engineers want to apply their knowledge and they want to apply it right away,” he said. “They want to make a product or make something that is practical. Whereas a physicist may start a project with a very specific goal in mind, but if they encounter something that’s a puzzle along the way, they’re happy to follow that puzzle and even forget about the original motivation for studying what they were studying.”

Dominguez wouldn’t be surprised to see future CSUSM students follow a path similar to his when it comes to choosing between different fields. Perhaps they start in engineering only to find physics more to their liking. Or they could start in physics and find their true passion is engineering.

Dominguez is looking forward to that day when CSUSM students will be able to make that choice.

“Providing that opportunity for students coming to San Marcos to have a bachelors in electrical engineering or software engineering will be tremendous for our region,” he said.