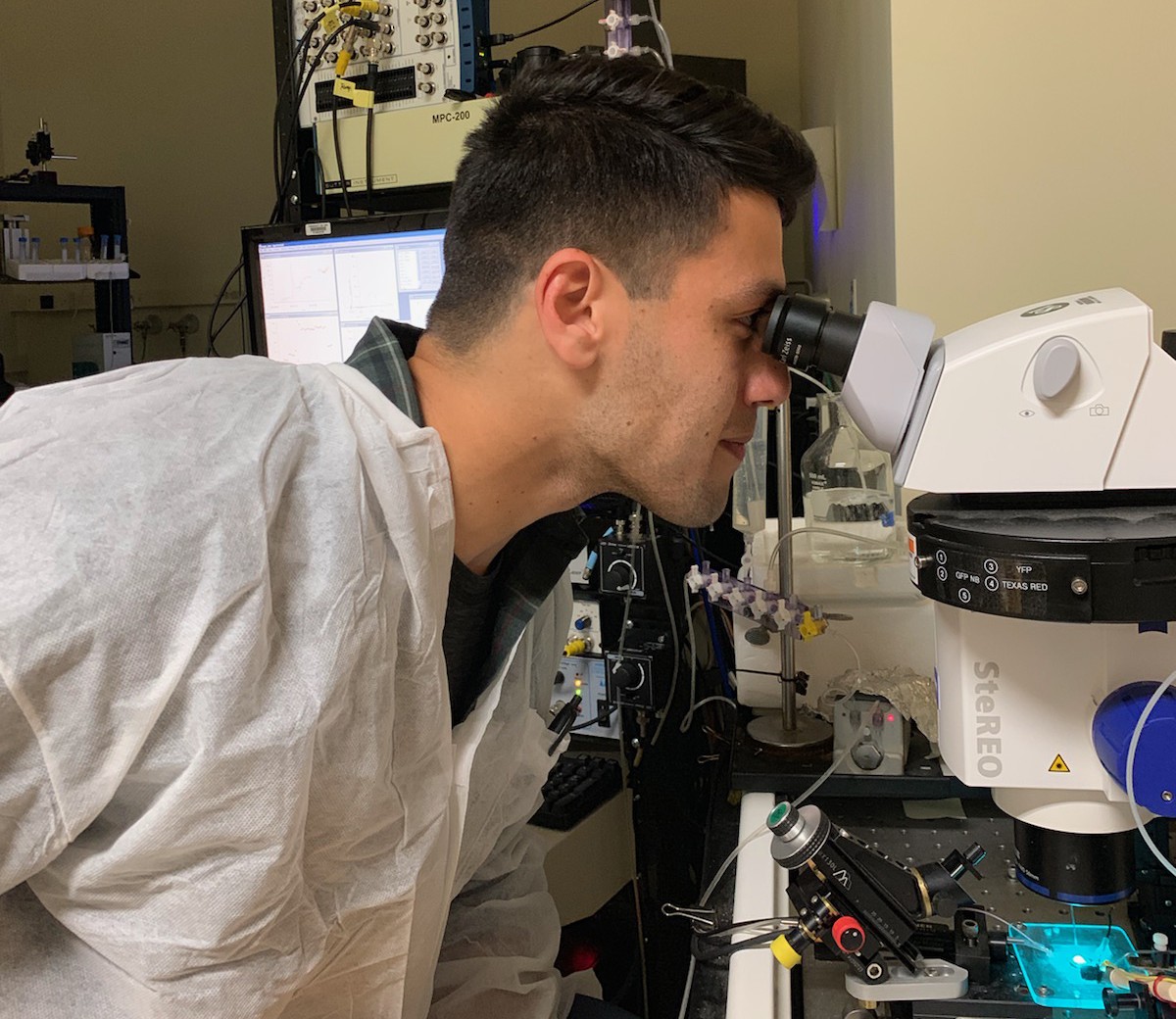 Senior kinesiology major Sean Hernandez plans to apply to medical schools after he graduates from CSUSM in May.

His mother is a high school calculus teacher. He has three older sisters, all of whom went to college. One of the three even graduated from Stanford University, one of the most elite institutions in the country.

Hernandez knew what path he was expected to follow. He just wasn’t all that eager to reach his destination. He enjoyed playing sports, hanging out with his friends, and “doing enough to make my mom happy.”

That all changed the instant he enrolled at Cal State San Marcos.

“I was like, ‘Well, this is my money. This is loans I’m taking out, this is on me,’ ” Hernandez said. “ ‘Do I actually want to go to class and take in knowledge or do I just want to cruise by again?’ And I decided I wanted to make the most of it.”

Hernandez is getting his money’s worth, and then some. Now a sixth-year senior, he’s still riding a high from the greatest achievement of what has evolved into a stellar college career.

Last month, he was one of only 12 California State University students – and 82 in the nation – who won awards for excellence in research at the National Diversity in STEM Conference, the largest multidisciplinary and multicultural STEM diversity event in the country. The annual three-day event, held this year in Honolulu, is organized by the Society for Advancement of Chicanos/Hispanics and Native Americans in Science (SACNAS).

A kinesiology major and aspiring doctor, Hernandez was recognized in the category of health for his poster presentation examining the role that drug use plays in the release of dopamine from specific sites in the brain and how this affects addiction. The goal is to better understand how addictions arise to better develop prevention measures and treatment for addiction.

“It was a great sense of affirmation,” Hernandez said, “a pat on the back for all the work I’ve been doing for a long time.”

When he enrolled at CSUSM, Hernandez initially thought he might study to become a firefighter. But after going on a few ride-alongs to get a feel for the experience, he realized that he was unsatisfied with the process of simply handing off sick or injured people at the hospital. He wanted to follow them inside and see their care through to the end.

Thus did medicine enter his purview. About three years ago, Hernandez began interning at Palomar Medical Center in Escondido, and he now has logged more than 300 hours of service at the hospital, with a primary focus on patient care. He also has added duties as a medical assistant at an Escondido pain clinic for an anesthesiologist whom he met through his internship.

On campus, Hernandez’s educational road started to take shape about halfway through his time at CSUSM, when he met kinesiology professor Richard Armenta in fall 2017. Hernandez impressed Armenta, who was new to the university, not only with his command of the course material and intellectual curiosity, but also with his persistence in visiting during office hours to seek mentorship. 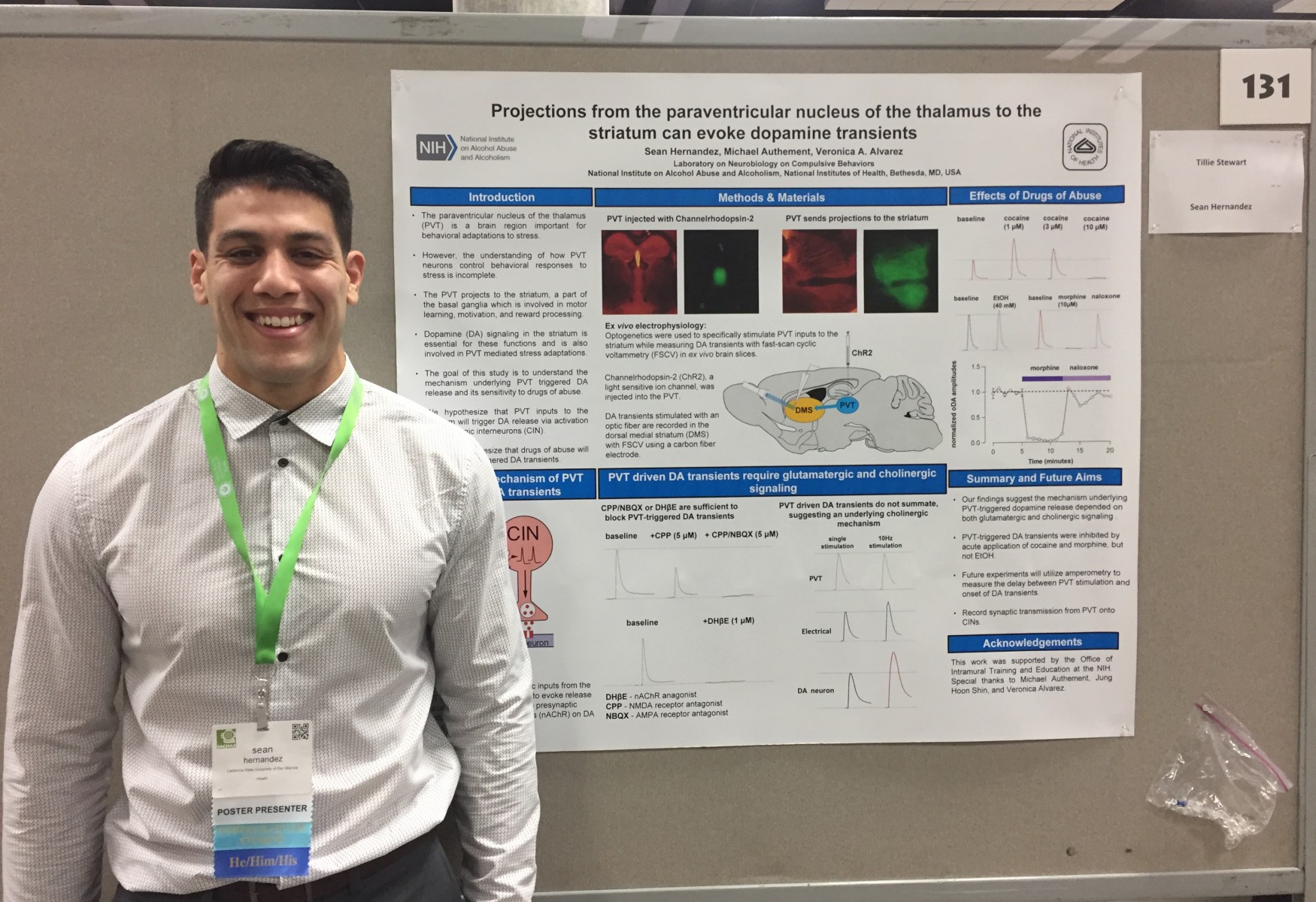 Sean Hernandez won an award for his poster presentation last month at the annual SACNAS conference in Hawaii.

At Armenta’s urging, Hernandez applied for and was accepted into UC San Diego’s Summer Training Academy for Research Success (STARS), an eight-week program that gives many college students their first exposure to high-level research. He worked on a project related to developing medications for heart attack victims, which he parlayed into a travel scholarship to attend last year’s SACNAS conference in San Antonio. He wasn’t selected to present his research, however, leaving him disappointed but determined.

“The conference is unlike any other,” Hernandez said. “You get to see people like yourself who are doing what you’re doing and have been through the hardships of coming from underrepresented backgrounds. It’s really inspiring. When my poster wasn’t accepted, it just furthered my drive to want to get back there.”

Armed with fresh resolve, Hernandez started serving as a teaching assistant for Armenta and helping him with small projects. When summer came around again, he eschewed a chance to return to UCSD and instead signed on for a 10-week research experience at the National Institutes of Health, one of the world’s foremost medical research centers.

After receiving limited hands-on opportunities the previous summer, Hernandez entered the program in Maryland with a very specific objective.

“I told them immediately, ‘Hey, I’m here to work. I moved here from California, I left everything behind, I have no distractions. I want to learn as many techniques as possible. Let me fail, and let me learn,’ ” he said.

The director of the program accommodated Hernandez’s wishes, and by the midway point, he was more or less working independently. The result of that research was his award-winning poster presentation in Hawaii.

“I strongly believe that Sean won an award at SACNAS because of his strong communication skills and ability to explain his research process and the implications of his work to anyone,” said Armenta, who attended the conference with Hernandez and six other CSUSM students. “And to watch him win was special because of how much I have seen him grow as a researcher over the past few years and because of how dedicated and passionate Sean is.”

Hernandez plans to begin applying to medical schools after he graduates in May, with Stanford – his sister’s alma mater – at the top of his list. During the gap year before he would start in fall 2021, he intends to return to the NIH for a post-baccalaureate program in which he would continue the brain research that he conducted last summer.

He aims to pursue surgery, with interests in neurology, orthopedics and cardiology.

“It’s taken me a little longer than other people to find my direction,” Hernandez said. “But now that I have, I’m grateful for that and grateful for the opportunities I’ve been given.” 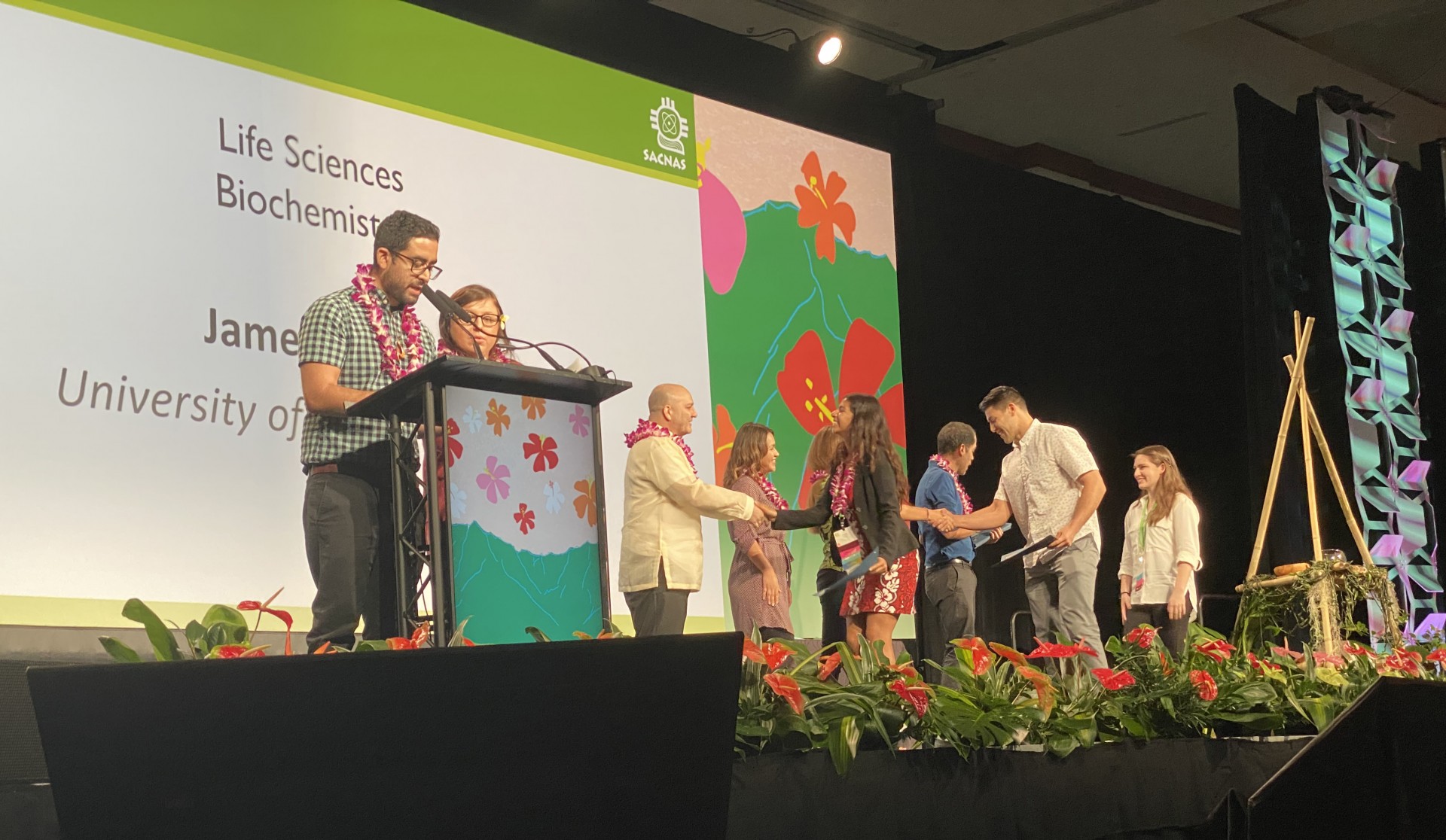 Sean Hernandez (second from right) receives his award at the SACNAS conference in Honolulu in early November.

A history major without much interest in American history, Katelyn Peterson decided to tap into her love of old Western films when taking a risk on a topic for a recent research paper for her class …
Read more

When Nicole Nutt was expelled as a high school freshman, she spent her time continuing to do the things that got her kicked out in the first place – drinking, drugs, fighting.Nutt was allowed to …
Read more
NewsCenter