They are among the best and the brightest at Cal State San Marcos.

Six outstanding graduates were honored by CSUSM President Karen Haynes at a special awards dinner earlier this month. All were recognized for their academic excellence, service to the community and overcoming myriad challenges.

The six, nominated by faculty or staff and endorsed by their college’s dean, were selected from some 2,650 students in the Class of 2015.

When Carlos was young, his farmworker parents lived in a home made of cardboard. But they never gave up their dream of a better life for their children, and they did everything in their power to make that dream come true.

Carlos didn’t let them down.

After graduating from high school, Carlos worked full-time while working to earn an associate degree in liberal studies from MiraCosta College. Struggling at first, his sense of purpose was ignited when he co-founded the Human Rights Council of Oceanside with the goal of educating local immigrant communities about their civil and human rights. Meeting with day laborers, Carlos was struck with how heartened and encouraged they were to meet a young Latino in the process of obtaining a college degree.

“As a result of these experiences, Carlos rededicated himself to his education,” said Psychology Professor Heike Mahler.

Upon transferring to CSUSM, Carlos worked in Mahler’s research lab, designing and implementing several ambitious projects, among them examining the mental health effects of intra—versus inter—group discrimination among Latinos. Once completed and published, the project will be the first quantitative study of its kind. Carlos also broke ground on a research project examining how young people communicate about substance abuse and mental health issues on social media. And he is a co-author of two manuscripts based on this research—both are under review for publication.

Carlos, president of the CSUSM chapter of the Society for Advancement of Chicanos and Native Americans in Science, has been named to the CHABSS Dean’s List every semester since he enrolled at the University. And he’s been offered the Abraham Lincoln Fellowship at the University of Illinois, Chicago, for graduate study in psychology.

“Carlos is one of the most highly recognized and successful students in the College of Humanities, Arts, Behavioral and Social Sciences,” said President Haynes. “He has taken every opportunity afforded him at Cal State San Marcos, and his academic and extracurricular achievements are truly impressive.” 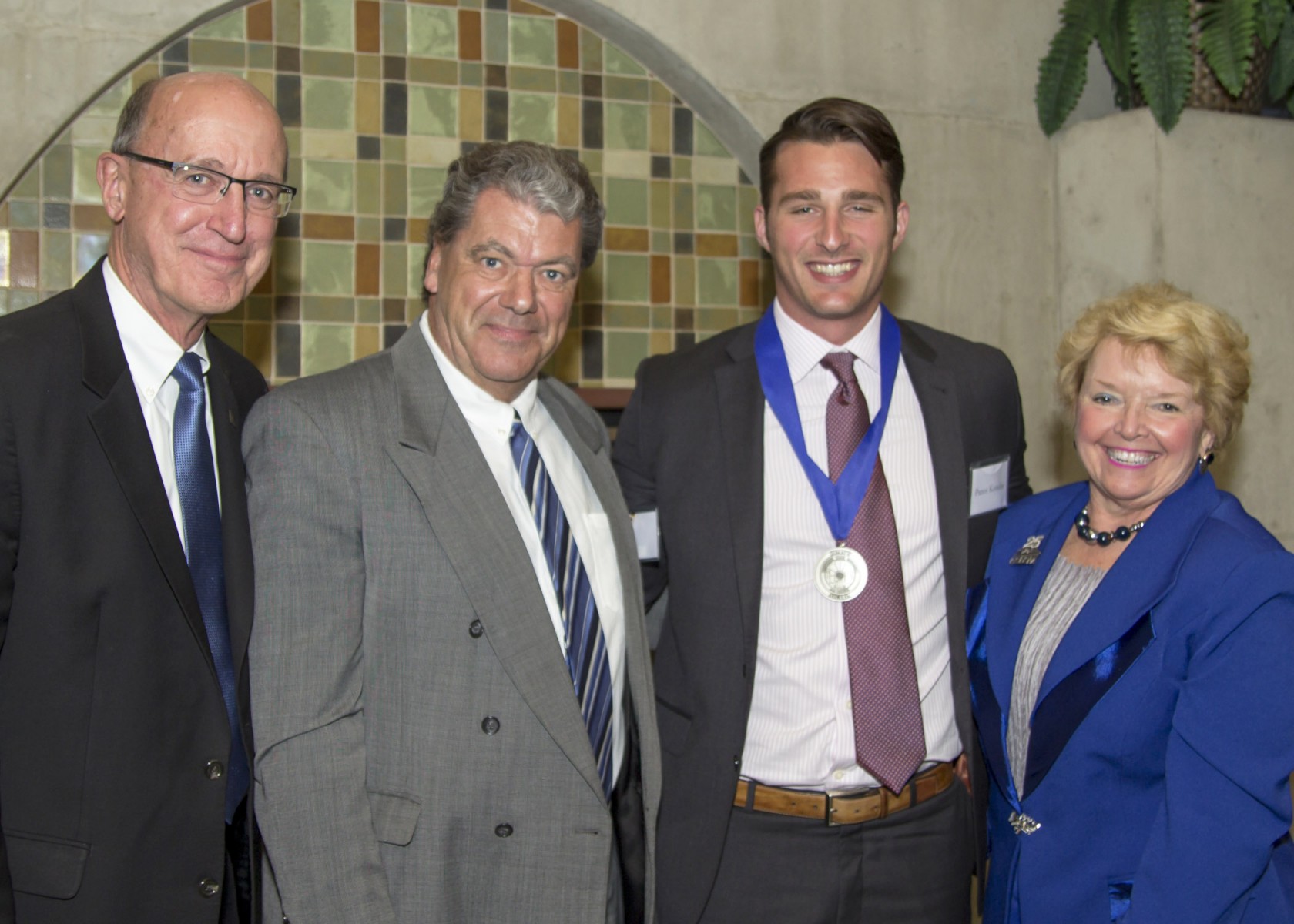 Dean’s Award for the College of Business Administration

And he is a quick study. Panos learned German just two months prior to embarking on the capstone of his studies, a six-month internship at multinational conglomerate Daimler AG in Germany. At Daimler, Kotselas earned rave reviews as he found himself working with multinational suppliers around the globe.

Has served as president and vice president of marketing for the CSUSM Global Business Management Association, where he planned and hosted bi-weekly events and guest speakers for audiences of more than 250 students. He also has played on the CSUSM men’s soccer team for four years and was named an NAIA Scholar-Athlete for two successive years. In addition, he was named an NAIA “Champion of Character” and his teammates named their annual Coach’s Award after him.

“This accomplishment does not make me content, but makes me want to push harder to achieve more of the goals and dreams I have set for myself,” Panos said. 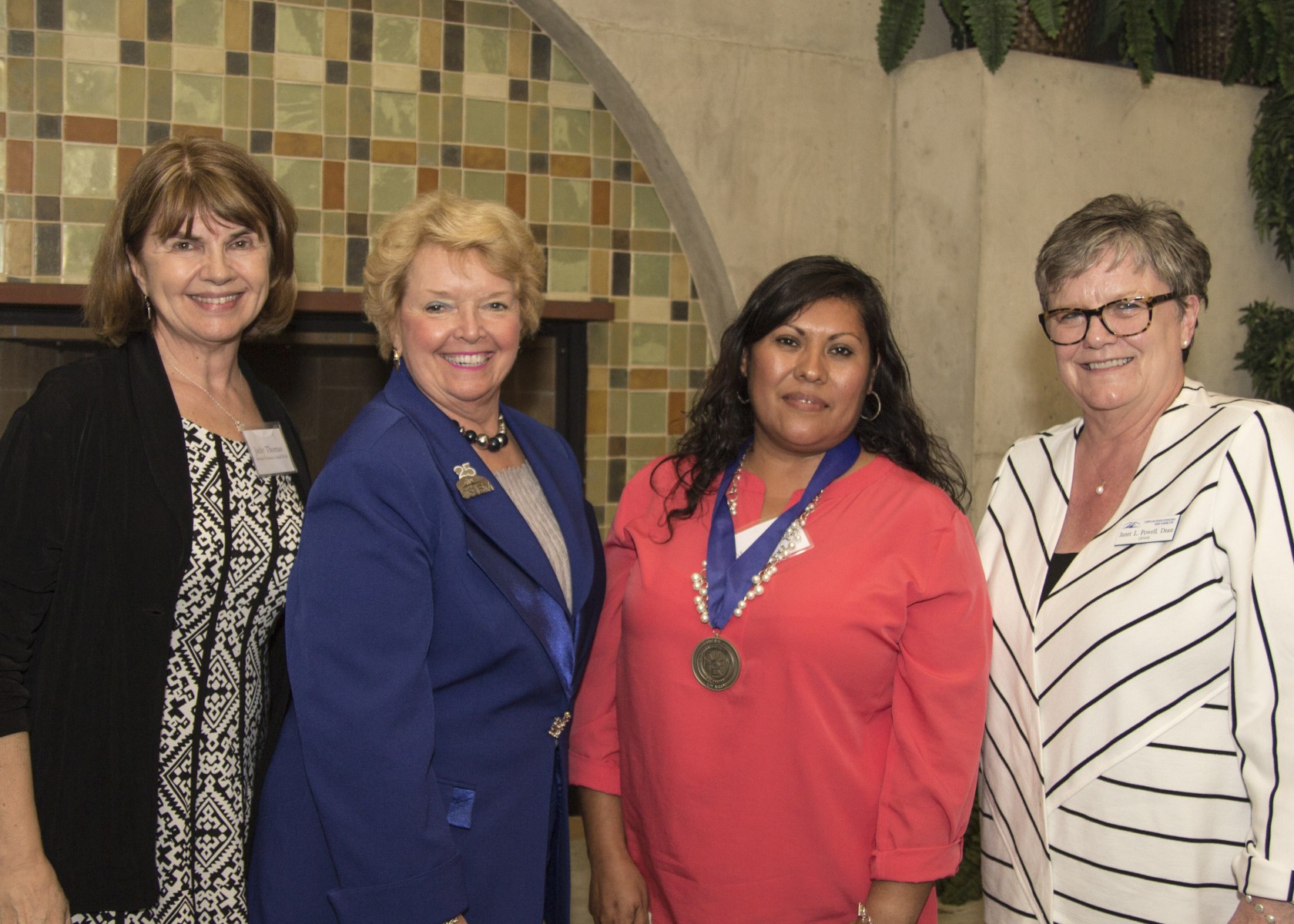 Dean’s Award for the College of Education, Health and Human Services.

Marcie’s journey epitomizes the struggle of Mexican migrant farm workers. One of nine children, she grew up in the Central Valley, where her father was employed as a seasonal farmhand. With no English-speaking skills, Marcie and her family lived in overcrowded migrant camps for several months each during the harvest.

“It was in this challenging environment where Marcie first encountered a social worker who helped her family secure basic needs,” said Jacky Thomas, a professor in the Department of Social Work. “Marcie describes this experience as a defining moment in her life—she knew at that moment that she wanted to be a social worker.

Marcie’s exemplary academic record and unfailing professional behavior are even more notable as she is raising two young sons while her husband, who is active duty military, is often deployed for much of the year. Last year, she successfully interned in a competitive, complex and rigorous field placement at the Lake Elsinore Child and Family Clinic in Riverside County.

Said Gonzalez: “I want to be able to bring about social change because I have a profound concern for individuals and society as a whole.” 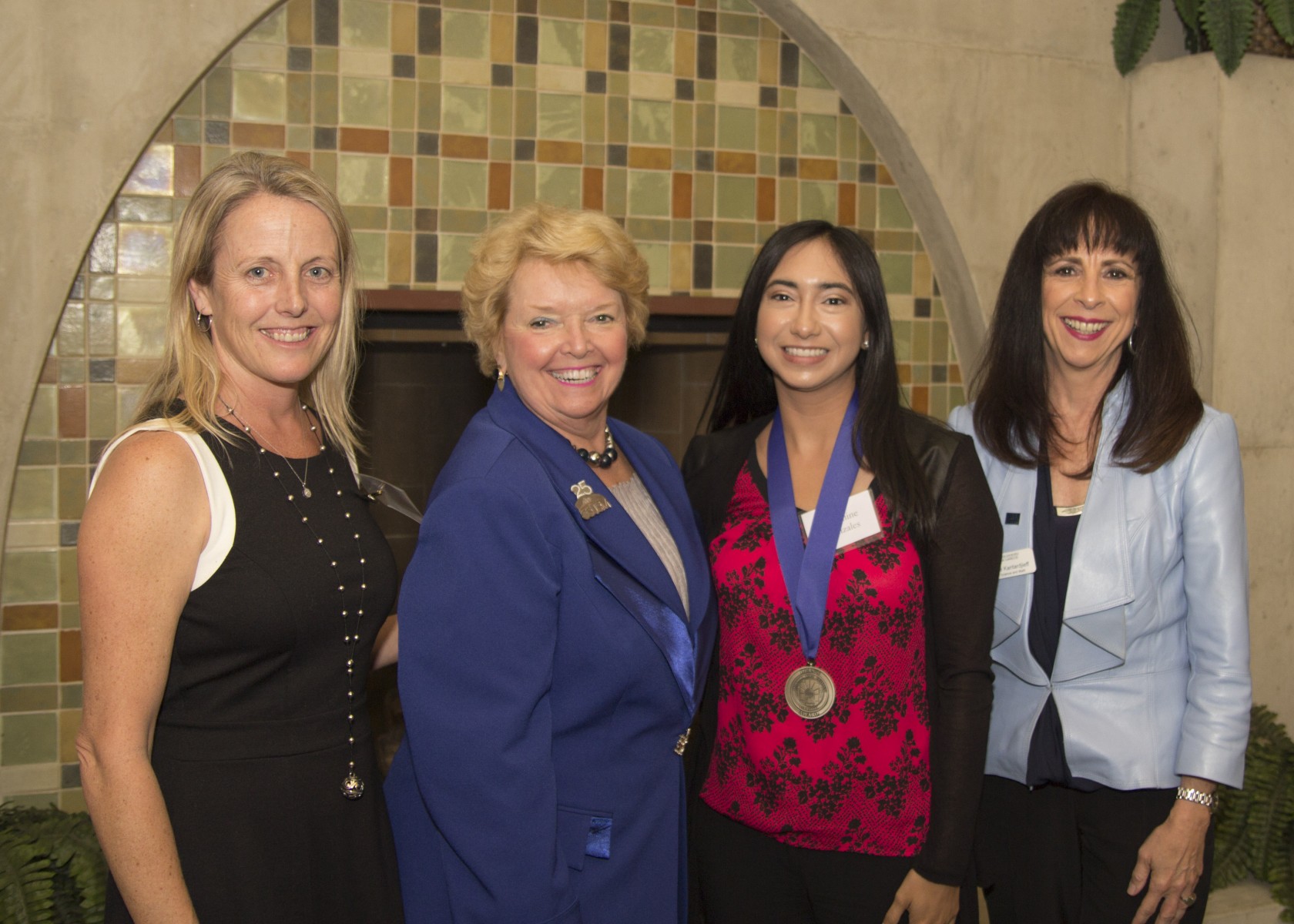 Dean’s Award for the College of Science and Mathematics

Josephine’s research is focused on solving critical issues in immuno-suppression and the impact on wound healing, and data she has generated will be submitted for publication this summer. Her research has already been presented at the National Conference of the Society for Advancement of Chicanos and Native Americans in Science; the American Association for Immunologists; and the Cal State San Marcos Symposium on Student Research, Creativity and Innovation. She also participated in a summer research internship at the University of Miami in 2013.

“Josephine is passionate about helping others to be successful in the sciences,” said Julie Jameson, an assistant professor of Biological Sciences. “She actively engages in the Learning Assistant and Supplemental Instruction Programs; in the after-school weekly STEM program at Vista Magnet Middle School; and in STEM cafés at local elementary schools. And, as if this isn’t enough, Josephine is one of our most energetic STEM Ambassadors, performing everything from classroom demonstrations, rocket launches, and hands-on lab activities to tours of the labs, STEM Center and campus.”

Gonzales is planning to pursue her Ph.D. at Cornell University.

“I hope to continue my work in helping increase diversity in the sciences and continue to promote STEM programs throughout the nation. I’d also like to continue to support diversity programs that help others, like my younger self, who do not know what a scientist does and the career path it allows.” 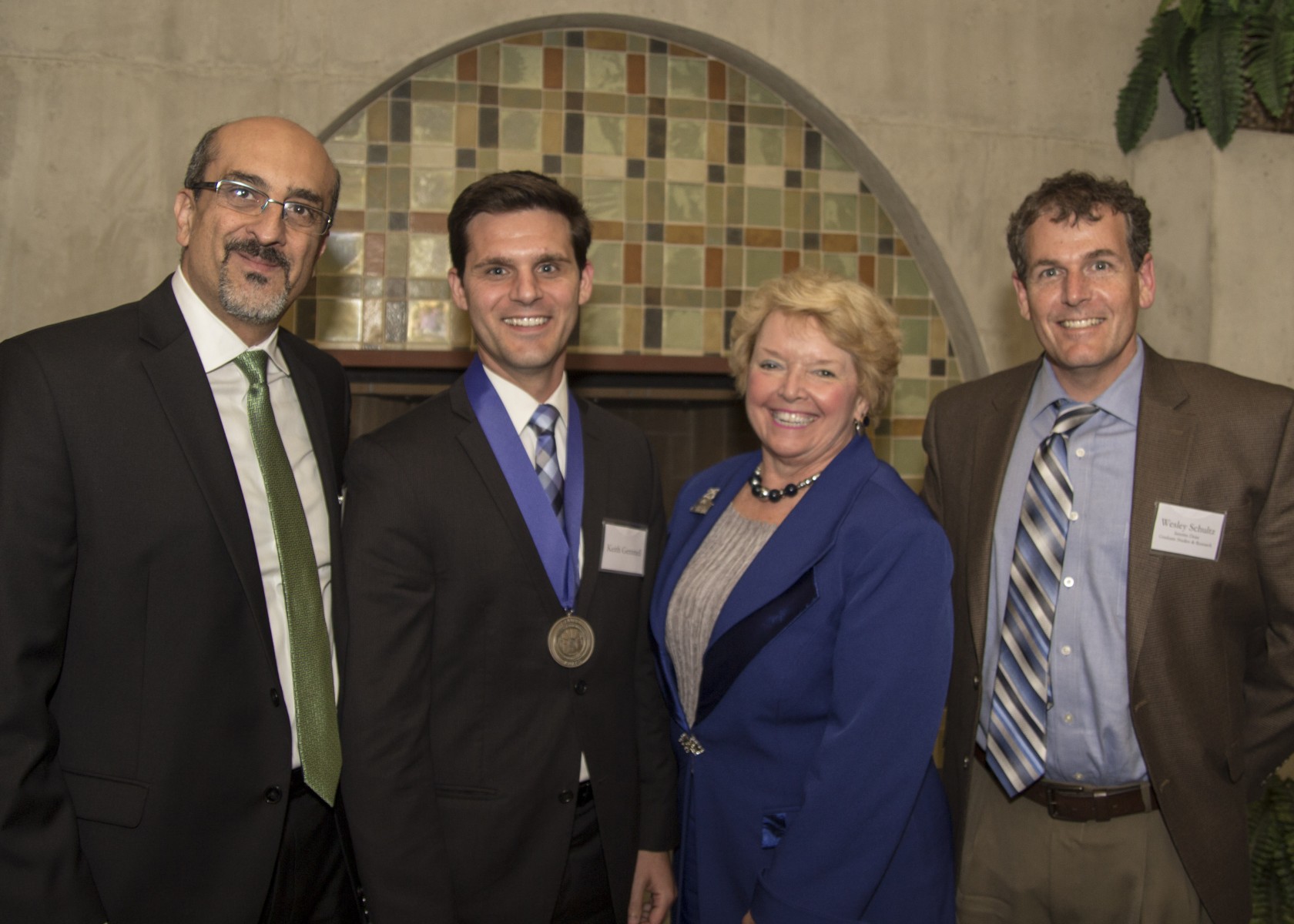 “Drawing on content from the MBA program, he was able to enhance his professional work experience, including developing marketing materials and strategies, maintaining facility budgets, negotiating contracts and agreements, and supervising event projects,” said Mohammed Oskoorouchi, associate dean of the College of Business Administration and director of Graduate Programs.

Halfway through his FEMBA program, Gemmell accepted a job as community coordinator for the City of Carlsbad, where he oversees the creation and implementation of library programs.

“For me the greatest accomplishment I take away from my graduate school experience is proving that my parent’s hard work to raise six boys was worth it,” Gemmell said. “They are deeply proud of my accomplishment to be the first in our family to complete a master’s degree and even more proud of the enhanced husband and father I have become.” 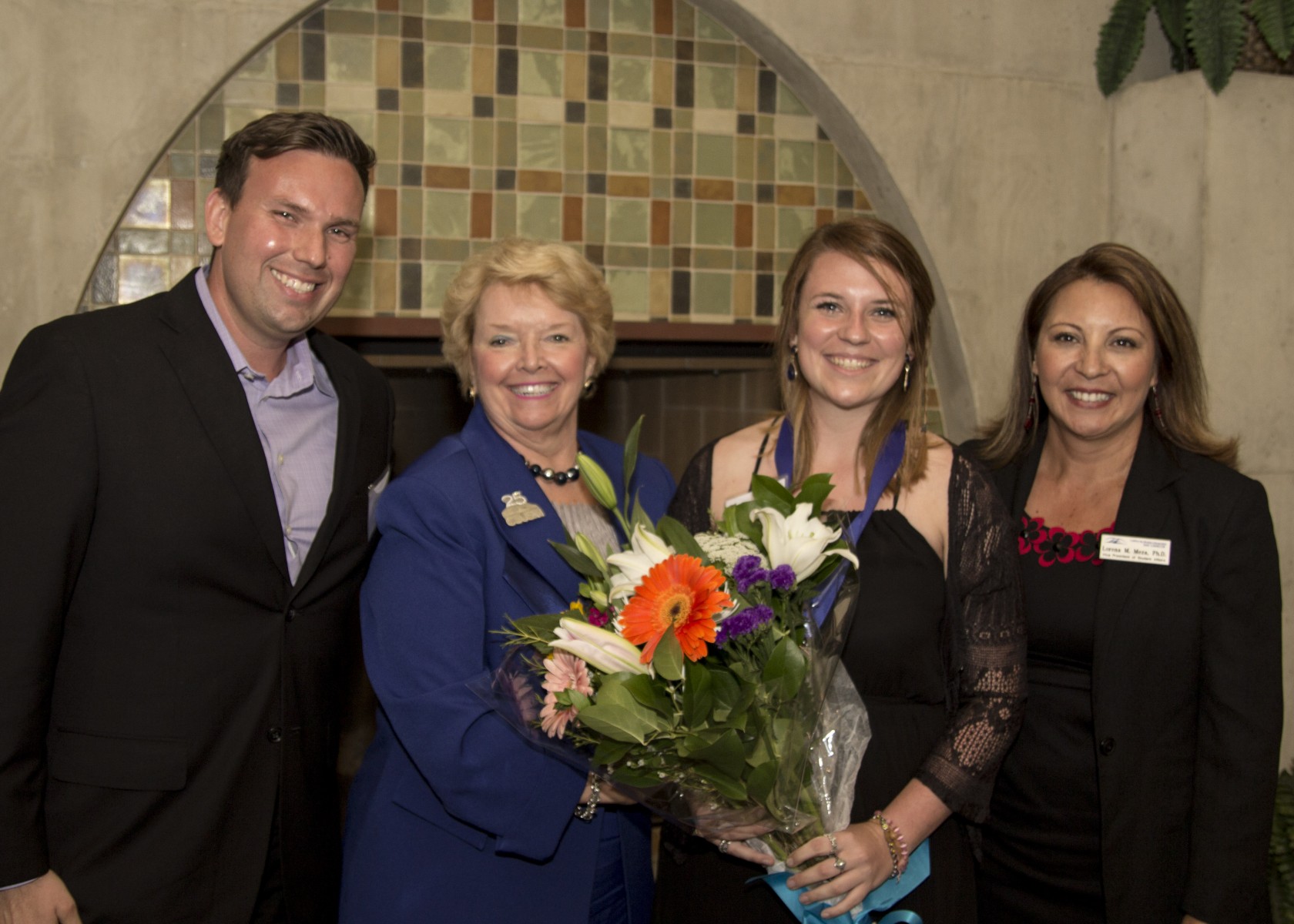 The Dean of Students Award for Outstanding Leadership is given to a graduating student who, while maintaining excellence in academic achievements, has also exhibited leadership through student-centered service, inclusiveness, teamwork and innovation. Perko has been elected to several positions in student government and currently serves as President and CEO of Associated Students, Inc., where she oversees a $1.2 million budget benefiting student life and activities at CSUSM. In addition, she has been a Resident Advisor for two years in University Housing and is actively involved in her sorority, Alpha Omicron Pi, as activities chair. She’s also a member of the Kinesiology Club.

“Haley has demonstrated the true spirit of `servant leadership’ by finding the time and energy in her busy schedule to volunteer for multiple community service projects, such as Donate, Don't Dump; Habitat for Humanity; and the American Cancer Society's Breast Cancer Walk,” Said Christian Chavez, assistant resident director at University Village.

Perko will be moving to Austin to work with AmeriCorps.

“Being a leader is about making a difference and encouraging others to become leaders themselves,” Perko said. “We all have a say, and we all can make a difference. Sometimes we just need that extra push to realize our individual potential.”