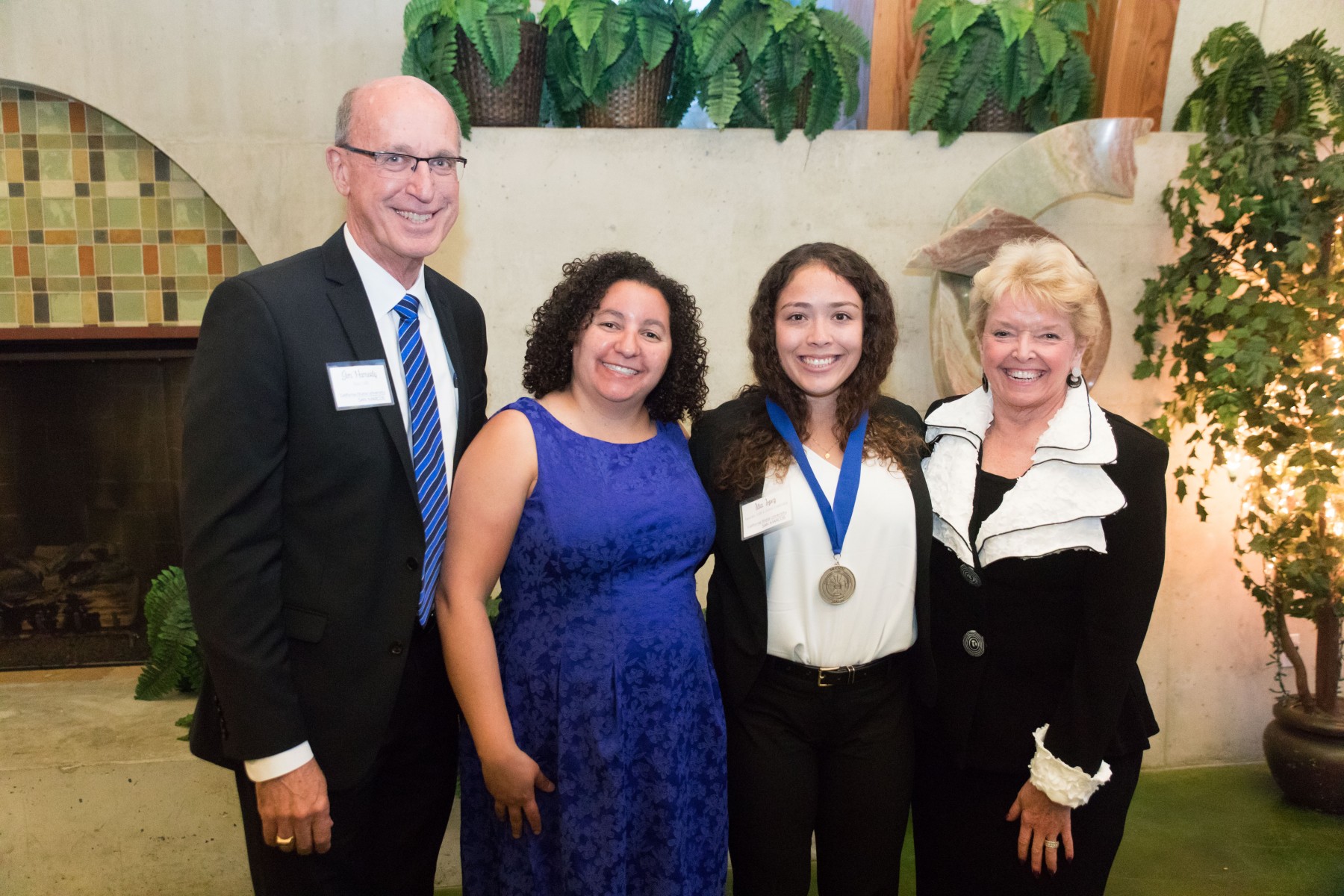 More than 3,500 students are expected to graduate from Cal State San Marcos this month. On May 1, five standouts from the Class of 2018 were honored at a special awards dinner to celebrate their achievements.

Honorees were nominated by faculty or staff and endorsed by their college’s dean. Here is a closer look at each award recipient:

Lilia was not just a student leader at CSUSM. She showed that she truly cares about her fellow students and their future success.

Through her work with the Latino Business Student Association and the Cougar Career Closet, Lilia provided resources for students that will not only help them achieve their goal of receiving a successful college education, but will also increase their chances of finding a job.

Lilia’s drive and determination has turned the LBSA into a thriving student organization helping future Latino leaders by offering employment opportunities, mentorships and useful workshops. The student organization’s success is largely due to Lilia’s role as marketing director as she helped increase membership and engagement of its members.

Lilia was also at the heart of the success of the Career Closet, which provides professional clothing for students throughout the University who may not be able to afford or obtain proper attire for career or professionally related events. She led the effort to launch the closet by organizing all the documentation, designing communication materials and physically sorting through the donations and setting up the room.

Through Lilia’s efforts, a space was allocated in the Career Center, and a College of Business Administration grant funded clothing racks, hangers and shopping bags.

Lilia also mentors students through LBSA’s recently implemented ambassador program in which students interested in graduate school are trained by current members of the student organization. Through this experience, she has discovered her own leadership style and improved her leadership skills.

Last semester, when Lilia and her team delivered a presentation to the City of San Marcos, the city manager questioned whether Lilia and her classmates were truly students due to their professionalism and the quality of their recommendations. 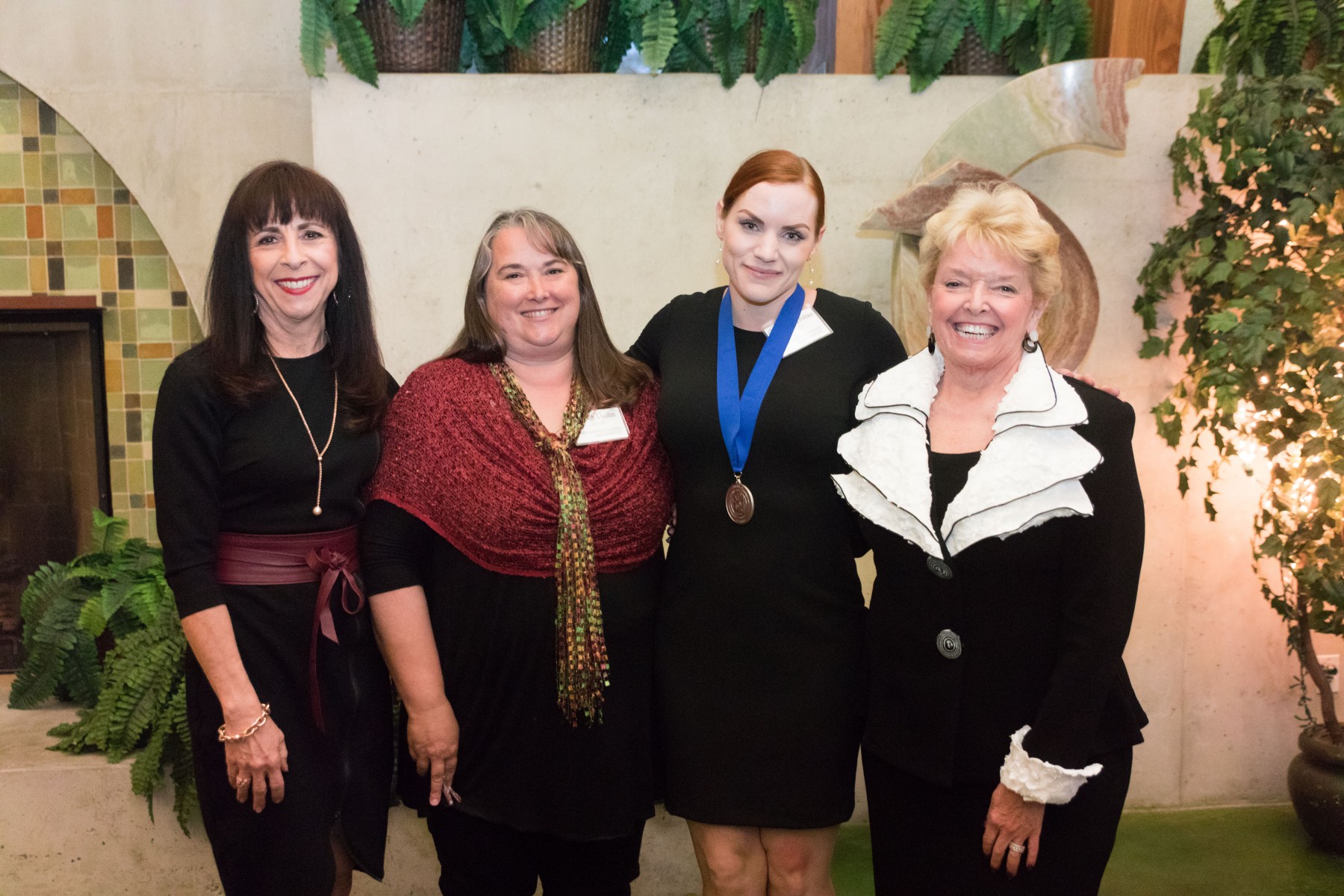 Growing up in Sweden, Veronica’s father stressed the importance of a good education. Even though he never attended high school, he wanted his daughter to have a better life. Veronica was 12 years old when he died, and her dreams of higher education faded after his death.

After graduating from high school, she traveled to the United States where she met her husband, who encouraged her to return to school. It only took one semester before Veronica realized that she was in the right place. She finally felt like she was headed toward a meaningful future.

Veronica is the first in her family to graduate from college. When her grandmother lost her battle with cervical cancer, Veronica volunteered for the American Cancer Society’s Discovery Shop to honor her grandmother’s memory. Spending time around cancer survivors and later around cancer patients during an internship at Palomar Hospital helped her develop a deep admiration for those affected by disease. She intends to pursue a medical degree in psychiatry.

Veronica excelled in the classroom at CSUSM, graduating with a 4.0 grade-point average despite a challenging course load. 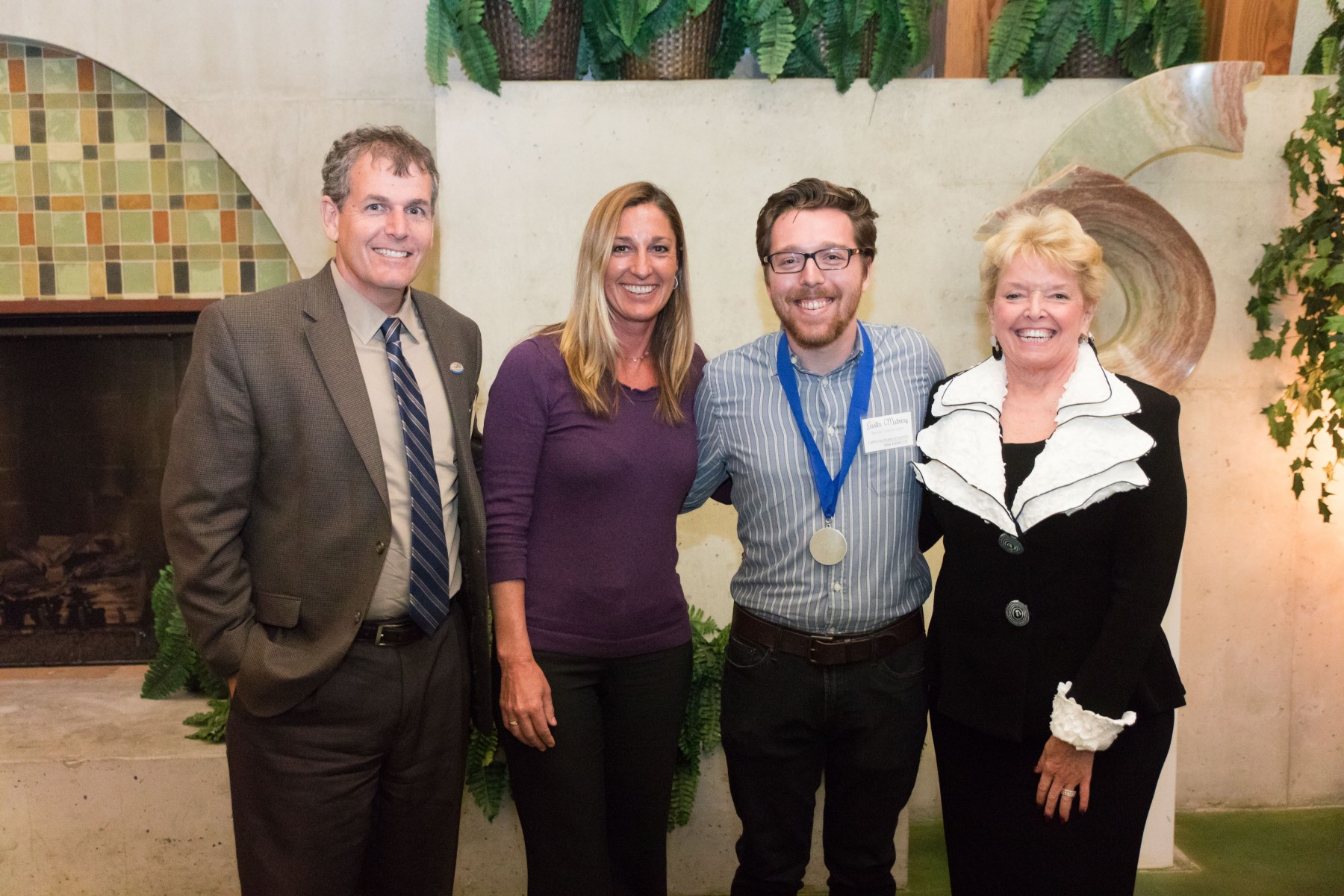 Justin will graduate with a 4.0 grade-point average, putting him in elite company. Of the 54 graduate students who have gone through the mathematics master’s program, only two others have achieved this feat.

Justin changed majors twice as an undergraduate, starting in literature and writing studies before moving to economics. He began taking mathematics courses to better prepare for graduate school and discovered an aptitude for proof-based and applied mathematics courses, leading him to switch to a mathematics major. Through his studies, he has obtained a solid foundation in theoretical subjects such as analysis and topology, and their applications to fields like probability theory, optimization and numerical analysis.

While at CSUSM, Justin has also taken the opportunity to teach. Each semester, he was selected for a Graduate Teaching Assistantship. In this role, he assisted professors teaching upper division courses by grading, lecturing and holding office hours. These experiences strengthened his understanding of fundamental mathematical subjects and allowed him to grow as an educator.

Justin will pursue his Ph.D. in Data Science and Operations at the Marshall School of Business at the University of Southern California. His goal is to become a professional academic researcher, using mathematics to study complex problems arising in operations research. 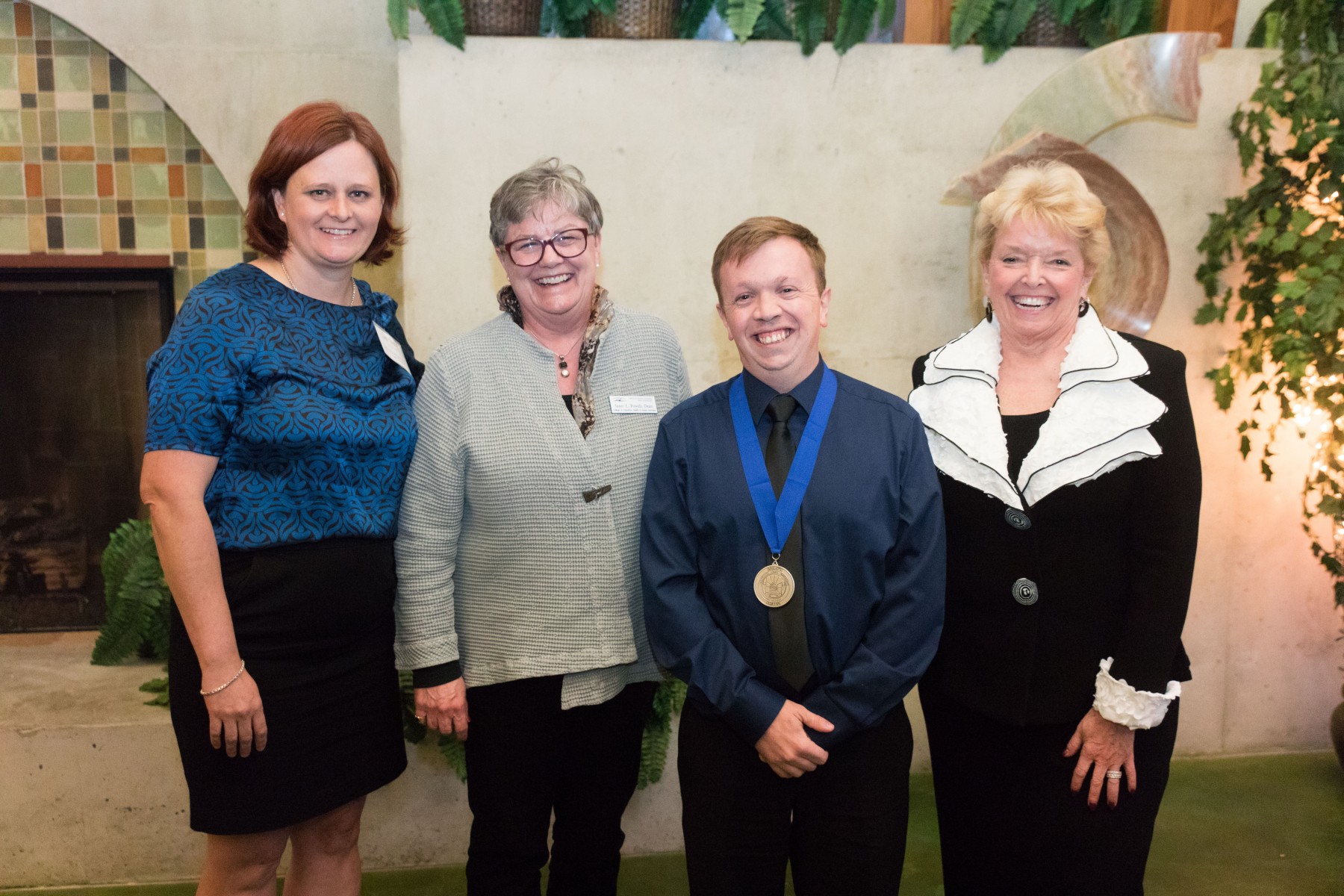 Tomas persevered despite a challenging journey to graduation. Seemingly endless doctor’s appointments and surgeries due to medical issues and physical disability limited his access to education. He has endured 73 surgeries in his life. Through these experiences, he was inspired to support students who, like himself, required a special type of teaching and support.

Tomas said he has received tremendous support over the years from family, educators and CSUSM’s Disability Support Services. This has encouraged him to take every opportunity to “pay it forward” by helping children in the community with disabilities and health needs.

After receiving his bachelor’s in human development in 2013, Tomas worked as an instructional aide for children with disabilities. This is where he discovered his passion to become an education specialist and he returned to CSUSM for his Multiple Subject and Mild/Moderate Education Specialist teaching credentials.

Tomas’ master’s is focused on special education. An education specialist at Rancho Buena Vista High School, he is researching nutrition and how it can support children with autism. His goal is to create a guidebook for parents and teachers that will help support children through diet and nutrition. He hopes to develop this guidebook into a professional development opportunity for educators. 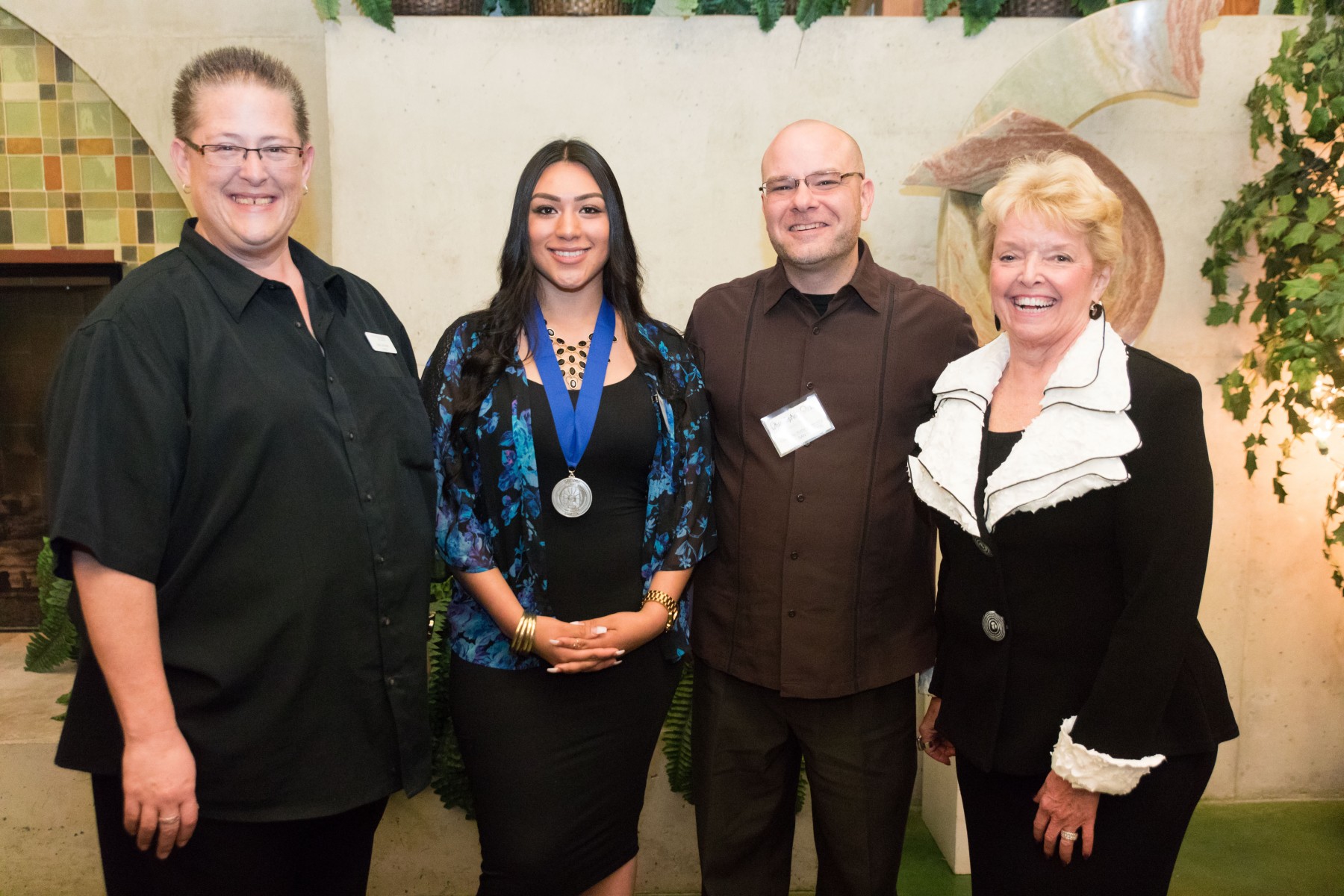 Yomira was honored for her academic achievements, her service to CSUSM and her commitment to enhancing the communities in which she lives and works.

Earning a bachelor’s is just the beginning for Yomira. She plans to attend law school and plans to advocate for people of color and transnational immigrants.

During middle school, Yomira saw how her brothers were funneled into the school-to-prison pipeline. She felt helpless because she was uneducated about the legal system. When her father was deported, she was forced to cross the border every day in order to graduate high school. It is her struggle to be with her family that has motivated her to persevere and fight for her educational dreams.

At CSUSM, Yomira has immersed herself in student organizations. She was elected by the student body to serve as the vice president of Student and University Affairs on the ASI Board of Directors. In this role, she founded the Lobby Corps, an organization for students with a passion for advocating for higher education policy.

April Dawson came to Cal State San Marcos to study biotechnology. She left with a mission — and a viable method — to help feed the world. After earning a bachelor’s degree in biology from Idaho State University, Dawson saw the Master of …
Read more

Last month, there was a changing of the guard atop Associated Students, Inc., at Cal State San Marcos.  Of course, the fact that the transition happened virtually because of the coronavirus pandemic is merely the most obvious sign that this won’t …
Read more

Kiya Pasley is grateful for the support she has received during the COVID-19 pandemic – both financial and from her professors at Cal State San Marcos. In fact, Pasley may not have learned about some of the financial assistance available were it …
Read more
NewsCenter