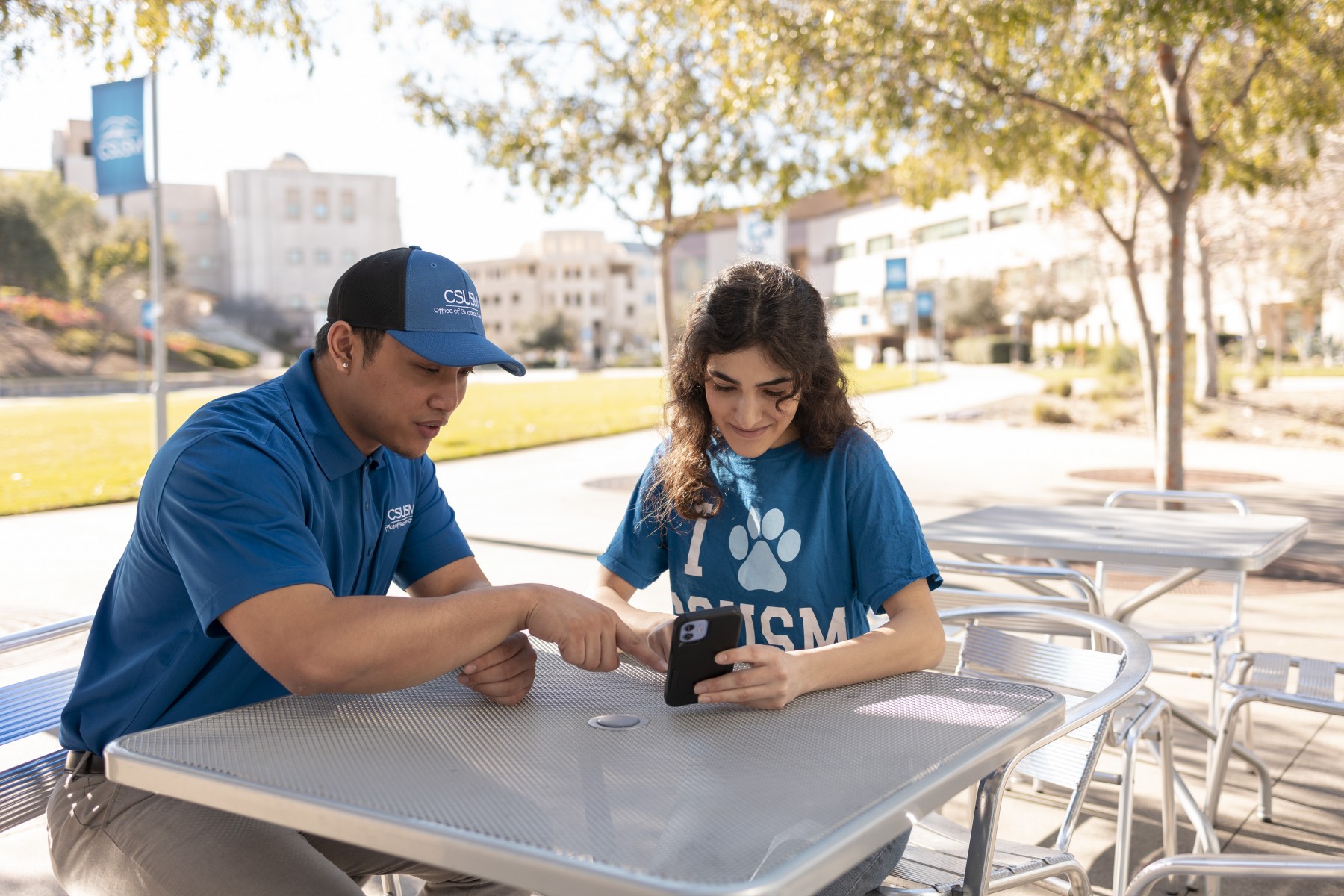 Joshua Foronda knows all too well the struggles that many freshmen face as they adjust to college.

Foronda failed multiple classes during his first year at Cal State San Marcos, landing on academic probation with a 0.6 grade-point average during the spring of his freshman year and contemplating dropping out of school.

But Foronda is nothing if not resilient, and his GPA climbed to 3.3 by the time he graduated in 2018 with degrees in criminology and justice studies and sociology.

Today, Foronda uses his experiences as an undergraduate to help a new generation of CSUSM first-year students in his role as a student success coach for the burgeoning Office of Success Coaching.

“Students feel like it’s the end of the world when their grades are not on point,” Foronda said. “But I tell students that every setback leads to a bigger comeback.”

The Office of Success Coaching is transforming the way CSUSM serves first-year students, providing personalized support services to ensure that newly admitted students thrive. Launched during the pandemic, the program already has garnered national attention for its innovative approach, with CSUSM receiving the 2021 American Association of State Colleges and Universities (AASCU) Excellence and Innovation Award for Student Success.

AASCU, which includes nearly 400 state-supported colleges and universities throughout the country, honored the Office of Success Coaching for its outstanding results and potential to influence and serve as a model for other institutions.

“There's so much pressure and students are trying to be so many things to so many people,” said Valita Jones, the office’s founding director.
“The Office of Success Coaching gives them a pathway.”

The concept and framework for what would become the Office of Success Coaching was in place before the pandemic, with Jones – then serving as CSUSM’s director for recruitment and outreach – using grant funds to acclimate first-year students to college life. But the onset of COVID-19 accelerated plans and helped shape the program.

Jones met with CSUSM President Ellen Neufeldt in the early days of the pandemic to share details about the onboarding program she was overseeing. And Neufeldt took the opportunity to tell Jones about the success coaching program at Old Dominion University, where Neufeldt served as vice president for Student Engagement and Enrollment Services before coming to CSUSM in 2019. Neufeldt wanted to bring a similar program to CSUSM and saw opportunity in the work that had already been started.

As the Office of Success Coaching was formally launched, one of the first moves was bringing Jay Franklin, the director of recruitment and customer relationship management administrator for Extended Learning, aboard as the program’s associate director – and it didn’t take much convincing to get him to join the effort.

“It was a dream,” Franklin said. “I said, ‘This is a job? You're going to pay me to do something that I have always dreamed about doing?’ I don't even call it a job. This is a purpose.

“We’re not just there academically for students; it's personal relationship-building. And the end goal of any degree at Cal State San Marcos is not just the degree, it’s to help them understand how to network and connect.”

With some departments and programs unable to provide normal offerings early in the pandemic, nearly two dozen employees – including staff from athletics, campus recreation and events, among others – were redeployed to help launch the Office of Success Coaching. Sherri Watson, the executive director for Old Dominion’s Career Development Services and Coaching, was brought on as a consultant to train CSUSM’s success coaches and prepare them to work with students.

From left to right, Jay Franklin, Mark Taylor and Julieana Corona are part of the Office of Success Coaching Team. Photo by Andrew Reed

While some of the original student success coaches have returned to their former roles, the remaining team (which now includes graduate interns) works in a similar manner to a life coach. They start at the beginning of the student life cycle and aim to solidify a structured pathway for students to reach their end goal, which is to both earn their degree and pivot into a career. That includes helping students set goals, reminding them about important deadlines, and having general conversations about aspirations.

Those conversations proved invaluable for Priscilla Al-Rayes, a criminology and justice studies student. Foronda was assigned as her success coach, and his persistent emails eventually prompted Al-Rayes to make an appointment. Their discussions covered everything from academics to time management to life skills. When Al-Rayes asked Foronda for his thoughts about joining CSUSM’s Orientation Team, which assists with campus tours and orientation sessions for new students, Foronda was able to share his own experiences as an O-Team member and even helped prep Al-Rayes for the interview.

“No one knows what college is going to be like until you’re actually in college,” Al-Rayes said. “Your success coach is here to push you through that and get you to where you need to go.

“I’m someone who needs that personal experience to understand something, and having a coach who has that personal experience to share is probably the best thing about the Office of Success Coaching. He’s already been through it all and I’m just starting, so I know almost exactly what to expect by talking to him. That really has eased my anxiety when applying to things and going to events and things like that.”

Foronda takes pride in sharing with his students how he practices what he preaches. When he encourages students like Al-Rayes to build connections with professors and staff, he also tells them how the relationships he developed as a CSUSM student led to recommendations from people like Annie Macias, executive director of Associated Students, Inc., and Floyd Lai, director of the Cross-Cultural Center. Now Foronda proudly calls them colleagues.

It’s not difficult for Foronda to relate to the students he mentors. Sure, he’s only a few years removed from receiving his bachelor’s, but he too was navigating school, work and family during the pandemic like so many of them. In May 2021, he received his master’s in counseling from San Diego State.

“When I graduated, I sent all my students a video and said, ‘Hey, this is going to be you in a few years.’ I wanted to let them know that if I can do it during the pandemic, I know they can, too.

“One thing I’ve learned: It takes a village to raise a child, but it takes a university to graduate a student.”