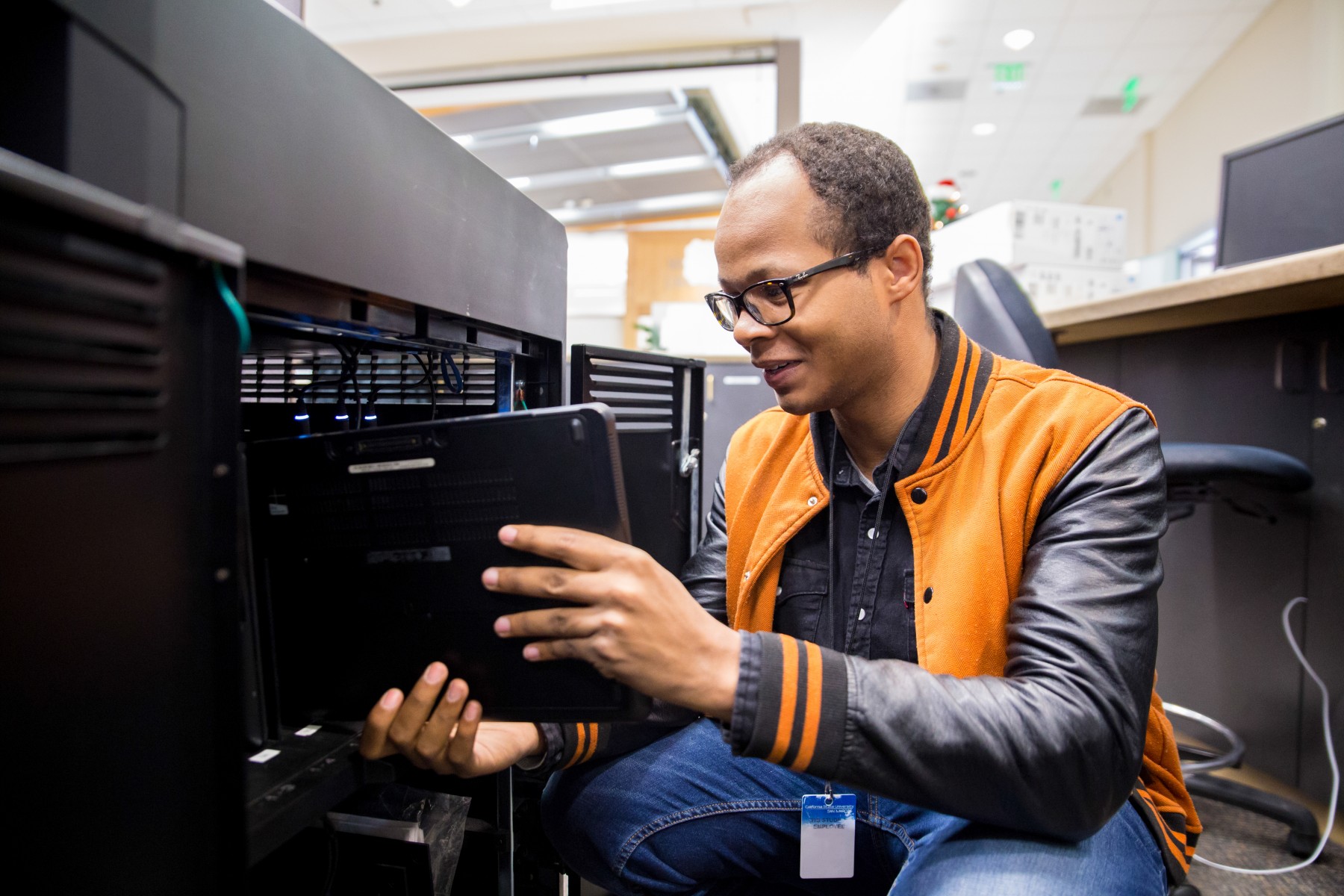 Despite her encouragement and his desire to pursue higher education, there was still the matter of preparing for the rigors of college as a first-generation student.

As Damien began applying to schools, he received an email that would change his path. It was from ACE Scholars Services, which supports former foster youth at Cal State San Marcos.

“ACE helped me ease into the college transition,” Damien said. “Back in Moreno Valley, my foster mom always told me I needed to go to college. But no one in the family went to college so no one knew how to prepare me. I knew what I needed to do grade-wise, but from that point it was ACE guiding me on the next steps.”

Damien completed those next steps, graduating from CSUSM in December with a bachelor’s in computer science.

“Damien is an inspiration,” said Jim Mickelson, the founder and director of ACE Scholars Services. “He had to face some incredible barriers to reach his goal, but he never wavered from his dream. His story is the story of CSUSM.”

Now Damien is preparing for a new adventure – a move to Tokyo where he will work as a front-end developer for Togo Securities.

Taking a beginning course in Japanese at CSUSM led Damien to spend a year studying abroad in Japan.

Damien immersed himself in Japanese culture while studying abroad, even choosing not to live in a dorm with other English speakers so he could better learn the nuances of the language.

The time he spent in Japan fueled a desire to return, and Damien continued to study Japanese when he returned to CSUSM, always with the plan to pursue his dream of moving there after graduation. But those dreams nearly were derailed two years ago after the death of his foster mother.

“I had no motivation to study and do schoolwork,” he said. “Even though I was seeing the counselor, grade-wise everything was dropping. Combined with what had happened, I thought I was going to have to drop out of school.”

Damien said Mickelson got him the help he needed so that he could continue working toward his degree.

“He knew something was wrong,” Damien said. “At the time, I didn’t want to talk to anyone, but I’m thankful for it now.

“I had no idea how much support I would get from ACE when I came to CSUSM. I thought I’d be able to come in and talk to them, but it went way deeper than that.”

Said Mickelson: “It has been a joy working with Damien. He is a special young man who will go far.”

Damien also credits computer science professor Rika Yoshii not only for helping in his studies, but also for providing valuable advice on landing a job in Japan. Damien, who worked in CSUSM’s Instructional & Information Technology Services department for most of his time at the University, said Yoshii recommended that he visit Boston for a job forum that includes numerous Japanese companies.

By the time he returned from the forum, Damien was receiving emails from Japanese recruiting companies attracted by his skill set.

As he prepares to embark on a new chapter in his life, Damien is grateful for his time at CSUSM.

“There was a time when I thought I wouldn’t make it,” he said. “I’m thankful I was able to get to this point.”