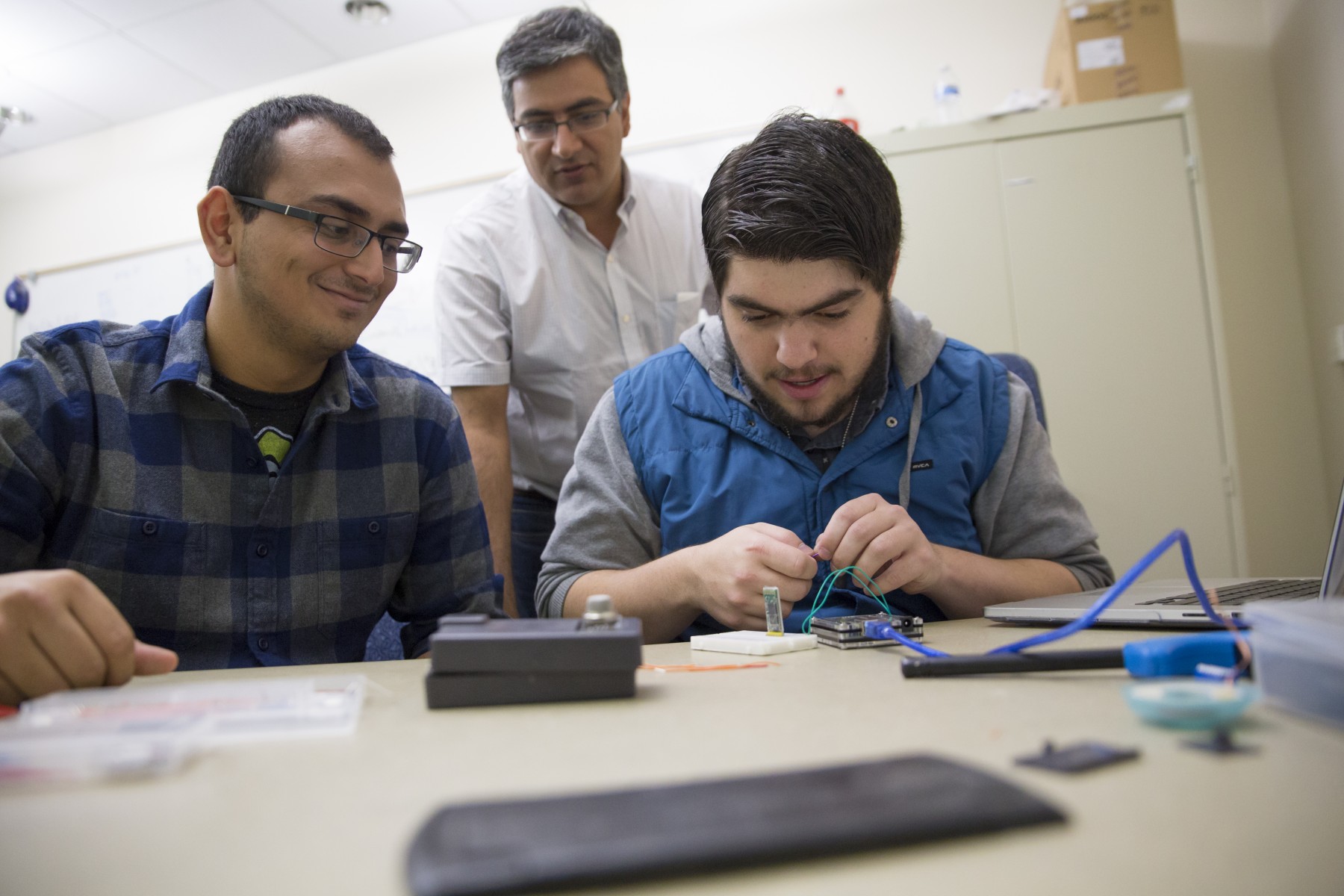 Want to quickly measure the level of air pollution inside a building? There’s an app for that.

Or there will be soon, thanks to a grant-funded research project led by Dr. Ali Ahmadinia, a professor in the Department of Computer Science at Cal State San Marcos, and three of his students, Jorge Chavez, Michael Le and Greg Farinelli.

What does the project entail?

“We are in the process of developing a prototype that would provide localized, real-time information about indoor air quality on a cellphone app,” Ahmadinia said. “There is a lot of work to be done, but we have built an initial working prototype so far.”

Success may be a matter of life and death.

The World Health Organization estimates that one in eight deaths worldwide are linked to air pollution – both indoor and outdoor, and recent data shows a strong link between air pollution and cardiovascular diseases and cancer, not to mention respiratory ailments. Strokes account for 34 percent of indoor air pollution-caused deaths, and 26 percent of coronary artery disease, according to the 2014 WHO report. As people spend more than 80 percent of their time indoors, their total exposure to most air pollutants largely depends on their indoor exposure. Indoor pollutants include gases such as nitrogen dioxide, ozone, carbon monoxide and carbon dioxide. Besides the potential deadly effects, poor indoor air quality can reduce productivity and impair student learning.

Launched in April 2016 through a $20,000 grant, the goal of CleanAir: Mobile Crowd Sensing for Indoor Air Quality Monitoring is to create a crowd-sensing system using a set of sensors to measure air quality and monitor the concentration of pollutants, resulting in AMBER alert-style warnings to people in the area when carbon dioxide levels are too high. In addition, CleanAir will store data collected by individual devices on a central server, enabling schools and property management companies to track the level of exposure and take actions to reduce exposure when necessary.

Jorge, Michael and Greg jumped at the opportunity to work with Ahmadinia when they learned of the research project.

“I saw this as a great opportunity to enhance my skills in embedded systems, working with sensors and writing code,” said Greg, a senior majoring in computer science who has been putting in about 40 hours each month on the project. “A good learning experience that is enabling me to build my skills in working with sensors of all types and calibrating them to make sure we’re getting reliable readings. We’re expanding our knowledge quite a bit.”

Ahmadinia, who earned his Ph.D. in 2006 from University of Erlangen-Nuremberg, Germany, has worked as a research associate with the Electronic Imaging Group of Fraunhofer Institute - Integrated Circuits in Erlangen, Germany. He also served as a research fellow in the School of Engineering and Electronics at the University of Edinburgh, and he came to CSUSM from

Glasgow Caledonian University, where he was a senior lecturer in embedded systems. He has worked with several companies on design and development of low power sensor devices for deep sea oil and gas pipeline monitoring systems and smart building energy management systems.

The project is in partnership with Venuetize LLC, a mobile-first venue platform as a service company specializing in Internet-of-Things and contextual awareness. Dr. Nimish Shrivastava, an adjunct faculty in CSUSM’s Department of Computer Science, is supporting the project as the Chief Technology Officer at Venuetize.

“It’s been an amazing experience,” said Michael, who added the insights he’s learning about embedded systems, Bluetooth technology and the intricacies of sensors has been invaluable.

“I’m glad I had the opportunity to work on this project,” Greg added. “Dr. Ahmadinia is really a great mentor and an incredible teacher.” 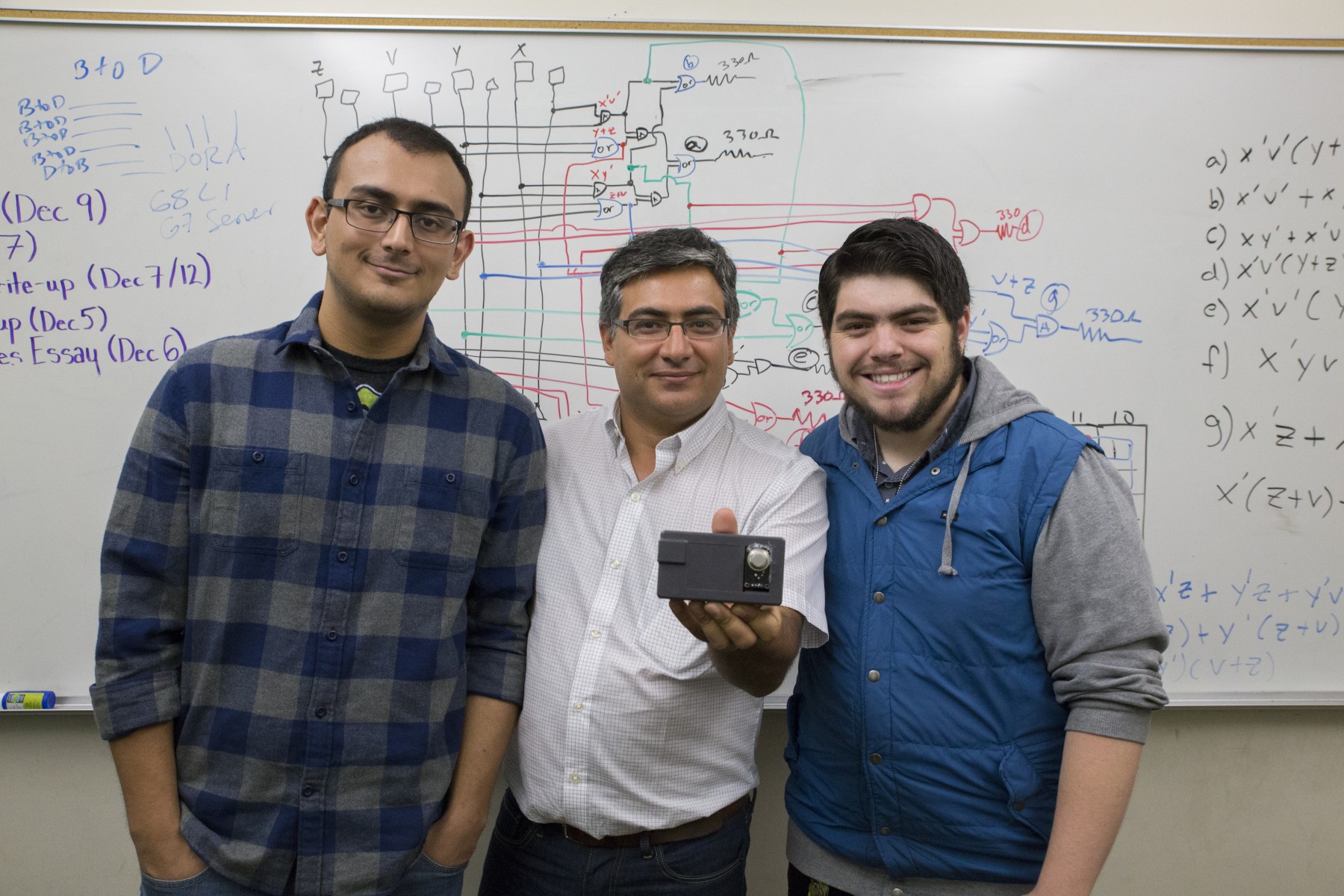