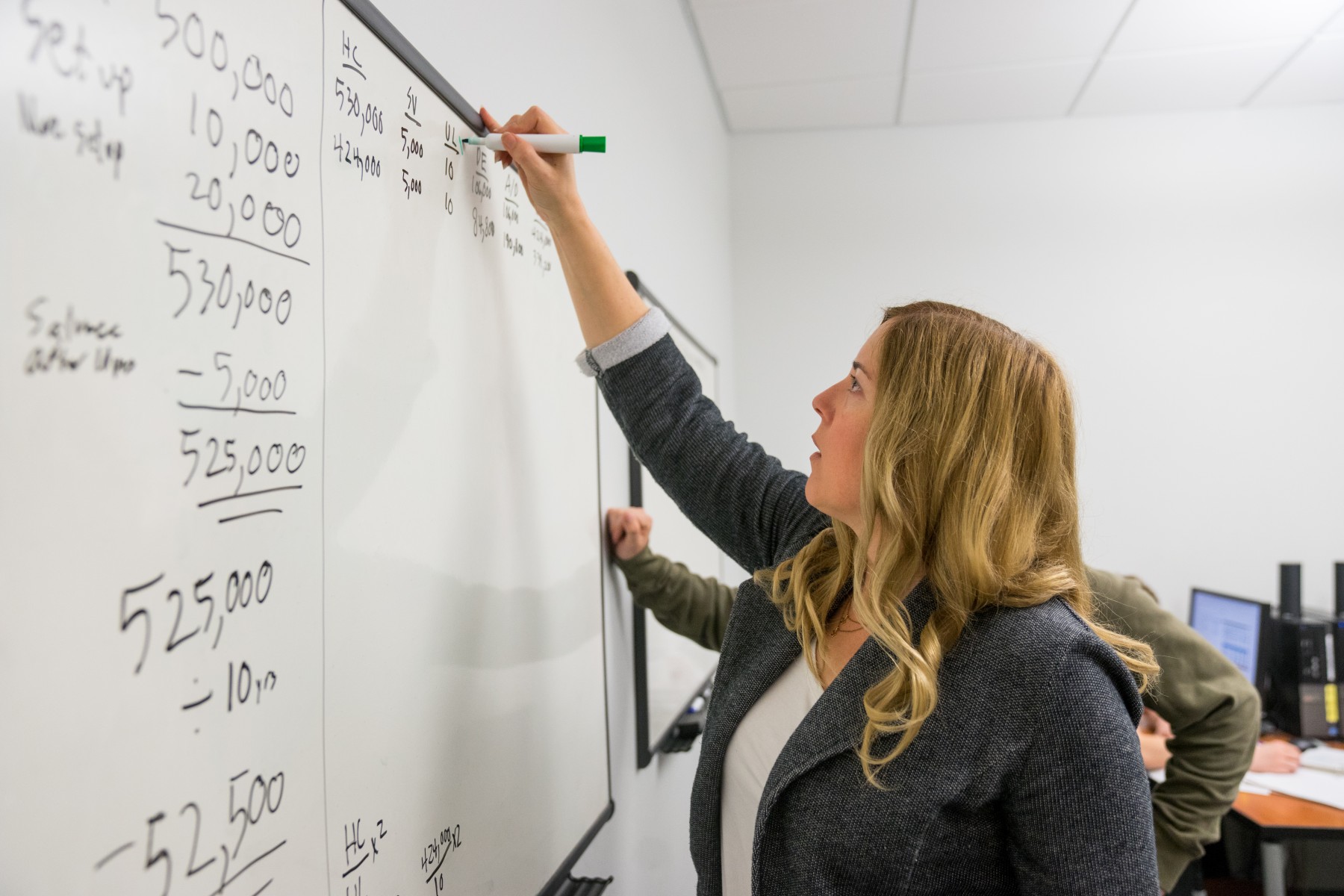 Alisha Blush
The returning student won the dean's award as the outstanding graduate from the College of Business Administration. Photo by Chandler Oriente

When she returned two decades later, she was a woman on a mission, an accomplished professional and cancer survivor who knew exactly what she wanted from the experience and knew she had no time to waste.

The divergence in motivation led to drastically different outcomes. The first time around, Alisha dropped out as a freshman to enter the working world. This time, she will leave Cal State San Marcos later this month as the winner of the dean’s award for outstanding graduate from the College of Business Administration, and she’s not even close to done yet, either.

This fall, Alisha will begin a one-year master’s program in accounting at UC Irvine, which includes a $15,000 faculty fellow scholarship, and in 2020 she plans to pursue a Ph.D., with a goal of ultimately returning to CSUSM as an accounting professor.

“My motivation definitely comes from the fact that I know what I’m getting out of college, so I’m very focused and determined,” Alisha said. “I have a mission, and I’m going to achieve it. Also, time is precious to me. I’m not 18 to 20 with my whole life in front of me. I’m doing something very specific, and it’s time to get it done.”

Alisha’s intense drive, at age 41, to make the most of her second stab at college led her to do things like take a combined 59 units in one year at MiraCosta and Palomar colleges before she transferred to CSUSM in the fall of 2017. It led her to log 19 units of upper-division courses last spring and 18 last fall, those semesters sandwiching a summer in which she took four classes at CSUSM and one at Palomar.

It led her to seek involvement with the university, specifically the accounting department, far beyond her heavy class load. Alisha quickly was elevated to head tutor after volunteering to help out in the accounting lab, she served as a supplemental instructor and teaching assistant in different accounting classes, and she was the vice president of the Accounting Society, responsible for bringing in many outside firms and hosting its biweekly meetings.

All of those extracurricular pursuits didn’t cause her classroom performance to suffer in the slightest, as she has recorded a grade-point average over 3.8.

She did have a choice, however, about how to apply her degree. When Alisha first decided that accounting would be her second career, she wanted to start her own bookkeeping business for the work flexibility it would provide. Then she thought she might want to get a job at one of the Big Four accounting firms, lured by the glamour of being employed by a prestigious global company like Deloitte or Ernst & Young. 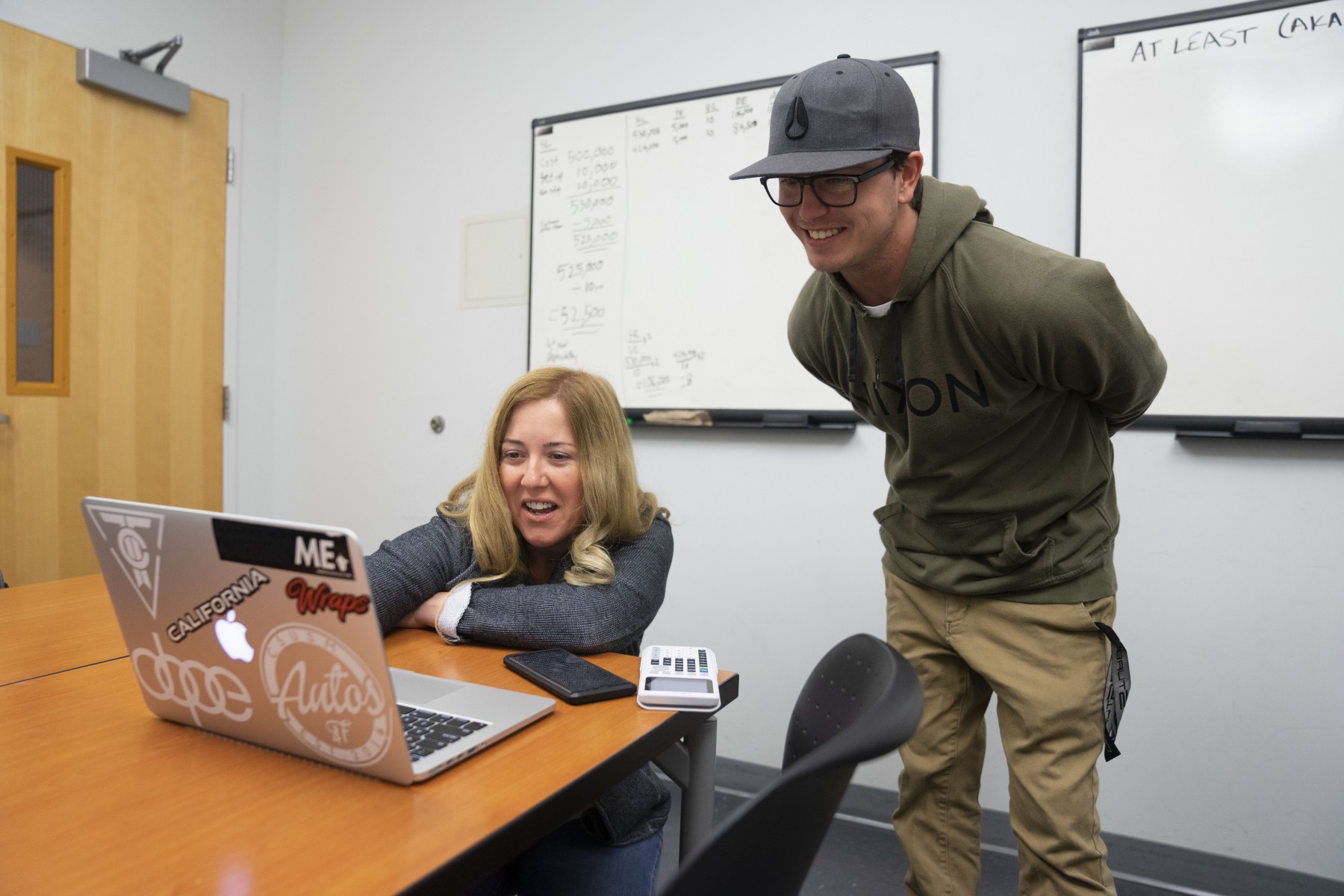 Alisha Blush
The outstanding CoBA graduate rose to head tutor in the accounting lab, and she wants to earn a Ph.D. and become an accounting professor. Photo by Chandler Oriente

It was at CSUSM that her aspiration changed. With the encouragement of mentors like Zaidi, who taught her in a cost accounting class last spring, Alisha began to think long and hard about eschewing the pressure-cooker world of financial accounting in favor of becoming a professor herself. As she volunteered for more and more activities to test her newfound inclination, she discovered that she had a knack for explaining complex material and that she appreciated the variety of tasks that the job would entail, from teaching to research to service.

“She lectured in two of my classes,” Zaidi said. “One of the lectures was impromptu. Her confidence, her enthusiasm and her eagerness to help students made me think that she is a great candidate for a Ph.D. I saw my mirror image in her. I have no doubt that she will be a great professor.”

Alisha appreciates the irony in the fact that, when she first set off for college as a teenager, she was determined to become neither an accountant (her father is a CPA) nor a teacher (her mother taught early childhood development). But the Oceanside native didn’t know what career she did hope to pursue, so she matriculated to UC Santa Barbara with the half-hearted idea of being a doctor.

Only 17 when she enrolled, Alisha quickly realized that she didn’t want to be there, and when she picked up a part-time sales job at Nordstrom to help cover school expenses, she discovered that she was good at it. She withdrew after two quarters, soon married a man she had met at UCSB, and began an almost 20-year odyssey in various sales positions, eventually rising to store manager of Paper Source in Santa Barbara.

Her life took an unexpected turn in 2013. Only two months after she and her husband decided to separate – “We were no longer the right person for each other,” Alisha said – she was diagnosed with thyroid cancer. She underwent surgery that September to remove her thyroid gland and a few lymph nodes, but afterward her endocrinologist struggled to find the correct dosage of replacement thyroid hormone (the thyroid regulates both metabolism and body temperature).

“I got to the point where I had gained a significant amount of weight and I was freezing cold,” Alisha said. “I was so cold that my fingernails were blue. I was always in jackets. It took two years to get it all straightened out. I felt like I was a pin cushion, like ‘Here’s my vein, do your blood work.'"

Frustrated by the lack of improvement in her condition, Alisha switched her medical care to UCLA and had a second surgery to remove additional cancer in February 2015. She’s now cancer-free, though her thyroid levels are still checked every year.

“I literally have to take two pills a day to stay alive,” she said. “It’s an interesting thing to come to terms with.”

Another thing she came to terms with was that she had more to offer than running a store for the rest of her life. After a particularly rough holiday retail season in 2015, Alisha chose to make a clean break and go back to school, enticed by her parents’ offer to let her live with them in Oceanside and pay for her living expenses if she returned to college.

She hasn’t looked back since. The outstanding CoBA graduate has much left to accomplish, and the clock is ticking.

Nick Krueger considers himself lucky to have found a perfect fit when he pledged a fraternity at Cal State San Marcos in fall 2016. It was during Krueger’s second year on campus and he had just …
Read more

Lauren Loeb has been interested in political science ever since visiting Washington, D.C., for the first time as an eighth grader. Loeb had an opportunity to return to Washington last fall, this …
Read more

While her fellow Cal State San Marcos professors were knee deep in the first day of final examinations last December, Kristen Nahrstedt received a call asking if she could be ready in three weeks to …
Read more
NewsCenter

Resources for those Impacted by Sawday & Miller Fires