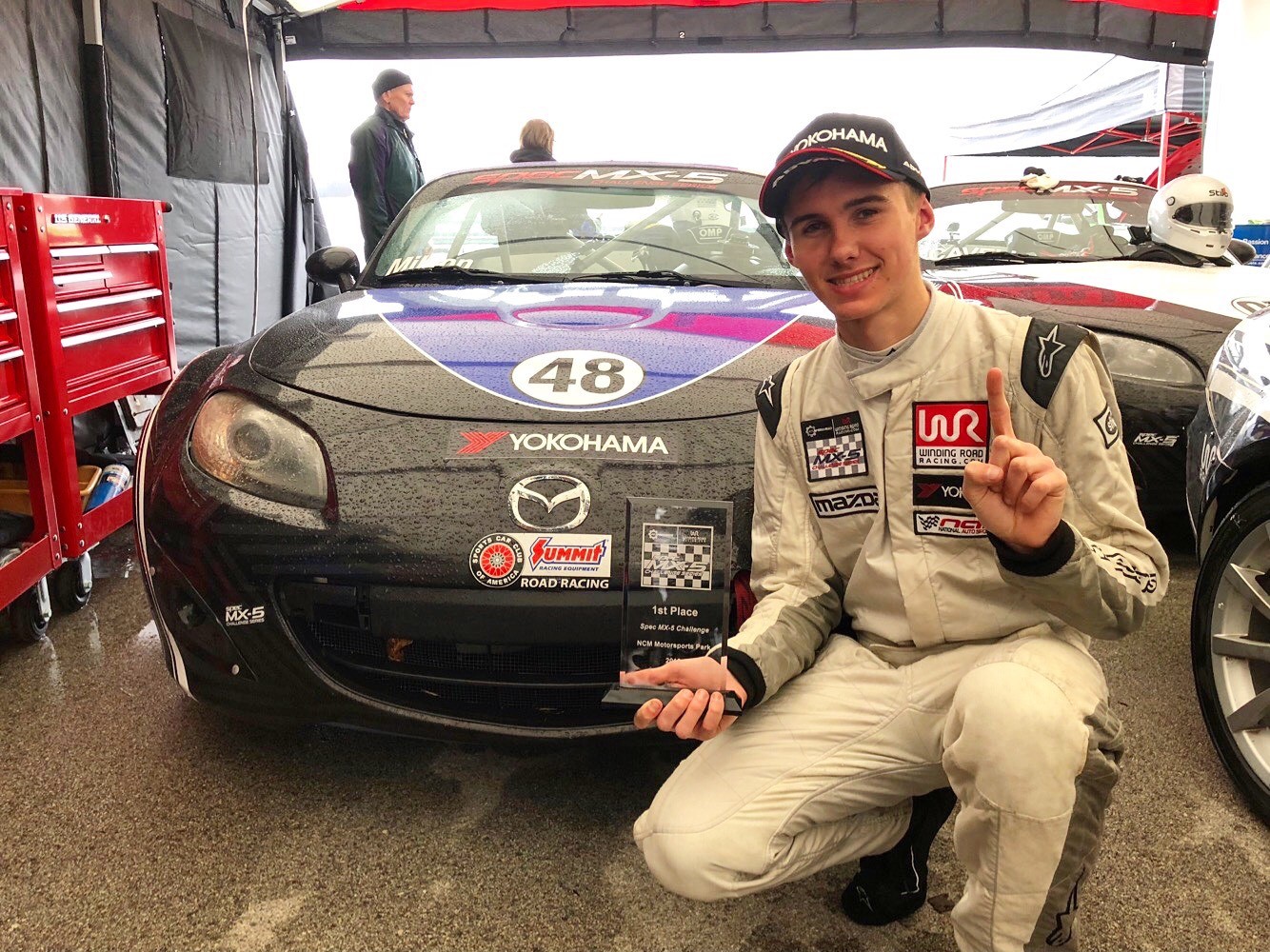 Junior business student Matt Million is also a semi-professional race car driver who has been competing since he was 5.

Last fall, The Alliance to Accelerate Excellence in Education, a Cal State San Marcos program that provides guaranteed admission to qualified students in certain local school districts, went virtual with its outreach because of COVID-19.

For the CSUSM students involved in this effort, it meant that instead of traveling to high schools and middle schools throughout the region, the so-called “road shows” took place via Zoom presentation. And that was a very fortuitous development for one student in particular.

While his CSUSM peers logged in from various places around North County, Matt Million signed on from half a world away. Million is a lifelong race car driver whose exploits last fall took him to Germany, where he lived for 10 weeks – racing, taking classes online, and doing his part to advance the mission of The Alliance.

“I got to do a few road shows from Germany, and it always made for a funny conversation. That’s a good way to motivate some students,” said Million, a junior who’s majoring in global business. “I ran into some issues where the Zoom rooms the schools put up would block anything that came out of the United States, but usually I found a way around it and it went as normal. The only difference was that it was dark outside and I was getting ready for bed.”

Million’s fascinating background – he has been racing some form of vehicle since he was 5 and hopes to turn it into a career – makes him a good fit as an Alliance ambassador. These ambassadors are Alliance students (meaning they attended one of the partner schools) who receive working scholarships to serve as peer mentors helping inspire K-12 students to take advantage of the doors that college can open. 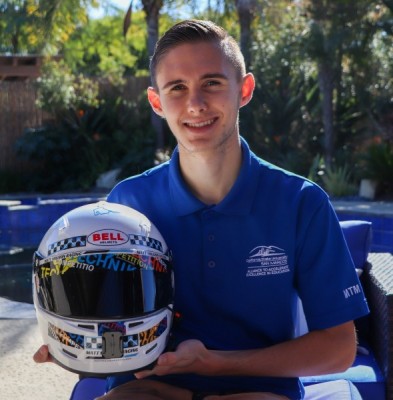 Million is a member of the fourth cohort of ambassadors. The new crop of 12 first-year students comprises the most diverse group of ambassadors in program history, according to Theresa Meyerott, executive director of The Alliance.

The work of the ambassadors during the pandemic – they have connected with almost 2,000 students via virtual formats – is just the latest success story of The Alliance, which was founded in 2013 thanks to funding from Price Philanthropies. With the help of a recent three-year grant from Price Philanthropies, The Alliance will continue to expand its program in the region.

“The ambassador program is meant to help K-12 students realize that college is an opportunity if they want it and what they need to do to get there,” Meyerott said. “And they’re often hearing it from a local student who went to that school. Ambassadors learn to be leaders during their four years in the program, and they slowly take on more and more responsibility as they approach graduation.”

Million knows all about responsibility, as an only child from San Marcos who has navigated the complex world of youth auto racing with his parents, but little else in the way of a support system.

His discovery of the sport was a happy accident. His father was a competitor in a different type of racing – road cycling – and took his young son to a bike store. Little Matt wandered off and ended up in the shop next door, which happened to sell go-karts. So it was that the family went home that day not with a bicycle but with a high-powered speed machine.

While many of his neighborhood buddies were playing Little League baseball or AYSO soccer, Matt was being ferried by his parents to tracks across Southern California to try his hand at youth go-kart racing. It didn’t take long for the family to realize that this was more than just a lark. It was the perfect marriage of sport, skill and temperament.

“I think I adapted to it well because I’ve always been a pretty independent person. I do a lot of thinking and I like analyzing things,” Million said. “People always associate racing with danger, but I never thought about it like that. It was more, you put the helmet on and you’re by yourself in the car and it’s up to you to make the most of that situation.”

Million raced in the regional go-kart circuit for seven years until, at age 12, he decided he was ready to take the next step. Through a fellow racer who was five years older, he learned of a new series called the Teen Mazda Challenge in which teenage competitors drive souped-up Mazda Miatas while also receiving personal development toward a possible career in the sport, including practice in skills like interviews and marketing.

Million spent his first year in the organization helping his dad get the car race ready and preparing to obtain the license he would need to operate a more turbocharged caliber of vehicle. Then, over the next four years, he progressed from being happy to finish a race to placing in the top group to notching his first victory to coming within a couple of points of winning the season championship.

By 2018, Million had moved up to yet another level of competition, a semi-professional series featuring a team structure and races across the nation. He was also ready to pick a college, which for him turned out to be an easy choice. Besides the fact that his father had been part of CSUSM’s second graduating class back in the mid-1990s, Million valued the strength of the College of Business Administration and the affordability of the university, allowing his family to devote more of their resources to his expensive passion.

He applied for and received an Alliance ambassador scholarship in fall 2019, the beginning of his sophomore year.

“It’s really given me a better purpose at Cal State San Marcos,” he said. “I love being a student, but the ambassador program has made my whole college experience more fulfilling. I think back to when I was in middle school, and I would have loved to hear from me at this time. I feel like I’m able to give back, and that has made it a two-way street for my education.”

Early in 2020, when Million still was settling in as an ambassador, he discovered a new entry-level racing championship in Germany. Germany always had represented something of a white whale for Million; his favorite type of racing is the endurance variety, and one of the most prestigious in the genre is the 24 Hours Nürburgring event in the southwest region of the country.

He reached out to a racing team that was receptive to an American joining, and in mid-February, he flew to Germany for an important testing session. He left California on a Thursday and returned on a Sunday. It was his first time ever being outside the United States.

“It was the most bizarre, coolest experience of my life,” he said.

Million planned to go back and forth every couple of months for races, with the first one scheduled for the end of March. Of course, that coincided with the world shutting down as a result of the pandemic. When the championship resumed last summer, it was impossible for Million to make it to Germany because of travel restrictions.

That changed in September, when Germany’s COVID situation was largely under control and Million was able to be classified as an essential worker as a member of his new racing team. Because CSUSM had switched to remote instruction, he realized he wouldn’t need to make the long trek for each race. He could simply live in Germany for the fall.

“It was pretty surreal,” Million said. “I would walk down the streets and it would be all Germans because there were almost no tourists. And how do you categorize yourself? Technically, I was there working, but I’m also a student. I was studying abroad, but not officially. Just a unique experience, and it worked out well.”

Now back in his home city, Million hopes to return to Germany for about a month sometime this year to secure a permit that would represent a first step toward his ultimate goal – racing in the 24 Hours Nürburgring. As an Alliance ambassador, he’s in charge of the road shows this semester, which surely means compelling content for aspiring college students.

“Racing already has led to places that I never could have imagined,” he said. “I want to get my degree, I want to find work with a global business background, and if I’m able to pair that with racing, that would be incredible.”