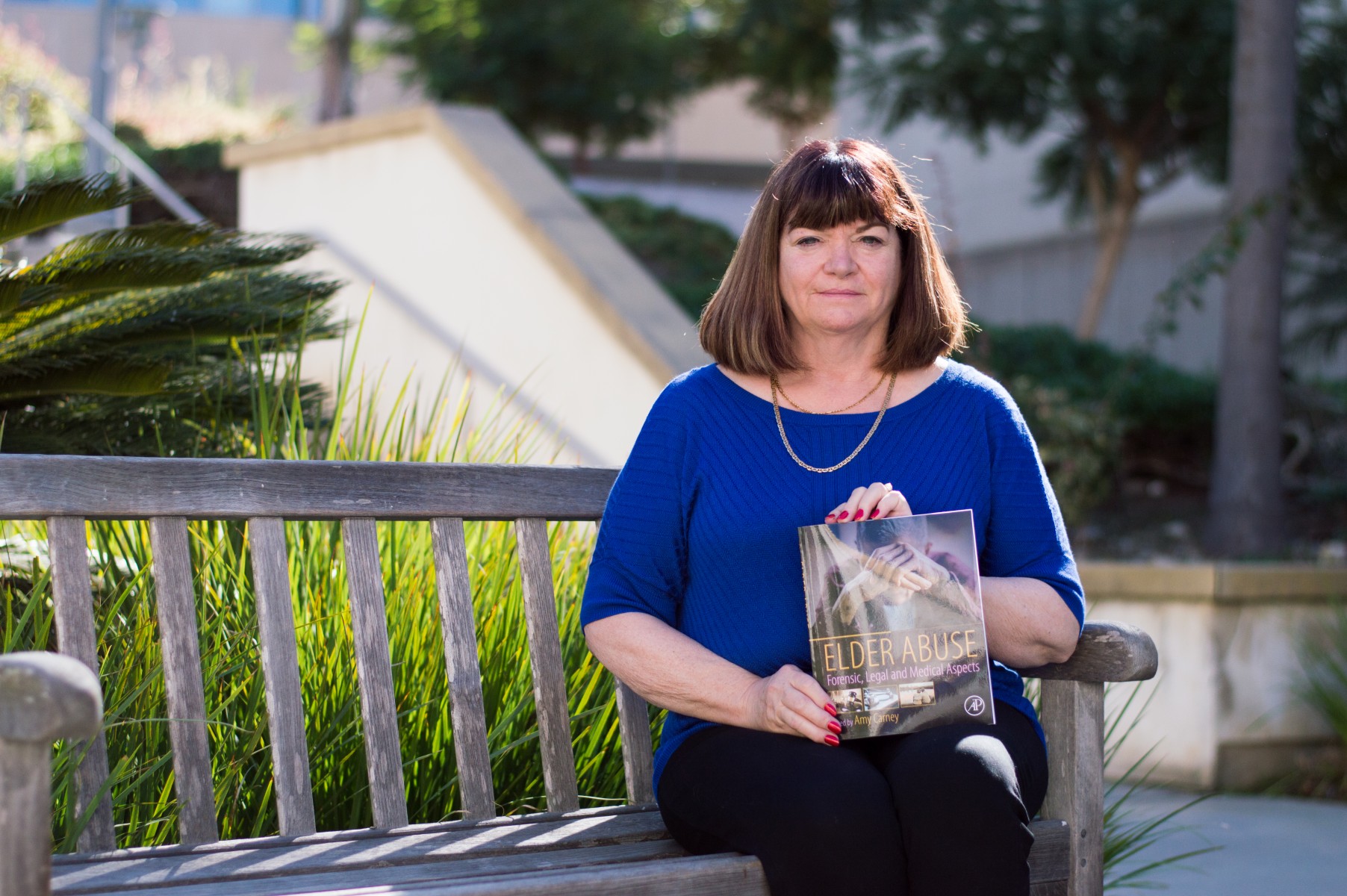 Amy Carney, an associate professor in the School of Nursing, has co-written and edited, “Elder Abuse: Forensic, Legal and Medical Aspects." Photo by Angelica Pena

The abuse can be financial, psychological, physical or sexual. And when it comes to the elderly, it is only getting worse. All of which is why a new book that was co-written and edited by Cal State San Marcos associate professor Dr. Amy Carney, “Elder Abuse: Forensic, Legal and Medical Aspects,” has the promise to become a seminal work on the subject.

“Elder abuse is prevalent across all socioeconomic levels in every community,” Carney said. “And it is a public health epidemic that we’ve really only just started to respond to in the past 10 to 15 years.”

The forward notes that the United Nations has emphasized the importance of preparing for an aging population, with a strong focus on protecting and promoting the rights of the vulnerable, and the book explores the challenges facing the healthcare and criminal justice systems in preventing and addressing abusive behaviors. By 2050, more than 20 percent of the population will be older than 65. Yet, as the book notes, one of the major problems that investigators and prosecutors have faced is a lack of reporting in elder abuse.

“Elder Abuse: Forensic, Legal and Medical Aspects” is packed with insight on the psychological, financial and physical abuse and neglect that is widespread among the elderly and comprises a dozen chapters with titles such as “Interpersonal Violence and the Elderly,” “Sexual Assault and Rape of the Older Person,” Psychological Abuse” and “The Criminal Justice Response to Elder Abuse.” Each chapter was written by an expert, or experts, in their field, including Carney.

The 282-page text is aimed at a wide audience.

“We wanted to create a book with a very broad appeal, including educators and students, law enforcement, health care professionals, social workers and multidisciplinary teams who work with the elderly,” Carney said. “Anyone interested in the topic of elder abuse can get something valuable out of this book.”

Carney said she was contacted by Elsevier, a global information analytics business that publishes everything from books to digitized journals founded on science and research to help tackle the most urgent human crises, after attending a 2017 American Academy of Forensic Sciences conference. The publisher followed up with a request for a prospectus. By the end of the year, Carney had lined up a list of authors, and writing got under way in January 2018. The book was released in October.

Besides Carney, authors include Kimberly Liang, a former pharmacology professor at CSUSM; Paul Greenwood, the former head of the elder abuse prosecution unit at the San Diego County District Attorney’s Office; Robert Stabley, deputy medical examiner at the San Diego County Medical Examiner’s Office; and Russ Neuhart, a human development lecturer at CSUSM. Among other contributors are Diana K. Faugno of the Eisenhower Medical Center in Rancho Mirage; Rita A. Jablonski, of the School of Nursing, Department of Adult Chronic and Continuing Care, at the University of Alabama; and Kathleen Thimsen at the Goldfarb School of Nursing at Barnes Jewish College in St. Louis.

Carney is an associate professor in the CSUSM School of Nursing who is a Fellow of the American Academy of Forensic Sciences, and her doctoral dissertation, Battery and Abuse in the Elderly: A Forensic Analysis, has been presented both nationally and internationally. Her background includes working for a decade as a sexual assault nurse examiner (SANE) at Palomar Hospital in Escondido who teamed with law enforcement personnel in collecting evidence for sexual assault cases. Her research later turned toward elder abuse and prevention.

“I think you can take the measure of a community by how it treats its elderly,” she said.

Cal State San Marcos is preparing to open a new center on campus dedicated to the practice of mindfulness.The Center for Contemplative Practices officially will launch on Thursday, Nov. 10 with an …
Read more
NewsCenter