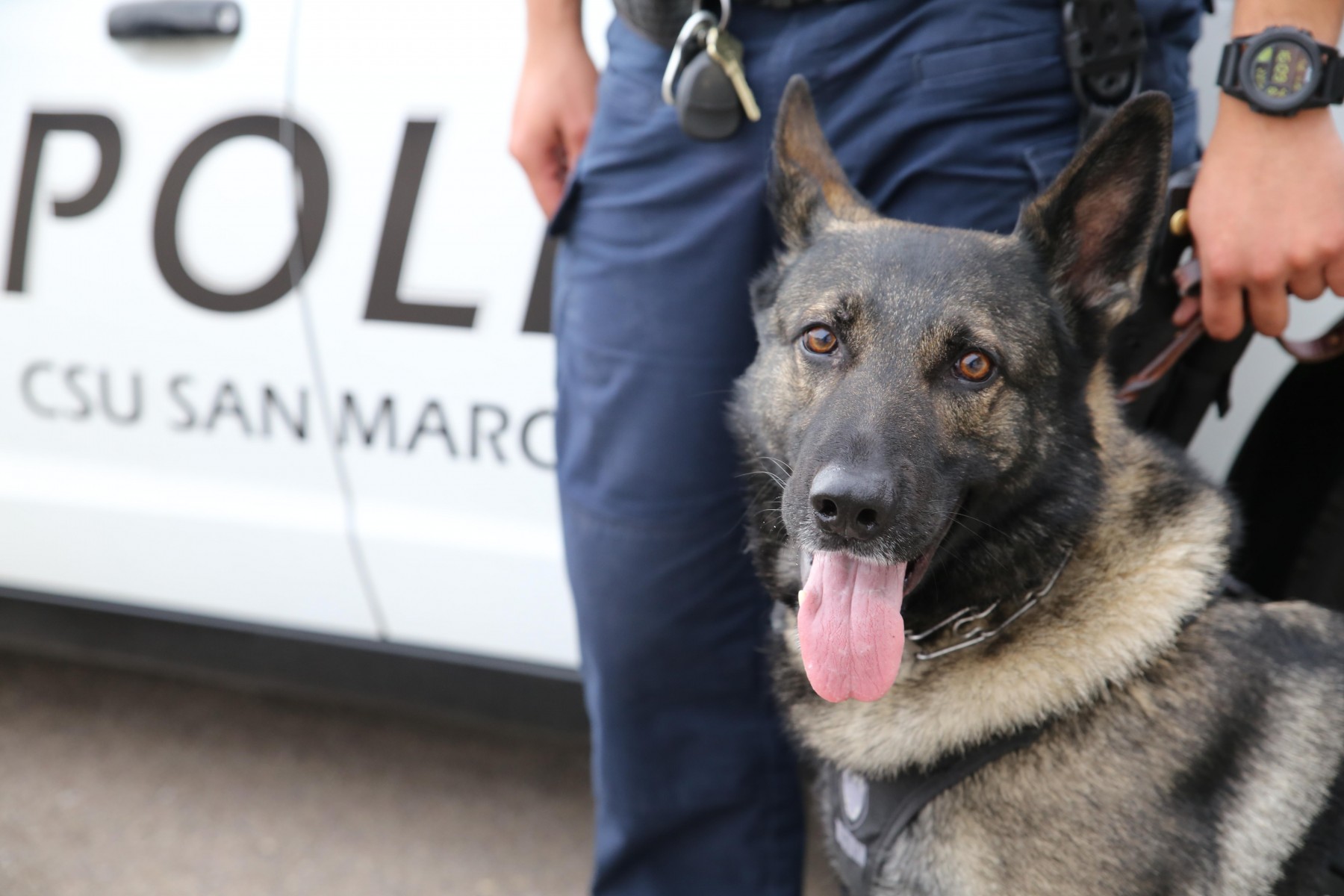 California State University San Marcos’s (CSUSM) bomb dog, a four-year-old German Shephard named Armor, will be receiving a bullet- and stab-protective vest donated by Vested Interest in K9s, Inc. The organization, dedicated to the safety of law enforcement canines, initiated a Groupon Grassroots campaign to fund ballistic vests and raised more than $335,000 through tax-deductible donations. Each vest has a value of $1,700 to $2,300.

Originally from Germany, Armor arrived in the U.S. for training less than a year ago. CSUSM Police Officer David Angulo and his trustworthy, K-9 crime fighter spent countless hours at the Inglis Police Dog Academy in Santa Paula, California before working their first assignment together at the University’s commencement ceremonies last May.

Armor is one of three explosives detection canines in the California State University system and the only one in North San Diego County. He is proficient in detecting 20 odors, more than the federal requirement for a certified K-9.

The duo has a very important role on campus—to search buildings, structures, open areas and vehicles, as well as articles, where a suspected explosive device has been reported or located—but their duties extend beyond CSUSM. They are frequently on call for external requests from the City of San Marcos and other surrounding communities that may need their support.

“In addition to protecting CSUSM, Armor can also support the three neighboring campuses of San Diego, Fullerton and Pomona which have an accumulative student enrollment of more than 143,000 students, not including the thousands of faculty and staff,” said Angulo.

Armor has also assisted with dignitary protection details, including VIP visits and the Special Olympics. In September he was assigned to a small detail team that provided support for the CNN Republican candidate debate at the Ronald Ragan Presidential Library.

Unfortunately it is not uncommon for a K-9 like Armor to be fatally injured while in the line of duty. More often than not, K-9s are sent into serious situations first, putting their lives on the line for their partners.

“Because of the high risk of danger to the public, campus community and officers, when a bomb or other device it suspected, the use of a trained explosive detection canine such as Armor is warranted,” said Angulo. “Even with the vest from Vested Interest we are still in the line of danger, but it will provide protection for him so that he is not completely vulnerable when we receive a call.”

In January 2014, K-9 Rocco of the Pittsburg Police Department in Pennsylvania sacrificed his life attempting to protect his handler from a violent struggle with a fugitive armed with a knife. Rocco succumbed to stab wounds two days after the incident. All vests will be embroidered in his honor with the sentiment, "In Memory of K-9 Rocco, Pittsburgh Bureau of Police"

“I always want him to be protected and having this vest will give me that extra peace of mind,” said Angulo. “He’s is a loyal partner and knowing he is safe is a top priority.”

About Vested Interest in K9s, Inc.

Vested Interest in K9s, Inc. is a 501c(3) charity located in East Taunton, MA, whose mission is to supply dogs with bullet- and stab-protective vests and other assistance to dogs of law enforcement and related agencies throughout the United States. The non-profit was established in 2009 to assist law enforcement agencies with this potentially lifesaving body armor for their four-legged K9 officers. Since its inception, Vested Interest in K9s, Inc., has provided over 1,700 protective vests in 49 states through private and corporate donations at a cost of more than 1.4 million dollars.