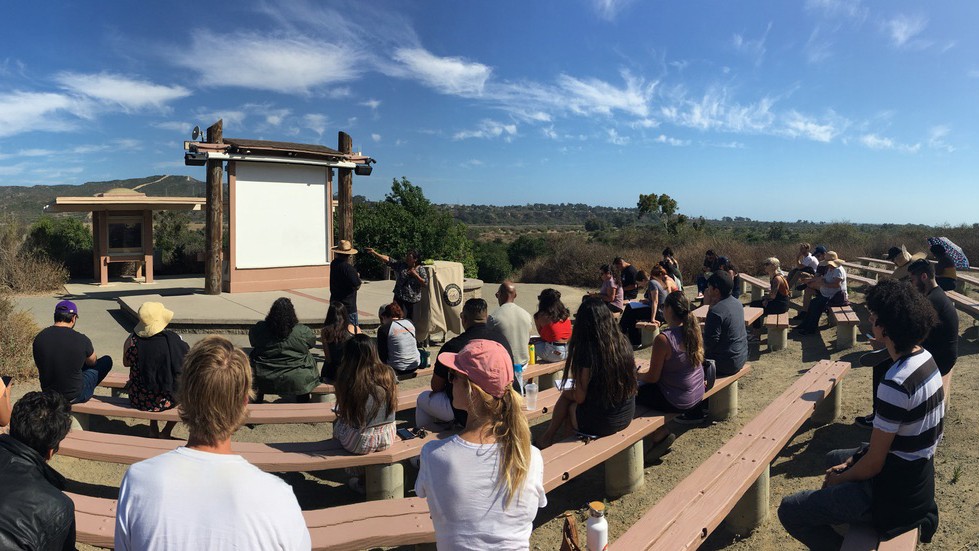 Students of American Indian studies lecturer Dina Gilio-Whitaker listen to a presentation on a Native American sacred site of the Acjachemen nation in San Clemente.

That emphasis might have been surprising to progressives across the country who perhaps didn’t think that a political centrist like Biden was up to the challenge of advancing bold climate policy.

Both in her writing and her advocacy, however, Gilio-Whitaker broadens the traditional meaning of environmental justice to focus on the unique needs of her people. She descends from the Colville Confederated Tribes in Washington state and regularly is invited to speak to audiences nationwide about topics related to American Indians.

Question: Can you start by defining environmental justice for people who may not have a good grasp of the term? 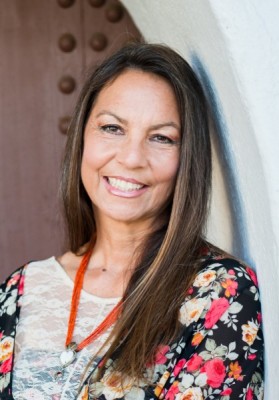 Dina Gilio-Whitaker: Environmental justice refers to the ways that communities of color are disproportionately impacted by environmental processes that expose them to risk and harm. We don't have the language for this until the early 1980s, and it comes as a result of activism that's happening in the Deep South, in Black communities in North Carolina. They're fighting against the siting of a toxic waste dump, which leads to studies that argue for this new kind of racism called environmental racism. Even earlier, we see some of these harms and risks in farmworker communities in California. César Chávez comes to mind, how he led the fight for farmworkers’ rights as a result, initially, of the exposures to pesticides in farm practices. That’s another early articulation of ethnic minority communities being disproportionately harmed. The water crisis in Flint, Mich., is a prominent recent example because it largely affected Black communities.

Q: In your 2019 book, “As Long as Grass Grows: The Indigenous Fight for Environmental Justice from Colonization to Standing Rock,” you argue that the traditional understanding of environmental justice is insufficient for American Indian communities. Can you expound on that?

DGW: In this case, environmental injustice is a direct result of a centuries-long forced dispossession of Native people from their land. Their whole lives are structured around particular ecosystems, so the forced displacement from those ecosystems results in genocidal processes. Pushing people off their lands is a process, I argue, of environmental injustice toward Native people. And there are all kinds of other ways that we can measure these injustices. For Native people, as people with political relationships to the state, this framework of environmental racism is very inadequate to describe these ongoing processes of injustice. In the realms of policy and law, there's no accommodation for this. So my argument is that it needs to be indigenized; it needs to be expanded to understand the colonial history and structure of the U.S. in order to understand what injustice is environmentally for Native nations.

Q: How do you feel about environmental justice being a major prong of Biden’s climate plan?

DGW: It makes me optimistic, or I would say cautiously optimistic. We heard in the Obama administration some commitments to environmental justice, though not as much. I think the climate crisis is really more ramped up now, especially after four years of Trump and the extensive rolling back of environmental rules and regulations, and downplaying of climate change. There were over 100 rules and laws that the previous administration pretty much eviscerated in four years. Now there's a much more renewed and robust commitment to environmental justice with the Biden administration. I think it's because of the backsliding of the last four years.

Q: Is this something you could have imagined from a political moderate like Biden?

DGW: It actually seems inevitable to me given the state of affairs of the world and the fact that we are in what experts agree is a sixth mass extinction event. We know ecosystems are collapsing. We know that climate change is happening. We see it, we are living with it daily now. So it doesn't surprise me, and I'm happy that there is this very visible, very explicit commitment to environmental justice. I think they're taking it seriously.

Q: What is another example, other than the climate plan, of where you’re seeing that commitment?

DGW: I sat in on a webinar a couple of weeks ago that was put together by the Biden-Harris transition team. It was an informational webinar that they directed to people with environmental justice expertise to apply for jobs everywhere in the federal government. They talked about this thing called the Plum Book, which I had never heard of. It’s a directory, like 237 pages long, of all the jobs in the federal government, all three branches. They encouraged us to study the book and find out where we think our skills as an environmental justice activist or leader would best be put to use. So it's a very broad-based approach where they're seeming to want to infuse all aspects of government with environmental justice expertise. It's pretty interesting.

Q: Were you tempted at all? Have you perused the Plum Book?

DGW: I was tempted, but I'm so busy. I don't want to go to work for the federal government. I don't want to move to Washington, D.C. I would love to be an adviser to people in high-level positions. Assuming Deb Haaland gets confirmed as Secretary of the Interior, I could see ideally being consulted at that level or some other level, maybe in the EPA. But to be a 9-to-5 employee of the federal government, no. I'm able to have more impact doing what I do as a teacher and in my consulting work.

Q: I'm glad you brought up Haaland, who would become the first American Indian to hold a cabinet position. How encouraging is that for Native communities?

DGW: A Native person, let alone a Native woman, being appointed to a cabinet-level position is real progress. And I think her politics are in the right place. My concern, though, is that the structure is the structure. It's just a revolving door of people and personalities who fill those positions, and they’re based on a very particular structure that is fundamentally colonial, built on logics of dispossession and injustice toward Native peoples, and it's upheld by the scaffolding of federal Indian law that is really problematic for Native people. It's not a system that is designed to deliver justice. There are massive forces that are in conflict with tribal interests. So it will be really tricky for her to get some serious work done amid all of that. I'm skeptical about what actually will be accomplished.

Q: Getting back to the Biden climate plan, have you had a chance to delve into it? What do you think about the meat of the plan from an environmental justice framework?

DGW: I haven't really looked at it. From what I’ve read, people are saying it's basically the Green New Deal without the title, and I do know about that. I wrote an article in 2019 for High Country News about the Green New Deal and how it, along with environmental justice, needs to be indigenized, or adapted to be responsive to Indian country. One of the things that worries me is that things won’t fundamentally change under Biden compared to the Obama administration. For Native people, that's a problem because it was under the Obama administration that we got energy independence through fracking processes in the Bakken oil fields. That has led to massive problems for Indian country; that's what gave us the Standing Rock conflict. We continue to have Native peoples fighting oil pipeline projects. What concerns me is the continuing reliance on fossil fuels as part of an everything-on-the-table approach to energy.

Q: What would you say are the biggest ways that Native populations are endangered by climate change?

DGW: It varies from region to region because of the different ways that climate change impacts different ecosystems. What endangers one community won't be the same for other communities. For example, one of the big threats of climate change for peoples in the Pacific Northwest, like in the Columbia River watershed, is the warming water temperatures, which endanger salmon species. Salmon species are already collapsing because of the proliferation of dams over the last 80-100 years, which block salmon from migrating to the places that they used to migrate to. And now with climate change, it leads to warmer temperatures in the water, which further endangers those salmon species.

I come from a tribe that is salmon dependent. Salmon was for our people what the buffalo are to the Plains people; it's the center of our cultures. But after the building of the Grand Coulee Dam in 1942, the Colville reservation has not seen salmon in the upper reaches of the Columbia since then, because of the flooding of a major salmon fishery that we relied on for thousands of years. So not only is it a culturally genocidal impact, it also led to the inability for us to access a traditional food. There are dozens of other traditional foods that, due to development, have been diminished. And that has led to the kinds of health impacts that Native people experience as a result of these colonial processes. All these things are intertwined.

Q: If you were Joe Biden for a day, what would be the most important step you could take to address environmental justice issues for American Indians?

DGW: I would pass an executive order with a commitment to free, prior and informed consent. FPIC comes out of the United Nations Declaration on the Rights of Indigenous Peoples, and it's a commitment for governments to not just consult with tribes on development projects that involve their lands, but to obtain consent for those kinds of projects. Consultation doesn't mean the same thing as consent. Those are massive differences when it comes to these kinds of development projects.

The United States was the last nation in the world to affirm the declaration, three years after it was passed in the UN General Assembly in 2007. When Obama finally signed the U.S. on as a signatory, he did so with a 15-page declaration full of disclaimers, basically rationalizing how U.S. federal law is already the framework through which all of this stuff will happen. Ultimately, federal law is the problem. It's the structure that maintains this relationship of injustice between tribes and the federal government. Native people are just saying, “Look, you agreed to support free, prior and informed consent, but you're not doing it.” More and more, they’re holding the government's feet to the fire on this concept. And if they actually are able to enshrine consent over consultation in federal law, it'll be a major step forward.