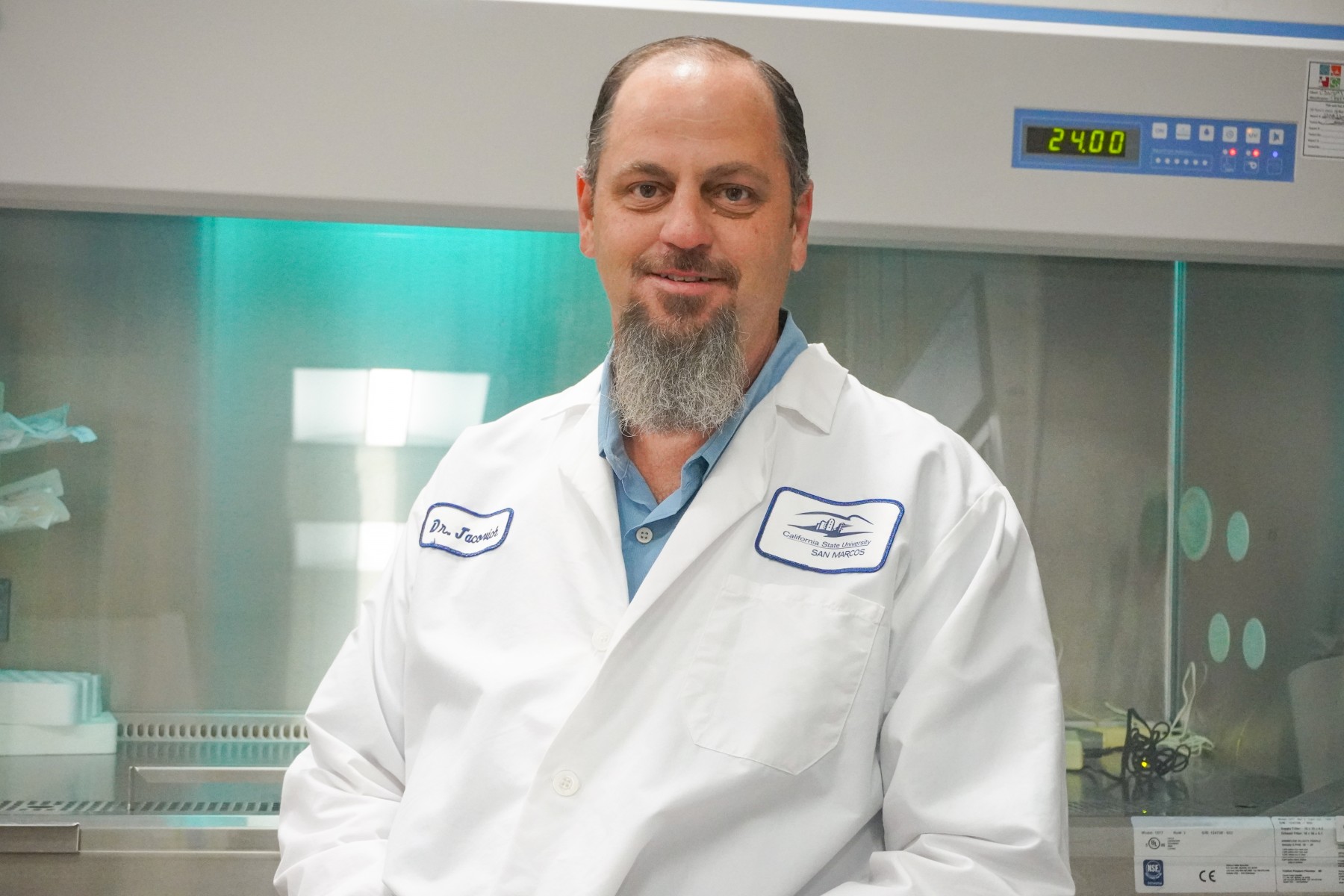 Biological sciences professor James Jancovich is an expert in viruses like monkeypox. Photo by Anthony Deniet

It was back in May that Americans, still weary from the seemingly never-ending fight against COVID-19, began to hear about another contagious virus called monkeypox.

Monkeypox, of course, has not spread with anything close to the speed or ferocity of COVID, but more than three months after it first appeared in the United States, there remains a good deal of confusion (and even ignorance) among the public about the disease.

At Cal State San Marcos, there’s no better person to clear that up than James Jancovich. The biological sciences professor has almost 15 years of experience working in a lab dedicated to poxviruses, a family of double-stranded DNA viruses that includes smallpox and, yes, monkeypox.

Question: How does monkeypox compare with other viruses that people might be familiar with, such as chickenpox and smallpox?

James Jancovich: Monkeypox is a member of the genus Orthopoxvirus, family Poxviridae, a group of poxviruses that can infect vertebrate animals. Monkeypox is closely related to smallpox, the primary pathogen of humans. But they are each a unique virus in the genus. Poxviruses, like monkeypox and smallpox, are not closely related to chickenpox viruses. Chickenpox is caused by the varicella zoster virus – an alphaherpes virus (also known as human herpesvirus 3) and not by a poxvirus.

Q: Have there been spikes of monkeypox before, and why is it spiking now?

JJ: Monkeypox is a zoonotic disease. That is, it is a virus that occasionally jumps from animals to humans. Contrary to the name, monkeypox infections usually jump from rodents to humans, not monkeys to humans. Typically, zoonotic diseases are difficult to transmit from human to human after jumping from animals. However, occasionally, zoonotic pathogens have the ability to cause person-to-person transmission after a jump, and the current monkeypox seems to be this type of pathogen.

That said, previous outbreaks of monkeypox have occurred in humans, and the virus is considered to be endemic in Africa. However, most of the previous outbreaks were limited regarding the spread of the virus; the reason for this is unclear. Our current situation may be the result of infected individuals unknowingly having the disease – or maybe not knowing what it was – and transmitting the virus. If signs and symptoms were not that severe, but the virus was still present and transmissible, this would make it difficult to identify infected individuals and thus increase disease transmission.

Q: How does monkeypox spread? What is the risk of catching it?

JJ: The monkeypox that is currently spreading throughout the world appears to be transmitted primarily via direct contact with an infected individual.  The virus also can be spread by direct contact with fabrics such as clothing, bedding or towels, and other surfaces that have been used by an infected individual. Poxviruses are very stable outside of a host, unlike other viral pathogens like HIV, for example. This property most likely helps spread the pathogen to new hosts.

Immunocompromised individuals are typically more susceptible to virus infections, but this monkeypox outbreak appears to infect primarily healthy individuals. That said, in this situation, sexual activities seem to drive disease transmission – reducing these activities when one is infected and/or covering a rash and cleaning items touched by an infected individual can significantly reduce the spread of the virus. The monkeypox outbreak has an extremely low fatality rate – actually, I do not think anyone has yet died because of the viral infection – so even if someone catches the disease, the probability of surviving the infection is extremely high.

Q: Are there any precautions that people should be taking?

JJ: This outbreak does not appear to be transmitted via aerosolization, a mode of transmission that is difficult to contain, so the best precautions to take are limiting close interactions with someone infected with the virus or exposure to items used by an infected individual. Eliminating these interactions is the best approach to reduce the spread of the virus. Again, this outbreak seems to be disseminating because of sexual activities. Limiting these activities when someone is showing signs of infection would help prevent disease spread.

Q: How would someone know if they had monkeypox? What are the most common symptoms?

JJ: A monkeypox virus infection typically begins with the presence of a rash that can be painful and itchy – the rash looks like small blisters or pimples on the skin. The rash/pustule/pox/blister (I see a lot of different terminology used for a “pox,” the classical term and the reason for the virus’ name) grows and becomes filled with virus particles before drying out and becoming a scab that falls off once new skin has grown underneath. Individuals are typically considered infectious once the rash is observed until after the scab has fallen off.

Symptoms of a monkeypox infection also can include fever, chills, muscle/back aches, headache, etc. – typical signs of being infected with something (i.e. being sick) – also known as flu-like symptoms. Symptoms can start within three weeks of exposure to the virus. Sometimes infected individuals show a rash first before the flu-like symptoms. Other individuals have flu-like symptoms before the rash is present. Others experience only a rash and no other symptoms. The reason for this variation in symptoms is unknown and currently being investigated. This variation in the timing and presentation of symptoms also may explain how the virus was able to spread so quickly.

Q: Do you think it can still be contained, and how long might that take?

One unique aspect about poxvirus infections is that post-exposure vaccination has been shown to help protect individuals from the disease. There are currently two vaccines being used for monkeypox, and it will be interesting to see if post-exposure vaccination also will work in this situation. ACAM2000 is a vaccina virus vaccine originally developed/used for smallpox vaccinations. The second vaccine is based on a highly attenuated modified vaccinia virus Ankara strain called MVA (the name of vaccine is JYNNEOS). ACAM2000 is a single dose vaccine while JYNNEOS is a two-dose vaccine regime. There also is a treatment, recently approved through emergency use authorization, called TPOX that appears to help monkeypox infections. This treatment was initially developed to fight against smallpox, but since monkeypox viruses are related, it can be used to treat those infections as well.

Poxvirus infections also have been treated with viral immunoglobulins – antibodies that help fight the infection. These are typically used in the most severe cases, and since monkeypox is not causing high mortality rates in infected individuals, this treatment may not be necessary.

Q: How do you think the nation’s ongoing experience with COVID-19 has changed the way we’re reacting to this crisis?

JJ: The SARS-CoV-2 pandemic caused a lot of fear and anxiety in society – in some cases, family and friends turned against each other because of differences of opinion or belief about the virus and the best way to deal with it. These wounds are hard to mend, but I believe our collective experience with this pandemic has helped calm society regarding disease outbreaks while educating them about viral infections and host immunity.

Recent data suggest that some of the initial responses to COVID-19 could have been better to help reduce fear and anxiety in society. For example, natural immunity to a viral infection, the gold standard for over a century, was initially dismissed during the COVID-19 pandemic (we now know that natural immunity to SARS-CoV-2 is helpful to fight against infection). Again, regardless of one’s opinion, I believe society collectively has learned a lot about viral pandemics that will help if this ever happens again in the future.