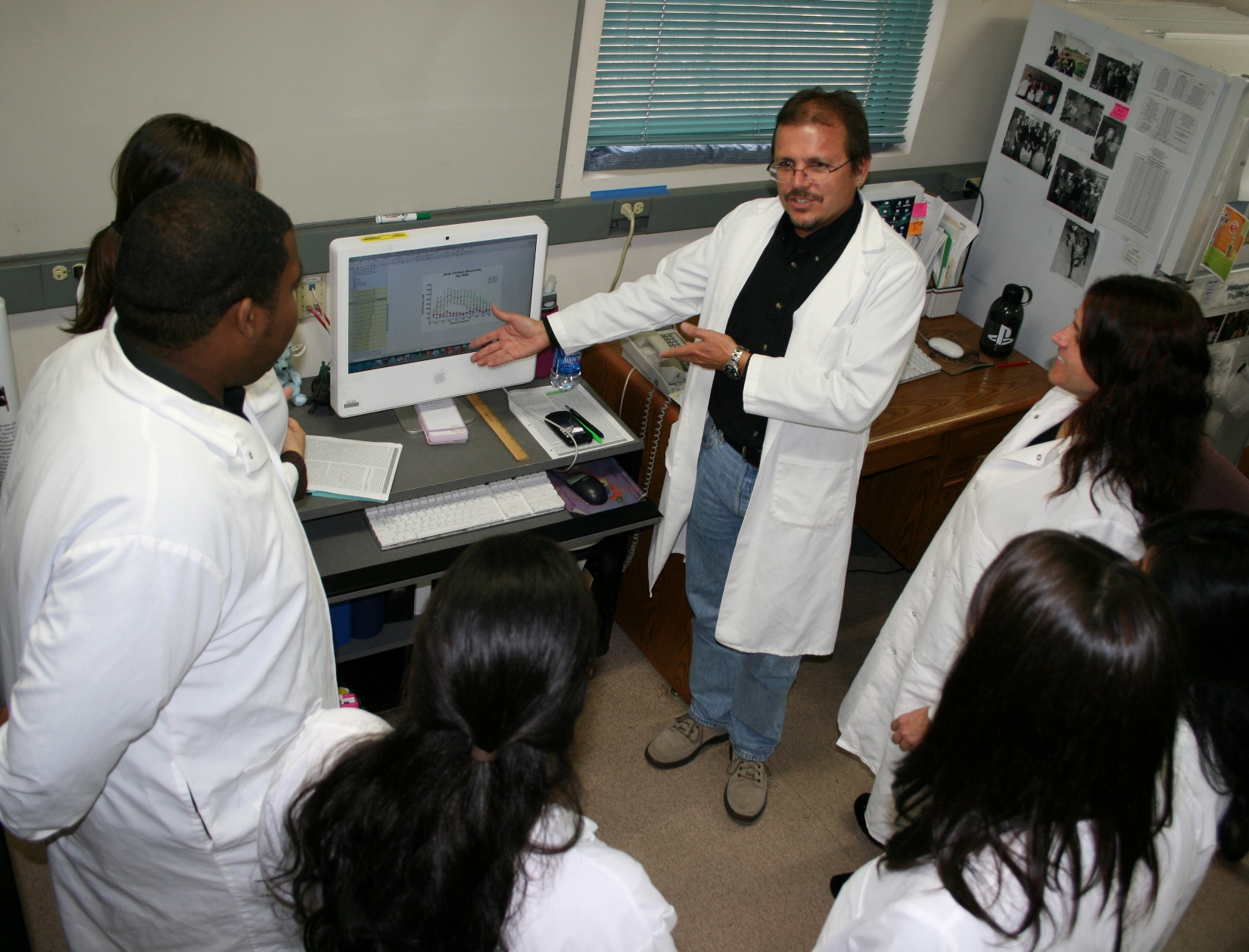 November 2013, Dr. Keith Trujillo
Dr. Keith A. Trujillo with students in CSUSM’s Office for Training, Research and Education in the Sciences. Trujillo was presented with the Award for Education in Neuroscience by the Society for Neuroscience, an organization of nearly 42,000 basic scientists and clinicians from over 90 countries who study the brain and nervous system.

The Society for Neuroscience (SfN) has presented the Award for Education in Neuroscience to Keith A. Trujillo, Ph.D., of California State University San Marcos (CSUSM). The prize, which includes $5,000, recognizes individuals who have made outstanding contributions to neuroscience education and training.

The award was presented at Neuroscience 2013, SfN’s annual meeting and the world’s largest source of emerging news about brain science and health.

“Dr. Trujillo has been tireless in helping students overcome barriers that might otherwise prevent them from pursuing careers in neuroscience,” said Larry Swanson, Ph.D., president of SfN. “We are honored to recognize him for these efforts and his commitment to the future of the field.”

Trujillo has dedicated his career to expanding education and training opportunities for young scientists, particularly those from underrepresented minority or disadvantaged groups. Hundreds of students, postdoctoral fellows and junior faculty have benefitted from Trujillo’s training and mentorship through his work at CSUSM, the National Hispanic Science Network and the Marine Biological Laboratory’s Summer Program in Neuroscience, Ethics & Survival (SPINES) — a program that teaches students typically underrepresented in neuroscience about contemporary neuroscience research, grant writing, public speaking and more.

Trujillo’s commitment to diversifying the neuroscience workforce begins in his own research laboratory, where he studies the behavioral and neural effects of psychoactive drugs. There, he has mentored more than 30 students, nearly all from groups historically underrepresented in the sciences and many of whom have gone on to pursue doctoral degrees in neuroscience. Outside his lab, Trujillo serves as director of several campus programs dedicated to encouraging minority participation in the sciences and actively engages in numerous efforts to educate non-neuroscientists about the field.

“I really enjoy the opportunity to launch students into careers they never would have thought of; many of these students are first-generation college students,” Trujillo said. “We’re training students who are the next economic driving force in our community. Many of these students, who would have ended with careers at a bachelor’s level, are obtaining a Ph.D. in the biomedical sciences and becoming our future leaders in this very important field.”

The Society for Neuroscience is an organization of nearly 42,000 basic scientists and clinicians from over 90 countries who study the brain and nervous system.