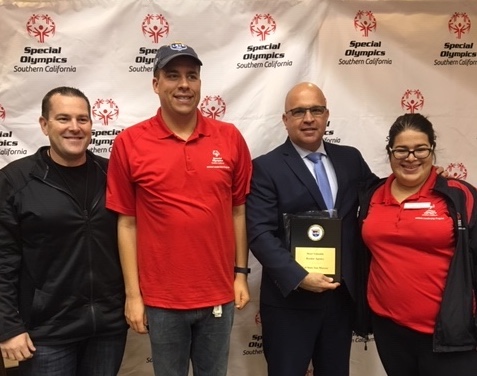 The University Police Department was honored earlier this semester by the Special Olympics at its annual Kickoff Brunch with an award as the “Most Valuable Rookie Agency.” CSUSM Police Chief Scott Ybarrondo was the keynote speaker at the event.

UPD raised more than $4,000 in its first Tip-A-Cop event at Urge Gastropub and, despite being one of the smallest police agencies in the county, finished second in donations for the annual Law Enforcement Torch Run.

The Torch Run began in 1981 in Kansas and has grown to include more than 125 runs, raising more than $500 million for the Special Olympics.

Laurie Stowell, a professor in the School of Education, was recently honored by Ohio State’s College of Education and Human Ecology with a career achievement award, given annually to OSU alumni who have proven records of career accomplishments and have made outstanding contributions to their professions. Stowell received her master’s and doctorate from OSU.

Stowell also heads the San Marcos Writing Project, which aims to boost the skills of K-12 writing teachers through professional development workshops, seminars and other resources.

CSUSM was recently ranked sixth in the nation by the American Physical Society for awarding the highest number of undergraduate physics degrees to underrepresented minorities.

The APS, which works to advance the knowledge of physics, analyzed all U.S. higher education institutions that grant physics degrees, ranking them by number of degrees granted.

The university has been awarded two grants from the CSU Chancellor’s office – a faculty research grant and a community garden grant. The funding will be used to expand the Sustainable Food Project, a living lab started in 2012 by Greig Guthey, program coordinator for the environmental studies program, and to supply fresh produce for the Cougar Pantry.

Facilities Development and Management has been selected to receive APPA’s Effective and Innovative Practices Award. FDM will be honored at the APPA 2019 Annual Conference and Exhibition in Denver in July.

APPA “promotes leadership in educational facilities for professionals seeking to build their careers, transform their institutions, and elevate the value and recognition of facilities in education.”