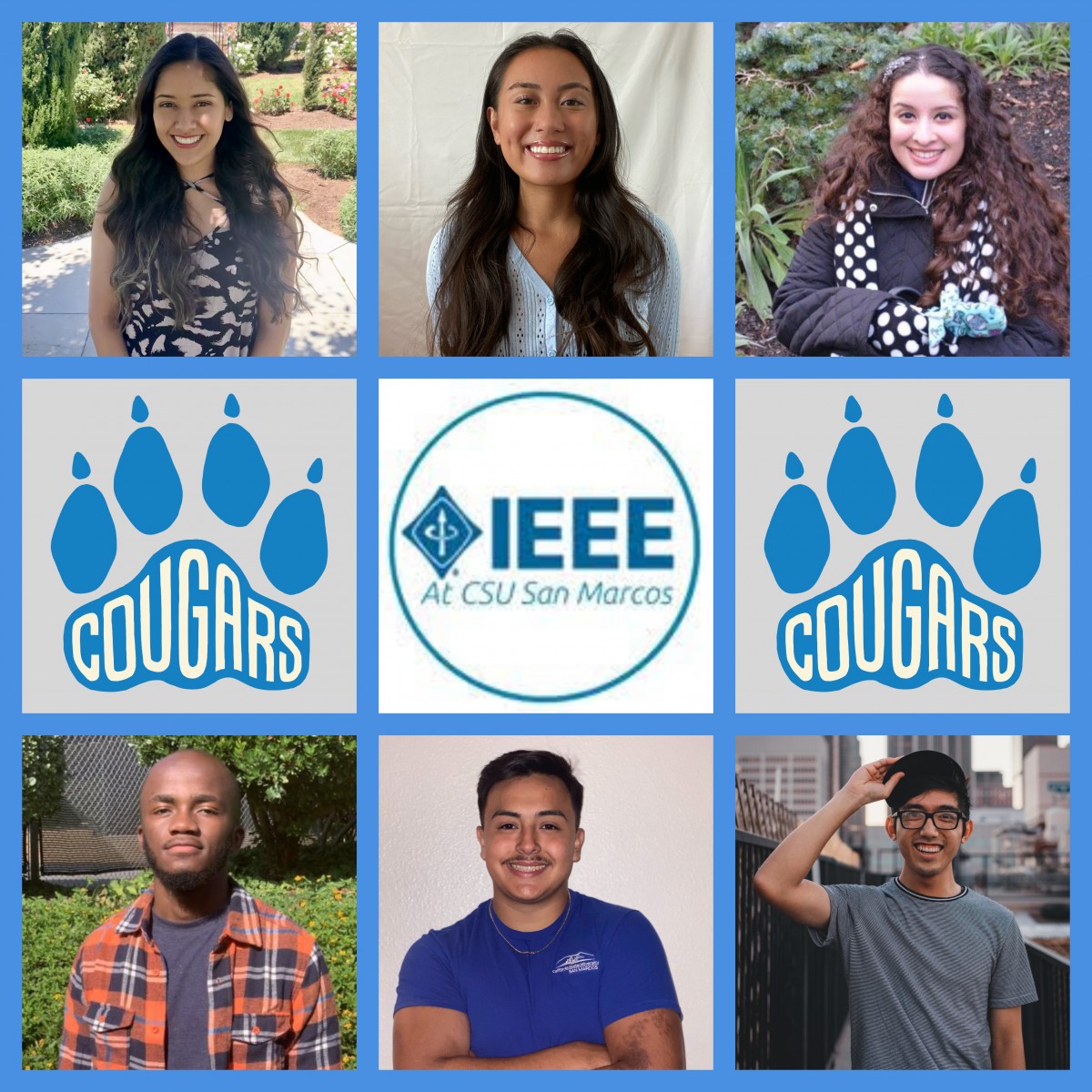 Board members from CSUSM's student chapter of the Institute of Electrical and Electronics Engineers (IEEE), which recently received a $10,700 donation from Qualcomm.

It has been an exciting start to the fall semester for Cal State San Marcos’ Institute of Electrical and Electronics Engineers (IEEE), a student organization advised by software engineering professor Simon Fan.

The group received a $10,700 donation from Qualcomm, funds that will be divided equally between the CSUSM chapter and its IEEE Women's Affiliated Engineering group. IEEE also learned that all participating local student branches have been granted an “IEEE Week in San Diego County” designation by the San Diego County Board of Supervisors for the week of Oct. 4-11.

CSUSM's IEEE members said the group aims “to foster technological innovation and to provide all of our students with access to the best resources, and network- and industry-based opportunities to aid and nurture their desire in becoming successful engineers in the technological field.”

The CSUSM student branch is also collaborating with San Diego State, USD and UC San Diego to “provide the best experience to all of our student members during these critical times.”

CSUSM students from any major are welcome to join IEEE. Benefits include obtaining work experience, engaging in hands-on projects and access to many industry network opportunities. Email ieeecsusm@gmail.com for more information.

CSUSM’s Psi Epsilon chapter of Sigma Delta Pi, the National Collegiate Hispanic Honor Society, was named an “Honor Chapter” for its outstanding activities in 2019-20. It is the fourth straight year that the chapter has been honored.

Sigma Delta Pi chooses 10-15 “Honor Chapters” each year based on an annual report that chapters submit detailing their activities and projects from the academic year.

Micah Mariah, who graduated in the spring, earned second place for her oil painting of rusty patched bumblebees in the third annual Saving Endangered Species College Student Art Contest, which is sponsored by the National Wildlife Federation and the Endangered Species Coalition. The contest provides college students an opportunity to support conservation through artistic depictions of endangered species.

University of Hawaii at Mānoa professor Charlotte Frambaugh-Kritzer, a CSUSM alumna, received a 2020 Board of Regents Medal for Excellence in Teaching. She was among 13 UH Mānoa faculty members awarded out of nearly 300 nominations.

Frambaugh-Kritzer earned her bachelor’s, master’s and teaching credential at CSUSM, and was a Distinguished Teacher in Residence from 1999-2001.

Cal State San Marcos electrical engineering student Sean Resor (he/him) walks into each of his many roles with a kind heart, helpful hand and open-minded ear, which allows him to pave his own path to success and build steady foundations for future …
Read more
NewsCenter