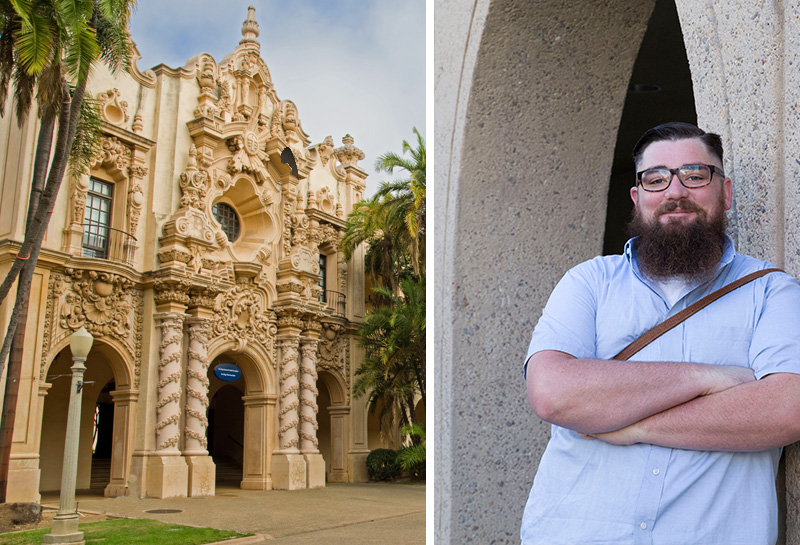 Jonathan Bechtol
Jonathan Bechtol, a lecturer in the History Department at California State University San Marcos, will be discussing his extensive research into the park’s past during a free presentation entitled, “Balboa Park's 1915 Panama-California Exposition: A History.” It will be held at 5:30 p.m. on Dec. 2 in Room 240 of the Arts Building.

It is known as the Crown Jewel of San Diego. It is home to one of the most famous zoos in the world. But the first unified use of Balboa Park did not occur until the greenbelt played host to the 1915-16 Panama-California Exhibition celebrating the opening of the Panama Canal—a celebration that occurred nearly a half century after the park’s opening.

Jonathan Bechtol, a lecturer in the History Department at California State University San Marcos, will be discussing his extensive research into the park’s past during a free presentation entitled, “Balboa Park's 1915 Panama-California Exposition: A History.” It will be held at 5:30 p.m. on Dec. 2 in Room 240 of the Arts Building.

The Panama-California Exposition was aimed at celebrating the opening of the Panama Canal and garnering national and international attention for the city. With San Diego being the first American port-of-call for ships leaving the canal, San Diego's Chamber of Commerce and leading business figures recognized its strategic location and wanted to take advantage of it.

“In order to attract future settlers, the military and investors, the Chamber of Commerce decided an exposition would be the best route,” Bechtol wrote in Balboa Park: An Urban History. “What commenced was an all-out effort to market and develop San Diego as an urban center with the proper resources to handle the new maritime traffic coming in from the Panama Canal while maintaining its small town charm.”

Bechtol is somewhat of an accidental Balboa Park historian. A native of Colorado, Bechtol has been living in North Sam Diego County since his family resettled in Fallbrook when he was in the second grade. He attended CSUSM in the fall of 2000 after graduating from Fallbrook High School, earning both a Bachelor of Arts and a Master of Arts in history. He was working on a project centered on San Diego architecture when he began focusing on the buildings at Balboa Park. That led to a master’s thesis on the history of Balboa Park and its uses over time.

The changes have been profound. In fact, Balboa Park hasn’t always known as Balboa Park. The greenbelt was renamed when city leaders rebranded the once-neglected space in advance of the 1915-1916 Panama-California Exposition.

“City Park, as it was known, was created in the late 1860s as a public space for the people of San Diego to use,” Bechtol wrote. “It was home to a dog pound, orphanage, ammunition dump, school and many other things prior to the turn of the twentieth century.”

When World War I broke out after the 1915 Panama-California Exposition, Balboa Park was handed over to the Navy. Sailors learned to row boats in the lily ponds and many of the old exposition's buildings were used as barracks. Once the war was over, the city regained control of the park, and it wasn’t too long before it began preparations to host the 1935 California Pacific Exposition.

With World War II raging, the Navy in March of 1942 took possession of Balboa Park and renamed it Camp Kidd, after an admiral who was killed during the attack on Pearl Harbor. The entire Park was off limits to civilians and the Navy forced all organizations in the Park to vacate. After the war San Diego faced the difficult task of restoring the damages caused by the Navy and returning to civilian use.

Civilian use was reinstated after the war, but what Bechtol calls a benign neglect lasted throughout the 1950s. In the early 1960s, concern over the dilapidation of the buildings was raised and there were attempts to save as many as possible from the wrecking ball. The problem then became who had the final say over the future of the park and where the money would come from. Private organizations coalesced over these issues, some wanting to preserve the park while others sought to return it to a natural setting.

“By the 1970s and 1980s, issues over preservation versus nature were compounded. New groups, including the gay community and the Centro Cultural de la Raza, sought to establish themselves alongside established organizations like the Museum of Art for example. They did so by forcing their way and establishing themselves either through festivals or cultural organizations, the outcome being a diversified and democratic park.”

Said Bechtol: “It’s a fascinating history, one that I hope to shed some some light on at the Dec. 2 discussion.”