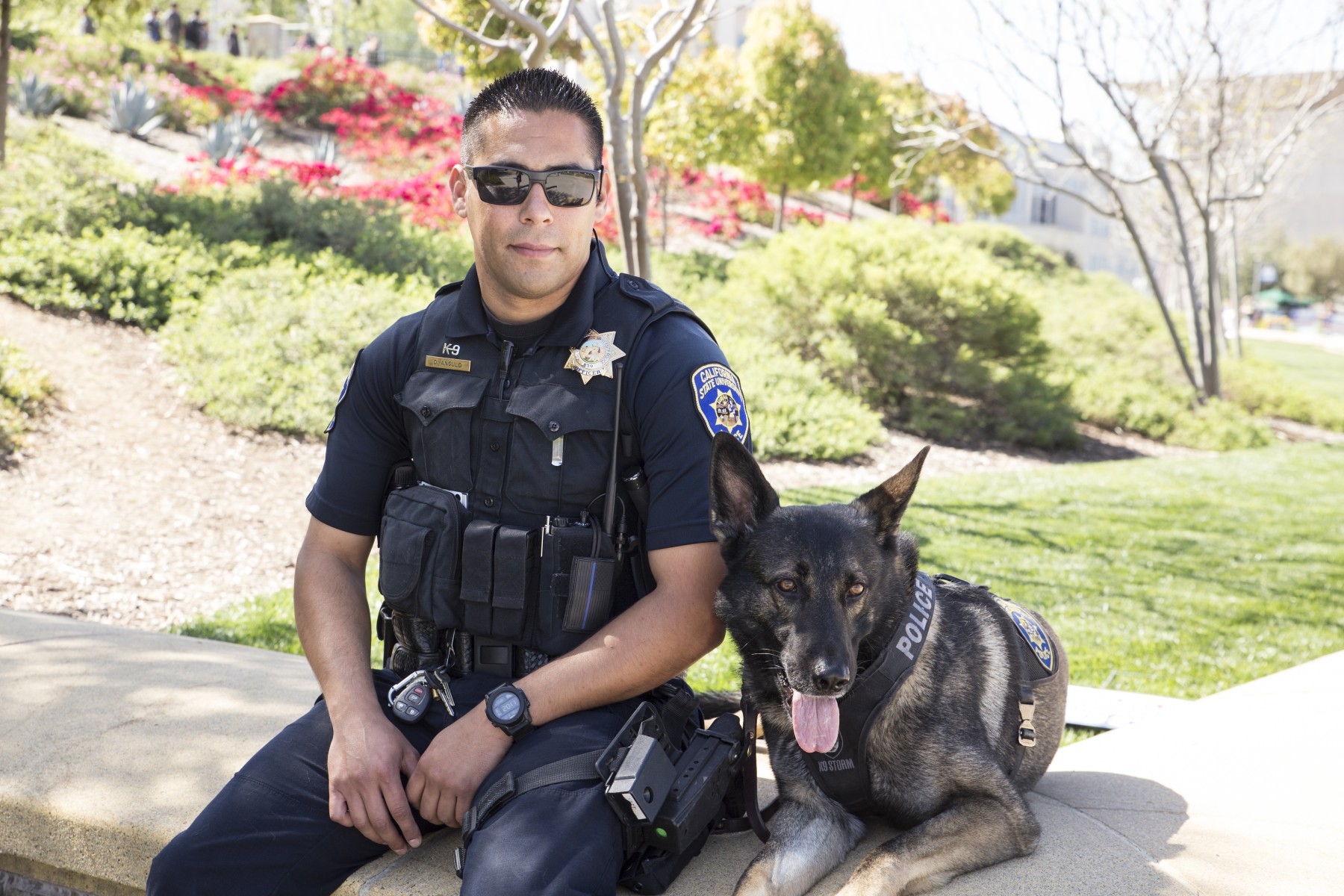 Sgt. David Angulo says of his K-9 Armor, “He's been my partner for the last seven years. It's amazing how attached we get to our partners.” Armor is retiring this month after seven years of service at CSUSM.

It was Cai Steffler’s first week at his new job, and as he was settling in for his third day of work he became startled when he looked down and saw a German shepherd at his desk. Steffler didn’t grow up around dogs, and he was apprehensive.

At first, Steffler thought he got himself in trouble because Sgt. David Angulo and a K-9 police dog were there next to him. But as he looked around the room, Steffler quickly realized that this seemed like a routine welcoming visit.

Steffler saw how excited people from different departments were as they came to pet Armor, Cal State San Marcos’ K-9 police dog for nearly seven years. He soon realized how much Armor meant to the campus.

“I noticed that everyone in our office had treats for him,” said Steffler, an environmental health and occupational safety specialist on campus. “They had dog treats at their office because Armor would come to visit every single office.”

Talking to Angulo and getting to know Armor helped Steffler become at ease being around the K-9 and other dogs.

“It was really special to see their bond and how they work together,” Steffler said.

Armor is set to retire after this year’s commencement ceremonies, shortly before he turns 11 years old. Armor will continue living with Angulo after he retires, along with the next campus K-9, Hans. The CSUSM University Police Department is raising funds for the first-year expenses of acquiring Hans, as well as a K-9 vehicle and supplementary equipment and training.

“Armor has been here longer than some staff members,” Angulo said. “It's going to be even harder for me to go to work without him. He's been my partner for the last seven years. It's amazing how attached we get to our partners. And it's very evident when I'm trying to go to work and he's trying to bust his way through and I have to tell him no. It’s heartbreaking. I knew it was going to be hard. I didn't realize it was going to be this hard. I think it's a little easier because I have Hans now who kind of fills that void. But as soon as I get home, it's evident that Armor is losing his head. He wants to go to work.”

Angulo and Armor have long been recognized as a strong duo on campus. If Angulo is spotted without Armor by his side, he is ready for people to ask where about the beloved K-9. He also is used to people ignoring him and going straight to pet Armor. But he doesn’t mind because Angulo loves when the campus community connects with Armor.

“Armor would come in and we would just be rubbing his belly, and it provided us with a calmness,” said Jennie Ruiz, the associate dean of students. “Whenever he enters a space – and I've seen it with students, too – people just kind of light up around him because he's so sweet, so friendly. And he'll just kind of let you snuggle up with him. He definitely provided us with some sweet comfort when he would come into the office.”

Armor’s contributions have extended well beyond campus. Armor is able to detect 20 explosive odors and he is the only explosive detection canine in North County and one of seven in the 23-campus California State University system.

Angulo and Armor have attended the Golden Globe Awards together as well as presidential debates, political conventions and professional sporting events, including Major League Baseball and NFL games. They also regularly contribute to K-9 responses throughout San Diego County.

It has been an amazing journey for Angulo and Armor since their partnership began in 2015.

Angulo learned about an opening for a K-9 officer early in his career at CSUSM, and he was eager to pursue the opportunity. Angulo trained with the nearest K-9 unit in Northridge on his days off for six months to gain experience for the position. He was able to gather a better understanding of a K-9’s behavior and the training process while shadowing the K-9 officers.

Angulo was then matched up with Armor after completing the interview process.

“This opportunity showed itself really early in my career,” Anuglo said. “I was extremely lucky, and it usually doesn’t happen that way. I kind of just ran with it and made sure I did everything I could to make sure that the program continued to succeed.”

Now, almost 10 years later, Angulo encourages his colleagues who are interested in being K-9 officers to join him while he is working with Hans.

“Armor is a part of my family,” Angulo said. ”Hans will be just as part of my family. And I couldn't trust anyone else to be at home with my wife and kids. They'll be well taken care of. I'm very lucky.”