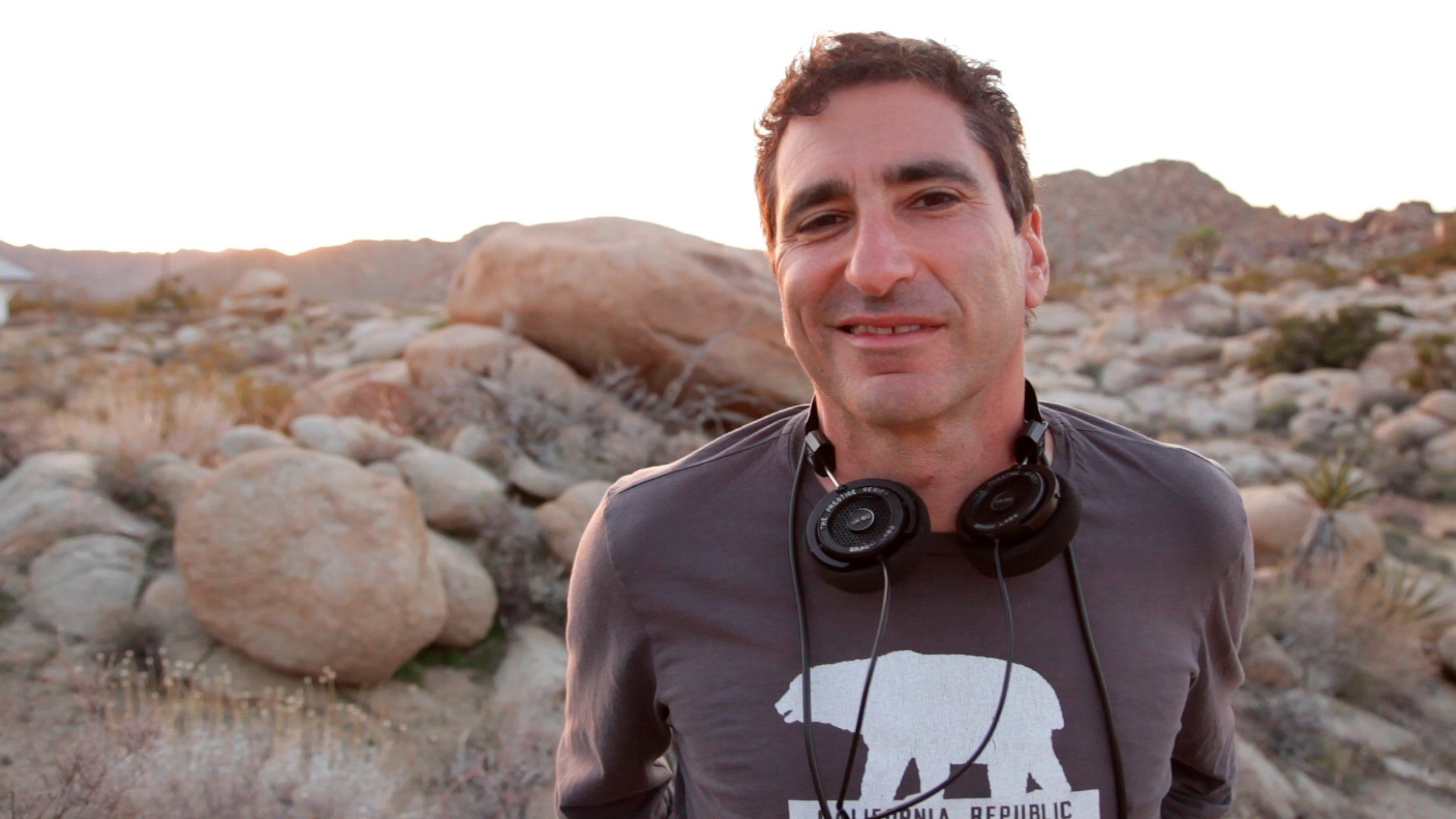 Jonathan Berman
The filmmaker on the set in Joshua Tree

It was during the promotion of his last documentary, “Commune,” about a decade ago that filmmaker and Cal State San Marcos professor Jonathan Berman encountered the subject that would engage and inspire him for many years to come.

Berman was flipping through a book called “The Visionary State: A Journey through California’s Spiritual Landscape” when he came across a photo that stopped him cold. It was of a gleaming white dome, vaguely planetarium-like, rising from the middle of the barren Mojave Desert, with a sign perched on it that reads, “For basic experimentation in life extension.”

“I was like, ‘I gotta go there, I gotta check this out,’ ” said Berman, an associate professor in Art, Media and Design at CSUSM. “I threw my camera in the back of the car and headed on out there.”

What he found, just north of Joshua Tree National Park, was a structure called The Integratron, the creation of a former aviation engineer named George Van Tassel who built it supposedly at the instruction of aliens from Venus that he claimed to have visited him in the desert. The more Berman learned about this mysterious building, the more obsessed he became.

“I felt a little like Richard Dreyfuss in ‘Close Encounters of the Third Kind,’ ” he joked.

So, for his sabbatical from CSUSM in 2011, Berman moved up to the Joshua Tree area to embed himself in the community and begin work on his next project. The result is “Calling All Earthlings,” a documentary that both looks back at Van Tassel’s fascinating life and work (he died in 1978) and explores the rich spiritual subculture surrounding The Integratron through the eyes of current denizens of Joshua Tree.

The movie premiered theatrically in Los Angeles and New York over the summer, was featured at film festivals in Sedona, Ariz., and Maui, and in late August  became available for download on iTunes and other video on demand services. It also has been reviewed by Newsweek and the Los Angeles Times, among others.

“It’s been a wild ride,” Berman said of the rollout of the film, which included a two-hour interview on “Coast to Coast AM,” a famous late-night radio talk show that frequently deals with paranormal topics or conspiracy theories.

And Berman had quite a whopper in the form of Van Tassel. A successful employee of Howard Hughes’ aviation company in Los Angeles, Van Tassel suddenly ditched his comfortable life in the post-World War II industrial world to move his family to Landers, a desert community in the shadow of Giant Rock, a seven-story-high boulder regarded as sacred by American Indians.

Six years later, in 1953, Van Tassel claimed to have been contacted by a spaceship that landed on an airstrip near his property. He said the visitor was from Venus, looked like a human, and spoke in perfect English. The Venusian told Van Tassel that his name was Solganda and that he was 700 years old. Van Tassel said he boarded the craft and was given a secret formula to build a machine that would suspend the laws of gravity, extend human life, and facilitate time travel.

Moved by the message, Van Tassel dutifully began construction on what became The Integratron, and he also started hosting the annual Giant Rock Spacecraft Convention, a gathering of UFO enthusiasts and alien “contactees.”

“George was a big conspiracy person,” Berman said. “It’s the classic contactee message: The aliens came down and said, ‘Look, the whole thing with the atom bombs, you are messing with the universe and we have to come take care of you primitive people down there on Earth.’

“One of the things that fascinates me is here’s a guy who has a good union job, may or may not have known Howard Hughes but worked for his company, leaves the job, leaves L.A., moves to the desert, sleeps on the desert floor with his family, has a meeting with this space person, allegedly, and the message was one of peace and love. And he’s leading these gatherings that are like the original Burning Man – go out to the desert and let’s all get together and talk about alternative ideas.” 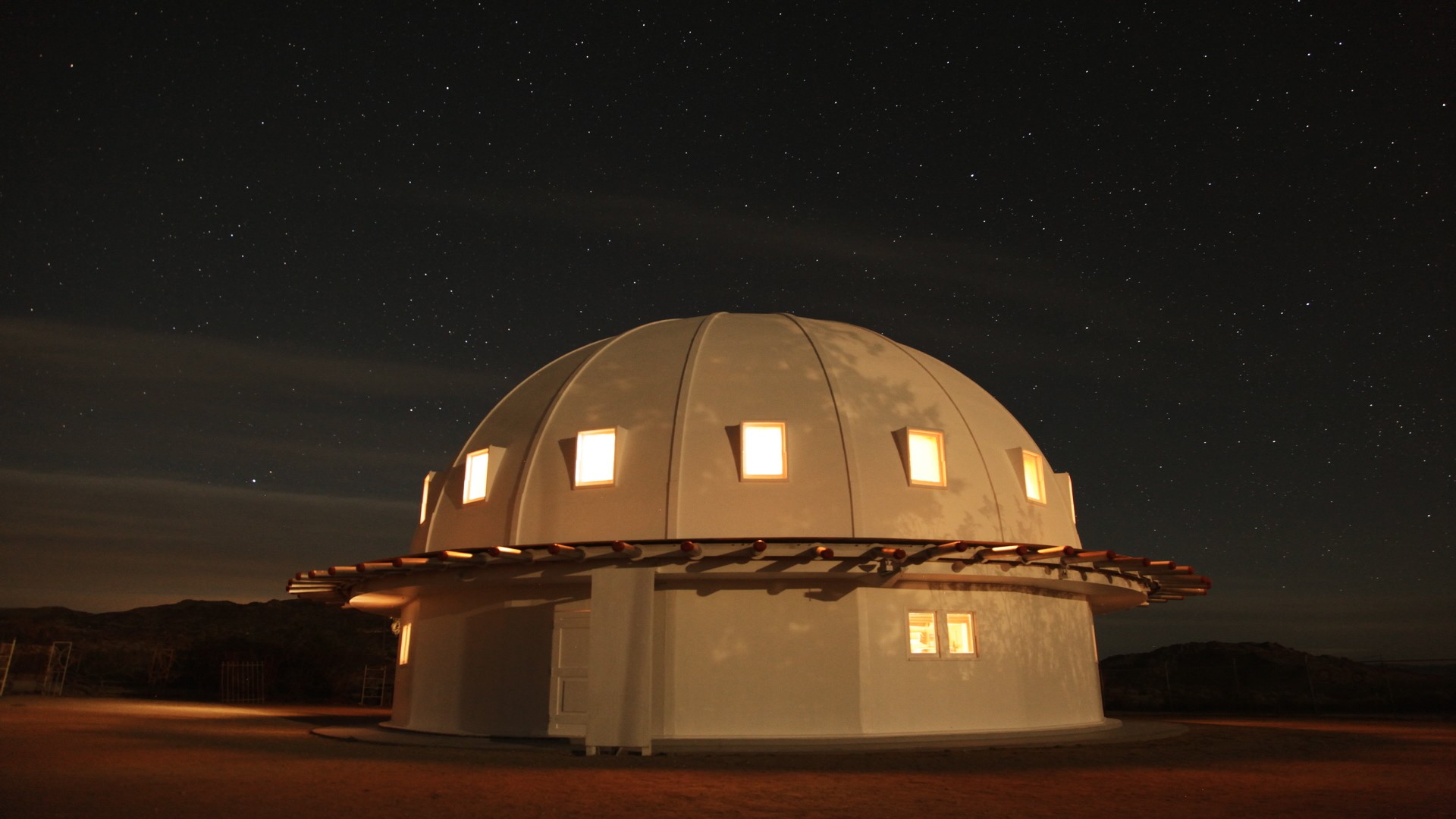 The Integratron
The mysterious dome in Landers, Calif., from "Calling All Earthlings," a feature documentary

In making the film, Berman interviewed a couple dozen people, including Van Tassel’s son-in-law, Daniel Boone, who lives near The Integratron, and Joanne and Nancy Karl, sisters who bought the building in 2000 and still operate it as a tourist attraction. Berman also relied on the hands-on help of half a dozen CSUSM students as well as several faculty members. Judy Bauerlein, an associate professor of theatre, played the voice role of a concerned citizen, and Kristine Diekman, David Avalos and Tony Allard advised on the editing of the film.

“One of the best things about working in the School of Arts is the fact that I get to collaborate with my faculty colleagues,” Bauerlein said. “I’m an actor, so having filmmaker colleagues to work with is exciting and inspiring. I loved sharing creative research time with Jonathan, and I’m really proud of the film!”

Said Berman: “One of the great things about these films is that I get to make them with students -- students who shot the film, who helped work on the poster, who did some editing, but hundreds in the process of screening. Screening is where you shape this kind of creative documentary. It’s a conversation. The practice of making the work and sharing that work was invaluable.” 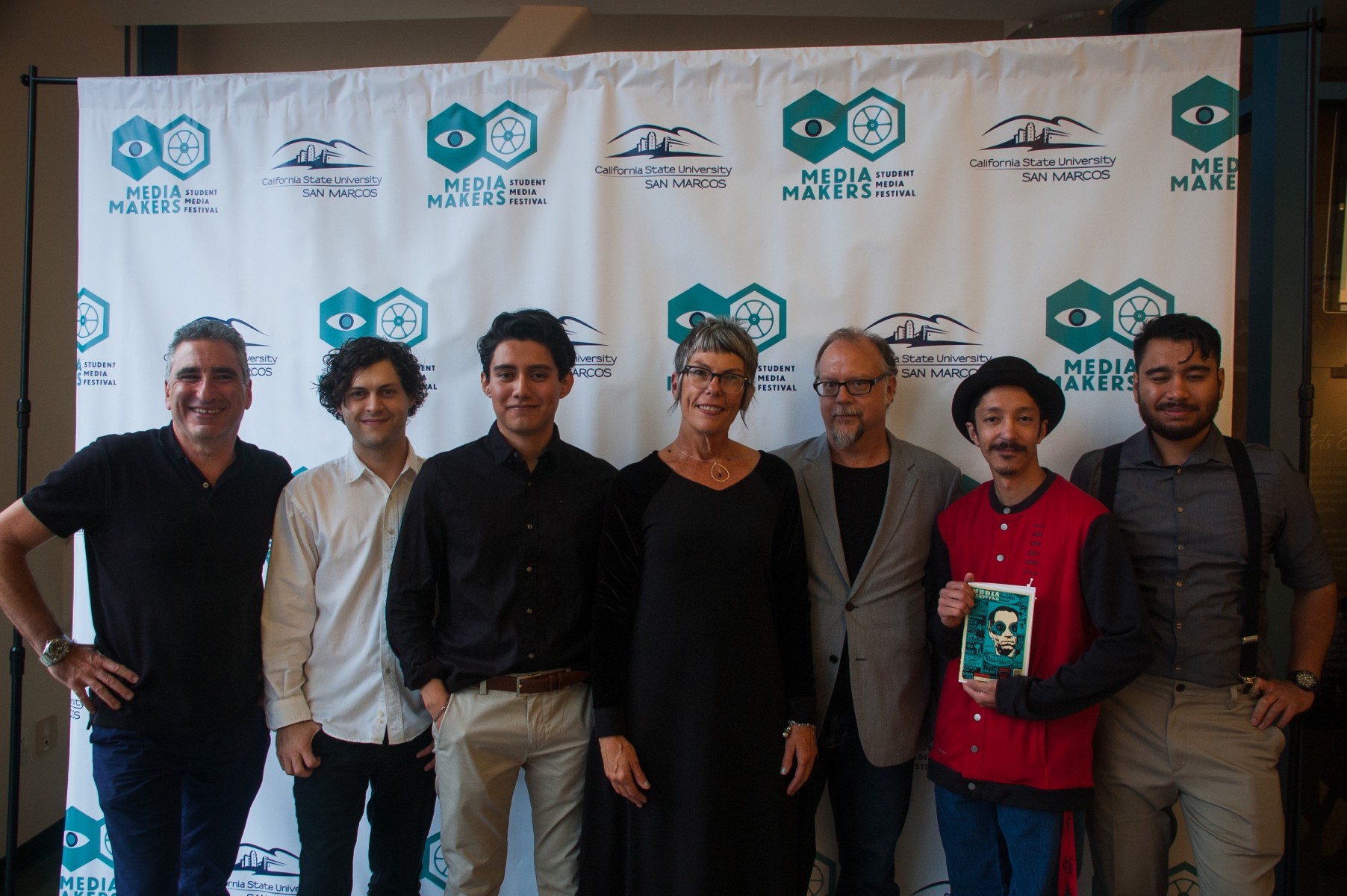 Jonathan Berman
The filmmaker (left) with some CSUSM colleagues and students

Berman was so fascinated by the material behind “Calling All Earthlings” that he’s hoping to use it as a jumping-off point to produce a “Mad Men”-style TV drama spanning from the 1950s into the ’70s, “set against that meeting of science and spirituality and government and leadership.”

But it’s hard for him to leave George Van Tassel behind.

“George, you could say, was the godfather of the Aquarian age, the first hippie in a way,” he said. “You leave your union gig to move to the desert and meditate under a rock?

“This is a film for Burners and Boomers. Anyone who’s heard of or considered coming to Burning Man and anyone from the Baby Boom generation.”

He adds wistfully, “Or anyone that somehow, in this day and age, still believes in magic.” 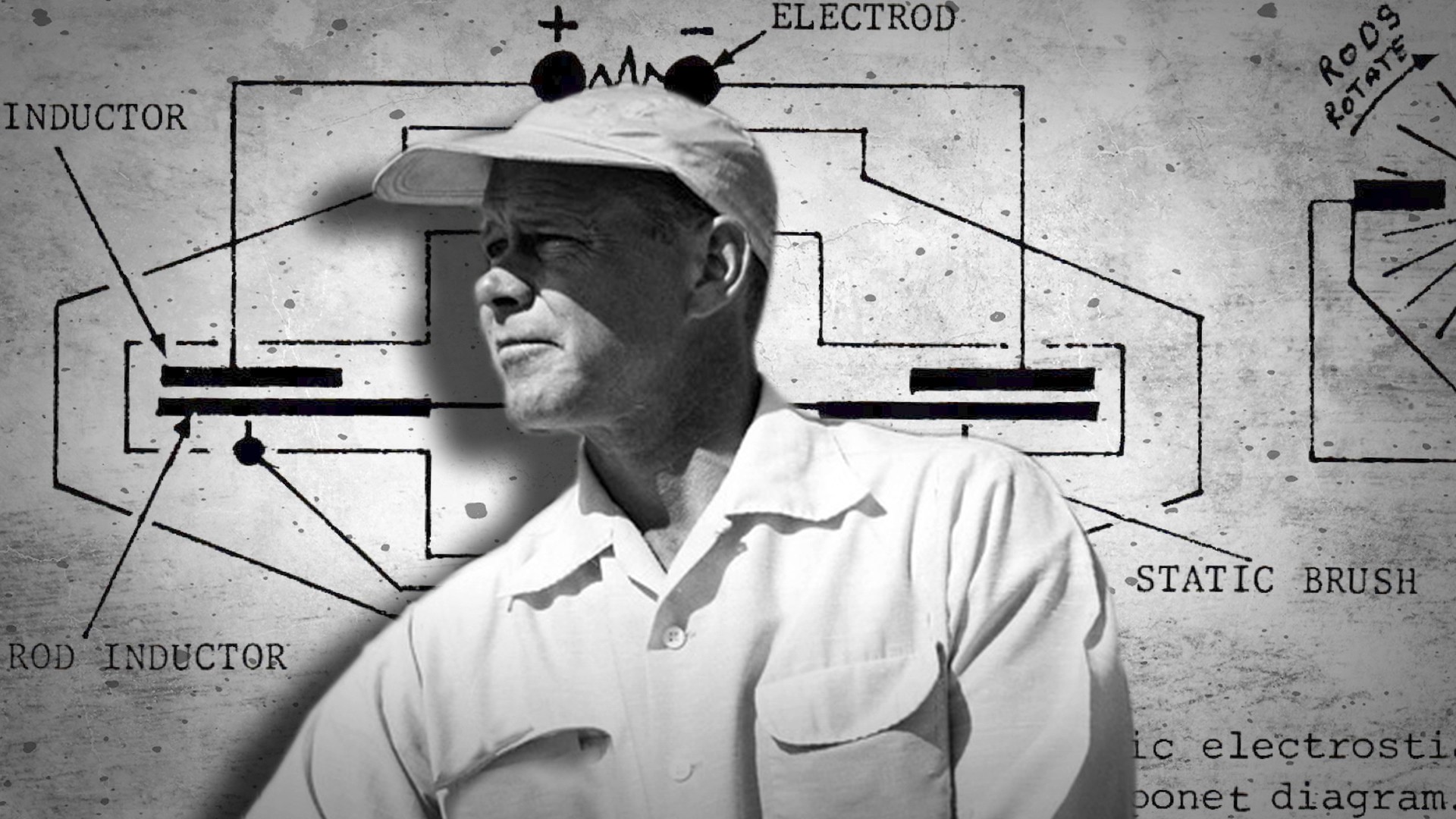 George Van Tassel
The aviation engineer moved to the desert and claimed to have met visitors from Venus in 1953 who told him to build a time machine and life rejuvenator. From "Calling All Earthlings," a feature documentary