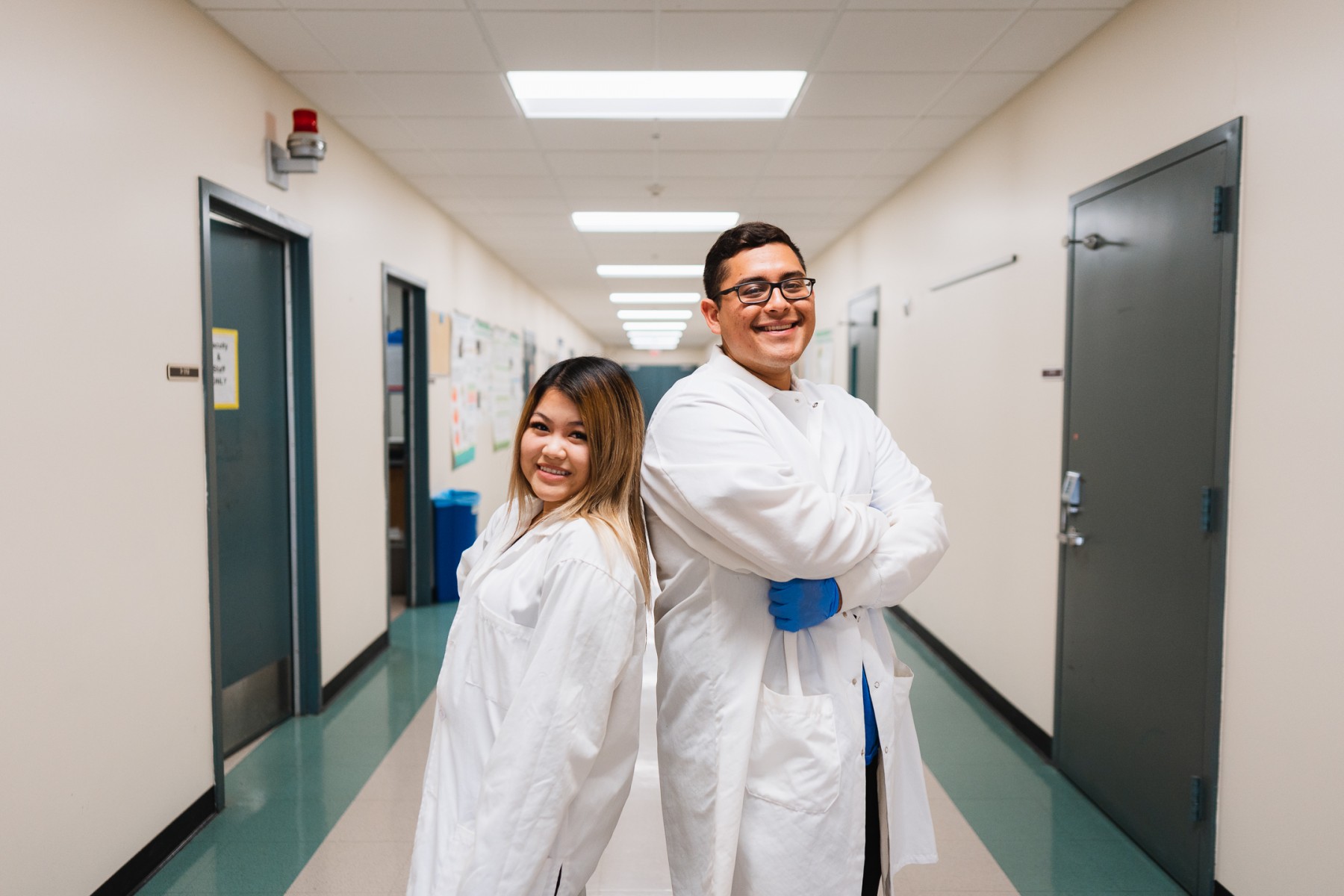 Theresa Mai and Luis Hernandez will each receive their master's in biological sciences in May. Photo by Long Truong

Growing up, Luis Hernandez had little money, even less privilege and zero examples in his immediate circle of a college degree or a career skill beyond self-motivation and hard work.

But he had parents who instilled perseverance, gratefulness and the promise of brighter days ahead through building an academic foundation.

Theresa Mai has no teachers, doctors or scientists in her family either. Her parents emigrated to the United States during the Vietnam War, and they still only speak Vietnamese. Their path to success in their new country was forged through one way and one way only: work. And despite that work ethic, Mai grew up extremely poor without examples of advancement through academic means.

But what she did have was love and curiosity.

What Hernandez and Mai both had growing up in Southern California was a sliver of opportunity. And sometimes that’s all it takes.

The two Cal State San Marcos biological sciences graduate students – both currently working in biology professor Jane Kim’s lab – are about to embark on the adventure of a lifetime. While their decisions growing up often came between helping the family and doing homework, they’re both now deciding which great Ph.D. programs in the country to attend. 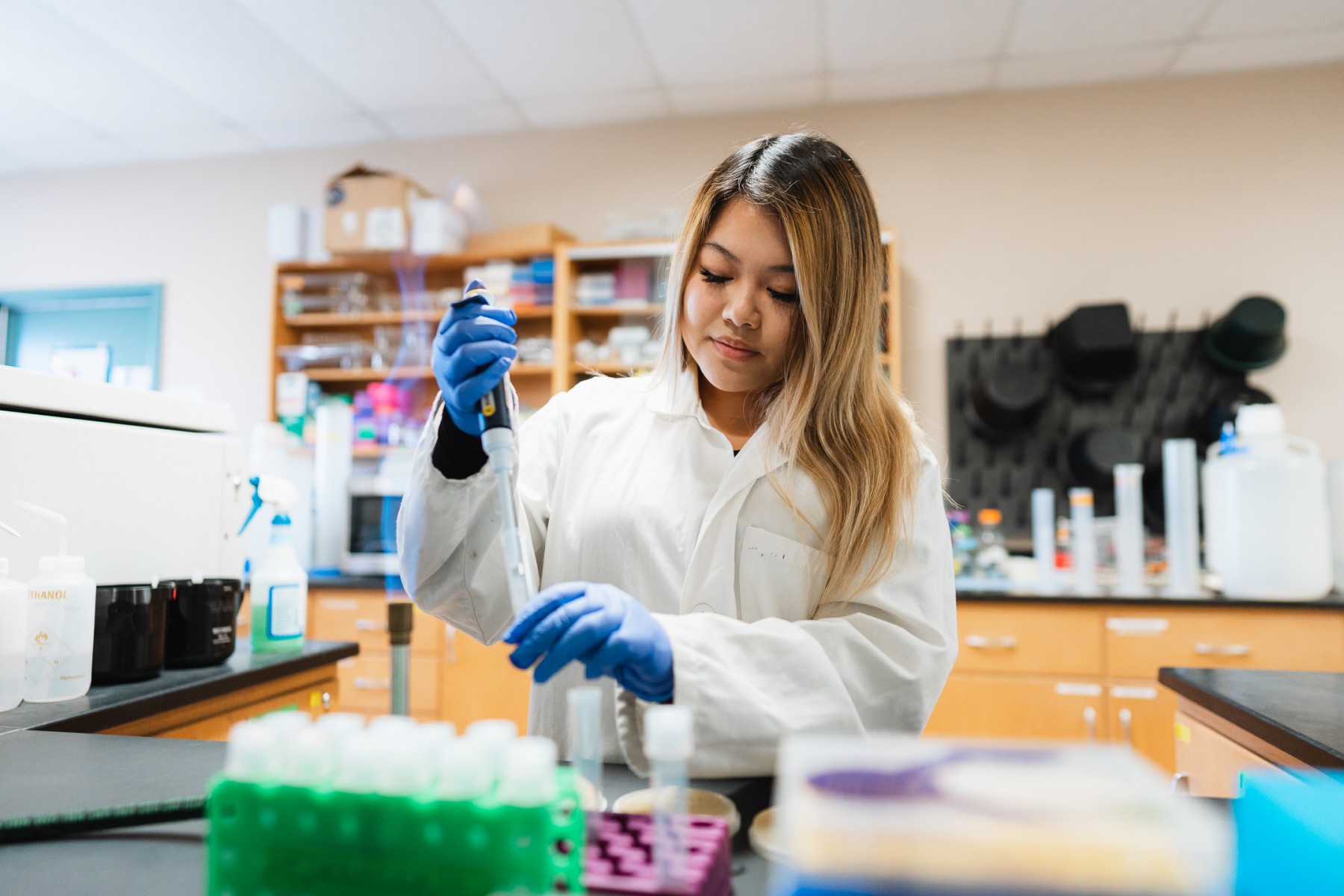 Theresa Mai, who will receive her master's in May, is considering Johns Hopkins, Stanford and USC for her Ph.D. Photo by Long Truong

“To be honest, I didn't have anybody to inspire me,” said Mai, who graduated from the former Serra High School in nearby Tierrasanta. “No one told me that it was even possible for someone that looks like me and came from a background like myself to even be working in the lab going to school achieving a higher education. No one in my family told me go to college. It was something that I pursued on my own. My parents didn't really understand that we could go to college. But I had their support no matter what.”

Heavy hitters all of them.

“The most important thing is I just want to be happy,” said Mai, who also did her undergraduate work at CSUSM. “The one thing about getting accepted to these prestigious schools is that there is kind of that culture where things can be a little bit cutthroat. So the most important thing to me is happiness and having the same support that I received here at San Marcos.”

While Mai earned her bachelor's degree at CSUSM, Hernandez earned his at Cal State Fullerton. His love for molecular biology had its origins in his high school AP biology class. It further developed at CSUF, and upon arrival at CSUSM as a graduate student, he was introduced to Mai in Kim’s lab.

It was truly a unique experience because not only were they in the midst of the pandemic, but Kim was on maternity leave.

The original plan was for them to start working in summer 2020 and receive training from graduating students. Instead, due to tight restrictions to on-campus research throughout the year, they were only approved to work on campus for 10 hours per week beginning January 2021.

“Both Luis and Theresa have overcome many challenges resulting from the COVID-19 pandemic,” Kim said. “Both have made considerable research progress with limited research hours during the start of their M.S. programs. I was able to offer only limited guidance. Nevertheless, Luis and Theresa were able to write their own thesis proposals, initiate experiments, learn how to organize their time effectively, and ask for help as needed. I am excited for them to defend their M.S. theses and start their Ph.D. programs this fall.”

Although Hernandez admits the pandemic caused a huge setback because access to the lab was limited, taking classes online was perhaps a greater challenge. It was hard to develop a strong relationship with the fellow members of the cohort because of the lack of face-to-face interactions.

The unique circumstances helped them learn how to work without someone holding their hands through the process. It helped them mature in their scientific approach and to learn how to perform experiments on their own.

All done with the distance guidance of Kim.

“Dr. Kim has been a role model for how to approach science and teaching,” Hernandez said. “She is super organized and really demonstrates how to break down information to those that are brand new in the lab like Theresa and I were when we started. For the research aspect, she continually challenges you to push past current limitations. Without her and her support, we would never have garnered the skills to become successful in the pursuit of our future goals.” 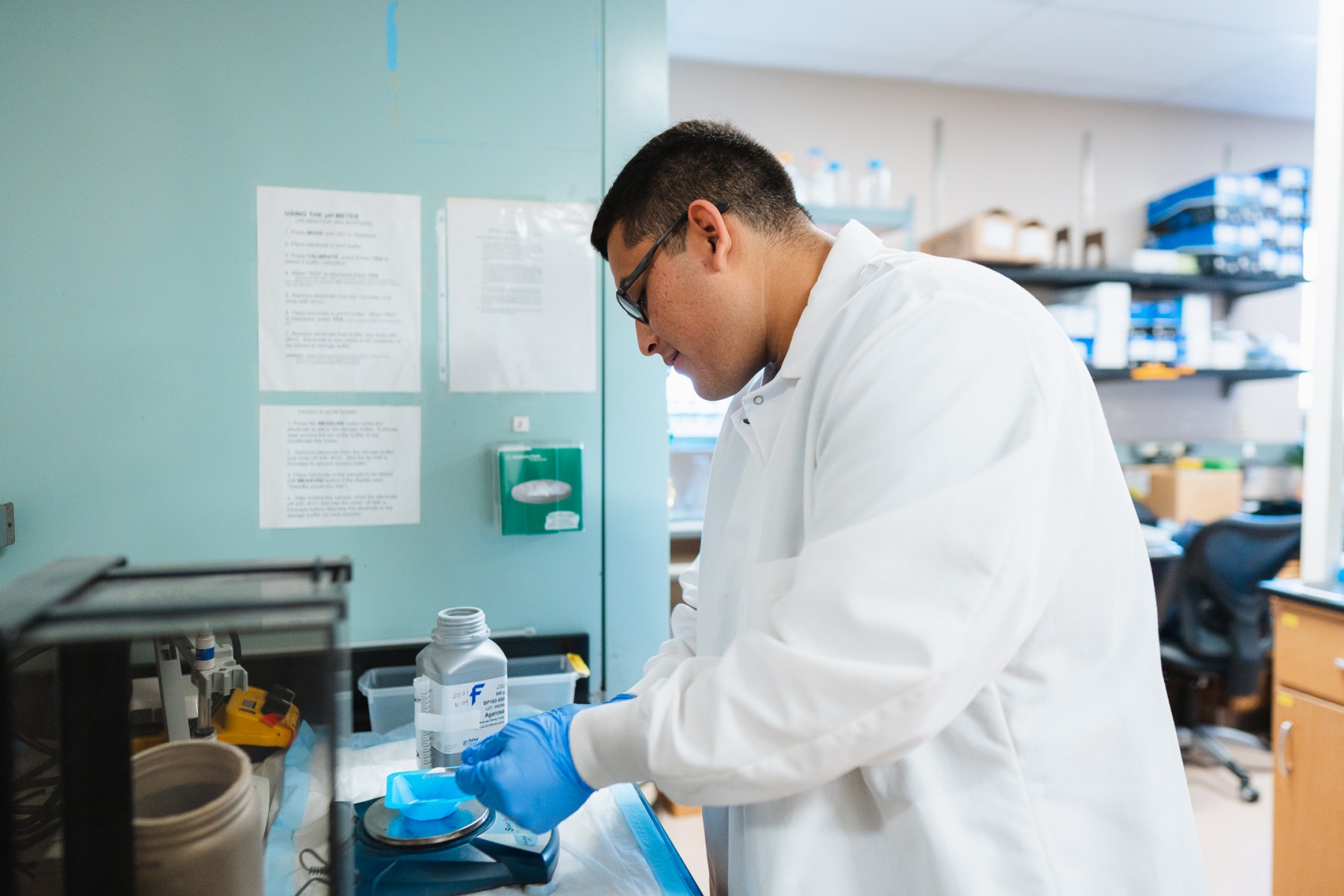 Luis Hernandez, who will receive his master's in May, has been admitted to eight Ph.D. programs, including Stanford, Cal, UC San Diego, UC Irvine, Washington and Michigan. Photo by Long Truong

Hernandez and Kim met in January 2020 at the CSU Biotechnology Symposium when he was presenting his undergraduate research.

In researching M.S. programs, he talked to CSUSM students who were in Kim’s lab at the time. On the last day of the conference, he sought out Kim to express interest in applying to be a graduate student in her lab.

“This display of initiative, motivation and curiosity stuck out to me as something that a senior graduate student would do in finding a postdoctoral research position,” Kim said. “I have been able to observe these same characteristics strengthen and flourish over the last two years that Luis has been a student in my lab, and I believe he will hit the ground running as a Ph.D. student.”

Mai didn’t exactly have that same initiative upon her arrival on campus as a freshman. In her words, she stumbled upon the science hall to find posters on the walls describing research projects. She was intimidated but wanted to contribute her own research, hang her own posters.

Thanks to the support and mentorship of her professors, she was quickly able to turn early struggles into a strong finish.

She has a 3.94 GPA during her master’s coursework while working up to 20 hours a week at various campus jobs. One of those jobs is in the Office of Sponsored Projects at CSUSM Corporation.

“Theresa has demonstrated a striking determination and laser-like focus on improving as a scientist and experimental biologist,” Kim said. “She is exceptionally reflective in how she thinks about her research project and continues to grow as a young scientist, a trajectory I anticipate will continue as a Ph.D. student.”

Both Mai and Hernandez have expressed interest in a career in academia. They not only want to teach and perform groundbreaking research, they simply want to mentor students like themselves who didn’t have the same advantages growing up that many others did.

“I would love to come back to academia and just be one of the mentors that have inspired myself and students like myself to do what we're doing right now,” Mai said. “I would really love to be able to inspire students like myself who come from low-income and first-generation students who don't really see themselves being successful, especially in a career in science – and show them that you can do anything that you put your mind to.”