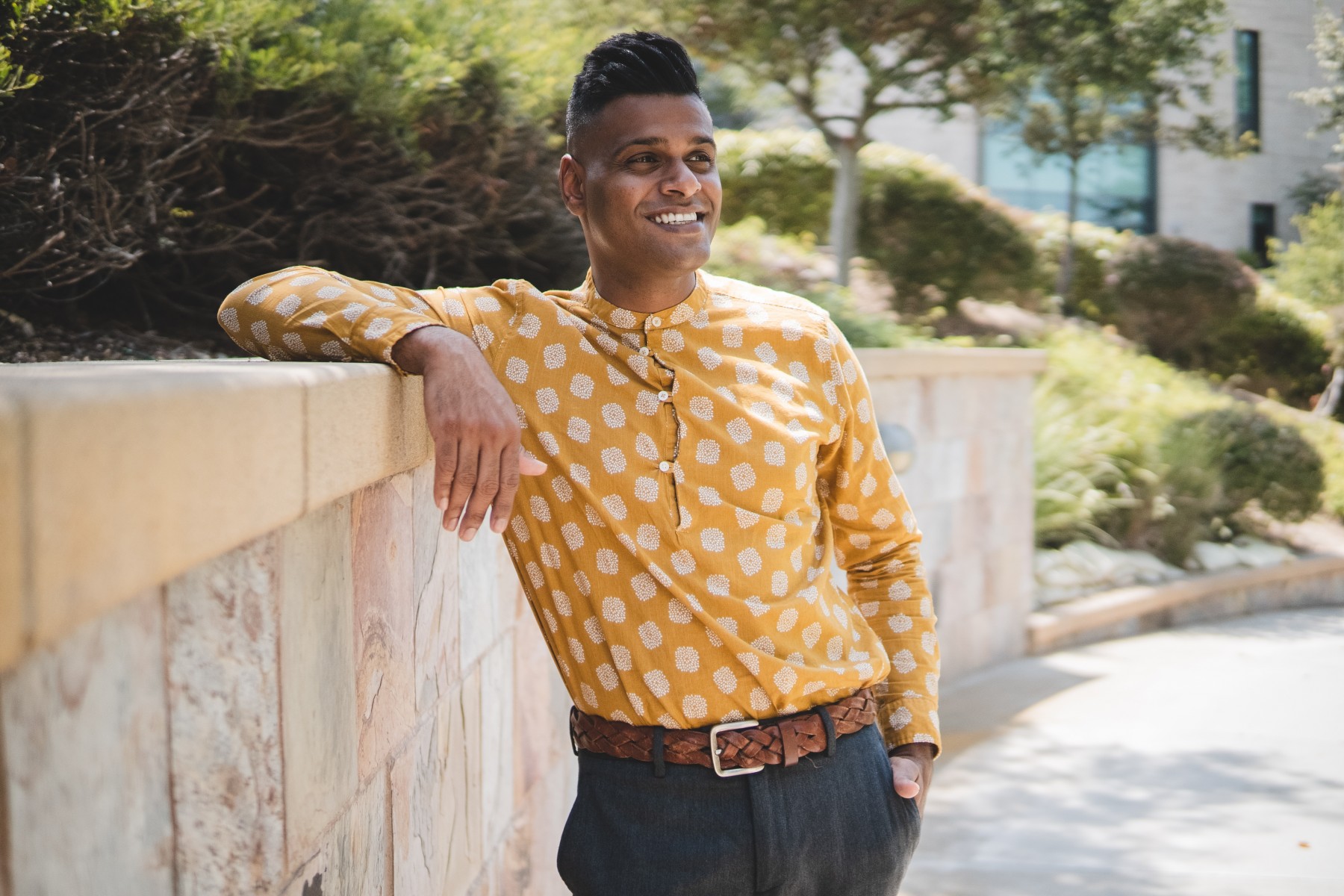 Naturally a glass-half-full person, Arun Sethuraman is known to friends, family and colleagues as a source of happiness and a conduit of positive vibes.

It’s not unusual to see Sethuraman smiling while teaching, sitting in on a meeting or simply walking around the campus of Cal State San Marcos.

But forgive the biological sciences professor if his smile has been extra wide these days.

Earlier this month, Sethuraman was granted early tenure and promotion to the rank of associate professor starting with the upcoming fall semester.

That announcement came on the heels of his National Science Foundation (NSF) CAREER Award being recommended for funding. It’s a prestigious award that puts Sethuraman in rare company as he’s believed to be one of just two CSUSM professors to ever win it. The other was biology professor George Vourlitis in 2002.

Sethuraman’s grant will cover a period of five years and is worth a total of $608,360.

“It's a career-building opportunity,” Sethuraman said. “It’s set up to both engage our student population in science and to make sure that we communicate it. We want to be able to communicate our science to the general public with all sorts of engagement activities and programs.”

The NSF CAREER Award is for early career researchers. The award aims to provide financial support and assistance to those who have just started out on their careers and are trying to establish a program for themselves. Only assistant professors and tenure-track assistant professors can apply for it. The award needs a scientific or public community engagement component for it to work.

That won’t be a problem for Sethuraman, who with an NSF grant earlier in his career as a postdoc student at Temple University established a summer workshop program for high school teachers in the Philadelphia area.

That program trained teachers basic programming skills to take to their high school biology or chemistry classroom after a week of learning different types of exercises.

As soon as next summer, Sethuraman plans on implementing a similar program for San Diego County high school teachers, one in which potentially 25-30 lesson plans can be given to each teacher.

“That’s one part of (the grant),” said Sethuraman, who earned his bachelor’s in computer science from the Birla Institute of Technology and Science in Pilani, India, and his Ph.D. from Iowa State. “The other part is, I write for a popular science blog called ‘The Molecular Ecologist,’ and my goal as part of this career was to incorporate my own graduate students and teach them how to do science communication to the general public. They will work on tutorials and articles, which we’ll then publish as part of the science blog accessible to the general public. So there's a number of other sort of synergistic outreach and community engagement activities that are also part of the brand.”

Sethuraman isn’t waiting until next summer to make his latest impact.

The second annual Research Experience for Undergraduates (REU) program that he and biology professor Betsy Read co-run began on campus last week and runs for 10 weeks.

There were more than 250 applicants from all over the country for this year’s program. Ten students will do research projects in different labs and receive training in genomics and bioinformatics. The program will end with a poster presentation on Aug. 13.

Whether it’s earning tenure, receiving a prestigious award or being the driving force for an important summer program, Sethuraman has big goals for his career beyond just the classroom and lab.

“I've already started to think about sabbatical years and things that I want to do in those years,” he said. “My immediate goal would be to teach a lot of genetics classes here. I've noticed over the years that genetics textbooks and resources are not very inclusive, and actually that's also written into my NSF CAREER grant.”

Last spring, Sethuraman co-taught a one-unit seminar course with kinesiology professor Richard Armenta that is open to the entire campus called the genetics of minorities. In that course, he discussed the genetic basis behind ethnic and racial minorities, sexual orientation, weight and people with pre-existing conditions, and how there are different types of minorities and disabilities that are also affected by sociological perspectives.

“It’s also actually written into my CAREER proposal that the goal is to offer that class as a three-unit course on campus to explore the sorts of things that are not in the textbooks and not talked about or not studied enough just by virtue of the fact there's no resources in parts of the world that are highly underrepresented or for sections of the society that are highly underrepresented,” Sethuraman said. “So my goal, whenever I'm eligible for sabbatical, would be to eventually write about genetics of minorities in a much more inclusive genetics book.”