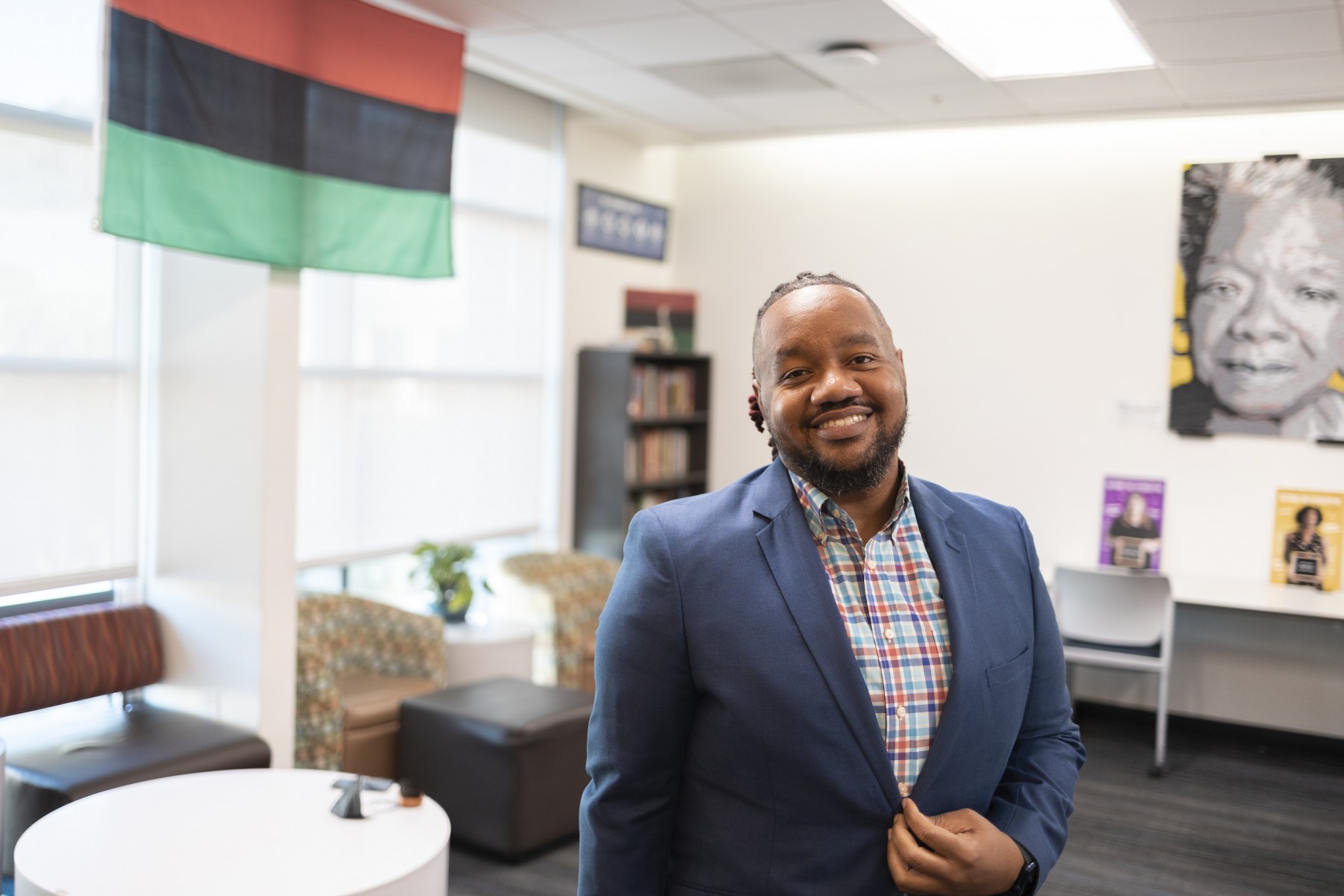 John Rawlins III is director of the Black Student Center, which is celebrating its five-year anniversary this month. Photo by Andrew Reed

When John Rawlins III set out last fall to create an achievement program for Cal State San Marcos’ Black Student Center, of which he’s the director, he knew just where to turn for inspiration.

It might not roll off the tongue, but that word has served as Rawlins’ guiding light for most of his adult life. It’s a term from the East African language of Kiswahili and one of the seven principles of Kwanzaa. Literally, it translates to “familyhood.” To Rawlins, it means the process of working together as an extended family to build and maintain a cohesive community.

He was first exposed to the word in college; it was the name of the residence hall where he lived at Cornell University. It grew to be part of his DNA during his second year when he became a resident adviser, a role he held for the rest of his time at Cornell.

“In that residence hall, it was about how we use the best of who we are to support one another and to foster this community,” Rawlins said. “That’s something that has always stuck with me, and it’s a lot of what I put into my work as I think about building community.”

The spirit of Ujamaa has infused Rawlins’ work during his 15 years as a student affairs professional, and he has made it a core piece of his philosophy at CSUSM since being hired to direct the Black Student Center in July 2019. Later this month, the center will celebrate its five-year anniversary, and Rawlins will have been in charge for more than half of its existence.

The dawn of the COVID-19 pandemic less than a year into his tenure delayed some of the initiatives he planned to institute through the BSC, but he has strived to make up for lost time. He and his staff started the Brotherhood Alliance for male Black students and the Circle of Sisters for female Black students. Fast on their heels came the Association of Black Athletes, the Black Psychology Student Association and the Melanated Art Collective, the last of which is an organization focused on art and creativity in the Black experience.

“We keep growing, and it’s exciting to see,” Rawlins said. “We’ve always had a strong Black Student Union, but these groups are giving students the opportunity to say, ‘I want more out of my education that is attached to my identity.’ And even though these are things that I’ve developed, they’re really student-driven initiatives. We’ve put them in the hands of the students to be leaders.”

Rawlins has proven to be just the BSC director that Dr. Gail Cole-Avent sought when the associate vice president of Student Life hired him from his position as director for leadership development and training at Alpha Phi Alpha Fraternity, the first intercollegiate Greek fraternity established for African American men. But in a sign of his capability, his duties have only expanded in the 2½ years since.

For almost a year, he served as interim director of the Gender Equity Center, and in September 2020, President Ellen Neufeldt appointed him special assistant to the chief diversity officer (now Dr. Aswad Allen), tasking him with engaging students in CSUSM’s efforts around diversity and inclusion. He’s also vice president of the Black Faculty and Staff Association.

“Since his arrival, his impact has far surpassed my vision and expectations,” Cole-Avent said. “Within his time here, he has not only elevated the collegiate experience for Black students, but he also has demonstrated his commitment to the larger population.

“His work is vital and will continue to create pathways for our students that include understanding the multiple ways that they can take full advantage of their CSUSM experience, whether it is within the classroom, through leadership roles, engagement in the community (internal and external), and ultimately as alumni who will mentor the next generation.” 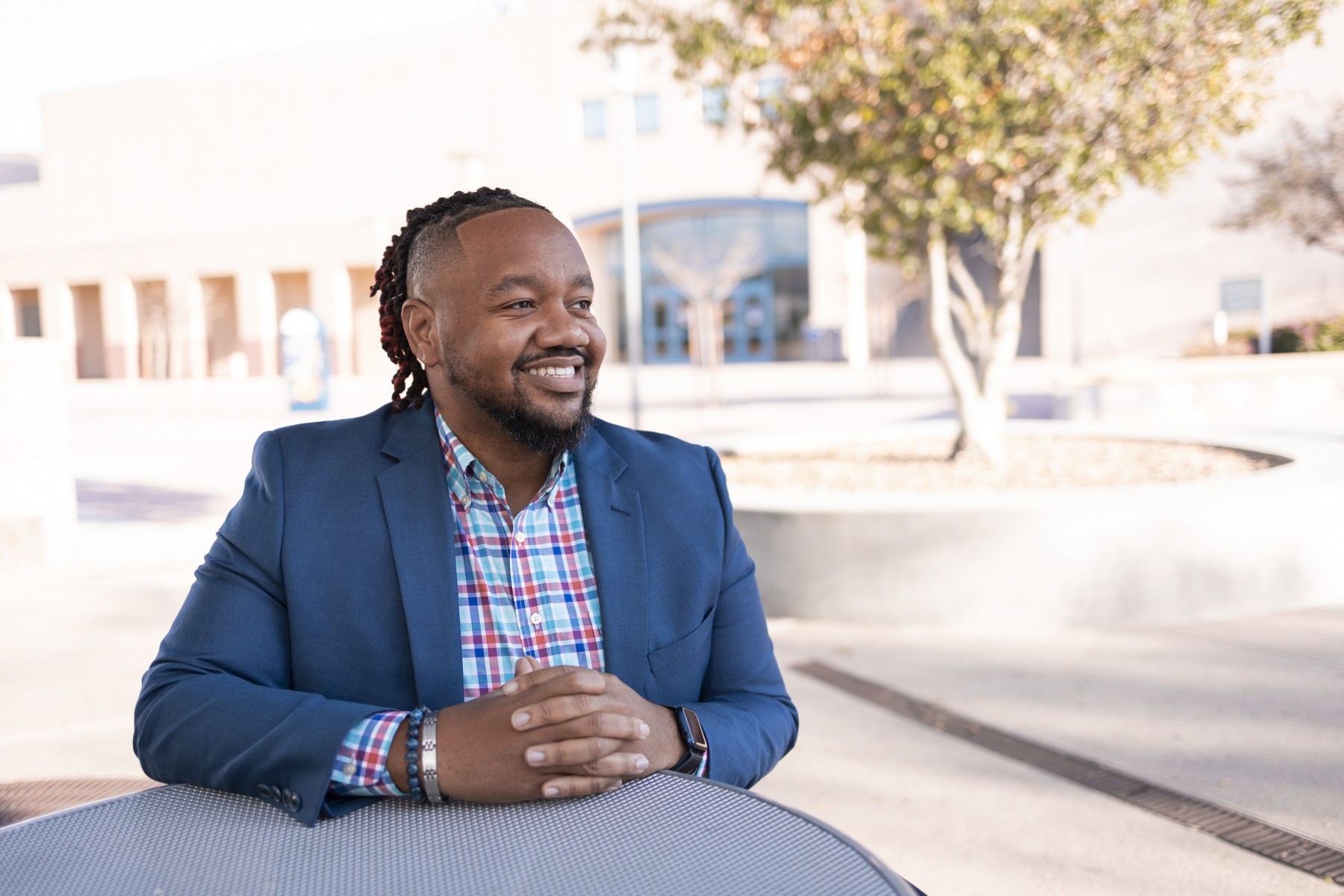 “We keep growing, and it’s exciting to see,” John Rawlins said of the Black Student Center, which he has directed since July 2019. He's also special assistant to Chief Diversity Officer Aswad Allen. Photo by Andrew Reed

When Rawlins, 37, accepted the CSUSM job, it marked his first time even visiting California since he was about 12 years old. He grew up in Washington, D.C., in a family that strongly emphasized education and faith. His mother attended Norfolk State, a historically Black university, and Ivy League schools were never on his radar, in part because he didn’t even know which schools compose the Ivy League. But he received a full tuition scholarship from Cornell and earned a master's from Johns Hopkins. Building on this legacy, his sister went to Dartmouth on scholarship and attained a master's from Columbia.

It was at Cornell that Rawlins first began to grasp the ways in which education can broaden experiences and open doors. As a sophomore, he and some friends got together to create the Men of Color Conference, a series of workshops, seminars and speakers focused on character and professional development among minority men. The conference still takes place almost two decades later (now under the name Men of Color Council).

As a human development major, Rawlins thought he wanted to become a high school teacher. Soon after he graduated, however, he was working for a summer program at Cornell when his supervisor suggested that he apply for a temporary job as interim director for multicultural affairs at Ithaca College, which is less than a mile away from Cornell in central New York. That 10-month appointment turned into eight years at Ithaca as he fell in love with the field of student affairs, especially for marginalized communities.

“It helped me to see the importance of the work that we do, which is why I'm still in it today,” he said. “I'm always an advocate for, how do we make these voices heard? How do we make these communities visible? Not just from a marketing standpoint, but how do we infuse these specific cultures into the larger culture of the campus? I've had fun doing that for these many years.”

The Rawlins family’s emphasis on education manifested itself in the academic and career path John has followed. Its emphasis on faith manifested itself in the other great passion of his life: gospel music. He sang in a church choir almost from the day he could walk, and he played in school bands and orchestras throughout his K-12 years. At Cornell, he didn’t truly feel comfortable on campus until he joined the university choir. When he moved to the San Diego area, one of the first things he did was find a church where he could sing in the choir (he’s now directing it).

“Music has always been my safe place,” he said.

Music also has opened doors. Through a childhood friend, Rawlins was invited in 2013 to be part of a choir that toured nationally with jazz legend Wynton Marsalis, and that same opportunity presented itself several other times in the ensuing decade. One of the conditions of him taking the CSUSM job in 2019 was that he be allowed to travel to New York City that November to perform some dates with Marsalis.

In recent years, he has branched out to recording his own music, and his songs can be found on Spotify and all other major streaming services.

“I used to keep my music separate from my career, but now I don't care anymore,” Rawlins said. “When I came for a campus visit after I accepted the position, one of my now-colleagues said they Googled me and listened to my music and loved it. That was a connecting point when I first got here that was nice to have.”

A connecting point that’s another example of Ujamaa in practice.

“Some of our students are still getting used to using the term itself. They’re still learning to be able to say it over and over,” he said. “But they know the principle in action. They know that this is how we do things in this community to bring out the best of who we are and help each other grow and succeed.”