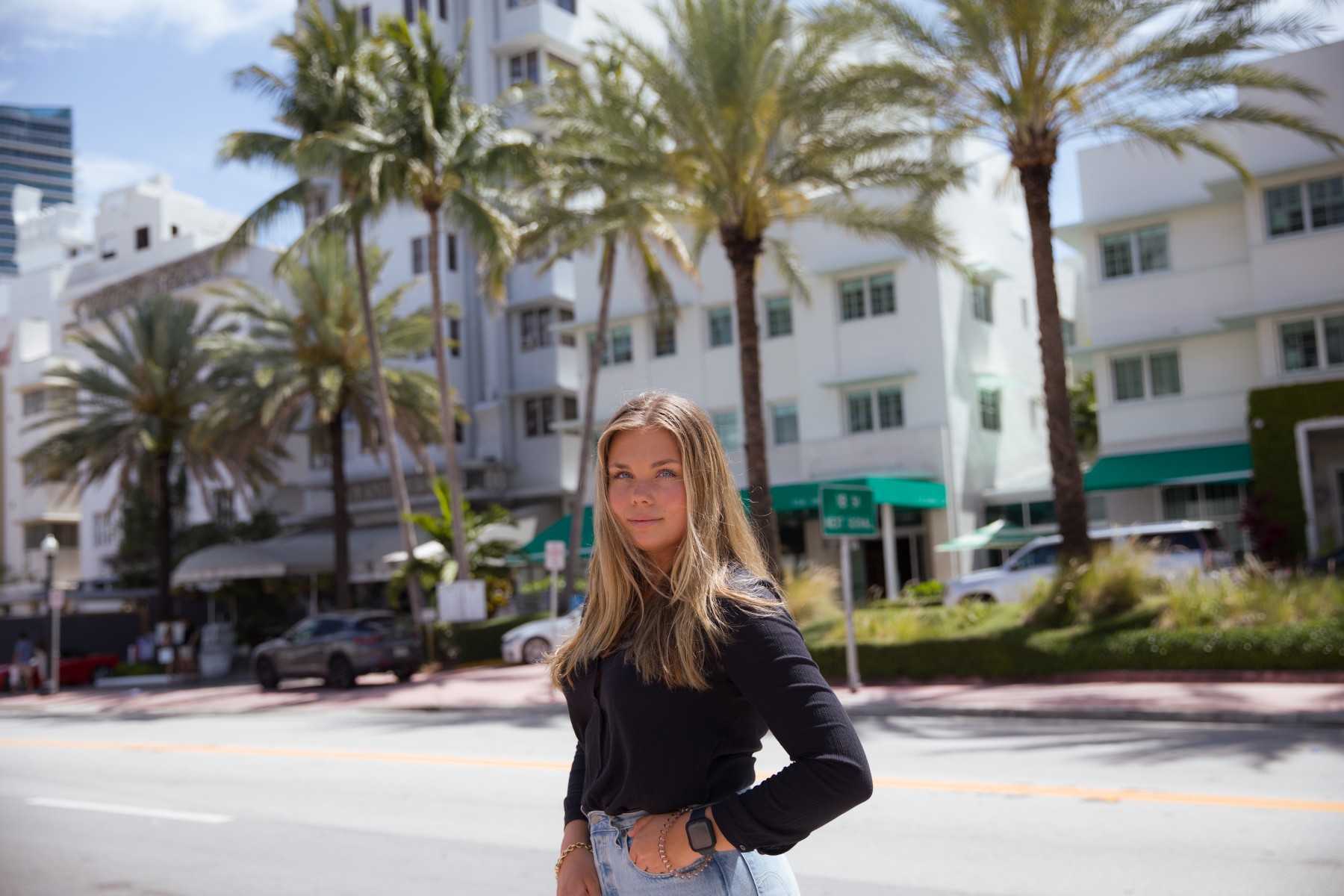 Karolina Lindberg never had many complaints about her epilepsy. She was aware that she wouldn’t be able to drive a bus or become a police officer or firefighter because of her diagnosis. But Lindberg didn’t know her epilepsy would stop her from pursuing her dream career.

Lindberg always wanted to find a career that would allow her to see more of the world while she was growing up in Sweden. She set her sights on becoming a flight attendant for the travel opportunities, but her epilepsy made it impossible. Instead, she became a flight coordinator at Scandinavian Airlines.

Although Lindberg didn’t get to pursue her initial career choice, she still made the leap to see a different part of the world. A chance encounter with a passenger while working for Scandinavian Airlines led her to Cal State San Marcos. Three years later, Lindberg is graduating with a degree in global business management and will be recognized at the College of Business Administration commencement ceremony on May 21 as the Gerevas Family Dean’s Award recipient.

“I have found Karolina to be talented, hardworking and professional in all her communications and academic assignments,” said Eric Rhodes, one of Lindberg's business professors.“She entered our program as an international student with a strong professional background in customer service and finance and incorporates her unique perspective and bilingual capabilities into her academic endeavors here at CSUSM to the benefit of our community.”

Traveling and being exposed to different cultures have always been important to Lindberg. Her father started his career in the Air Force and then became a pilot for Scandinavian Airlines.

Though Lindberg couldn’t become a flight attendant, she was able to follow her father at Scandinavian Airlines.

It was an interaction with an American passenger during some downtime at a departure gate that led Lindberg to CSUSM. The passenger told Lindberg about the beauty of San Diego, and she went home that night and started looking for colleges in the San Diego area. Before the end of the night, she had applied to CSUSM. She was drawn to the university’s smaller class sizes, which reminded her of classes in Sweden.

Only a couple of months later, Lindberg packed up and moved to San Marcos. 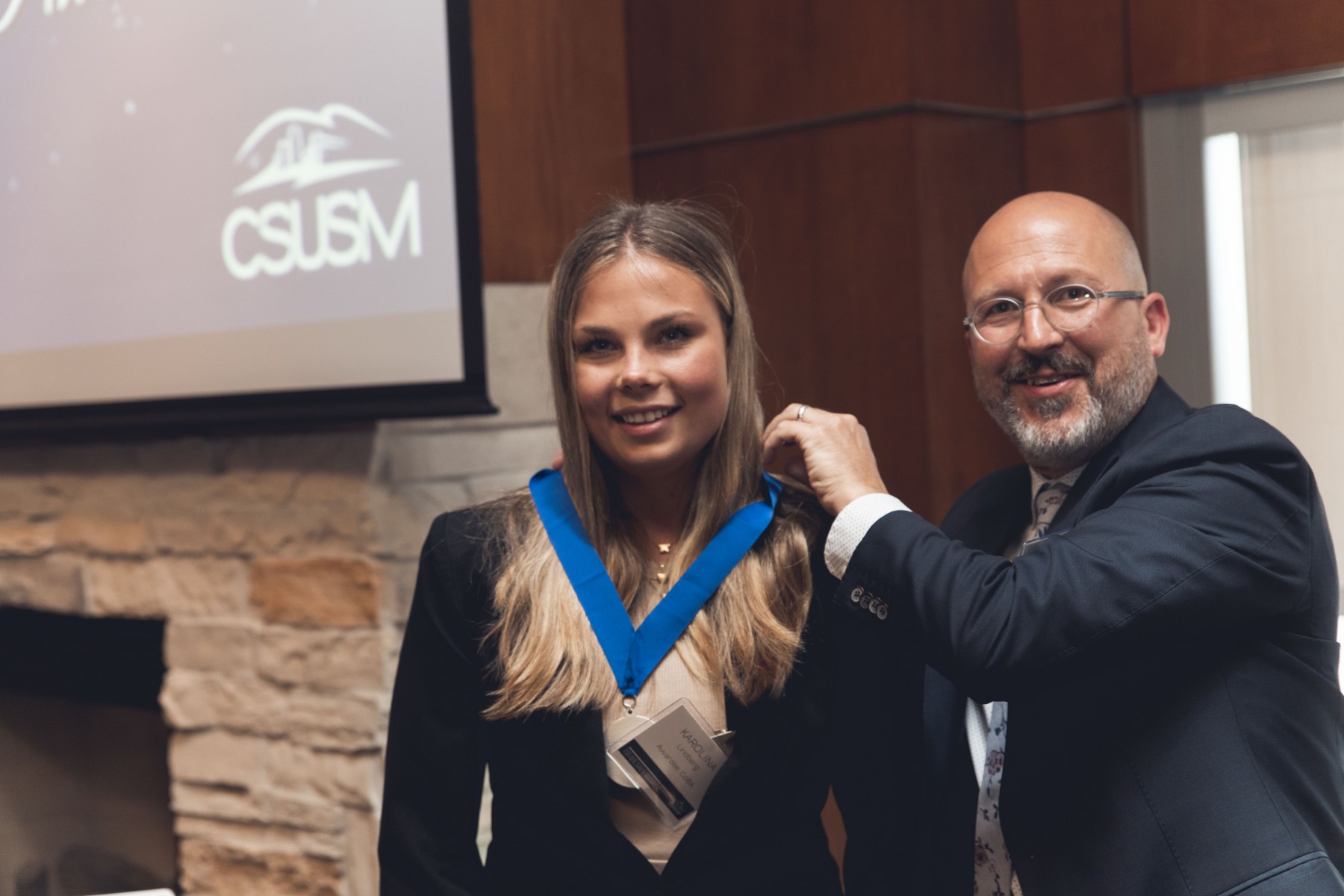 Karolina Lindberg receives her medallion from Provost Carl Kemnitz for being named the dean's outstanding graduate for the College of Business Administration. Photo by Andrew Reed

”I remember my first math class,” Lindberg said. “I've always been good at math. But I was so confused because everything was in English. And I didn't know the terms or what my professor was talking about half of the time.”

Despite those challenges, Lindberg maintained a 4.0 GPA.

But the pandemic brought other challenges.

Lindberg’s epilepsy only affects her when she is extremely stressed. With the constant changes of the pandemic and adjusting to life in a new country, she had a few epileptic attacks while she was away from her family.

“It was hard,” Lindberg said. “In the beginning, I moved alone. My family is nine hours away. They're asleep most of the time when I'm awake. And I had never been alone before. My mom always said it takes a year before you feel at home. So if you dislike it after a year, you can move back, but before that, you should keep trying. And that's what I did.”

Lindberg moved back to Sweden during the pandemic and had several synchronous online classes. The nine-hour time difference meant she had to stay up from 2-7 a.m. to attend classes, while balancing her work as a flight coordinator and taking care of her two horses.

After a year taking classes from her home in Sweden, Lindberg moved back to San Marcos in July to learn more about American culture in her senior year. It was difficult for Lindberg to be away from her horses and animals back in Sweden, so she volunteered at an animal shelter and even ended up adopting a dog named Edwin.

Lindberg’s love for animals sparked her interest in environmentalism. She is planning to pursue a career where she can help develop a more sustainable way of doing business.

Lindberg received an early acceptance to Hult International Business University in San Francisco, where she will continue her education in the fall.

“I would say culturally, being in a diverse setting wasn't much of a challenge, because I've been in settings like that a lot,” Lindberg said. “And I have always believed the nation someone comes from doesn't determine anything about their interest or personality. Obviously, I am Swedish and I'm very similar to my culture, but that doesn't mean that I have more in common with other people from my culture. I've always been very open to differences, which means that cultural differences have never really bothered me.”