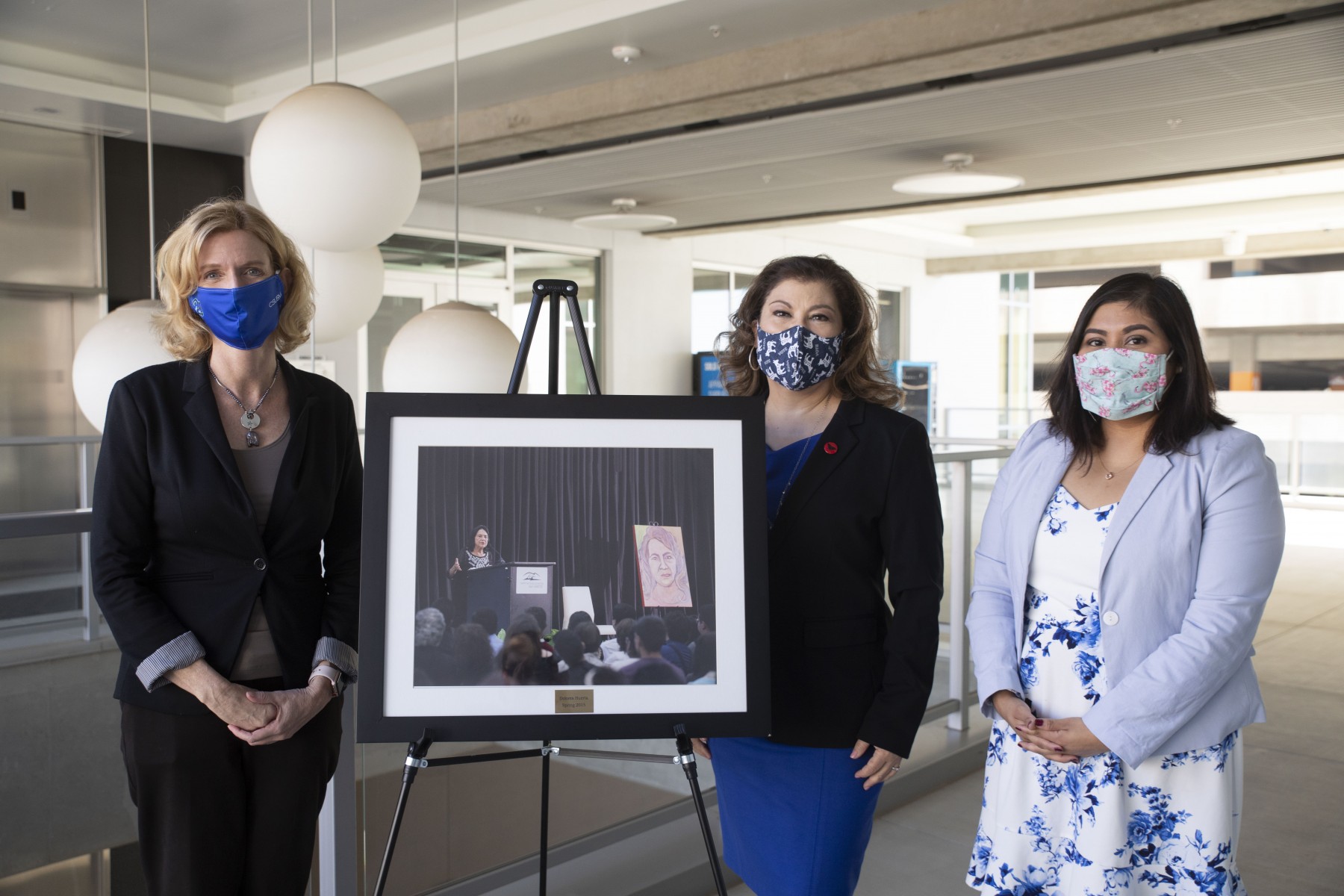 CSUSM President Ellen Neufeldt (left) and Minerva Gonzalez (center) and Maria Venegas Escobedo -- the former and current directors of the College Assistance Migrant Program, respectively -- pose with a photo of civil rights icon Dolores Huerta. The CAMP office at CSUSM will be named for Huerta. Photo by Andrew Reed.

The summer before the start of their freshman year at Cal State San Marcos, while many of their peers are going on vacations or relaxing at the beach, a group of students takes an immersive six-week course that prepares them for the rigors of college.

These recent high school graduates are part of the College Assistance Migrant Program, or CAMP, which aims to help students from migrant and seasonal farmworker backgrounds succeed in a university setting. During this crucial transition period, CAMP staff uses as its motivational mantra “Si se puede,” which translates to “Yes, we can.”

For those students who are even familiar with the phrase, they might assume that it represents the words of César Chávez, seeing as they are emblazoned on the step below the statue of the civil rights icon on CSUSM’s campus. In fact, “Si se puede” was coined by Dolores Huerta, who founded the United Farm Workers union with Chávez in the 1960s and ever since has been a tireless advocate for the rights and dignity of farmworkers.

Now, CSUSM is honoring Huerta in a way that’s commensurate with her legacy. The CAMP office in the Extended Learning building has been named for Huerta, giving the next generation of CAMP students an ever-present reminder of her lasting impact on the program and its mission.

“To be named after Dolores Huerta, who’s a civil rights icon and activist, and who represents the reasons why CAMP exists nationally as well as on our campus, is a great inspiration to our students and our staff,” said Minerva Gonzalez, the CAMP principal investigator who directed the program at CSUSM for 16 years before handing over the reins to Maria Venegas Escobedo in 2018.

The naming of the CAMP office is part of a larger effort across the California State University system. Last April, on the occasion of Huerta’s 90th birthday, the CSU Board of Trustees passed a resolution by which each of the 23 campuses would pay tribute to her in the manner that they saw fit.

Some campuses planted trees. Some installed benches. Some painted murals.

But at CSUSM, the CAMP office was the obvious fit. The recognition will take the physical form of a brushed aluminum plaque calling Huerta a “human rights activist,” featuring a photo of her on one of her many visits to the campus over the years, and proclaiming that “because of Ms. Huerta’s advocacy, numerous California laws have aimed to improve the working conditions of farmworkers, affording rights and protections to immigrants.”

CSUSM also contributed to a memory book that CSU gave to Huerta in connection with the system-wide tribute.

“Dolores Huerta is one of the most impactful icons in American civil rights history,” CSUSM President Ellen Neufeldt said. “Her decades-long work to secure the rights of farmworkers, women and other disadvantaged people is an inspiration to us at CSUSM in our quest to create a more just and equitable world.”

CAMP is a U.S. Department of Education program that has existed nationally since 1972 and arrived at CSUSM in 2002. Over the last 18 years, CAMP has served at least 1,000 students at CSUSM while boasting retention rates of 90% or better every year. The program also engages in extensive outreach efforts to identify potential candidates in high school and works with parents and other family members as well.

“We’re a small program, but we’re very intentional and high-impact,” Gonzalez said. “Our CAMP students have become dentists, scientists, lawyers, teachers, higher education professionals. Many of them serve on this campus. They’re in admissions, they’re in outreach, they’re in financial aid. Everything that we’ve done has been in line with what Dolores believes and what she’s advocated for most of her life.”

Gonzalez was hired in October 2002, one month after CAMP was funded at CSUSM. Setting up the program and keeping students engaged in the first five years was a challenge, as CAMP moved six times due to lack of space. The resilience and hard work of the CAMP staff and students over the years are a big reason why the program is successful today.

When she’s finally able to return to campus after the COVID-19 pandemic, Gonzalez will come back to a bright, roomy space in the Extended Learning building that, because of its new name, holds tremendous personal meaning for her. She first met Huerta in 1970 as a Cal State Northridge freshman majoring in Chicano studies. In the ensuing years, their paths have crossed multiple times – at conferences, on the CSUSM campus – and every interaction has left an indelible mark on Gonzalez.

Just like the indelible mark Huerta has left on CAMP.

“She’s one of my 'sheroes,' ” Gonzalez said. “As an undergraduate at Cal State Northridge in the 70s, I was encouraged by Dolores Huerta, who was emblematic of the civil rights struggles of the day. She inspired me and countless college students to be involved in the farmworker movement. The historical impact of her efforts helped to create CAMP and is ever present in its programming. CAMP students are taught about their cultural legacy and understand the importance of having a voice and creating a CAMP family to support one another.

“Dolores Huerta will always be front and center of what we do.” 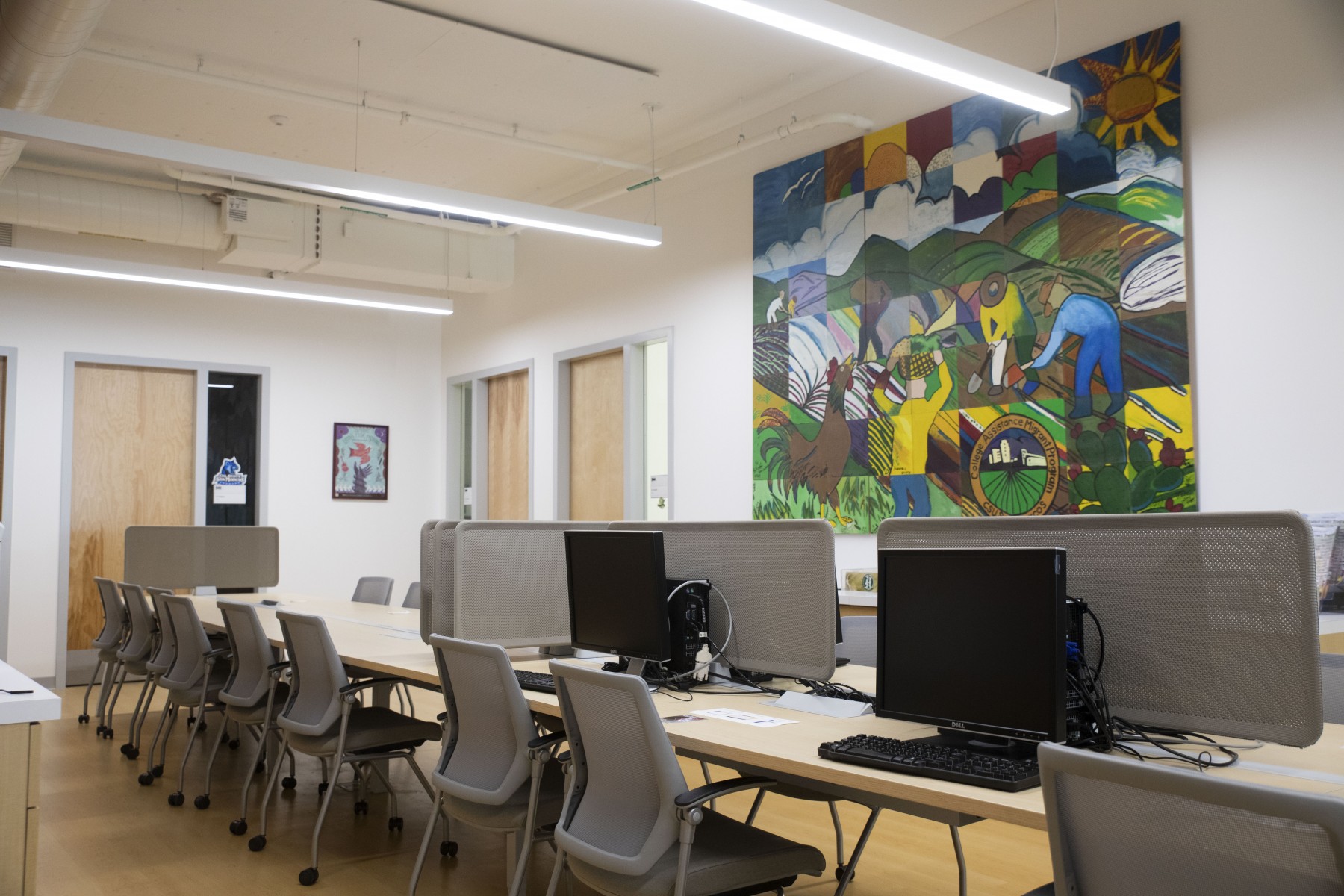 The CAMP office in the Extended Learning building is adorned with a colorful mural that pays tribute to farmworkers in California. Photo by Andrew Reed