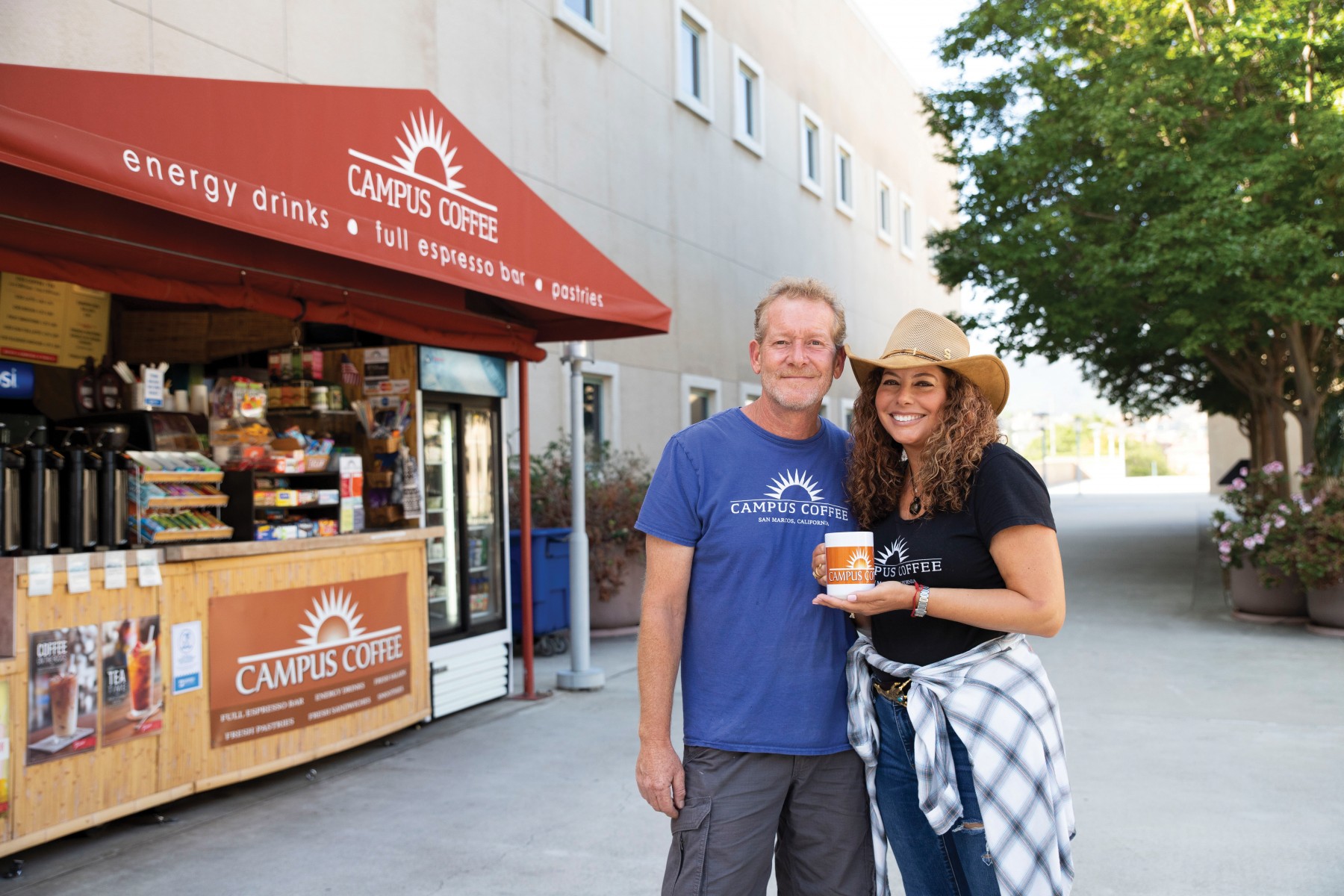 Tim and Sandra Sabbatini are celebrating their 15th anniversary as the owners of Campus Coffee at Cal State San Marcos. Photo by Andrew Reed

When Maya Kummer was a struggling student at Cal State San Marcos, Campus Coffee was a piece of her therapy.

Even on days when depression hit her hardest, she would leave Academic Hall with tears in her eyes, put on sunglasses and walk over to the coffee cart for a pick-me-up – in the form of both a caffeinated drink and pleasant conversation with welcoming faces, owners Tim and Sandra Sabbatini.

“That cup of coffee along with Tim and Sandy’s kindness got me through my hard days,” said Kummer, a 2010 alumna who now works at her alma mater as the coordinator of the TRIO Upward Bound program.

Shannon Nolan-Arañez was a daily Campus Coffee customer when her life was rocked by the sudden death of both her parents. Overnight, she became the head of her household and had to support her siblings financially, making that coffee pit stop every morning feel like a frivolous luxury. After the Sabbatinis learned of her grief, they wrote Nolan-Arañez a sympathy card and occasionally covered the cost of her coffee or treat.

“I love them and cannot thank them enough for being a shining light of love on campus,” said Nolan-Arañez, the coordinator of student involvement for Student Life & Leadership.

On her first day as a CSUSM employee three years ago, Christine Lee was talking about being new with a colleague in line, and a member of the Campus Coffee crew overheard her conversation. When she picked up her latte, she discovered cinnamon in the shape of a Cougar paw floating on the surface.

“It’s one of the lasting memories I have from my first day of work,” said Lee, the outreach and communication liaison for Community Engagement.

It was August 2004, only five days before the start of the school year, when Tim and Sandra Sabbatini opened Campus Coffee as the university’s only stand-alone business, a fresh new iteration of the coffee stand that had carved out a rather modest existence in the spot just outside Science Hall I. Fifteen years later, the married couple from Michigan has established a legacy that goes far beyond brewing the best chai latte in North County, a subject about which you will encounter little debate around CSUSM.

Campus Coffee has become the beating heart of mornings (and early afternoons, for true java junkies) at the university. It’s a place where if they don’t know your name, they know your usual order, and more often than not they know both. It’s a place where your coffee comes with a generous side order of friendly banter (bonus points if you like hockey) and classic rock ‘n’ roll. It’s a place that offers the ultimate mom-and-pop contrast to the pumpkin-latte-peddling corporate behemoth that resides just down the stairs – and that, as a result, engenders tremendous loyalty from its longtime devotees.

“It’s a family-owned, family-operated, family-driven business,” said Todd Snedden, associate director of athletics. “And I think what comes across to the customer, to the campus community, is that we value you, you’re part of our family, come and see us again. It’s just personal. There’s a personal relationship there.”

The Sabbatinis came to CSUSM with the intention of weaving themselves and their coffee cart into the fabric of the campus, and they have done precisely that. Almost from the moment they set up shop, they became a sponsor of Cougars athletics, and today they are the longest continuous financial supporter of the department. It’s no coincidence that many athletes, coaches and athletic staff employees (like Snedden) frequently make the long trek up from the Clarke Field House or The Sports Center, bypassing two other coffee shops on the way. 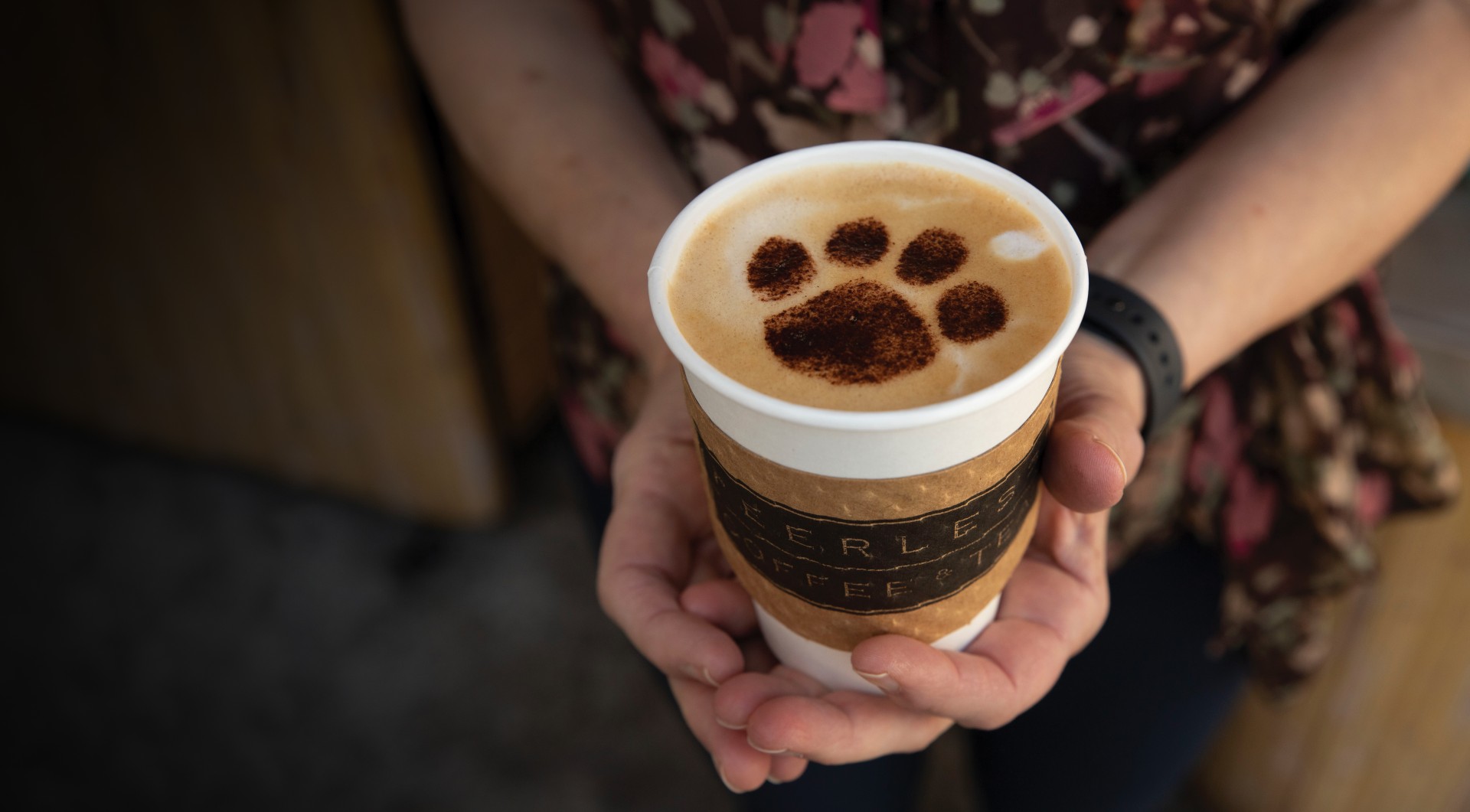 From Cougar paws in the coffee to custom sleeves at certain times of year, Campus Coffee has developed a reputation for going the extra mile and making its customers feel special. Photo by Andrew Reed

Campus Coffee has thrown itself wholeheartedly into CSUSM’s sustainability efforts. It encourages customers to bring their own mugs (regardless of the size, you just get charged for a small), it sells silverware, and it no longer offers plastic bags or straws. Last summer, Campus Coffee became the first eatery in San Marcos to pledge to be an Ocean Friendly Restaurant, a Surfrider Foundation program through which restaurants can show their commitment to making sustainable choices for the ocean.

Campus Coffee also supports many other organizations and causes on and off campus, including CSUSM’s Clear the Air program marking the university as a smoke- and tobacco-free campus by distributing custom coffee sleeves every semester.

“We all help each other, support each other,” Sandra Sabbatini said. “That’s what this school is all about.”

Tim and Sandra both grew up in St. Clair Shores, Mich., a small town north of Detroit that borders Lake St. Clair. They met in a dance club when they were 16 and got married a few years later. They fell in love with California during a trip west for spring break in high school and moved here in their mid-20s, driving their “big old Cadillac” across the country.

They settled in Lake San Marcos, where they still live, and in 1992, Tim indulged his passions for coffee and business by opening a store in Carlsbad that he named It’s Coffee Time, located in the shopping center just west of Interstate 5 and south of Poinsettia Lane. For 12 years, it served as the neighborhood haunt of the surf-and-sea crowd.

“Everybody loved their shop,” said Eliza Bigham, a retired CSUSM human development professor who still lives in the area and used to frequent the café in the early 2000s. “It’s a beach community, and there’s a lot of people who do a lot of bike riding, dog walking. It’s nice to have a destination to go to where there’s a smiling face, a cup of coffee and a bowl for your dog.”

In 2004, It’s Coffee Time was the victim of an expansion by the Ralphs in the same strip mall, and the supermarket bought out Tim’s lease. In a quirk of fate, that was right when the person who owned the existing CSUSM coffee cart was seeking to sell. The Sabbatinis long had wanted to work on a college campus – Tim recalls taking a computer class at CSUSM with a friend “when the internet came out” – and they leaped at the opportunity.

“It was perfect timing,” Tim said. “We grabbed it up real quick.”

Sandra joined her husband in the venture after working for a dentist while Tim ran the store in Carlsbad. They scrambled to give the run-down coffee cart a makeover, buying new ice machines, coolers, an espresso maker, a credit card reader, a menu board.

One thing Tim took pains to keep from his prior shop was his roaster. Peerless Coffee is a nearly century-old family business from Oakland that has won numerous awards for the quality of its products.

“When we place our coffee order, we’ll place it in the morning, and it gets roasted that day and delivered the next day,” Sandra said. “That’s how fresh it is.”

Regulars seem to notice the difference.

“The coffee is way better than Starbucks,” said Lisa Carmosino, who works in the School of Health Sciences & Human Services. 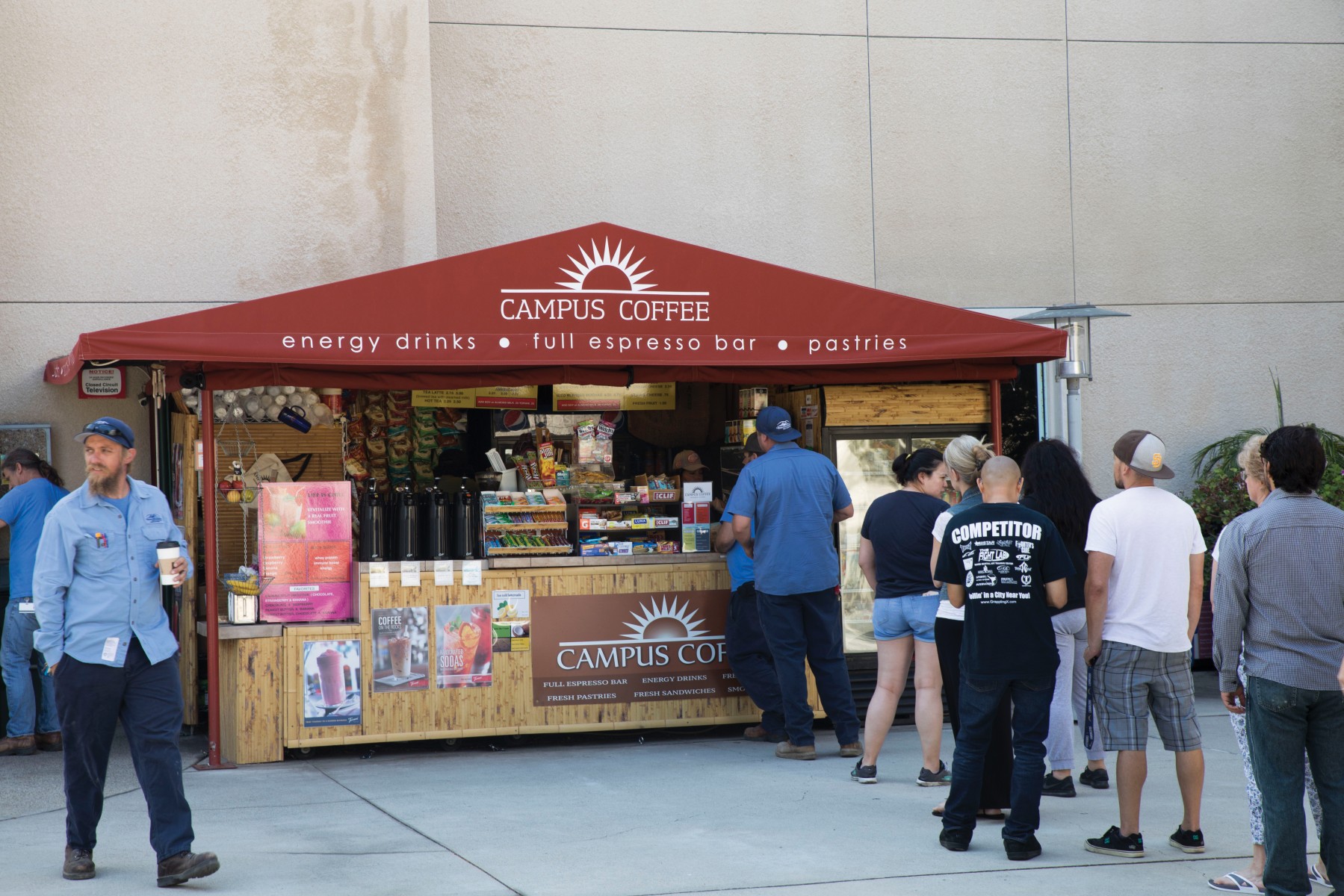 Speaking of the “S” word, the Sabbatinis feel no rivalry with the Seattle java giant, which opened its franchise on campus just months before Campus Coffee in 2004.

“It never really bothered us, the Starbucks thing,” Tim said. “We have our little niche, and they have theirs. There’s room for everyone.”

If you’re wondering who the third member of the Campus Coffee team is, no, it’s not the Sabbatinis’ son (though, yes, they get that question a lot). Kyle Duran started off as an ardent, if not obsessive, fan of the cart when he was a student, constantly hanging out on a nearby bench and doing shots of espresso with his buddies. He became an employee during his final semester at CSUSM in 2010, never imagining that he would stick around after he graduated with a marketing degree.

But he has, and hasn’t regretted it for a second.

“I just love the environment here,” Duran said. “Tim and Sandy are the most amazing people in the world. They treat me like a son. And it’s so nice to work outside.”

Tim and Duran first bonded over their shared love of hockey, and they still “talk puck,” as Sandra puts it, constantly between themselves and with sports-inclined customers (“They could talk about hockey 24/7,” Sandra said with mild exasperation). The looseness of the vibe at Campus Coffee, even when the line is long and the Sabbatinis are swamped, is what many people find so appealing.

And they know what you’re thinking: How can someone work so long in such tight quarters with their spouse?

When they’re not under the burnt orange awning, Tim and Sandra like to cook, play with their dog, Rico, and travel. Each August, they shut down their business for a month to visit their families in Michigan.

Asked what the next 15 years may hold for Campus Coffee, Tim said: “Listen to what the customers want and just keep going. Hopefully, be busier and busier. This is what I like to do, and we’re happy to be here.”

Not as happy as CSUSM is to have them here.