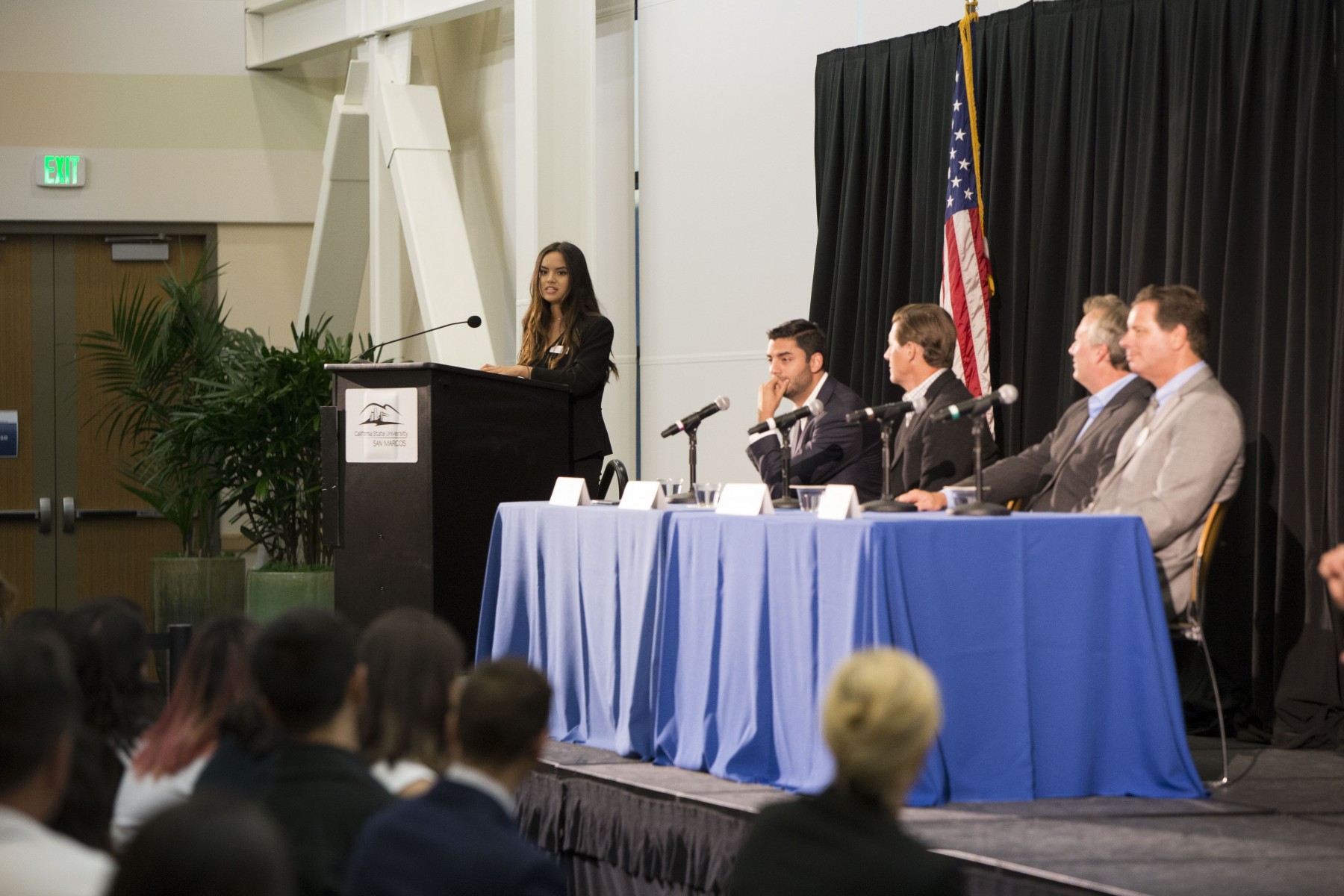 Candidate forum
Michelle Tran, the ASI vice president of student and university affairs, speaks to the audience during a CSUSM candidate forum on Oct. 9. Photo by Andrew Reed

To help students become more engaged in the political process, Cal State San Marcos decided to bring the politicians to them.

Almost a year ago, with the midterm elections on the horizon, the CSUSM Office of Government Relations approached Associated Students, Inc. with a proposal to organize and host a forum featuring candidates for elected office in the federal and state districts in which the University is located.

“We knew there would be a shared goal of getting students to engage with candidates and discuss issues important to them,” said Christine Antoine, CSUSM’s Director of Government Relations. “An election year was a perfect time to bring this to fruition.”

After each of the four candidates gave opening remarks to the audience, the moderator, Jade Hindmon of KPBS, asked a series of prewritten questions that they had to answer within an allotted time. The questions pertained to topics ranging from higher education funding and student success to housing affordability and the biggest challenge facing the region. Students and other audience members also were allowed to submit questions, some of which were asked near the end of the forum.

“I think it went really well,” said Michelle Tran, the ASI vice president of student and university affairs, who helped organize the forum and addressed the crowd beforehand. “It’s hard to get people out on a Tuesday night, but it’s nice to see that people are civically engaged. I’m glad that the candidates came out and had their chance to speak directly to the students.” 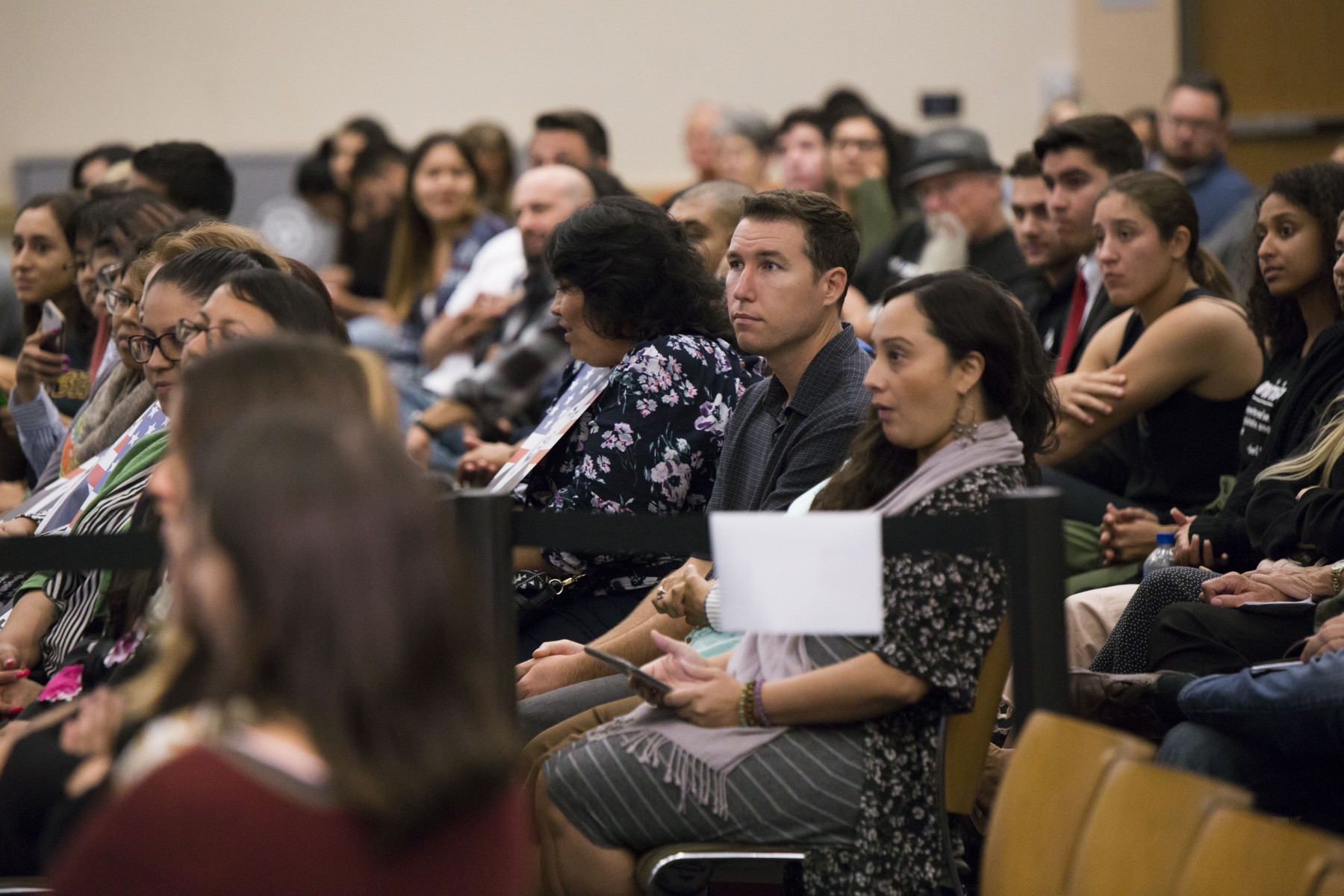 Candidate forum
Students and other audience members listen to the candidates during the forum. Photo by Andrew Reed

Michelle said she was proud of the fact that the first three questions asked at the forum – all about education-related issues – were crafted by ASI’s student advocacy committee, and the answers given by the candidates could help CSUSM students decide who to vote for next month.

Many of them will be voting for the first time in their lives.

“This forum really pushed me to vote, especially since they brought in local people who will be representing my needs and the community’s needs,” said Kristin Gazallo, a senior who’s majoring in global studies. “It was a great experience to find out more about the candidates. Social media and news stories only scratch the surface, but hearing them speak about issues they are truly passionate about makes a difference when deciding who to vote for.”

Senior Brandon Patterson said he appreciated that the format was a forum rather than a debate, which he said tends to be less about policy than it is a “battle in rhetoric.”

“I appreciated the civil, substance-oriented atmosphere,” said Brandon, a political science major. “I fear we do not experience that enough. It was constructive and allowed voters to catch a glimpse of these candidates in a somewhat conversational setting, and this is of great value.

“I hope to see such events continue on our campus, as I feel they fulfill an important purpose in civic engagement.”

Michelle hopes that the burgeoning engagement in federal, state and local issues will start to extend to campus government as well. In the last ASI election, she recalls, she ran unopposed and only about 600 out of 17,000 students voted.

“As soon as they get exposed to ASI,” she said, “it’s easier for them to understand the legitimacy and gravity of the impact that they have in their state and federal elections as well.”