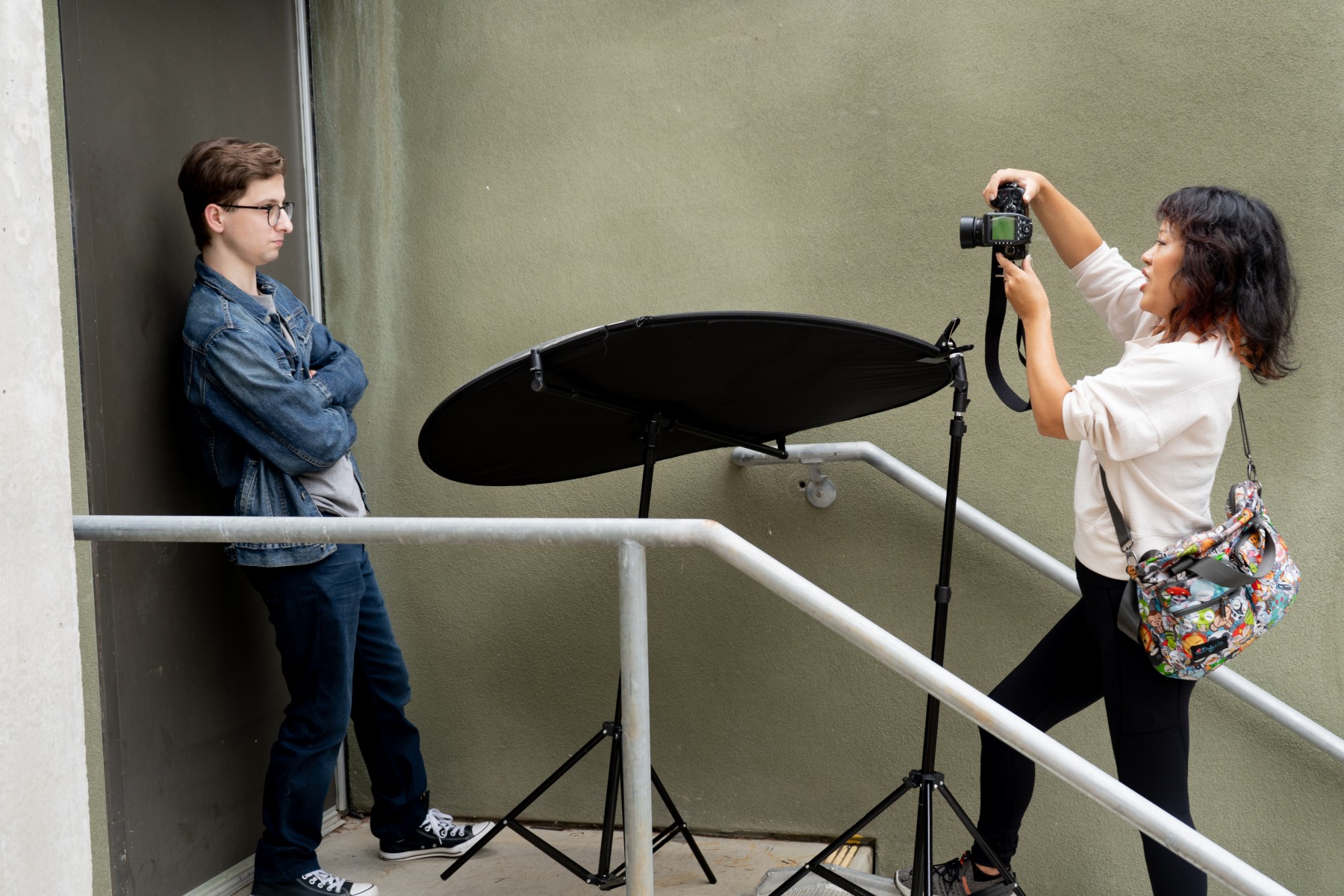 A CSUSM theater student has his headshot taken by photographer Diana Toshiko as part of the Career Skills in Theatre class. Photo by Alison Hoffman

Like most of the theater students at Cal State San Marcos, Elizabeth Barron entered the university wanting to be an actor.

Truth be told, like most of her fellow theater students, Barron didn’t know much about what other jobs could even be pursued in the field.

That all changed when the transfer student was a senior last academic year and enrolled in a course titled TA 403: Career Skills in Theatre. Each week, a different professional from the world of theater, film or television would join the class for a virtual lecture about their craft. One week it would be a costume designer. Then a casting agent. Then an artistic director.

When the weekly guest was a producer, Barron sat up and took notice. 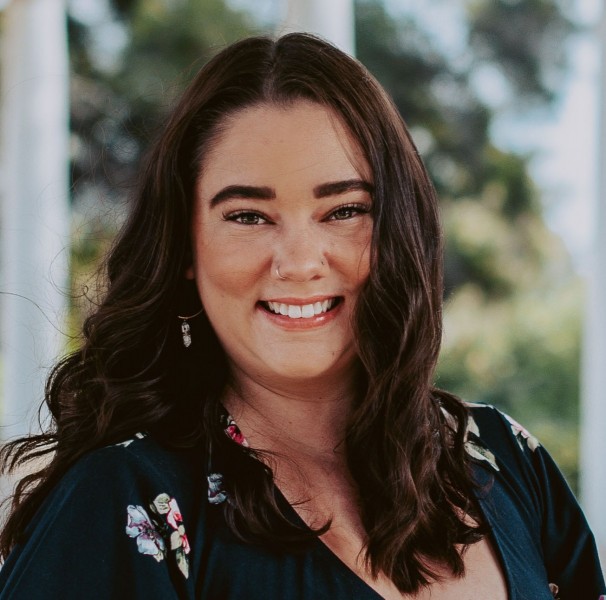 “When you’re growing up and you hear that someone is a theater artist, you think actor or director,” Barron said. “You assume there’s not a lot of in between, even though there’s so much in between. Don’t get me wrong, I love acting, but it was definitely not something I wanted to do for a career.

“Then in the career skills class, I started listening to all the different contracting artists and the array of things that people can do. I thought that the producer was the person with the money, but I learned that they’re the boss of the creative design process and hiring people and taking a project from idea to finality. And I loved that idea.”

The idea of helping theater students discover career paths that perhaps they didn’t know existed was just what Judy Bauerlein had in mind when she and a couple of theater faculty colleagues dreamed up the concept for the class two years ago.

“As part of our major, we wanted to make sure that our students were not only training in craft, but starting to gain knowledge in all fields of theater, film and television,” said Bauerlein, who’s chair of the department. “Very few programs have a professional development component. Knowing that our students are often first generation or financially negatively impacted, we designed this class as a way for them to get those skills on our campus.”

Career Skills in Theatre is made up of two main elements. The first is the weekly guest lectures by professionals from different areas of the industry, such as the producer who inspired Barron. Because the course was first offered during the pandemic, those discussions took place virtually via Zoom, allowing guests from beyond just the local region to participate and impart their expertise. It worked out so well that the same format is in place this semester.

And, perhaps most importantly, they are given an opportunity to get their own headshots, the ultimate calling card for any aspiring theater professional. Bauerlein invited Diana Toshiko, a well-established photographer from Los Angeles, to come to campus, and for a weekend in mid-October, she performed a series of 30-minute headshot sessions with students from the career skills class. Toshiko lowered her usual cost of $250 to $100 so everyone in the class could take part without being overly burdened, and even the $100 fee was offset by a student success grant from the College of Humanities, Arts, Behavioral and Social Sciences.

“If you want to audition for La Jolla Playhouse or The Old Globe or Cygnet Theatre, they're going to say, ‘OK, please submit a headshot and résumé.’ That's the first step,” Bauerlein said. “So we want to make sure that if our students are right for something happening at those theaters, they don't have to do a selfie. They have a professional headshot. This class is really about student preparedness.”

The course this semester is being taught by lecturer Shaun Heard, a CSUSM alumnus who’s living his dream of trying to become a working actor in L.A. Heard is the ideal choice to mentor the students, Bauerlein says, because he’s regularly going to auditions and bringing that knowledge back into the classroom.

It's just the kind of industry knowledge that Bauerlein knows she would have benefited from when she was a young actor. As a student at Temple University in her native Philadelphia, she attended a regional theater audition that essentially served as a tryout for spots in the Master of Fine Arts programs at various institutions. Bauerlein recalls doing well and receiving more than a dozen callbacks. But she felt grossly unprepared for the ensuing interviews because no one had taught her how to do them.

After discovering the job of producer in the career skills class, Barron wasted little time pursuing it. She graduated last May, then moved to Hollywood, where she’s in the first semester of a three-year MFA program at California Institute of the Arts.

Most of Barron’s coursework consists of producing theater projects in L.A., and she aspires to run her own production studio for both theater and film.

“As a working artist who’s going to be largely an independent contractor, you need to know the details of the industry and you need to know your options,” Barron said. “I think that a lot of theater departments don’t give many options to students, besides being a director, an actor or a costumer. You might know that there are other things out there, but you don't know how to get into these fields.

“The career skills class taught me that, and I’m not sure I’d be where I am without it.”

The next production of the CSUSM theater department is “The Revolutionists,” a comedic play by Lauren Gunderson. Performances will be Nov. 16-18 at 7:30 and Nov. 19 at 2 p.m., all in Arts 111. Learn more and buy tickets here.