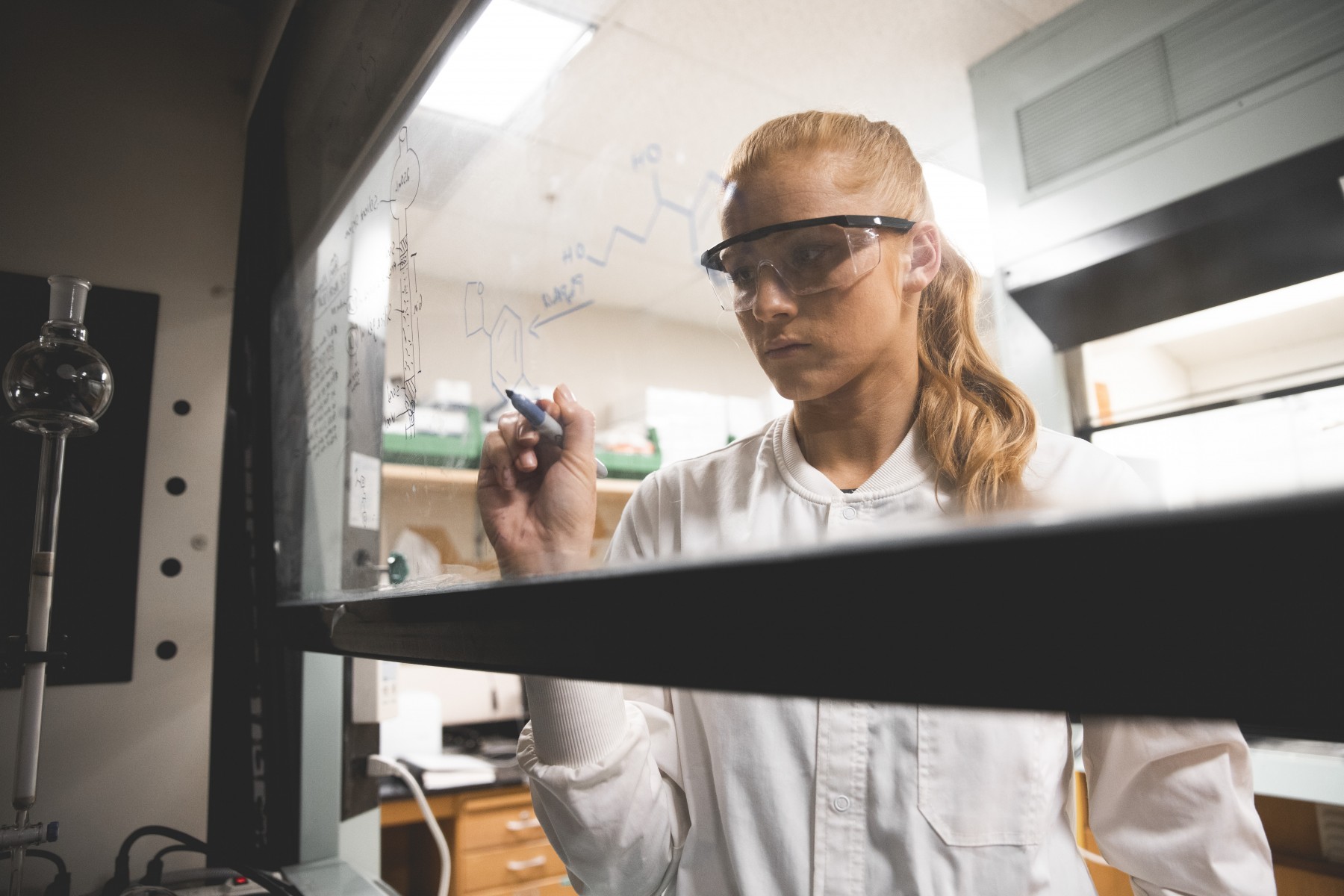 Chemistry student Madison Wagner has been selected as the dean's outstanding graduate for the College of Science, Technology, Engineering, and Mathematics. Photo by Andrew Reed

Madison Wagner has always had a natural curiosity about the world. She affectionately refers to her rural upbringing in the agricultural community of nearby Valley Center as “growing up in the dirt.” It was where she explored ponds and streams when she wasn’t helping her parents manage a menagerie of animals, including chickens, horses and steers.

That curiosity never dissipated, even when Wagner was laboring to get through high school. And, despite those difficulties, Wagner found her passion during her junior year at Valley Center High School.

“I was in a really bad place and just struggling with a lot,” Wagner said. “Then chemistry and science kind of came out of the woodwork. It was something that I was really good at and something that I loved to do.”

Wagner became the first person in her family to earn a high school diploma when she graduated from Valley Center High School. College was never a goal so much as an option that seemed as good as any other. So, it was only natural that, when she enrolled at Palomar College after high school, she would pursue her love of chemistry.

But when Wagner met with an academic adviser, she received an unexpected recommendation. The adviser told Wagner about the long odds she faced, how it would be difficult to complete a chemistry degree, how a first-generation college student would be better served in a field outside of STEM.

Wagner reluctantly heeded the advice and declared performing arts as her major – for one semester.

Wagner did that and more. She earned associate degrees in both arts and science at Palomar before transferring to Cal State San Marcos to fully devote herself to chemistry. Not only is she earning her bachelor’s in chemistry next month, she will be recognized at the College of Science, Technology, Engineering, and Mathematics commencement ceremony on May 20 as the dean’s outstanding graduate, an annual award that recognizes academic excellence, research and service to the college.

“Every challenge I threw in front of her, she just destroyed it,” chemistry professor Robert Iafe said. 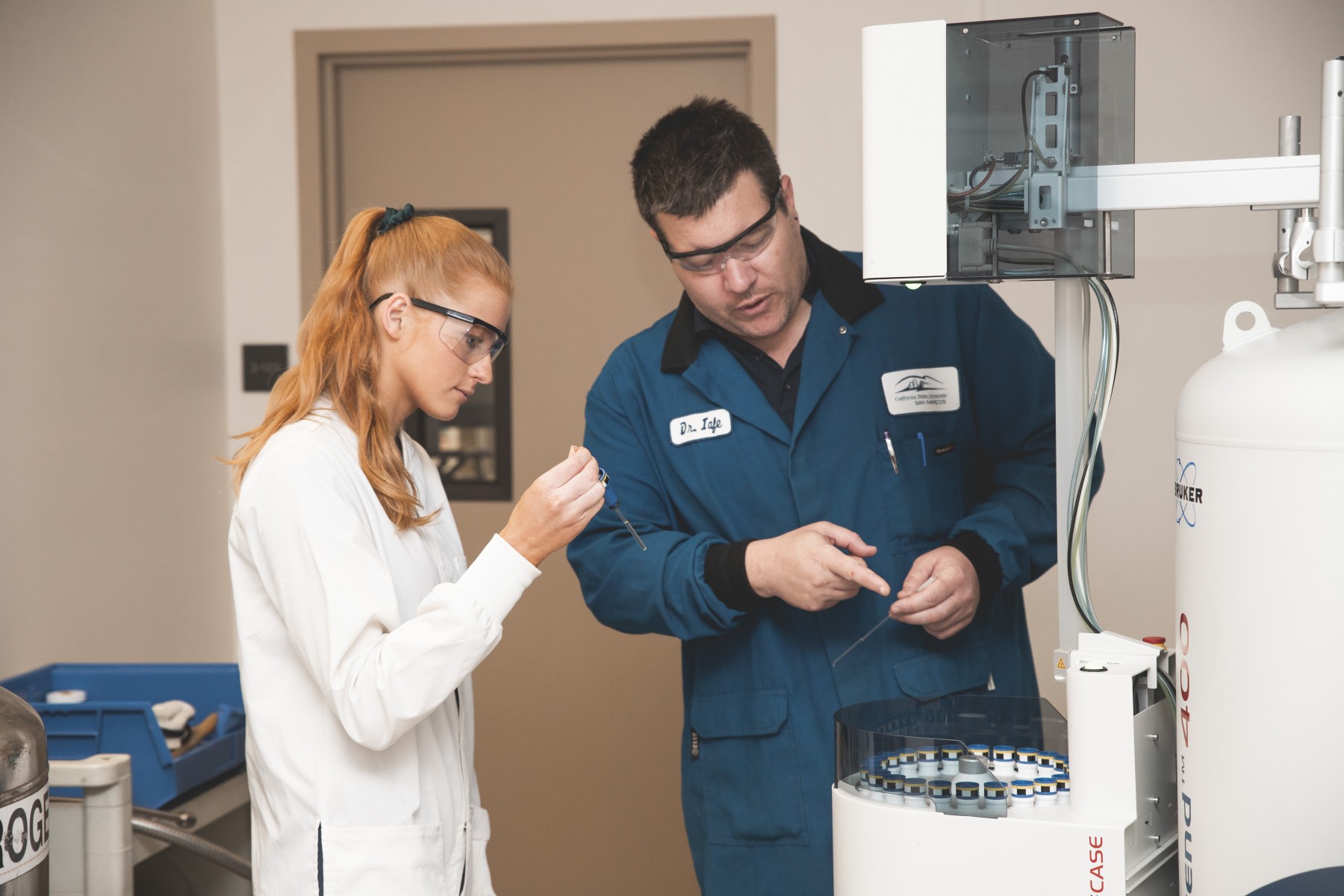 Wagner thrived in Iafe’s organic chemistry class. She consistently scored in the top 1% on exams and was a regular at office hours and problem-solving sessions outside of lectures.

Wagner’s work in the classroom led Iafe to invite her to conduct organic methodology research in his lab, and she earned a 2021-22 CSUSM Beckman Scholars research award, which provides 15 months of mentored research experience.

“Dr. Iafe has been instrumental in my success here,” Wagner said. “I cannot thank him enough for the opportunities he’s given me. He's worked so hard to give me time in the lab, and he's supported me every step of the way. I'm really thankful for his mentorship and guidance.”

When Iafe asked Wagner about her post-graduation plans, she told him about her goal to make life-changing medicine.

Wagner’s older brother, Pierson, battled clinical depression and schizophrenia, and he died by suicide at 16. Wagner was just 4 years old at the time and didn’t learn until high school about how Pierson died. Now, she wants to help people with similar mental health struggles, and she realized at Palomar that it’s something she can do through chemistry.

Wagner didn’t know much about graduate programs when she arrived at CSUSM, but Iafe helped her understand how important it would be in achieving her goals. She was accepted to multiple top-notch graduate programs, including UC Irvine and USC, before choosing to pursue her Ph.D. at Scripps Research this fall.

While Wagner paid for her undergraduate education through a combination of a Beckman Scholars stipend and scholarships earned through her participation in rodeo pageants (her many awards include winning Miss Rodeo California in 2019), she won’t have to worry about that at Scripps. The school covers tuition costs, and Wagner will be paid a stipend for living expenses, which means she can focus completely on her work.

“Madison went above and beyond, I think, of any undergraduate that I've seen in the past,” Iafe said. “She actively sought out collaborations, interactions and introductions with principal investigators at graduate schools.” 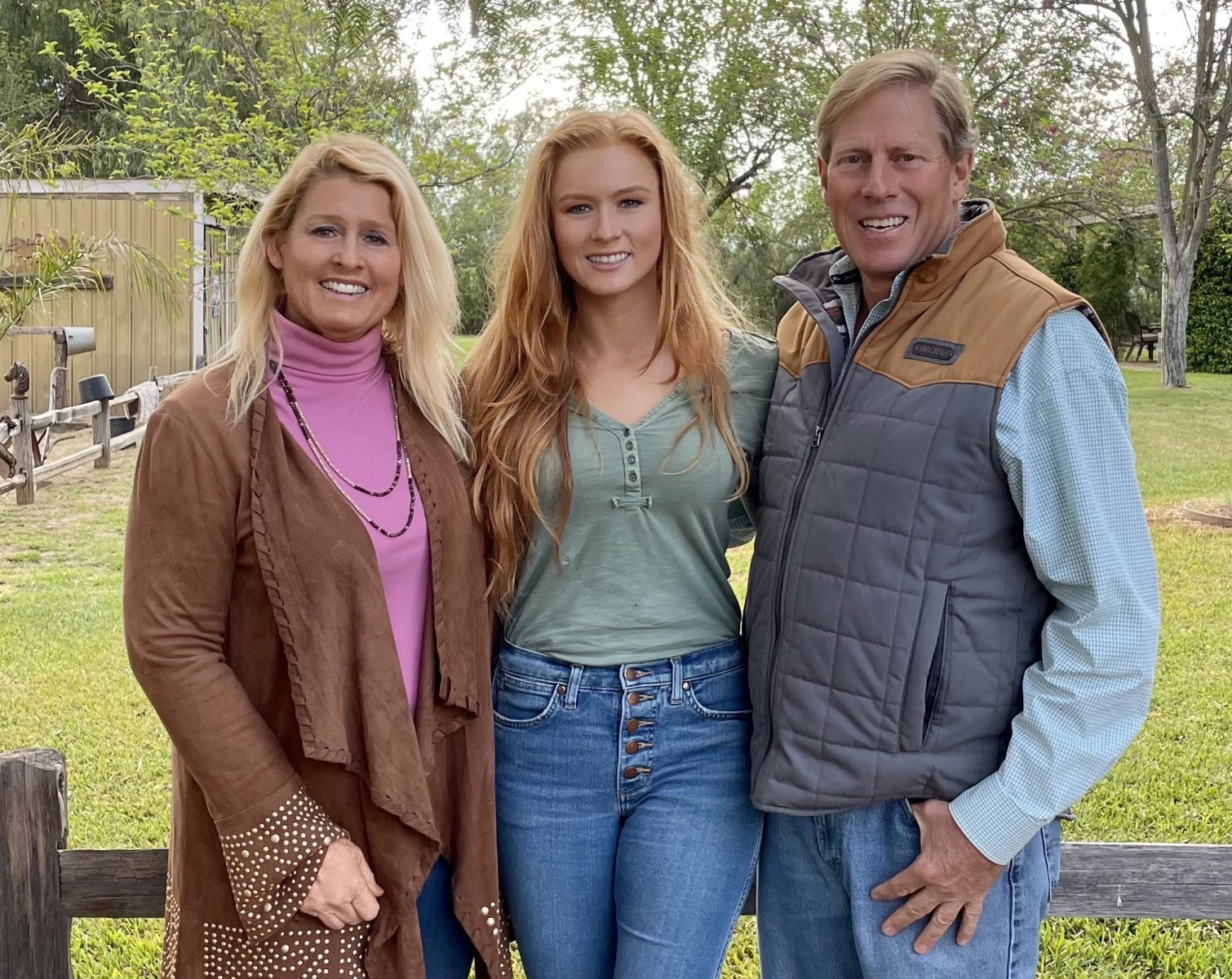 Madison Wagner (center) credits her parents, Madelyn and Billy, for instilling in her the work ethic that has her on the verge of becoming the first in her family to earn a college degree.

Wagner credits her parents, Billy and Madelyn, for instilling that work ethic. They set an example both through the successful commercial electrical company they established in Valley Center and through the daily work needed to care for dozens of animals on their property.

“My mom always says, ‘You go to college one way or another,’ ” Wagner said. “You either go to a higher education institution or you work really hard somewhere and kind of work your way up the ranks. They've worked so hard their whole lives to get there, and I think a lot of that drive and commitment passed on to me.”

Wagner’s mom was with her that day five years ago when she met with the adviser who recommended that she avoid STEM majors. Wagner never saw that adviser again after that meeting. She found another counselor who provided the type of guidance she needed.

While some people might be tempted to track down that first adviser to share how wrong they were, Wagner holds no animosity for the advice she received that day.

“I recognize the place she came from,” Wagner said. “I know the statistical odds of ending up where I did is really low, and I recognize that she saw that. My only advice to people would be that you know what's in you and you know what you're capable of. The person who you're meeting might have only met you for 10 minutes out of your whole life, so you have to take everything that you hear from people with a grain of salt. Because you might be capable of a lot more than you thought.”