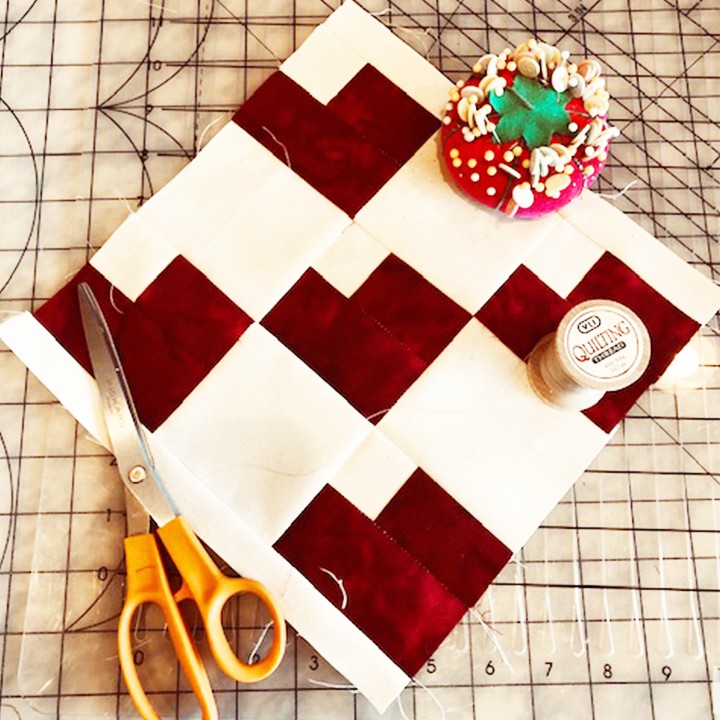 The CSUSM COVID-19 compassion quilting project will create a campus quilt to commemorate the community’s collective experience around the pandemic. This square pattern, created by Sharon Hamill, will be used to commemorate loved ones who died; all other squares will be the creation of participants.

Twenty-five years ago, Cal State San Marcos was a four-building campus full of bright-eyed optimists with individual paths but the common goal of making it a home of inclusion, a place for caring, a community of learning and inspiration.

Sharon Hamill had just arrived on campus as a young assistant professor. She was also pregnant with her third child, facing the challenge of establishing herself in a brand new educational setting while not knowing anybody. She was also recently diagnosed with melanoma, the most serious type of skin cancer. Her hills to climb were many.

But she was thrown a lifeline. It may be more accurate to say a quilt figuratively covered her with a sense of community.

“I don’t think I ever shared with anybody who I was quilting with what was going on with me, but that connection to people and sense of normality made all the difference,” said Hamill of the lunchtime quilting in the University Commons building. “I think of it as hearts connecting. I think of what Pat and Leslie did in a very simple gesture to invite others in. I still have such tremendously positive feelings about that.”

Pat and Leslie are Pat Worden and Leslie Zomalt, legendary CSUSM faculty who had large impacts across the university. Some of the quilts the duo facilitated the creation of have been hung in various spots around campus like the library.

Fast forward to a new century, a campus that looks nothing like it did in 1996 and the challenge of creating caring programs when the community perhaps has never needed it more.

Introducing the CSUSM COVID-19 compassion quilting project, which will soon begin creating a campus quilt to commemorate the community’s collective experience around the pandemic.

For Hamill, giving back has no expiration date.

“President (Ellen) Neufeldt has set the stage for a culture of care, and COVID has provided the opportunity to really show where the rubber meets the road; are you able to live what you espouse?” said Hamill, who in addition to her roles as psychology/child and adolescent development professor and chair of the Academic Senate, is the founding faculty director for the CSU Shiley Institute for Palliative Care at CSUSM.

“Across all universities it is a real struggle with students’ mental health and physical health. Staff, faculty, administrators – everyone is feeling it. One of the things that make a big difference is just opportunities to show our common humanity. And when you see suffering – and that is what our campus is doing right now is suffering – there’s a beautiful opportunity for people to reach out to one another and lend a hand, lend a heart and help people to feel like they’re not alone.”

The CSU Shiley Institute for Palliative Care at CSUSM office is partnering with Hamill. Michael McDuffie, the faculty director for the IPC at CSUSM, has worked closely with Hamill on the details. Jillian Dunn, a graphics and public relations specialist, has created a video to show how to make your own 10” quilt panel.

When campus reopens, the plan is to gather people in the CSUSM community who like to sew, have an artistic bent or simply want to help. Those who don’t know how to sew can be taught. Once the piecing happens (when the top of the quilt is put together), the stitching will proceed perhaps in front of the University Student Union with tables and volunteers in an open setting that hopefully encourages shared experiences and feelings.

“It’s a way to allow people to give a name to the losses they’ve had or to those individuals and things they’re grateful for and to share it with other people,” said Hamill, who was one of nine children in her family and has three sons of her own. “Where it has an impact is not just on the community but on the individuals themselves. There’s a lot of research out there on using expressive arts as a way to deal with your own grief, your own stress.” 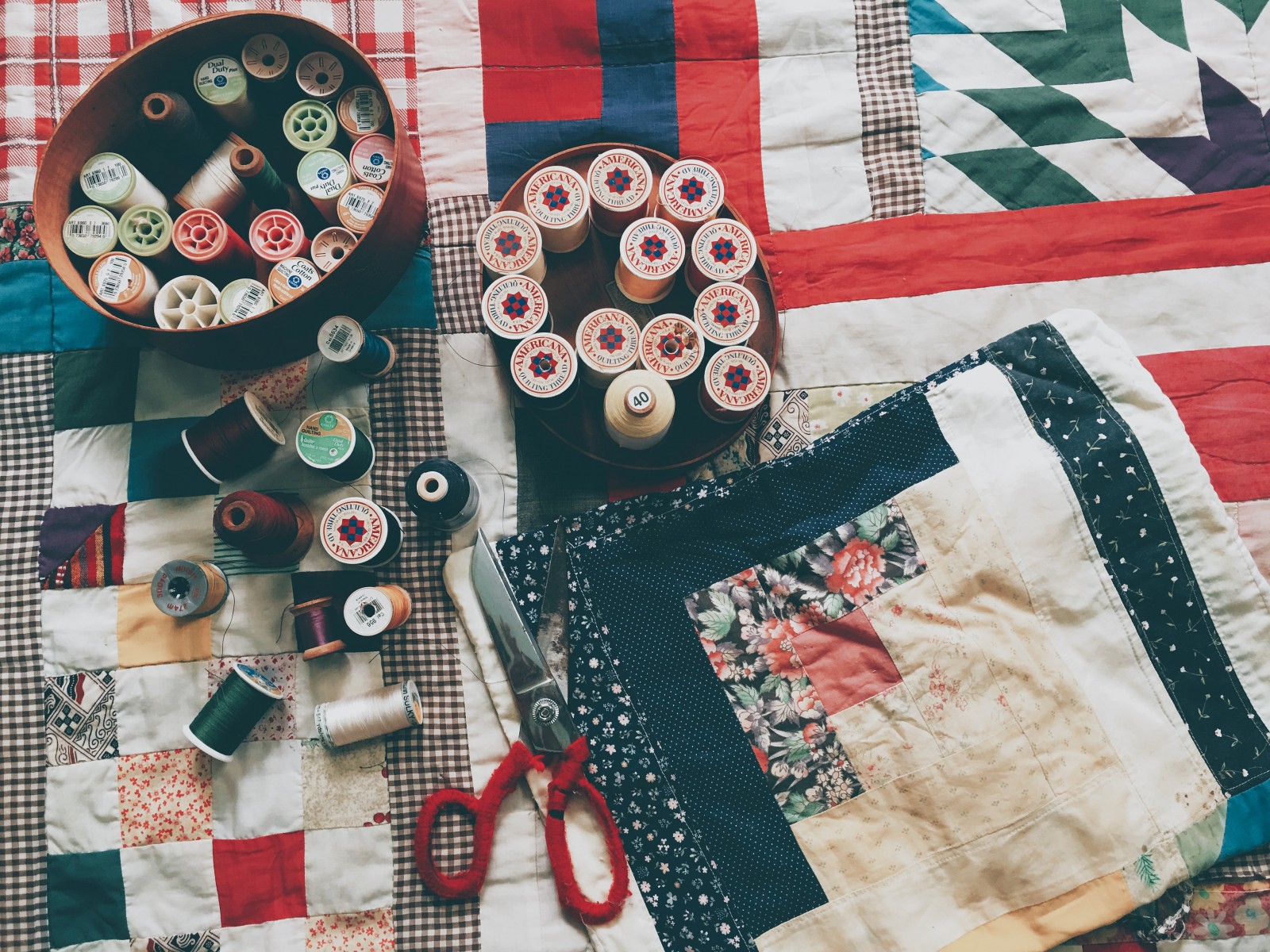 The CSUSM COVID-19 compassion quilting project will create a campus quilt to commemorate the community’s collective experience around the pandemic.

Depending on how many squares they get, the plan is to have an exhibit on campus in the spring of 2022. Most likely there will be multiple quilts rather than one massive quilt because after the exhibit it will be important to share it.

Individual quilts could be put in places like the library, and the IPC at CSUSM senate offices as a reminder that this is now part of the campus history.

Much of Hamill’s career research has focused on family caregiving. In fact, her and graduate student Sean Griser are currently conducting a survey on caregivers of family members with Alzheimer’s disease during COVID-19. She is starting to see an increase in the number of college students doubling as caregivers for family members.

The hope is that the study will further understanding of how COVID-19 is impacting caregiving and what caregivers need for support.

Hamill teaches a class on risk and resiliency. While students, faculty and staff all deal with life’s challenges on a daily basis, doing it when you’re isolated and feeling like you’re the only one not handling it well can be overwhelming.

Positive effects need to come out of the experience.

“A big part of resiliency is learning how to cope with the stresses that you have in very healthy ways,” she said. “That includes expressive art, mindfulness, communicating with other people and common projects. Those are ways for us to build community. It will have the benefit of improving our own mental and physical health if we do that.”

While on sabbatical in 2017, Hamill took a quilting class at Grand Country Quilters on Grand Avenue in San Marcos. Virginia Palomari was the expert quilter who taught her, and neither Palomari nor anyone else she watched or quilted side-by-side with had any affiliation with CSUSM. But Hamill couldn’t help but think of her quilting experience at CSUSM’s Dome two decades previous when the campus was a fraction of what it is now in population, architecture and influence.

It was another one of those serendipitous moments that showed her that life is more than just a series of random events, but rather a tapestry of experiences that are defined by how people treat each other. How our hearts are shaped. How much love we put out in the world.

“The sense of community around creating something and connecting with other people was so powerful,” Hamill said. “We really need to build opportunities to connect with others over things we love. When things get rough, people do rise up and they reach out and they look for opportunities to connect with other people. We have our issues. But what I see is a real drive in people to make changes to create a better campus and a better world.

“As hard as it is (with COVID), we still every day see people coming up with yet another way for the campus community to connect. That’s what gives me the hope that when we finally are able to return to campus it won’t be coming back to exactly the way it was initially, but the heart will be there.”