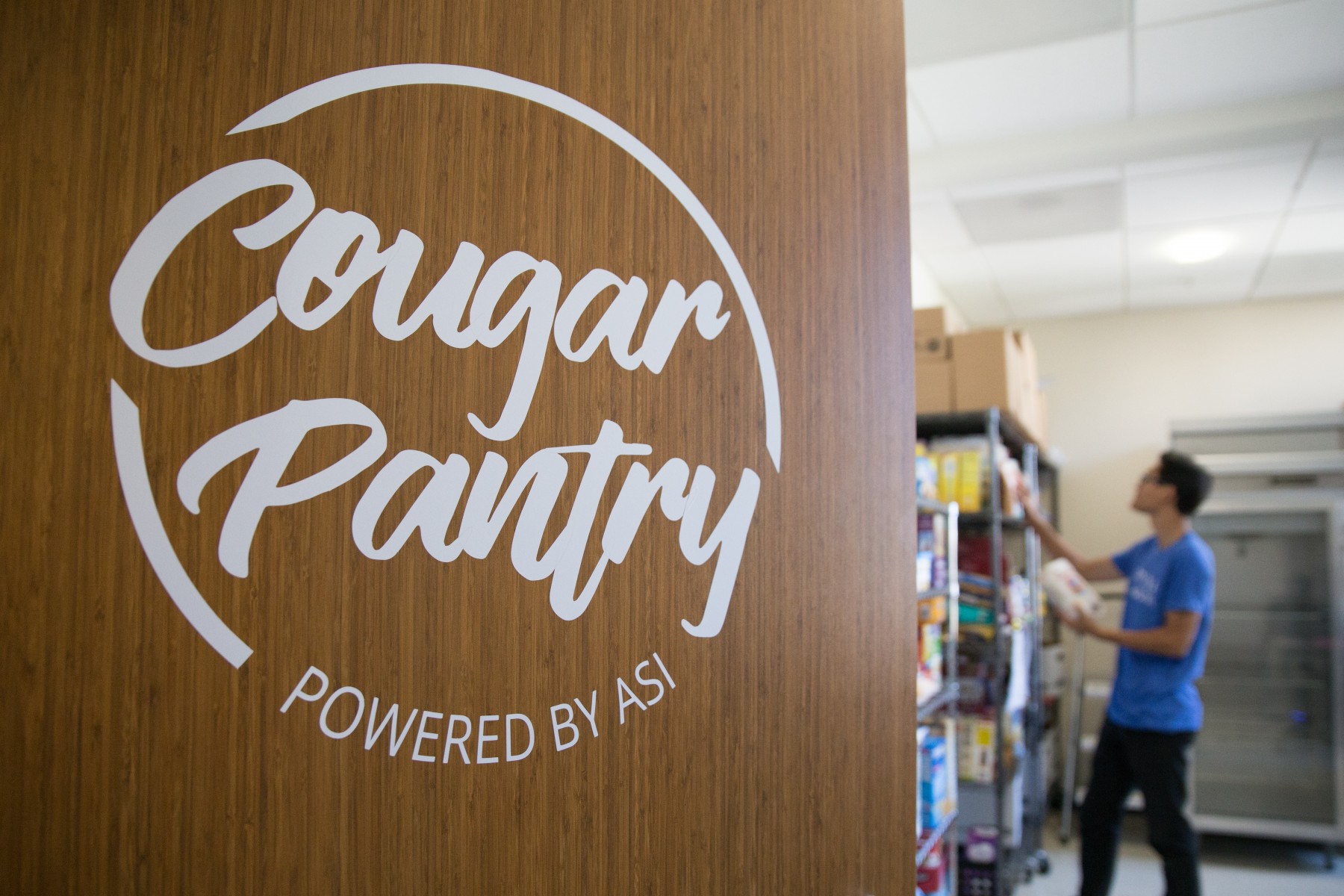 Talk about a much-needed public awareness campaign. Even though a significant number of Cal State San Marcos students are dealing with issues of food insecurity, a recent survey showed barely half of CSUSM students had heard about the new Cougar Pantry and its stockpile of free food for the hungry, and less than a quarter of students knew where the pantry is located.

Enter a team of business majors engaging in a Senior Experience project that tackled a goal to raise awareness of the recently established campus resource.

“It was inspiring to watch a group of students who perhaps didn’t have a connection with the pantry but quickly became passionate about the project and what they were doing,” said Annie Macias, Executive Director, Associated Students, Inc., which operates the Cougar Pantry. “They were very involved and they did a great job of getting engaged. We are very pleased with their effort and they came up with some very good ideas.”

The Cougar Pantry, located in the University Student Union next to the LGBTQA Pride Center, opened last spring and before long was serving up to 150 students each week. But that is a fraction of the number of students who deal with food insecurity on campus; a CSUSM survey conducted in 2016 found more than 50 percent of students are not sure when or where they would be able to get their next meal or are skipping meals because they cannot afford to purchase food. The Cougar Pantry purchases non-perishable goods – such as pasta, canned sauce, cereal, oatmeal, rice and beans – from the North County Food Bank. In addition, fresh produce from Feeding San Diego is distributed on Mondays at Kellogg Plaza.

The Senior Experience team – comprising students Renzo Elias, Vivian Garcia, Angela Huang, Nuri Melo, and Rosa Soto – began their work by measuring awareness. What they found was not encouraging: barely half of CSUSM students had heard about the Cougar Pantry and not even a quarter of students knew where the pantry was located. What’s more, 24 percent of faculty and staff said they had not heard of the pantry, and more than 60 percent said they were unaware of its location.

The team’s marketing campaign was rooted in research involving food banks and meetings with Associated Students, and it began with flyers posted around campus that included basic information about the pantry and Monday food distributions at Kellogg Plaza. The team also distributed flyers with granola bars to students around campus, a strategy that allowed for a more personal touch and improved engagement with the campus community.

To address the large number of faculty and staff members who were unaware of how to connect students to the pantry, the team created a flyer with steps that could be taken to help those who are going hungry. To further the messaging, the team contacted the four colleges to present a five-minute informational session at faculty meetings, and it arranged to advertise the Cougar Pantry by broadcasting messages on digital screens throughout the university, beginning with Markstein Hall. Finally, the team is recommending that the Cougar Pantry upload videos about the pantry onto its social media sites.

The effort is already having an impact. Associated Students reported an increase in awareness about the pantry as the spring semester wound down, and it is hoping to capitalize on that momentum heading into the fall semester.

Among those who learned about the Cougar Pantry through the Senior Experience team’s effort was Serra Lanzezio, who was working full time until an internship during her senior year resulted in her cutting back on her hours. That meant less money for food and increased anxiety. “The Pantry came at a good time when I was working less hours,” said Lanzezio, who had budgeted just $150 monthly for groceries. “Because of the Pantry, I save $50 every month on food and groceries.”

For more information about the Cougar Pantry and to make an appointment to pick up needed food, visit https://www.csusm.edu/asi/pantry.

“It was a rewarding project for us to work on and we hope it helps make a difference,” said Melo. “It really made us more aware about some of the resources that are available on campus and helped illustrate for us that the faculty and staff are here to help.”