California State University San Marcos (CSUSM) announced it will award an honorary Doctor of Fine Arts degree to North County resident and cartoonist Greg Evans during a spring commencement ceremony on Saturday, May 21 at 1 p.m.

Each year, the CSUSM Honorary Degree Committee, an advisory committee appointed by the president to represent the university community, considers nominations for an honorary degree. Any CSUSM students, faculty, staff, alumni and the greater community may suggest potential honorary degree recipients to the committee.

Nominees for honorary degrees must be distinguished in their respective fields, and the eminence of persons nominated must be widely recognized. Nominees must have demonstrated intellectual and humane values that are consistent with the aims of higher education; with the highest ideals of the person´s chosen fields, and with the goals and aspirations of California State University San Marcos as specifically set forth in its mission statement.

The CSU Board of Trustees makes the final determination and awards the degrees in the categories it considers most appropriate. 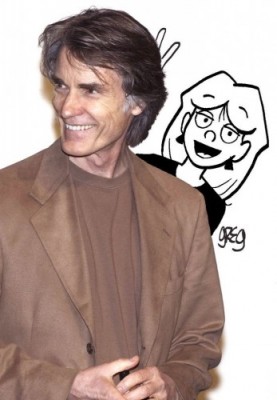 Greg Evans, a nationally syndicated and award-winning cartoonist and creator of the strip, Luann, is a strong advocate of arts education and a loyal supporter of California State University San Marcos.

Growing up in Burbank, Calif., Evans dreamed of becoming an animator, but it was years before he reached his goal. A graduate of California State University Northridge, Evans taught high school art in El Centro, California. In 1972, he and his wife, Betty, moved to Australia, where they lived and taught for two years. After a year of traveling, they settled in Colorado, where Evans worked as a graphic artist and promotion manager for a television station. During that time, he freelanced as a magazine cartoonist while developing ideas for a comic strip. From these ideas, Luann emerged.

Since it began in 1985, Luann has earned a loyal following in more than 350 newspapers and has consistently ranked among the top five comic strips in reader surveys. In 2003, Evans received the National Cartoonists Society Reuben Award for Outstanding Cartoonist of the Year, the highest award in cartooning.

Evan’s advocacy of and for adolescent girls and young women has been an ongoing theme of his work, and teenagers everywhere relate to his insightful humor and true-to-life characters. He has broached real issues that teens face from puberty, peer pressure, academic achievement, character building challenges, unrequited love, drugs and alcohol, all with kindness and a sense of humanity.

Evan’s is also a long-time advisory board member of Center ARTES at CSUSM, a center that aims to advance arts education in K-12 schools. Through an on-going partnership with the CSUSM School of Arts, Evans has developed new work, including the musical “Luann: Scenes in a Teen’s Life,” which has been performed on numerous stages throughout the country.