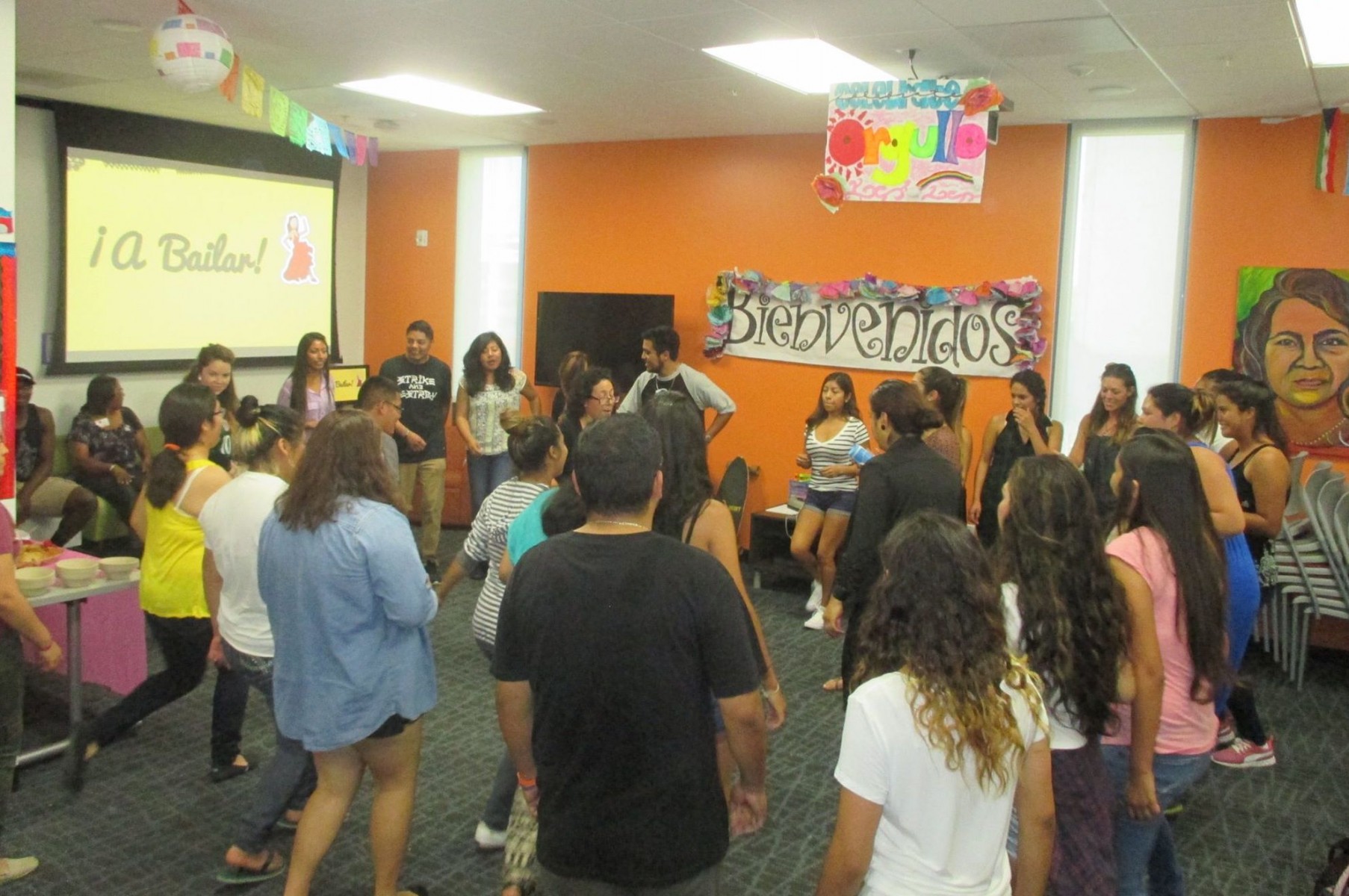 Just one year after its opening, the Latin@ Center at Cal State San Marcos has already left its mark, impacting hundreds of lives on campus.

Dedicated Sept. 17, 2015, the Latin@ Center was envisioned as a resource-rich enclave in the University Student Union to foster academic achievement, promote greater awareness of Latino/Latina issues, promote workshops and discussions, and offer the services of peer coaches to provide guidance.

“Opening the doors to a space that gives dignity and cultural validation to our Latin@/Latinx scholars has exceeded the expectations of the original vision for the center,” said Latin@ Center Director Maria Mendoza-Bautista. “I have been given a precious gift in this lifetime to work with an extraordinary group of students and who have given valuable feedback to make the Latin@ Center their home away from home, a space that is inclusive and promotes cross-cultural collaboration. Every corner of the center permeates the spirit of our community and the roots of Latin@ culture; from indigenous roots to contemporary influences and heroes/sheroes of our time. This space represents the daily struggle of our community in America, to never take for granted what our immigrant parents came to this country to do, to work hard and give their children a better life.”

For Mendoza-Bautista, the 1,200-square-foot Latin@ Center with computers, printers, and free green books and scantrons is a far cry from what she found when she arrived as an undergraduate student at San Jose State University after transferring from Long Beach City College. Support services for Latinos and Latinas were hardly bountiful in those days.

“We had a small area tucked away on the last floor of the university library, basically two shelves, dedicated to Chicano/Latino literature,” she said.

Today, Latinos are enrolling in colleges and universities in record numbers, making support services such as the Latin@ Center as vital as ever. At CSUSM, which has been designated as a Hispanic Serving Institution, Latinos constitute 40 percent of the student population.

However, according to The State of Higher Education in California – Latino Report published in the spring of 2015, too many Latinos at campuses across the country lack access to the resources that can help them succeed. The result: in the CSU system, the four-year graduation rate divide between white and Latino students has almost doubled from an 8.5-point gap for the freshman cohort enrolling in 1998 to a 15.4-point gap for the cohort enrolling in 2007, the report found.

Deyanira “Deya” Hernandez, who was the first peer coach hired at the center, is among the program’s biggest fans.

“Cal State San Marcos has done a wonderful job in terms of diversity,” she said. “You see people with backgrounds from everywhere. This is a campus that definitely gives an opportunity for minorities to get a quality education.”

Brenda Diaz, a senior majoring in kinesiology who has worked as a peer coach since the Latin@ Center opened, said she is getting as much out of the facility as anyone she is helping. Her job has provided her with the valuable “soft skills” such as leadership and ability to work with others that employers often complain are lacking in today’s college graduates.

“It’s had a huge impact on me,” she said. “It’s provided me with a place to focus on school, a safe haven, a place for familia. College can be a struggle sometimes, and having a center that can inspire you is invaluable.”

Comments from 530 students surveyed who were asked how the Latin@ Center impacted them this first year include: “The Center has helped me be more positive about the my semester and the environment within the center has helped me believe I can do it when I feel like giving up;” “Has given me the necessary resources to succeed in my classes;” “It has helped me with finding a safe spot to do work and feel comfortable;” and “It provided me a place where I felt at home & could relax while still being able to complete my work.”

Most popular resources used were the study area, printing services, lounge area, and scantrons and green books. What’s more, nearly 60 percent of students who responded said they stayed on campus longer because of their visits to the Latin@ Center.

The Latin@ Center is not restricted to Hispanic students. Everybody is welcome. On average, up to 120 students visit per day and up to 2,100 people visit monthly when K-12 students and those from community groups are included.

“We get a wide variety of people from different cultures who drop in,” said Javier Jara, a junior studying history who has been working as a peer coach at the center since it opened. “A lot of people come in with their friends, feel at home and keep coming back. It’s a place where people can have a home away from home.”