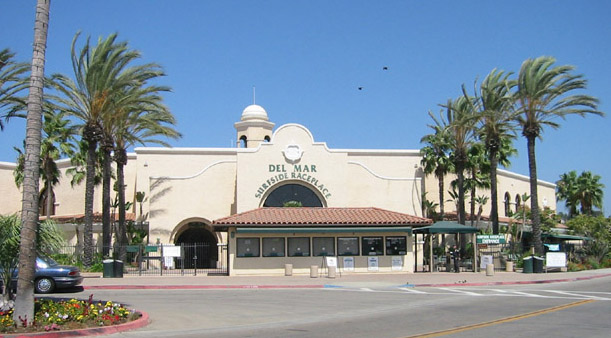 Surfside Race Place
A comprehensive analysis authored by a team of Cal State San Marcos business students is propelling a proposal to transform a struggling, off-track betting facility at the Del Mar Fairgrounds into the region’s newest concert venue.

A comprehensive analysis authored by a team of Cal State San Marcos business students is propelling a proposal to transform a struggling, off-track betting facility at the Del Mar Fairgrounds into the region’s newest concert venue.

“The work they did was excellent,” said Tim Fennell, CEO of the 22nd District Agricultural Association, which operates the Del Mar Fairgrounds. “Our goal is to have the concert venue open before the 2018 fair season.”

After reviewing the analysis and agreeing with its findings, the Agricultural Association’s Board of Directors on Jan. 3 gave its staff the go-ahead to spend up to $250,000 to investigate potential funding sources for the estimated $11 million renovation of the Surfside Race Place and hire an engineering firm to develop more detailed plans.

The Surfside Race Place is a 91,000-square-foot building constructed in 1991 at a cost of $12 million. Initially a success, the facility attracted an average of 3,000 people daily after it was built, and as many as 6,000 bettors for the Kentucky Derby. But an aging clientele combined with an array of alternative options has contributed to attendance plummeting to less than 300 bettors on an average day, Fennell said.

That prompted the 22nd Agricultural District to look at other opportunities, including restaurants, movie theaters, and even a microbrewery.

“The idea of a concert venue was also kicked around,” Fennell said. “We wanted to make sure we were going in the right direction, so we reached out to our friends in the Business program at Cal State San Marcos. We’re very pleased with the work they did.” 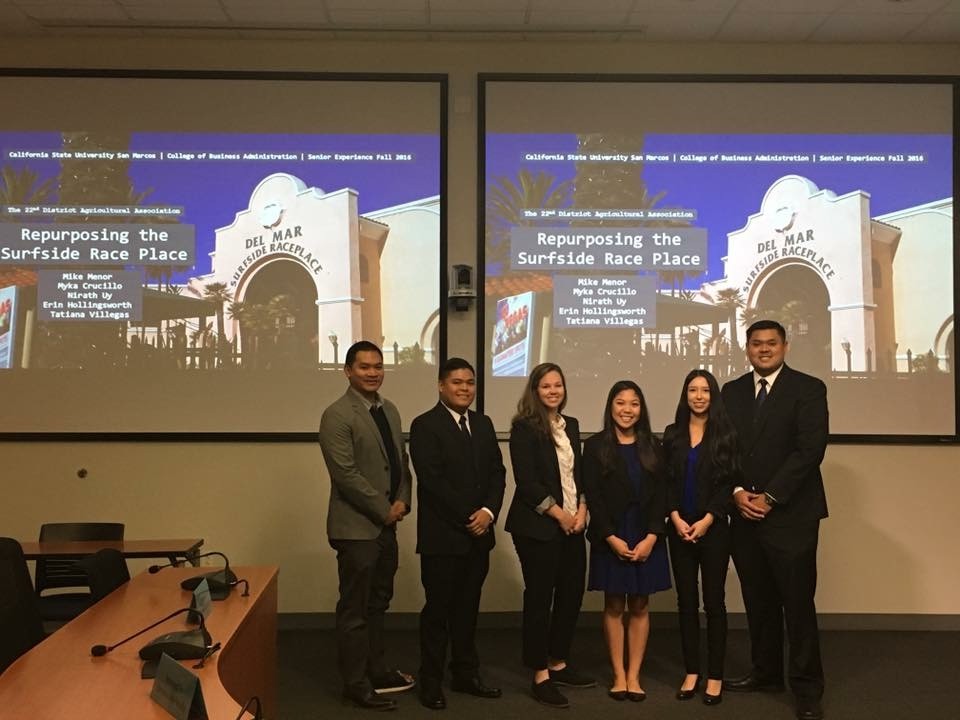 Two groups of business students worked on the months-long study under the supervision of Dr. Don Sciglimpaglia, a marketing lecturer in the CSUSM College of Business Administration. One group comprised five students wrapping up their MBA program; the other group comprised five undergraduates (and one MBA advisory student) tackling a Senior Experience project, a successful College of Business Administration program matching teams of students with projects submitted by local businesses and organizations.

Titled the Del Mar Surfside Race Place Concert Venue Marketing Analysis, the report cites a 2015 Ticketmaster study estimating the average driving distance one travels to a concert at 43 miles, and concludes there are 3.7 million people living within that distance of the fairgrounds. More importantly, 42 percent of the population within that area is from 25 to 54 years old, which is the most common age group for people attending concerts. Residents, the analysis found, spend an average of $3,400 on entertainment per year and shell out just short of $67 per ticket to attend the theater, opera, or concert performance.

The report recommends that the Belly Up Tavern, which has suggested a new concert venue at the fairgrounds, would become a partner in managing the site.

The report’s conclusion: Surfside Race Place could be repurposed into a 1,900-seat concert venue. With tickets selling for an average of $45 per ticket, and with 90 concerts booked annually, the analysis estimates a net cash flow of nearly $2.4 million each year. That compares to revenue of less than $129,000 generated by the Surfside Race Place in 2014, about 22 percent of what it was in 2010.

Students based the $45 average ticket price by researching admission costs at four San Diego venues: The House of Blues, the Balboa Theatre, Humphreys Concerts by the Bay, and the Observatory North Park. They shared their findings with the board of directors at the 22nd District Agricultural Association monthly meeting in December. Less than a month later, the fair board approved the initial funding.

“For an agency to commit a $250,000 expenditure in moving forward on a project proposed by a team of students that includes undergraduates is very unusual,” Sciglimpaglia said.

Students who worked on the project included Mike Menor, who led the Senior Experience team, and Debbie Jo McCool, who led the MBA team.

“We’re overjoyed with the impact our work has had,” McCool said. “Our team has already committed to buying tickets to the first concert once the new venue opens. We’re pretty ecstatic right now.”

Said Menor: “It was a very challenging, but very rewarding project. We felt good about the work we did, but we weren’t sure about the reception we were going to get from the fair board. But they were really impressed.”

Those on the fair board weren’t the only ones who were impressed.

“This was a team of bright people who asked relevant questions, engaged in extensive research, and listened to what people were saying,” said Chris Goldsmith, president of Belly Up Entertainment.

“I was very impressed by their work,” Sciglimpaglia said. “The quality was very comparable to what you would find from a professional consultant.” 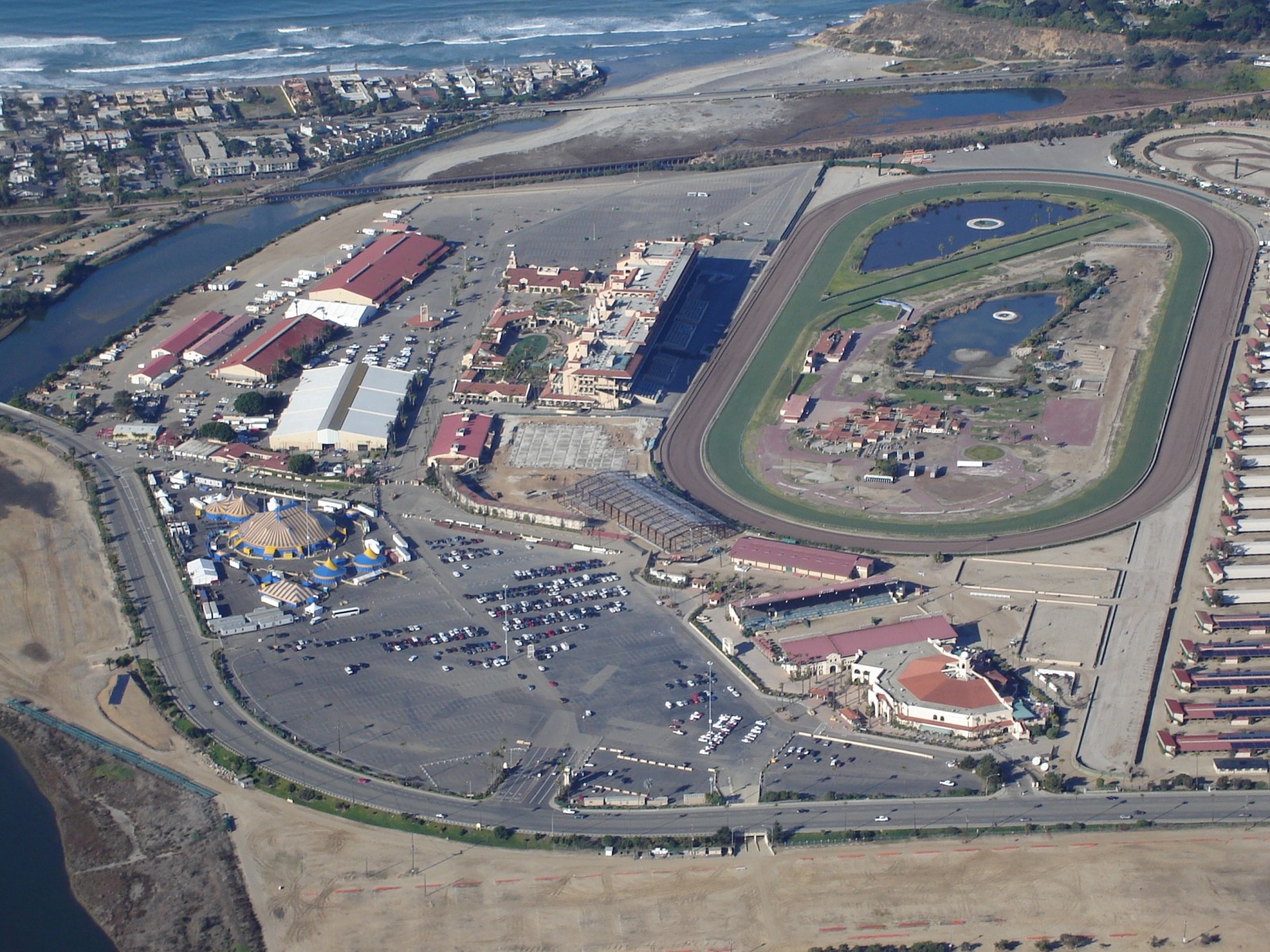 Del Mar Fairgrounds
A comprehensive analysis authored by a team of Cal State San Marcos business students is propelling a proposal to transform a struggling, off-track betting facility at the Del Mar Fairgrounds into the region’s newest concert venue.
NewsCenter