Snow wonder: CSUSM student a whiz in classroom and on board 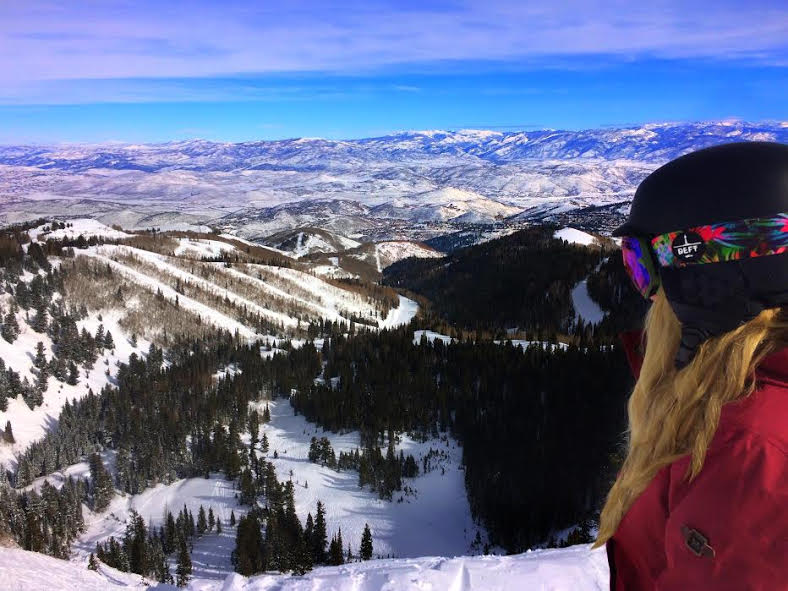 Some people might shy away from watching a video of themselves crashing during a snowboarding run that, more than a year later, still has them on the road to recovery.

Has she watched the recording of a February 2015 accident that left her with a concussion, not to mention back and leg injuries?

“Oh, all the time,” said Emily, 19, who has been snowboarding competitively since she was about 12.

Emily, who will be a Cal State San Marcos sophomore this fall, has tackled her recovery from that snowboarding mishap with the same determination that she uses in showing girls and young women the importance of Science, Technology, Engineering and Mathematics (STEM).

Just a couple of months after the accident, Emily not only participated in CSUSM’s Women’s Hackathon, she was part of a five-person team that took a grand prize. The biannual event is for female high school and college students who work in teams to design a website, game or mobile app that addresses a selected real-world challenge. Emily's team created a game called Calcium Crush to help increase awareness of bone health among adolescents.

Emily has long had a passion for computer programming, and the Women’s Hackathon experience put her on a path to help other young women learn about STEM opportunities.

“I did my best to inspire those around me and say, ‘Hey, you know what? Girls can do this, too. It’s not as hard as you would think it is,’ ” said Emily, who is majoring in computer science with a minor in German.

Emily met Youwen Ouyang, CSUSM’s department chair of computer science and information systems, through the Women’s Hackathon. Since winning in April 2015, Emily has assisted Ouyang in the planning of the event and also serves as a mentor to competitors.

Ouyang said she tried to stay close to Emily during the teenager’s first experience as a mentor in case Emily needed assistance. Ouyang quickly learned it wasn’t necessary.

“She’s really young, but the way she encourages and engages other girls is really impressive,” Ouyang said.

Emily also has given presentations to younger students as part of her effort to encourage more women to get into the technology field. She hopes that hearing about it from someone who isn’t much older than them will provide inspiration.

“It’s definitely getting better for women, I think,” Emily said. “Slowly but surely.”

Computer programming runs in Emily’s family. Her father is a senior engineer for Zynga and her twin brother, Michael, is studying video game programming at the University of Utah. Her mother was also in the business on the music side and encouraged Emily to learn a variety of instruments (Emily plays the clarinet, guitar and piano).

The possibility of combining two of her passions – computer programming and snowboarding – hasn’t escaped Emily. And the snowboarding injuries didn’t dampen her enthusiasm for the sport.

The accident occurred during Emily’s senior year of high school while in Arizona to visit colleges. She was attempting to jump over a tractor-tire feature at a terrain park. Emily said she was tired at the end of a long day and didn’t check her snowboard bindings.

Emily’s foot came off the board because of a loose binding as she bounced off the tire into the air, eventually landing on her head and back.

Emily’s brother was filming at the time, which is how she has been able to have repeated viewings.

Her parents, however, have not.

Emily said she can be stubborn when it comes to admitting that she’s hurt. After being checked out by the ski patrol, she insisted on skipping the hospital and getting back home so she wouldn’t miss school.

“So I sat on an eight-hour car drive back to California with this injury,” she said. “And the next morning I couldn’t move my leg and I had the worst headache. That’s when I went to the doctor. But it actually wasn’t until three weeks after my accident that they said, ‘Wow, you got a really bad concussion, too.’ ”

Emily persevered despite suffering through bouts of dizziness, light-headedness and nausea, among other symptoms.

The accident occurred about three months before she was to graduate from high school, but support from family, friends and teachers helped her get through those final months.

“It was definitely really hard,” Emily said, “but I didn’t want to give up because I wanted to say, ‘Hey, look, I had this really bad thing happen to me, but I’m still going to graduate.’ Because that’s the kind of person I am. I’m a hard worker. I don’t let anything stand in my way.”

Emily was able to participate in just one snowboarding competition last winter, but expects to be ready for a full schedule this season with aspirations of eventually competing in the Olympics.

While she loves Cal State San Marcos, it lacks one thing she needs to achieve that Olympic dream – snow. Emily is still mulling her options for getting back to Utah, where she spent most winters growing up, and one possibility is to attend graduate school at the University of Utah.

In the meantime, her family is planning to build a foam pit in their backyard for training.

“That way I can practice tricks into the foam pit without my parents being worried that I’m going to hit my head on hard snow,” she said. “That’ll be cool.”

Snow wonder: #CSUSM student a whiz in classroom and on board