Cougar Spirit Runs in the Family 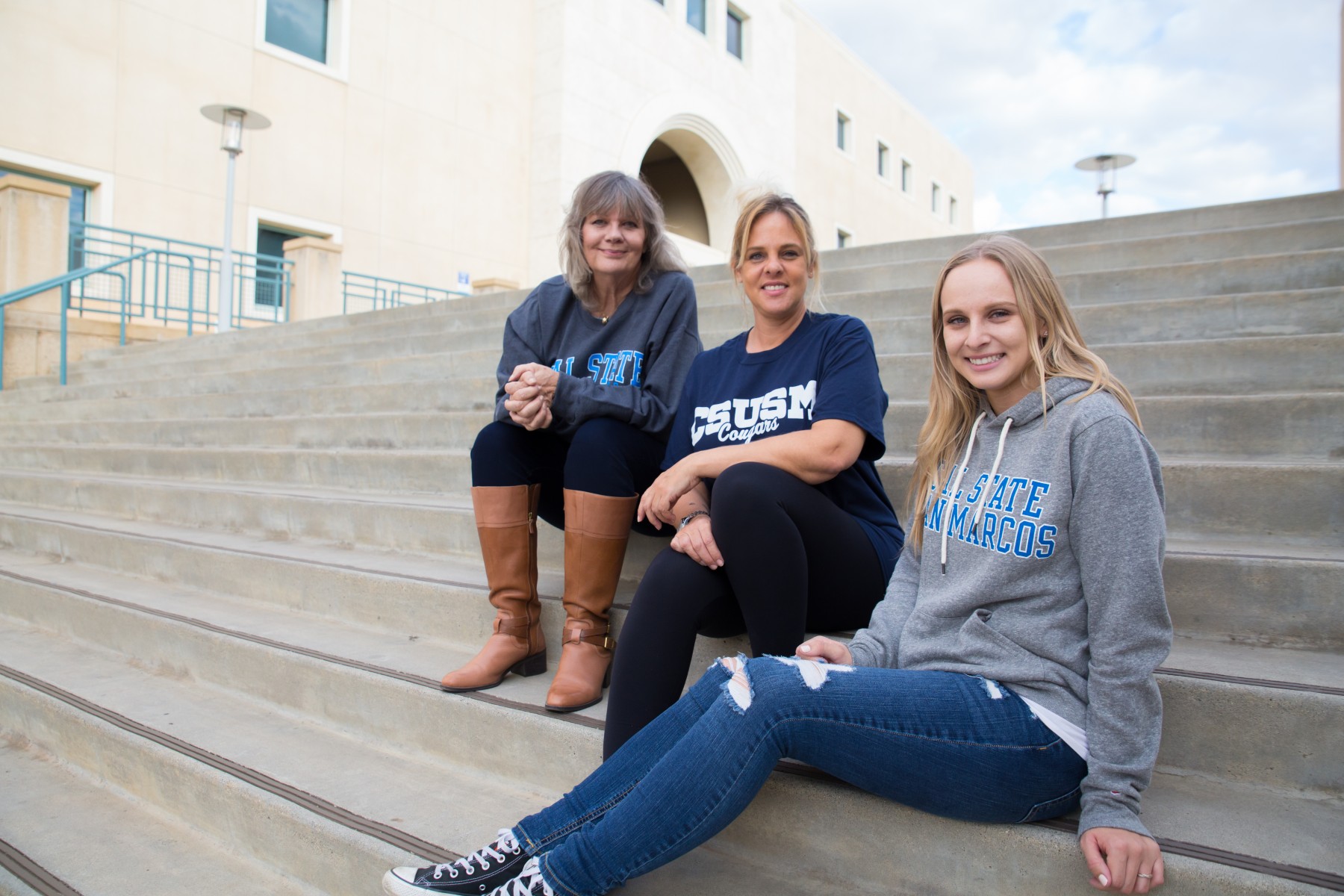 Three Generations at CSUSM
Rylee Leavitt (right) became a third-generation Cal State San Marcos student when she enrolled this fall after transferring from MiraCosta College. Her mother, Janelle Leavitt (center), received two bachelor’s degrees and a credential in the early 2000s. Her grandmother, Jane DeRoche (left), was part of the second commencement ceremony in CSUSM’s history, earning her English degree in 1993. Photo by Christine Vaughan

Back then, Jane DeRoche was a single mother returning to school for her bachelor’s knowing it would help her earn a better living.

“I gathered all my transcripts and kind of dumped them on the counter and said, ‘I want to go to school here. What do I have to do?’ ” Jane said.

Jane filled out a one-page application and handed it to a woman at the front desk along with her transcripts. As she gave the woman her materials, Jane asked when she would learn if she had been accepted. She was told to wait as the woman disappeared before returning a few minutes later.

Nearly a quarter century after Jane was part of the second commencement ceremony in CSUSM’s history, Rylee became a third-generation CSUSM student when she enrolled this fall (after completing a slightly more involved application process than her grandmother).

“My mom brought me to her classes here,” said Rylee, who is studying history with single-subject preparation for teaching. “I had a little yellow briefcase that I’d put my papers and crayons in and I’d pretend I was at school.”

The family’s ties to CSUSM – Rylee also has an aunt who is an alumna – came via an unexpected path.

Jane immigrated with her children to Australia when Janelle was 9, following a suggestion from her brother, who was a successful screenplay writer there.

“It was the golden years in Australia,” Jane said. “You could make a pretty good living and the cost of living was still pretty cheap, so I could make it as a single mom. Plus, I think I just wanted the intercultural experience as well.”

The family moved back to the U.S. when Janelle was almost 18. After spending her formative years in Australia, the transition to an American school proved challenging. School officials even wanted to put her in an English as a Second Language class.

Janelle didn’t graduate from high school, instead earning her GED. Having seen her own mother earn her degree while raising a family, Janelle began attending Palomar College at age 23, just one week after giving birth to Rylee.

“I always had it in my mind that moms could go to school,” said Janelle, who teaches high school English in Lake Elsinore and is working toward her Ph.D. at Pacifica Graduate Institute. 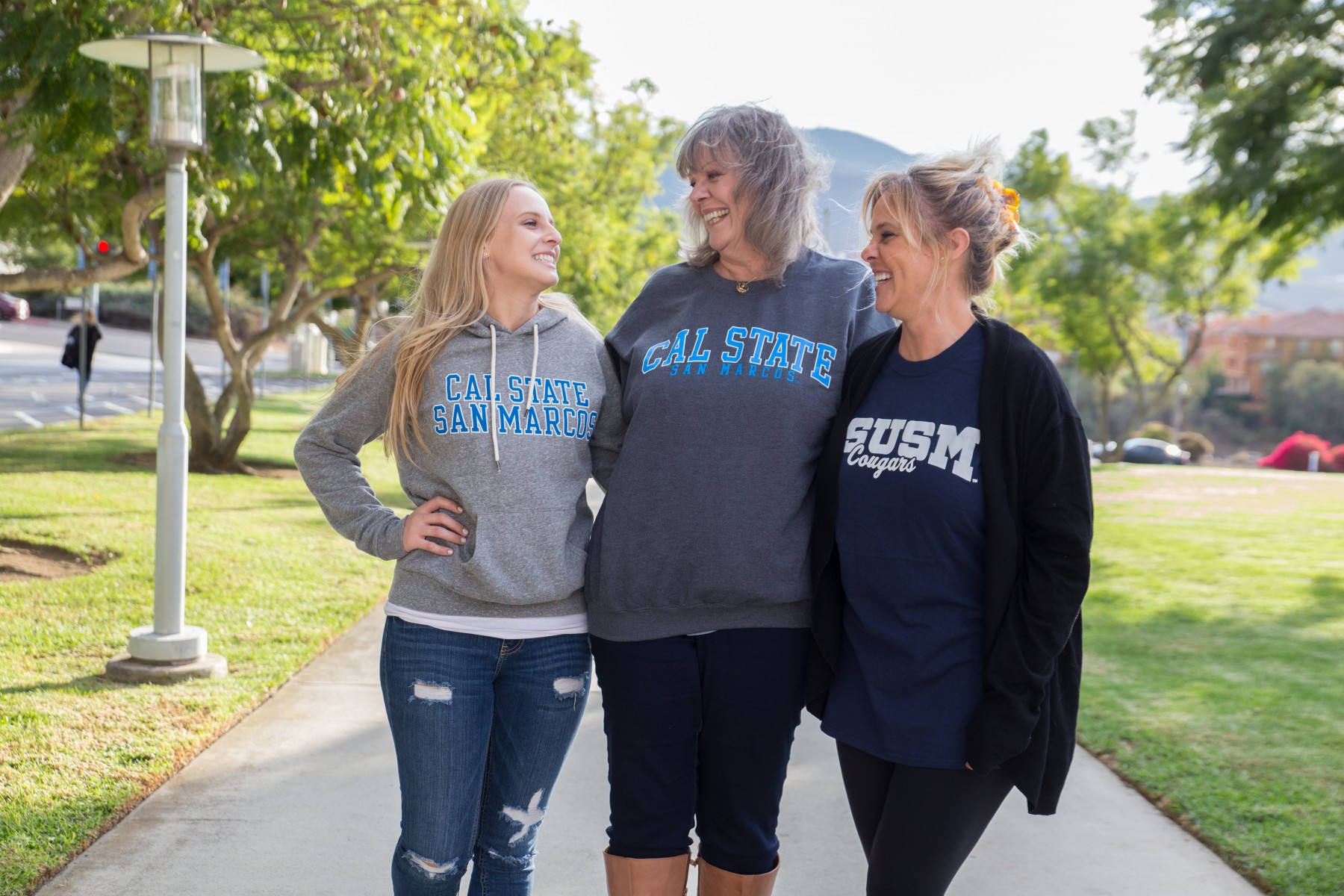 Three Generations at CSUSM
Rylee Leavitt (left) became a third-generation Cal State San Marcos student when she enrolled this fall after transferring from MiraCosta College. Her mother, Janelle Leavitt (right), received two bachelor’s degrees and a credential in the early 2000s. Her grandmother, Jane DeRoche (center), was part of the second commencement ceremony in CSUSM’s history, earning her English degree in 1993. Photo by Christine Vaughan

Rylee’s road to CSUSM was similar to her mom’s with one notable difference.

“I’m not graduating with kids,” she said with a laugh.

After high school, Rylee attended MiraCosta College, where Jane is the adviser for the student newspaper. Rylee was unsure what career path she wanted to pursue when she started, but a semester studying abroad in London helped her focus on becoming a history teacher.

“I’m very lucky that I’ve been able to travel,” she said. “When I studied abroad, I ventured to other places in Europe. I think that’s what fueled my love for history, just being immersed in it by myself rather than having my family hold my hand doing touristy things.”

Though she wasn’t yet alive when her grandmother graduated from CSUSM and was only about 7 when her mom graduated, Rylee is well-versed in her family’s history at the University.

Neither Jane nor Janelle had spent much time on CSUSM’s campus since they graduated, so both were amazed to see the growth first hand when they visited about a year ago as part of a campus tour with the elementary school class of Rylee’s youngest sister.

“There are buildings on all the places I used to hang out,” Janelle said.

Jane wasn’t even on campus when she began attending CSUSM in 1991 and the University was playfully nicknamed “Cal State Jerome’s” due to its location near the furniture store. When she told people where she was going to school, her answer always required clarification.

“I’d say, ‘It’s behind Jerome’s in kind of an industrial building,’ ” she said. “If you were going to an English class but went in the wrong door you were in Sparky’s Automotive or something.”

Jane got to attend classes on the permanent campus during her final year, but it was still very much a work in progress. There weren’t even numbers on the doors, making it a challenge to find your class.

“The paint was barely dry,” she said.

The campus underwent tremendous growth in the ensuing years, but many buildings were still years from opening when Janelle started attending classes in the late ‘90s. She remembers how the campus’ iconic César Chávez statue seemed all alone far from campus back then.

The campus’ footprint – and student population – continued to expand in the years following Janelle’s graduation, leaving both Jane and Janelle in awe when they took an extensive tour on that elementary school field trip.

“My mom and grandma were amazed – especially my grandma – to see how the University went from being so small to what it is today,” Rylee said. “That made me even more excited about coming here. I didn’t even apply to any other schools. I was set on coming here. It’s become a family tradition.”

Cougar Spirit Runs in the Family