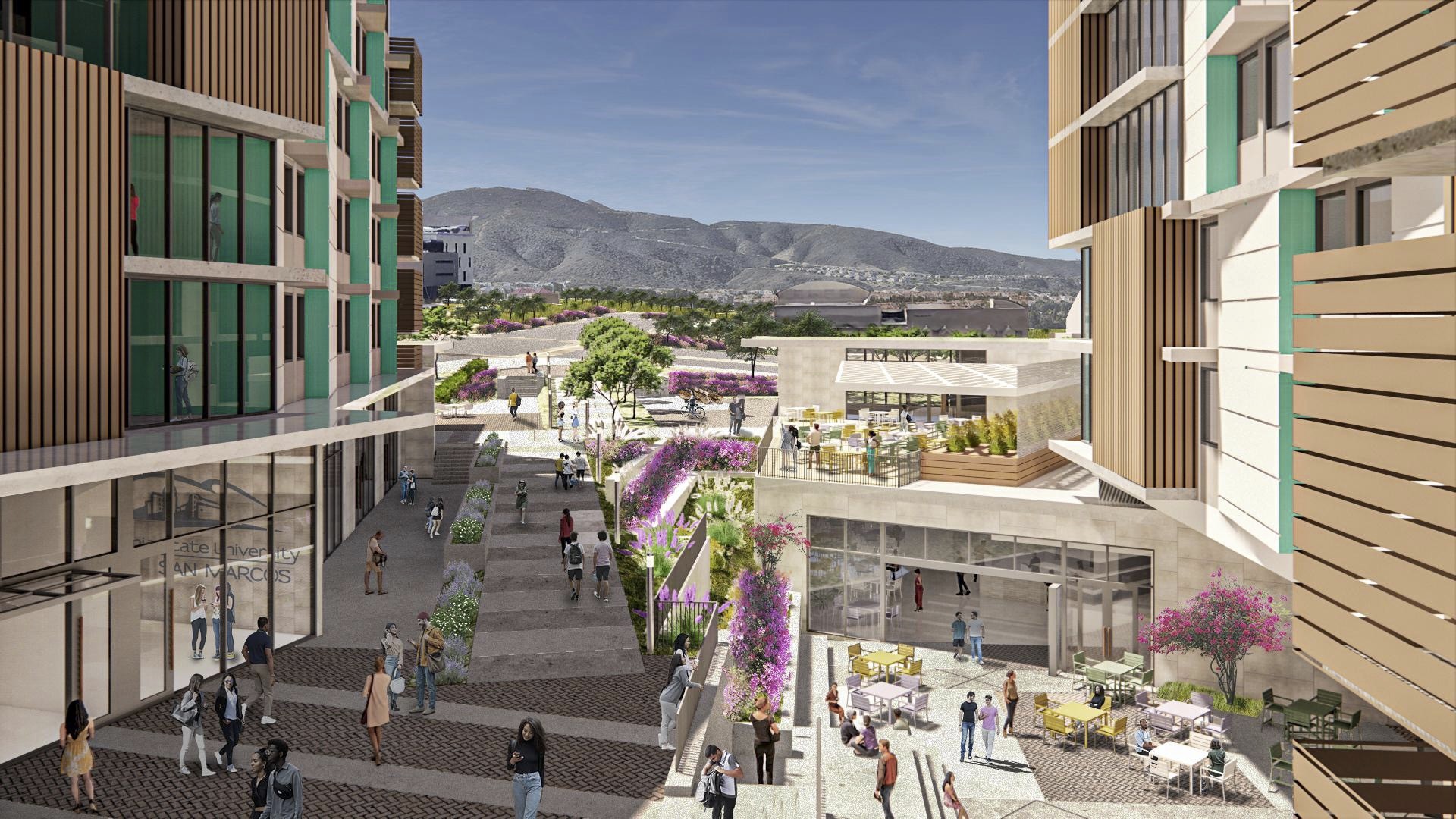 A conceptual rendering of the housing and dining complex that will be built at CSUSM, starting in 2024.

Cal State San Marcos plans to build a new affordable housing and dining facility on campus as the university does its part to alleviate the burden of the region’s housing crisis on students and lower their expenses to help them achieve their educational goals.

The University Village Student Success (UVSS) Housing and Dining Project will construct a 205,200-square-foot traditional student housing community with space for 600 residents along with a 19,481-square-foot dining hall with affordable meal plans and seating for 320. The ground-breaking for the facility is tentatively scheduled for February 2024.

The project is designed to reduce overall costs for students and thereby increase access to an education at CSUSM. It also will help support the smart-growth and environmental goals of the university and San Marcos by reducing student commutes from across the county and beyond.

The project will be funded in part by $91 million that CSUSM is receiving from Gov. Gavin Newsom and the California Legislature in their $300 billion budget for 2022-23. Of the $497 million being allocated for student housing projects on nine California State University campuses, CSUSM is being given the second-highest amount.

The UVSS construction will follow on the heels of new student housing and dining that are opening this year. North Commons, which opened for the start of the fall semester on Aug. 29, houses 332 students in the North City development across from CSUSM. Also in North City is Campus Way Cafe, an 8,000-square-foot dining hall that will open in September.

The UVSS project will establish a true first-year residential housing program geared toward acclimating students to university life. Ample space will be provided for administrative offices, living-learning classrooms and community rooms, and spaces to support basic needs programing such as a mental health liaison, a registered dietician and staff support.

CSUSM will make a commitment to offer available housing at UVSS to low-income students. Fifty-five percent of CSUSM students are first-generation college students, while 44% have an exceptional financial need.

“We’re excited to bring forward a transformative project that will set a new standard for affordable student residential living, representing a significant step in addressing student basic needs and helping our students of all backgrounds thrive academically and personally,” CSUSM President Ellen Neufeldt said.  “Student housing is an integral part of the student experience, and it can have a profound impact on academic and lifelong success. This project will ensure that more future CSUSM students will have that opportunity – a key component of our institutional mission of student success."

CSUSM is experiencing tremendous demand for additional housing, especially due to the high cost of living in the San Diego region. Off-campus housing costs have made local housing unattainable for many, especially underrepresented minorities and first-generation students. A recent institutional demand study revealed an ongoing demand of 571 beds based on current enrollment and a projected demand of 868 beds based on an increased enrollment of 20,000 students.

Until this year, CSUSM’s housing capacity was 1,547, less than 10% of the university’s student population. The University Village Apartments, built in 2003 as CSUSM’s first on-campus housing complex, features space for 681 residents. The QUAD, which opened in 2013 after CSUSM collaborated with a private partner to build suite-style units (like UVA), houses 866.  When UVSS is completed, the capacity figure will rise to more than 15% of the student population.

For many students, however, a true residential experience is often viewed as an option only for those with the financial means to make it a reality.

“Students should never have to decide between paying for rent or school supplies, or decide which utilities or basic needs they can live without while pursuing their dreams of becoming a teacher, nurse, scientist or entrepreneur,” said Jason Schreiber, CSUSM’s dean of students. “This new project will result in a clear public benefit, providing low-cost student housing and reduced rents so that students can focus their attention where it matters: their hopes and dreams for the future.”