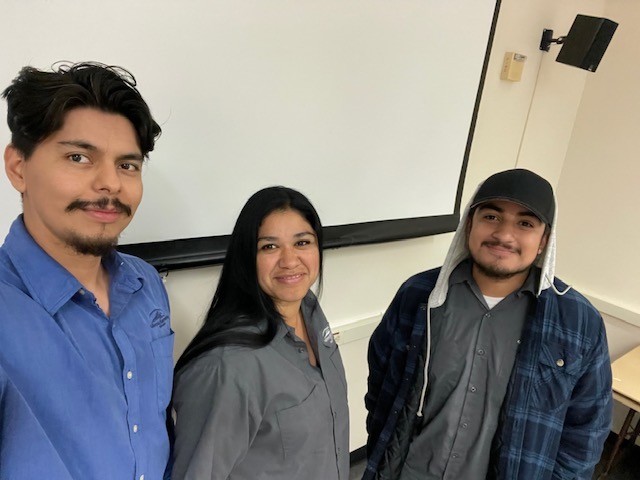 Three members of Cal State San Marcos’ Facilities Development and Management team were recently honored with citizen commendations for their help in the apprehension of suspects in a burglary on campus in March.

Two suspects broke into the Arts Building and University Hall in the early-morning hours of March 22, stealing about $20,000 in equipment and electronics.

CSUSM police arrested one suspect after a short foot pursuit, and several of the stolen items were seen for sale on a social media website the next day. CSUSM detectives and officers, assisted by deputies from the San Diego Sheriff’s Department, served a search warrant at the home of the seller and recovered about $6,500 worth of stolen property. The primary suspect recently pleaded guilty to the burglary.

“Our third-shift custodial staff really did a tremendous job,” said Lamine Secka, CSUSM’s police chief. “Because of their actions, we were able to not only arrest some serious criminal offenders but recover thousands of dollars of university property. We were very pleased to acknowledge their willingness to get involved with citizen commendations.

“This is another great example of campus safety being a shared, community responsibility. As much as we’d like to be, the police department can’t be everywhere at the same time, and we really do rely on our community members to let us know when something looks out of place.”

Secka said the incident was also an important reminder both to secure valuable property and to report suspicious behavior.

“We really want to encourage our campus community that if you ‘see something, say something,’ ” he said. “It’s important not to assume that someone else is going to call the police. This is a good example of that philosophy.”