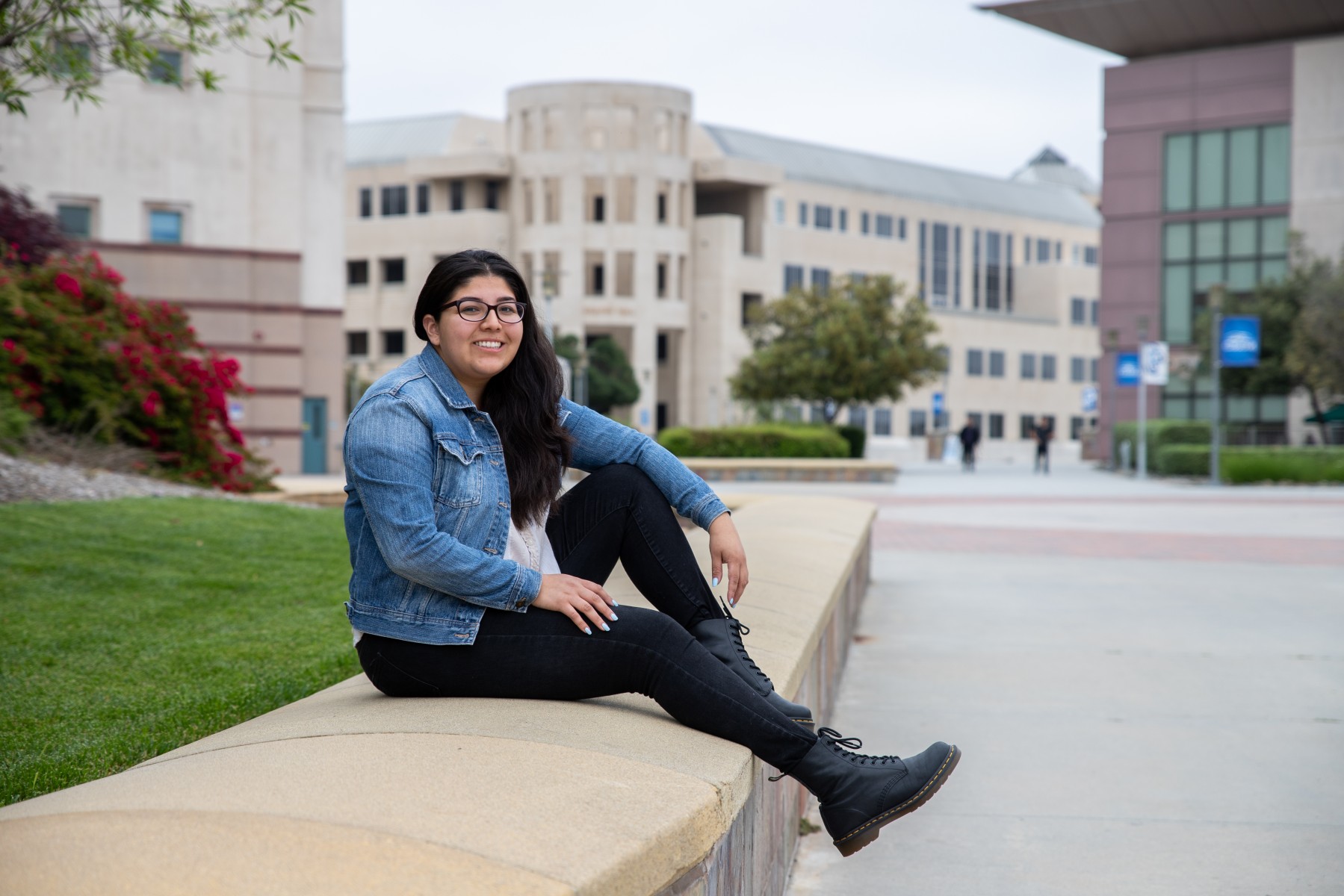 Daniela Carreon
The senior will graduate this week as the first person to earn a degree in Ethnic Studies at CSUSM. Photo by Chandler Oriente

In the first commencement ceremony for Cal State San Marcos’ College of Humanities, Arts, Behavioral and Social Sciences on Friday morning, there will be 212 graduates receiving a bachelor’s degree in communication.

There will be 115 who earn a degree in liberal studies, 108 in literature and writing studies.

And there will be a single graduate crossing the stage and being handed a degree in Ethnic Studies.

Daniela Carreon is the first person to graduate in the discipline of Ethnic Studies, which has been a minor at CSUSM since at least 2001 but which was officially approved as a major by the California State University chancellor’s office in December 2017.

“It’s an amazing feeling, but I don’t want to say I’m the first because I don’t like the title of it,” Daniela said. “I wish someone else was graduating with me, but I hope that next year or the following year there are going to be more and more and more. It’s really amazing to see that in the short amount of time since the major was established, there already is a graduate. It shows that there’s a want and a need for this to be here at Cal State San Marcos.”

CSUSM would still be waiting for its initial Ethnic Studies graduate if it weren’t for the diligence and passion displayed by Daniela. She declared a minor in the subject during her first semester at the university in fall 2014, and after some uncertainty at the outset, she settled on social sciences as her major, with a primary focus on sociology. She was excited when she discovered in spring 2017 that Ethnic Studies would soon be offered as a major, but she wasn’t able to declare it until last fall.

In the interim period, Daniela was forced to play a major game of catch-up on the courses that would be required in her new discipline. She began taking five or six classes per semester, supplemented by summer coursework at Palomar College, in order to check the boxes necessary to fulfill her goal of graduating in five years as a double major in Ethnic Studies and social sciences.

“I am elated to see Daniela graduate this spring, as I am sure are all of those faculty who have worked to see the B.A. in Ethnic Studies become a reality,” said Laurette McGuire, the program director. “Daniela has been a leader in Ethnic Studies since she declared the major. She reflects the values and dedication that is respective of Ethnic Studies’ roots in student movements of the late 1960s that emerged from student and community members’ demands for academic programs that reflect the experiences and histories of people of color.”

This spring, while many of her fellow graduates were winding down, Daniela took seven classes, including an independent study course with sociology professor Marisol Clark-Ibanez that involved students embedding themselves in local high schools to do ethnographic research on the experiences of undocumented students and the school personnel who work with them. She also completed a master’s-level course to get a head start on the master’s program in sociological practice that she will begin at CSUSM this fall. 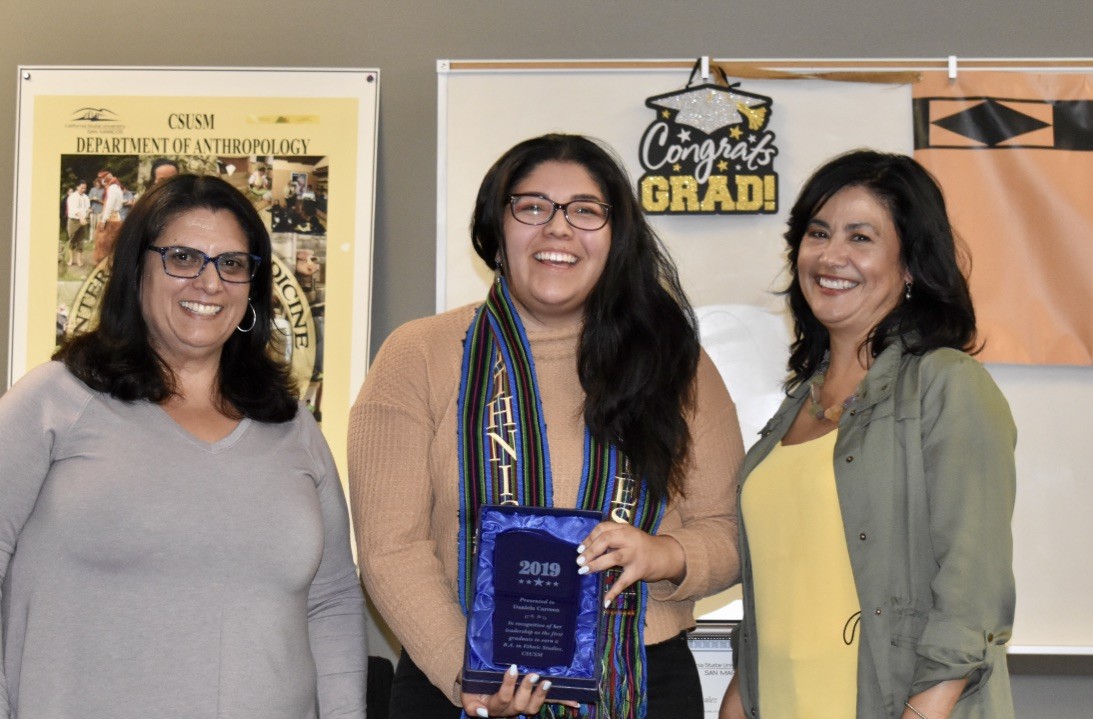 As if that weren’t enough on her plate, Daniela also worked 20 hours a week, her job duties split between the Cross-Cultural Center and the Dreamer Resource Office. To make it all possible, she generally stayed on campus Mondays through Thursdays from 8 a.m. to sometimes midnight or later, with Friday as a blessedly welcome day to rest, catch up on errands, or attend events related to her being awarded a Sally Casanova pre-doctoral fellowship through the CSU.

“Yeah, I’m here all the time,” Daniela said with a laugh. “I’m making my parking pass really worth it.”

She just completed her fourth year working at the Cross-Cultural Center, and Floyd Lai, the center’s director, has joked to her that she’ll be the answer to a trivia question: Who’s the only person to hold every job in the office?

“This last year we created a position because I didn’t want to lose her,” Lai said. “We made her a lead specialist because she has that much experience, with the charge of helping to grow our volunteer program. She did that pretty flawlessly and was such a benefit to our growth and visibility.”

Daniela had scant exposure to the ethos behind Ethnic Studies until she reached CSUSM. A first-generation college student from Escondido (her two older sisters also attended CSU schools), she went to elementary, middle and high school in Encinitas as an inter-district transfer. She recalls being in a tiny minority of Latina students at La Costa Canyon High, and it wasn’t until she started taking sociology and Ethnic Studies classes in college that she learned the language to describe her experience – terms like microaggression and covert and overt racism.

“When I came here, it was culture shock, like ‘There are people of color in my classes, I’m not the only one,’ ” Daniela said. “It felt welcoming. I felt so at ease that I didn’t have to be the voice and could just blend in.”

She said she’s proud to be the first graduate in a degree program that has been almost 15 years in the making, and she plans to pursue a Ph.D. at one of the few universities that feature a doctorate specifically in Ethnic Studies, with an aspiration of becoming a professor in the field, possibly even at CSUSM.

On her cap at commencement, Daniela will display a slightly modified version of a quote by famous African-American novelist James Baldwin that has inspired her: “The place in which we fit will not exist until we make it.”