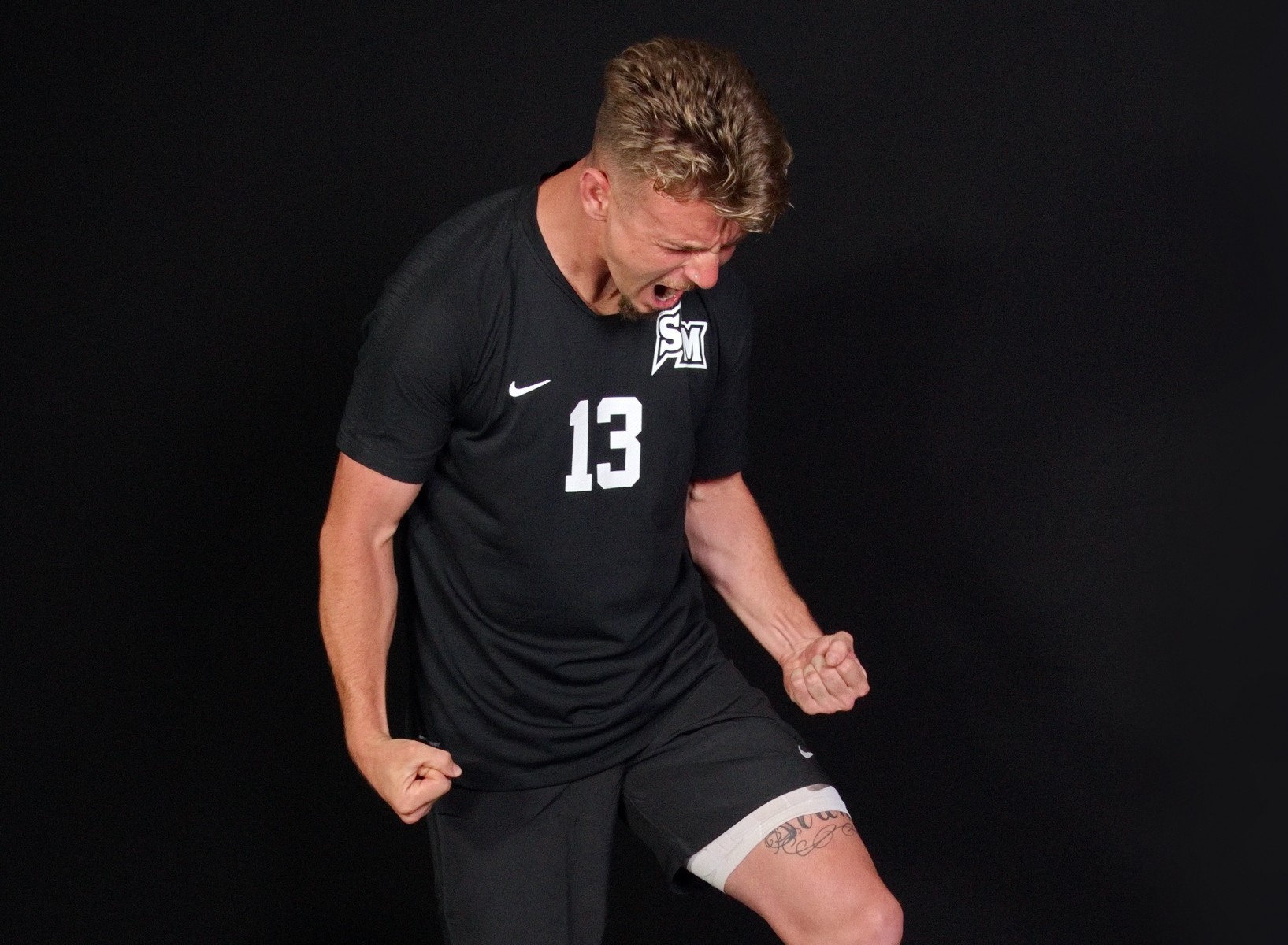 Dante Longo is back playing for the CSUSM men's soccer team after recovering from a horrific April 2018 car crash.

Doctors use the Glasgow Coma Scale to assess patients who have suffered traumatic brain injuries. Points are assigned for responses to eye, motor and verbal tests. The maximum score of 15 offers the best prognosis. A score between three and eight is considered most severe, and anything between three and five is categorized as potentially fatal.

Longo received that assessment following a car accident on April 7, 2018, and it came with a warning to family members that he might never awaken from his coma. The list of injuries Longo sustained in the wreck was staggering: broken elbow, collapsed lung, torn ligaments, torn ureter, fractures of his femur, hip, neck and pelvis, and severe injuries to his liver and kidneys. He lost eight pints of blood. The injuries were so catastrophic that Longo was listed on the accident report as a “suspected fatality.”

“His elbow was never set because they didn’t think he was going to live,” said Kimberly Cochran, Longo’s mother.

But Longo has overcome long odds and dim prognoses throughout a remarkable recovery that not only has him back at Cal State San Marcos working toward his bachelor’s in communication but thriving as a member of the university’s men’s soccer team.

“They didn’t think I was going to play soccer again,” Longo said. “They said that was out of the question. They’re like, ‘It’s more a matter of whether he’s going to walk.’ ”

Dante Longo was in the passenger seat of this car when it was struck by an SUV traveling 80 mph in April 2018. Despite being in a coma for nearly a week following the accident, Longo has returned to the CSUSM men's soccer team in 2019.

It wasn’t like Longo to be late, but he was nowhere to be found as game time approached for a spring soccer match against Point Loma Nazarene on April 7, 2018.

“Dante is the kind of guy that would text you and say, ‘Coach, I’m going to be five minutes late,’ and then be five minutes early,” said Ron Pulvers, CSUSM’s men’s soccer coach. “He was always really good about letting you know if there was any issue.”

Players told Pulvers that Longo had gone home to Chula Vista the previous night to see his father, Charlie, who often cooks him a big pasta meal before a game. But repeated calls and texts to Longo went unanswered.

After the game, Pulvers sat with Todd Snedden, CSUSM’s associate director of athletics, as the women’s team prepared for its match. Pulvers told Snedden about Longo’s inexplicable absence, and they started reaching out to numerous people trying to determine Longo’s whereabouts. Eventually, someone told Pulvers they had seen a visibly upset Cochran in the parking lot before the game. Moments after learning that Cochran had left before the game started, Pulvers received an email from her telling him that Longo had been in a horrific car accident and transported to Scripps Memorial Hospital La Jolla.

Longo and Charlie had been traveling north in the carpool lane on Interstate 15 en route to CSUSM for the game. They were near Carmel Mountain Road when Charlie’s car was cut off and struck attenuating barrels, which are used to reduce the damage from automobile accidents. However, the car spun after hitting the barrels and was struck on the passenger’s side (where Longo was sitting) by an oncoming SUV going an estimated 80 mph.

Longo has no memory of the accident and, despite the severity of his injuries and the long road to recovery, he has maintained his sense of humor.

“My dad only had a sprained thumb,” Longo said. “He drinks some crazy protein shakes or something.”

Longo wasn’t as fortunate. Doctors told his family that there was a strong possibility he would not come out of the coma. Longo’s sister, Brie, lives overseas and his brother, Chris, lived in Hawaii at the time, but both were by his side at the hospital within a day of learning about the accident. A family member remained bedside 24 hours a day.

On the morning of Friday, April 13, Brie, Charlie and Kimberly were resting in the intensive care unit lounge when they heard Chris yelling. After nearly a full week in a coma, Longo had woken up.

“Knowing Dante and who he is, I had no doubt about what his recovery was going to look like once he woke up,” Pulvers said. “He’s got an iron will. He’s one of the toughest characters I’ve ever been around. He’s incredibly determined and persistent.”

The myriad tubes coming out of his body were a constant source of frustration for CSUSM student-athlete Dante Longo, who repeatedly tried to tear them out after waking from a coma.
CSUSM student-athlete Dante Longo was in a wheelchair for about two months after waking up from a coma sustained in a horrific April 2018 car wreck.

Determined and persistent aren’t the only adjectives people use when describing Dante. Affable, charismatic, gregarious -- pick any one of a dozen synonyms, and it has probably been used. Longo is happy to start a conversation with anybody, whether he has known them for five years or five minutes.

“He honestly has more friends than any person I’ve known in my entire life,” said Kevin McCarthy, an assistant coach for the men’s soccer team.

Those friendships translated into a steady stream of visitors during his time in the hospital and throughout his recuperation. NFL star Eric Weddle and Major League Soccer coach Peter Vermes were among those sending well-wishes via social media, and Cochran was astonished by the endless support her son received from the tight-knit soccer community.

“People filled the hospital,” she said. “I had coaches from when he was 8, 9 years old reach out. I didn’t even call them. They just knew.

“We’re so lucky that the people who love him spoke up. They came in and he felt it.”

While the encouragement and support from friends was critical, Longo still faced a long, often frustrating, recovery process that continues to this day.

Longo’s awakening from the coma was gradual. His memory of those first few weeks in the hospital is spotty, though he has seen photos and videos that family members took as he made incremental improvement.

Even after he woke up from the coma, blood clots and seizures remained a lingering concern. It wasn’t until nearly three weeks after Longo first awoke that Cochran could breathe easier and feel like her son wouldn’t die.

The myriad tubes coming out of his body were a constant source of frustration for Longo, who repeatedly tried to tear them out. He actually succeeded in pulling out a trach tube from his throat, to the horror of the speech therapist who witnessed it. Longo has no memory of doing it, and his family only learned later that such a maneuver can be potentially fatal.

Longo was wheelchair-bound for about two months before graduating to a walker. He continued to make progress over the ensuing months, from walking on his own to kicking a soccer ball to participating in strenuous workouts.

Today, 18 months removed from the accident, Longo looks like the picture of health. He has regained the nearly 40 pounds he lost after the accident and has participated in practices and games with the men’s soccer team after being cleared to play in August. His playing time has been sporadic as he continues to regain his mobility while learning to play with a metal plate in his hip, but he looks much like the person he was before the accident.

“He’s just remarkable,” Pulvers said. “He plays 100% and gives everything he’s got every time out.” 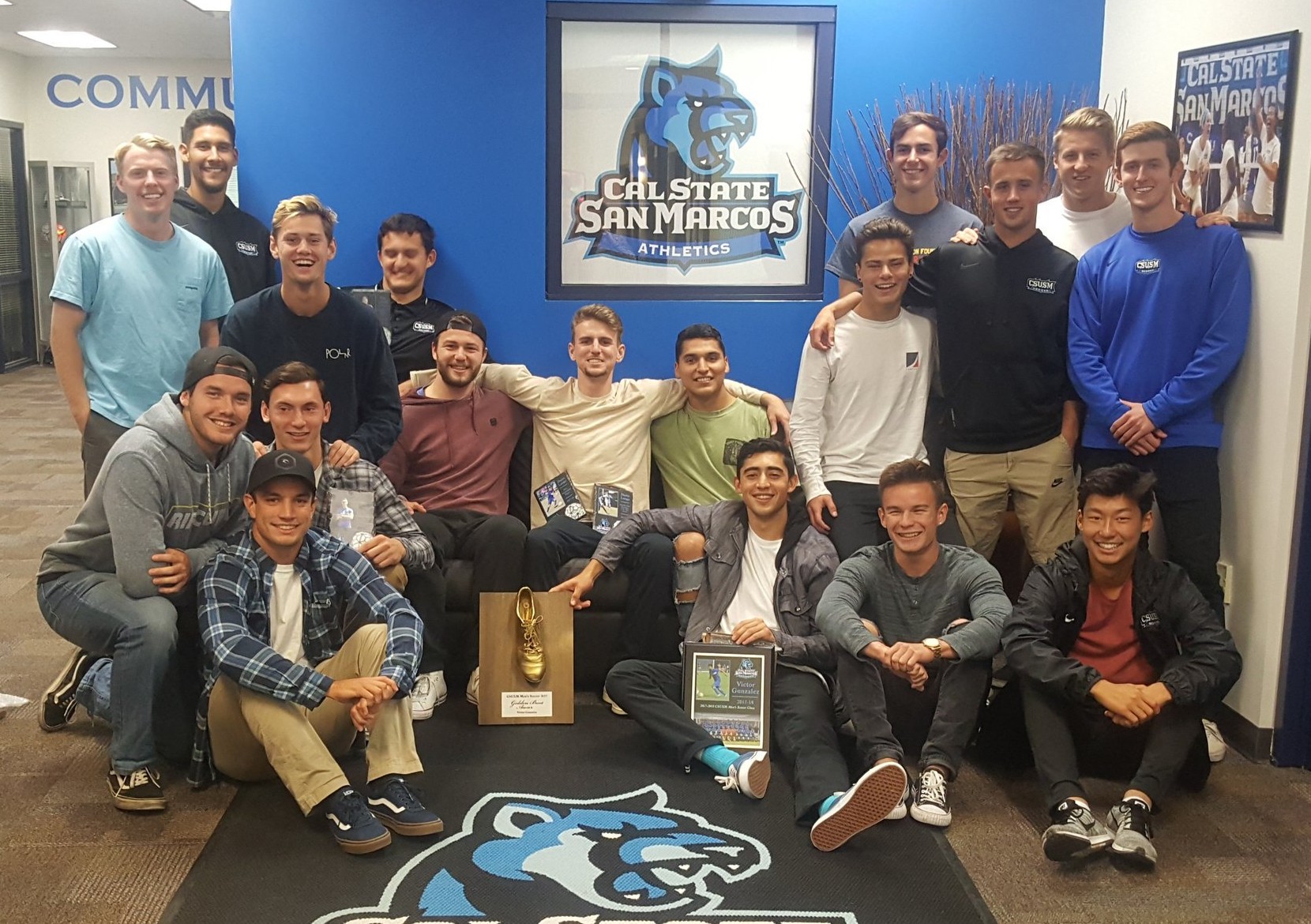 Teammates surround Dante Longo in his return to campus in May 2018 after spending more than a month in the hospital following a car accident in April 2018.

Longo is still dealing with the effects of the traumatic brain injury he sustained, and Cochran said dealing with cognitive issues will be an ongoing process for him. There are memories from before and after the accident that Longo will never recover. Doctors recommended that he take a year off from school to allow additional recovery time, but Longo was eager to return to CSUSM and took a light load last fall to ease back into his studies. He credits CSUSM’s Disability Student Services for the department’s continued support in helping him transition back to school and helping him manage his memory retrieval issues in the classroom.

Longo knows he likely will face additional physical challenges in the coming years, particularly related to his hip. But simply being back on the field with his teammates has provided joy that many didn’t think he would ever experience again after the accident.

“I wasn’t playing a lot at the start of the season because I was still getting used to the plate in my hip, and I was really frustrated. But at the same time, I thought, ‘Dang, I shouldn’t even be here right now. I shouldn’t be able to walk on the field. Somebody should be pushing me out or something like that.’ That’s why I’m happy.” 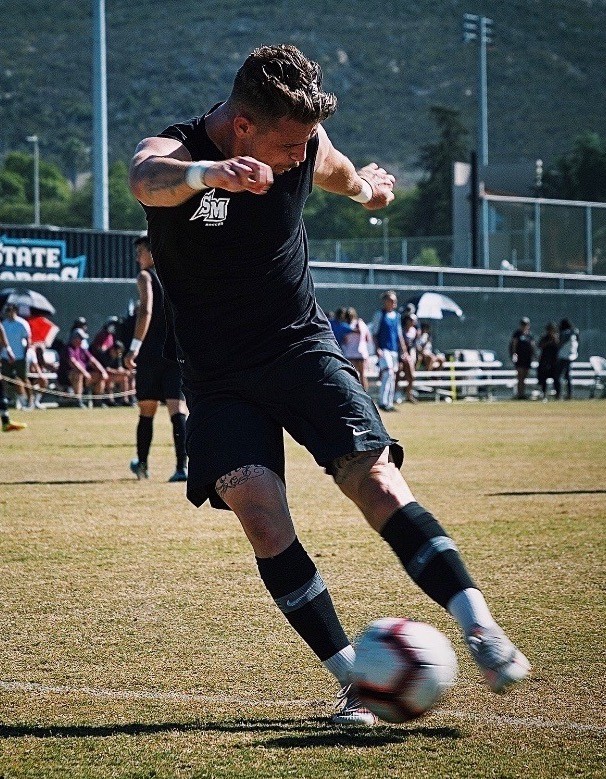 Dante Longo is back playing for the CSUSM men's soccer team after missing last season while recovering from a car accident that left him in a coma for nearly a week.