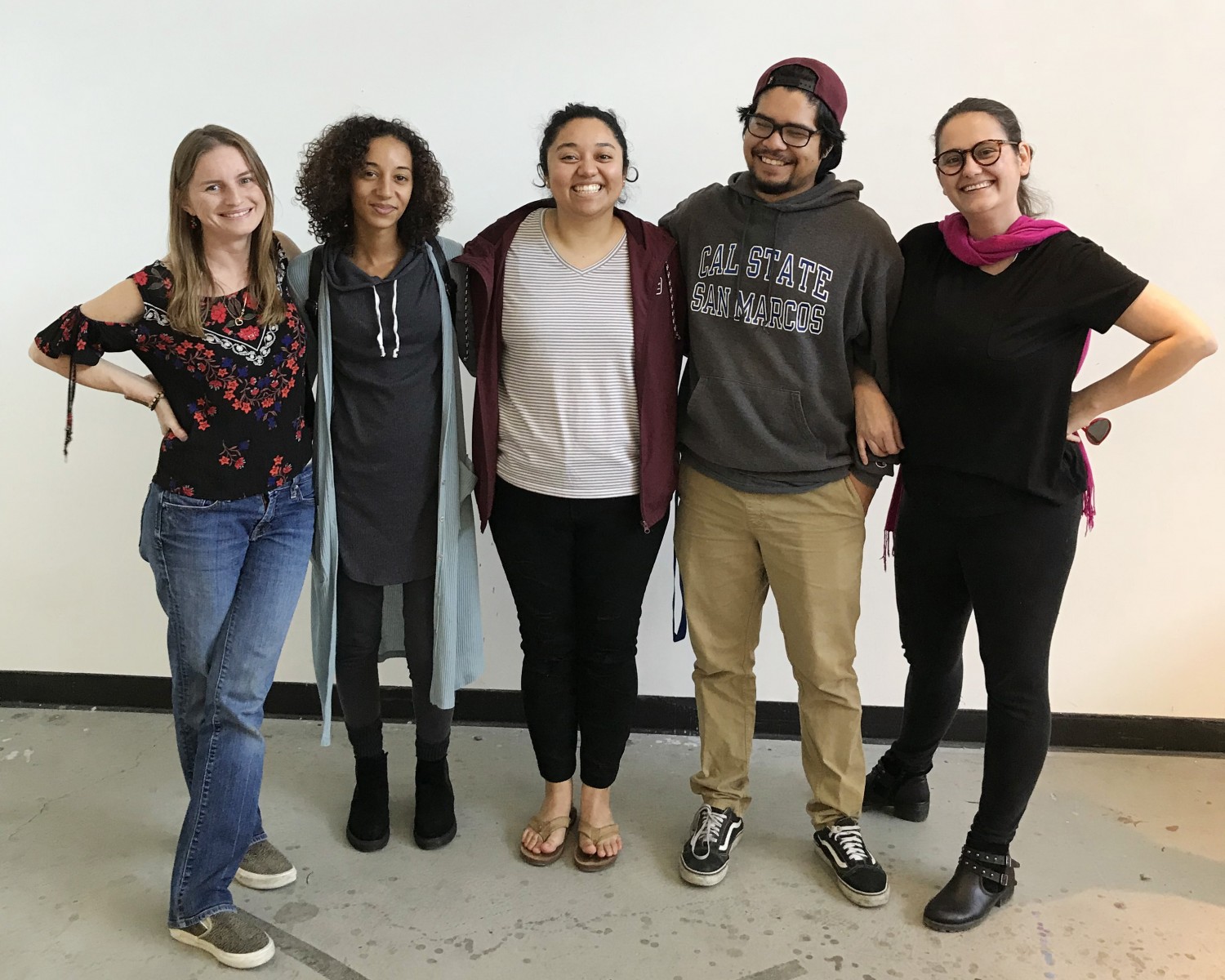 "DesEscondido" exhibit
The five students who will show their work at the California Center for the Arts in Escondido: (left to right) Stephanie Williams, Hanaa Abusalih, Kimberly Lopez, Saul Cigarroa and Ingrid Trovao.

When the San Diego art collective Public Address approached Judit Hersko, a member of the group, in 2017 about presenting a piece of work for an exhibition in Escondido, she countered with a better idea.

Since Hersko, an associate arts professor at Cal State San Marcos, views her role as an educator as primary at this stage of her life, what if she were to guide a group of students who would create the artwork instead?

“My public art is teaching,” Hersko said, “to get the next generation involved in these important matters.”

With some trepidation, the members of Public Address agreed, and that summer Hersko assembled five students who had taken her class called Process of Art and who were particularly serious about pursuing careers in the field. More than a year later, the fruits of their labor soon will be put on display.

This Friday, Sept. 28, the California Center for the Arts, Escondido will hold an opening reception for an exhibition (that will continue through Nov. 18) titled “DesEscondido: No Longer Hidden” – an array of multimedia artwork that explores how things can be both obscured and visible in a city whose name, in Spanish, means “the hidden place.”

The exhibition will include pieces by 16 professional artists as well as the CSUSM quintet – Hanaa Abusalih, Saul Cigarroa, Kimberly Lopez, Ingrid Trovão and Stephanie Williams. In conjunction with Hersko, they devised the sub-theme of “Net(work),” an integrated installation about subjects such as immigration, native history and sustainability.

“I’m incredibly impressed and proud of them for what they’ve achieved,” Hersko said. “Every step of the way, they were completely professional and went further and took things deeper and kept finding better ways to express their ideas. This is what makes an educator happy, when there are moments like this.”

The five students dived into the project almost as soon as they first came together in the summer of 2017. They organized a series of field trips to Escondido to visit places like the history center and the public library’s archives, and to talk to residents of disparate backgrounds about their stories. Then they would reconvene on campus weekly to talk about their discoveries.

Gradually, their research evolved into more personal connections to the material. With Hersko’s guidance – and with the invaluable hands-on assistance of School of Arts shop technician Judy Ryan – they began to create works that reflected their chosen themes.

“Through our research, the theme of ‘unhiding’ quickly became the theme of acknowledging the unheard and marginalized voices of the city,” said Kimberly, a senior majoring in visual arts and communication. “Another thing we did was present information or visuals that connected to each of us in some way or another like a web.”

Hersko’s goal was for the students essentially to complete their projects – or at least a rough draft of them – during the fall 2017 semester, leaving plenty of time for tinkering or revamping in the spring. The group even held a one-day exhibition on campus for friends and family last December.

“Some of them really learned for the first time in their lives what it means to develop something over time,” Hersko said. “Having the time to fail and try things again and go back and do more research, to have enough time for something to grow to be serious.”

Four of the students made physical objects, but Ingrid took a different route. A senior whose interdisciplinary major focuses on performing arts and theater, she has built a piece that incorporates a performance aspect. It’s a structure that she compares to something like a street vendor cart, but on a hand-carved table, with a hot plate on the surface. On opening night, she will mix eight parts flour and two parts yogurt to make bread that she will bake and then serve to the audience.

The flour represents the 80 percent of Escondido’s population that is documented, and the yogurt represents the 20 percent that is undocumented (the figures are estimates based on U.S. Census data and Ingrid’s own research). Bread was chosen because of the subject who inspired her – a Latina woman who worked at an Escondido bakery that Ingrid used to frequent.

One day soon after the 2016 presidential election, Ingrid stopped in the bakery and saw the woman crying. She told Ingrid that she was scared because of what Donald Trump’s victory might mean for DACA students like her. Remembering that conversation, Ingrid went back to talk to the woman for her project the next year, and she was gone. No one could tell Ingrid anything about her whereabouts.

“Escondido is actually split into two different sections – one is very visible and has access to commodities, and the other we don’t even know where they are. They disappear from one day to another,” Ingrid said. “People are in fear. Just like that woman, how many more could be invisible and disappearing?”

The rare process of creating and adapting art over such a long period is something the students won’t soon forget.

“Ultimately, this project ended up being both personal and timely for all of us,” Kimberly said. “We can’t wait to share it with our community.” 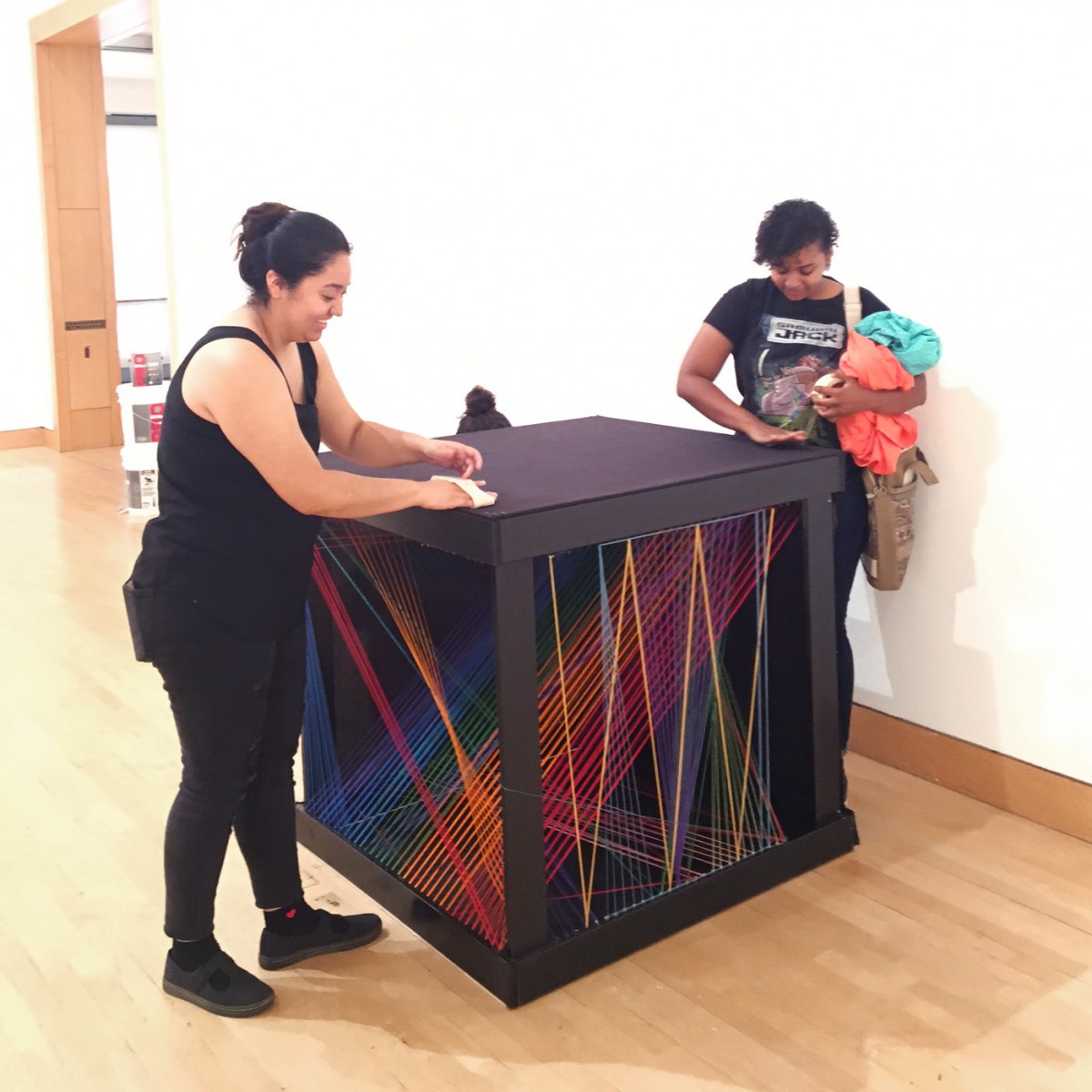 “Next and Final Stop” by Hanaa Abusalih

Hanaa’s choice of medium plays on the metaphor “the thread of life” and reflects on patience as well as being thankful. Growing up, the artist’s own journey was centered around the Escondido Transit Center. For years, Hanaa planned her daily routines around these routes, and at the center of all these plans was Escondido –her safe zone. All points met here. She has come to appreciate the meandering roads she had to take to reach her destinations. After some time, these routes weren’t just colored lines on a map, but memories. Long journeys with meaningless stops along the way eventually became an opportunity to discover the many treasures Escondido had to offer. The teal line is a route that brought two people to one destination, lying at the center of their opposite worlds. This is a map of her life’s journey, struggles and blessings in disguise. It wasn’t always a straight shot home for Hanaa, but when forced to take the longer route, she discovered her greatest treasure along the way. 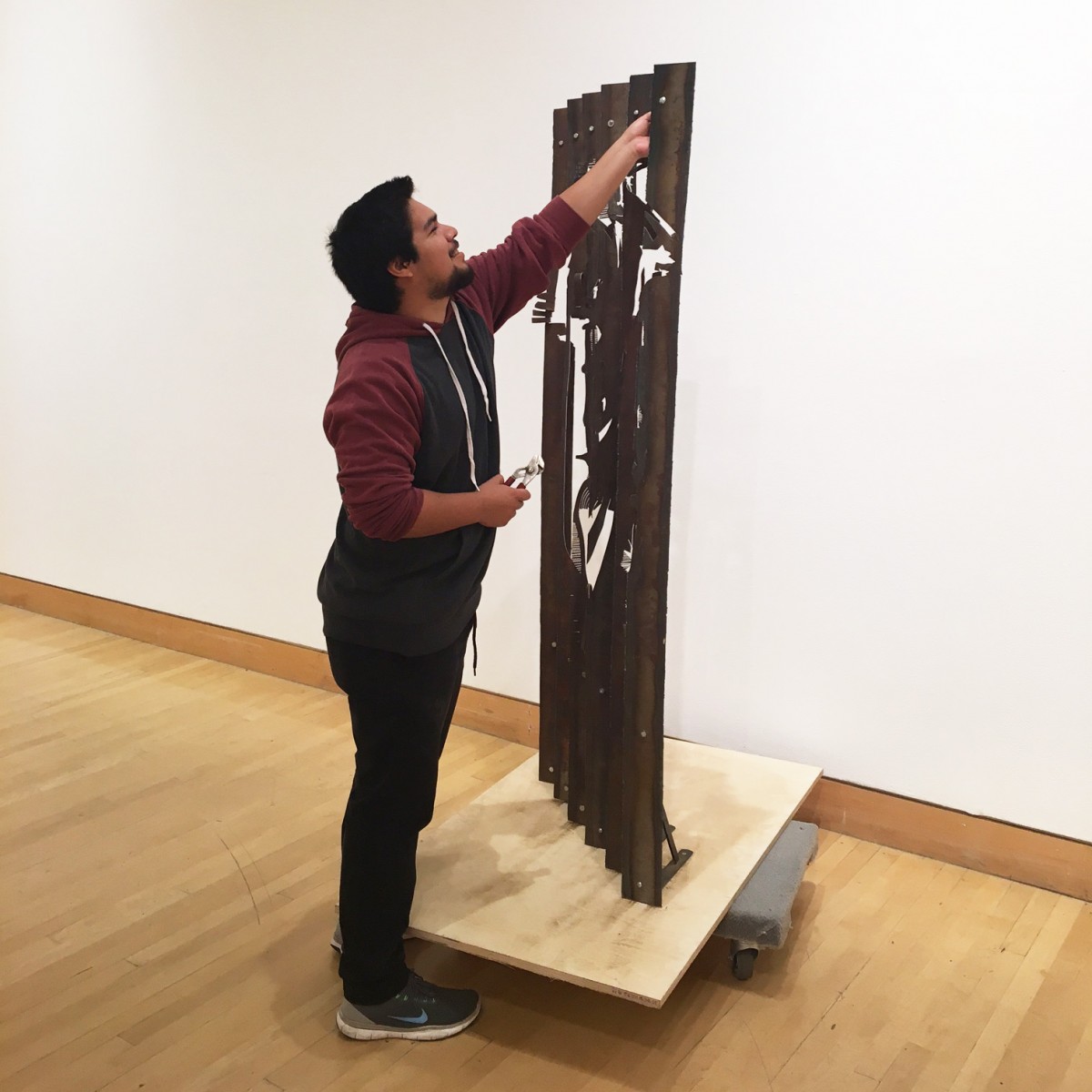 “Merging from the Shadows” by Saul Cigarroa

This project explores the history of immigration in Escondido and the dislocations of people who lived in the region before the establishment of the city. The artist conducted interviews as well as archival research to uncover the present. The materials used, such as light and steel, metaphorically speak about the hidden treasures of Escondido and shed light on the history of the city. By creating a steel construction, Saul is referencing the U.S-Mexico border fence, which is made of similar materials in our region. Metaphorically, steel also represents the legal and bureaucratic walls or obstacles that the city government of Escondido erects to push away and exclude immigrant populations. Saul selected a 19th-century photograph from the archives representing a Native American woman looking out over the landscape of Escondido. The artist cut the image into the steel, and when lit with a focused light source, the cut-out projects a shadow, thereby conjuring the ghostly presence of lost narratives. 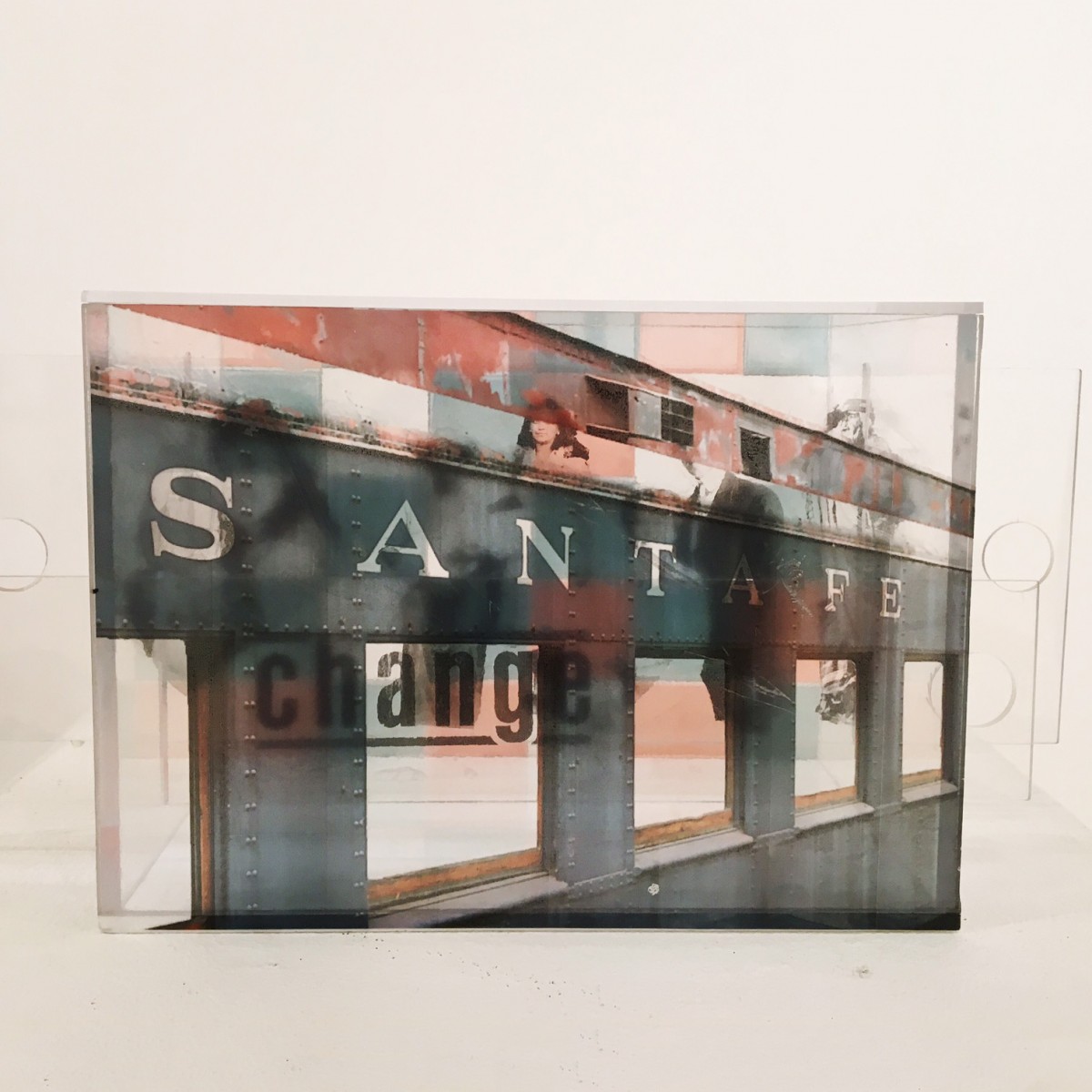 This work explores the ideas of migration, movement and human presence within the city. From the indigenous Luiseño tribe, Spanish rancheros and Mexican migrants, to the artist’s own family, different groups have entered, inhabited, and then displaced populations in Escondido. However, every presence remains inexplicably connected to the land. The transparent images highlight the interwoven history of Escondido, helping the viewer perceive the layers through the translucent material. The process of sliding the panels through the outer windows emphasizes the shifting landscape and the importance of transportation. One side features the Santa Fe train located in Grape Day Park, while the opposite has the tile found at the Escondido Transit Center. The four portraits inside the box represent a short timeline of inhabitants closely connected to the region and the artist herself. The images of the California Indian and of the white couple are borrowed from the Escondido Public Library Pioneer Room archival collection. The other two portraits are from the artist’s family collection. The remaining images were captured by the artist in the city of Escondido. 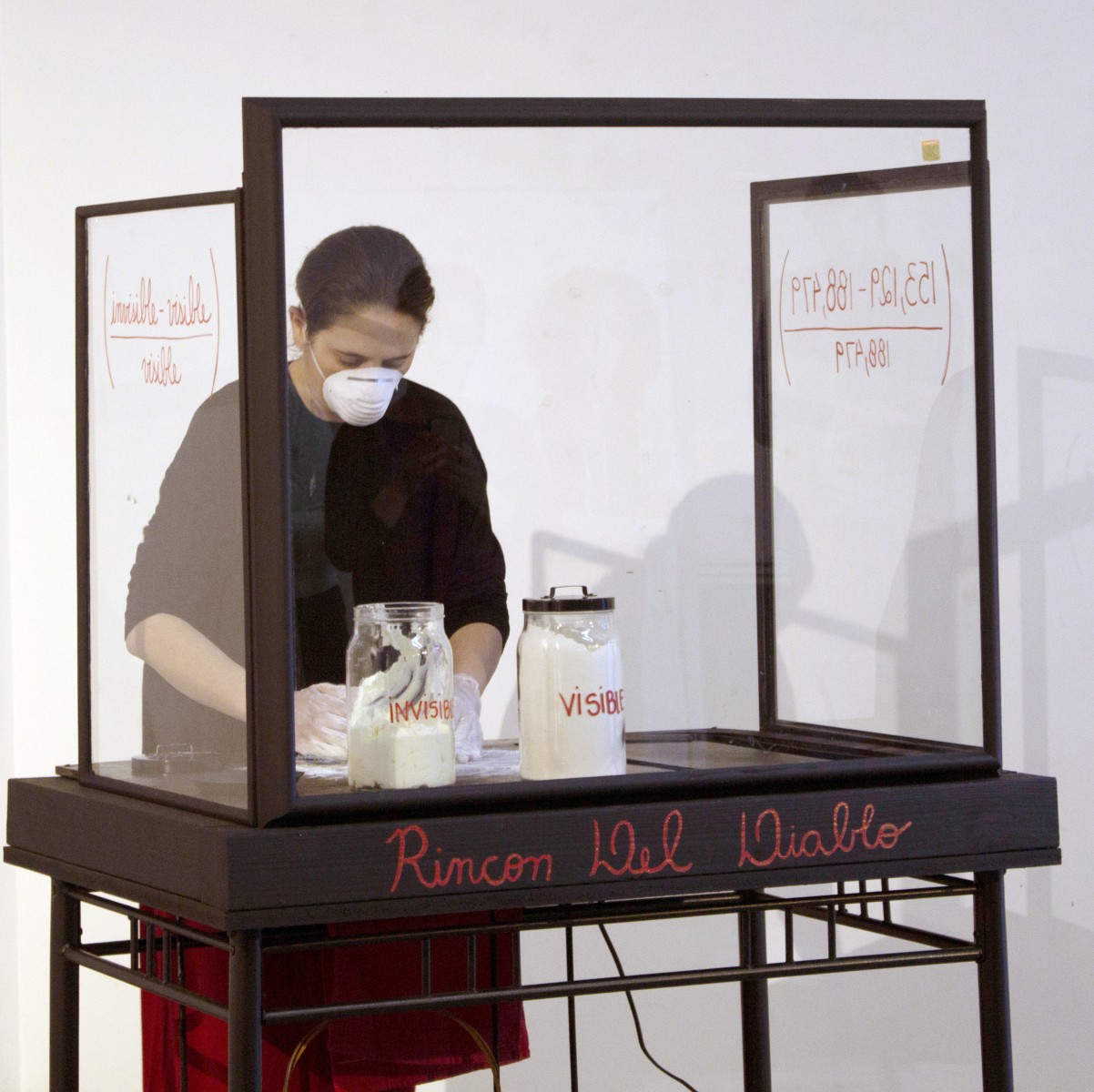 “The Bread that the Devil Has Kneaded” by Ingrid Trovão

Escondido, originally named “El Rincon del Diablo” or “The Devil’s Corner,” is the focus of this installation performance. Proposing to “unhide” its true population, Ingrid uses U.S. Census data for the “visible” numbers to represent the documented residents of Escondido. To uncover and estimate the “invisible” numbers of undocumented residents, the artist conducted research. Inspired by how John Cage utilized a consistent mathematical formula for composing his music, Ingrid adopted the relative change formula to find the ratio between the visible and invisible numbers. This ratio was used to develop the recipe for the bread made during the performance, as well as to design the proportions of the installation and the garment worn by Ingrid. The symbolic choice of making bread evokes union and making peace among those sharing the bread, for in many different cultures those who “break bread” with each other make peace. 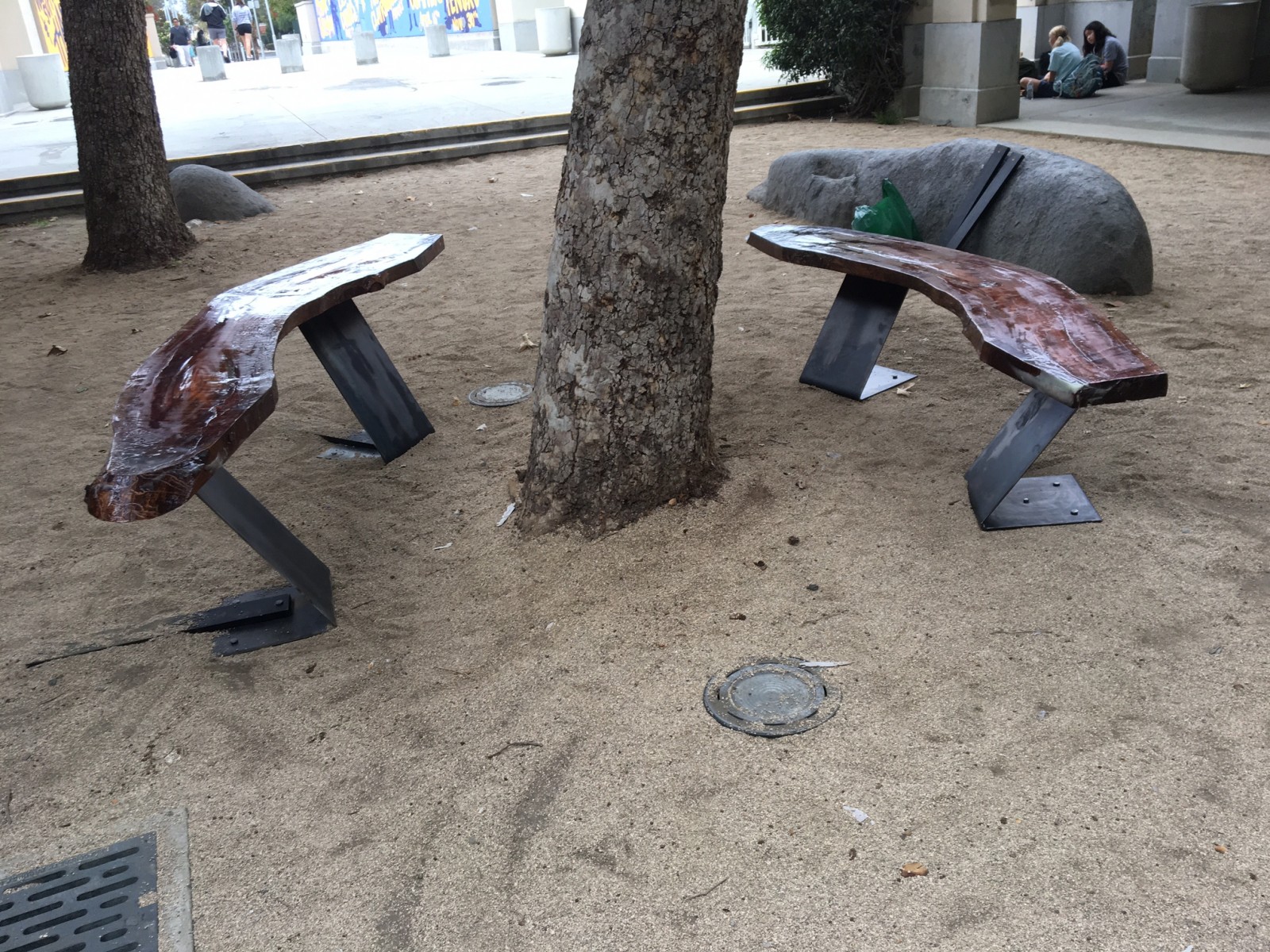 By their existence, and by their activities, humans have caused drastic changes in biodiversity, including the transfer of plants and animals around the world. This brings to question species nativity. Can non-native species be considered native even though they have been introduced? How long must a non-native species thrive in an environment before it is considered to belong? The eucalyptus tree was originally introduced to San Diego County, and specifically Escondido, during the 19th century. Though eucalyptus is not native, the tree has become a permanent part of the landscape in Escondido and all along the state of California. While there are some who protest eucalyptus as an invasive, non-native species, many Californians view eucalyptus as a part of the natural environment. Growing up in the area, Stephanie recalls the sight and smell of eucalyptus trees throughout Escondido. The artist utilizes recycled eucalyptus wood to build two benches. She hopes that these will serve as sites of contemplation for those who sit on them, inspiring questions of presence and belonging.