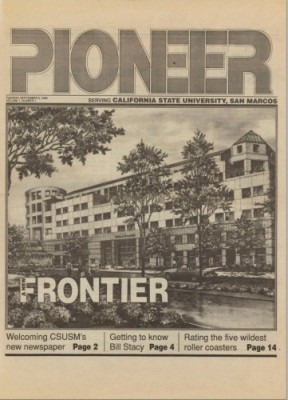 Launched on September 4, 1990, just a week after CSUSM opened its doors for the first time as a new university, the first issue of CSUSM’s student newspaper—then known as The Pioneer—was published.

The inaugural issue featured a cover story on the Italian architectural style of the up-and-coming campus, a column by Founding President Bill Stacy and an opinion piece that criticized the media’s use of sensational video editing techniques. Now these stories, and thousands more chronicling 25 years of student reporting, are available in the inaugural project of the University Library’s online archives.

The University Archives in the University Library is home to the official historical records of Cal State San Marcos. Judith Downie, Humanities and Archives librarian and Government Documents coordinator, championed the project with the support of Library Dean Jennifer Fabbi, as one of the most visible and long-standing records of campus history.

“Because it is created by students, for students—without the input of faculty or administration—it is the unfiltered and uncensored voice of students,” she said. “It’s interesting to see how the paper has evolved from editor to editor, and how issues of the day were covered by reporters.”

The online exhibit includes You Name It, the masthead the paper was published under in October 1993 when the editorial staff launched a contest to rename The Pioneer. The following month, the paper became known as The Pride. The current newspaper’s title, The Cougar Chronicle, was adopted in January 2012.

The novelties captured in print stand out, including an issue in 2004 that was completely handwritten and an article in 2001 that debunked the myth that CSUSM’s buildings were designed by a prison architect.

Campus history is also marked with articles that showcase the first freshmen class in the fall of 1995 and the construction of University Hall (referred to then as International Hall).

Although the full collection includes nearly every issue from 1990 to 2015, there are 15 missing issues that archive staff hope to still find. Anyone with information about the missing issues is encouraged to contact University Archives.

“This is really exciting,” said current Cougar Chronicle Editor-in-Chief Katlin Sweeney. “This project unites the various waves of the paper and allows us to see how it—and the University—has grown and changed. Many of the themes reported on then are still impacting us now so this will be an important tool for our reporters to use for research and data.”

Although funding, provided by the CSUSM 25th Anniversary Committee and the University Library, only supported the archiving of the paper through May 2015, Downie is hoping to secure, through grants or donations, additional resources to allow for the ongoing archive of the Cougar Chronicle. She also envisions that the online site will feature special collections, such as on the history of CSUSM homecoming.

She added: “Preserving the student newspaper means preserving campus history and the history of the surrounding region.”