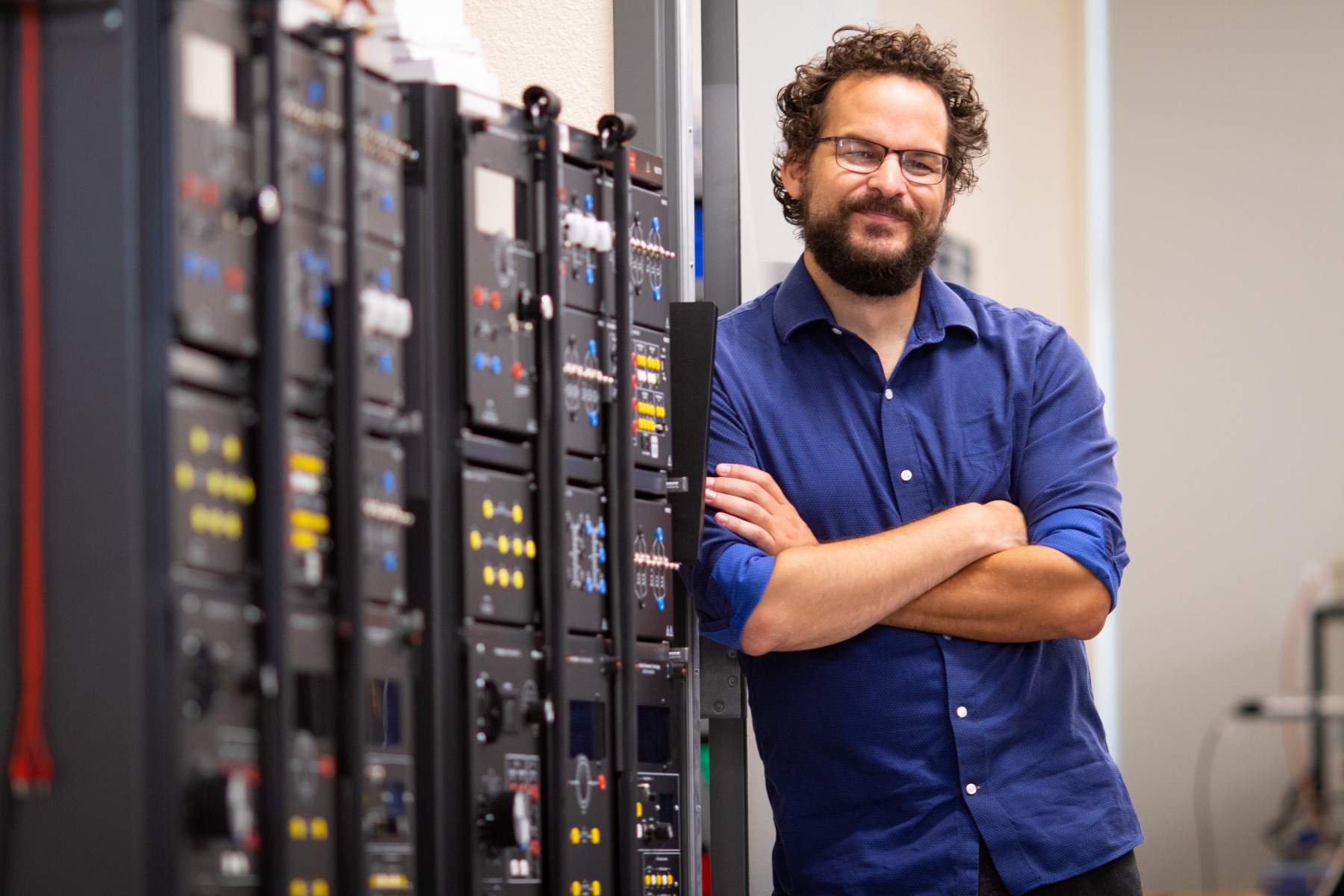 Sean Resor began classes at CSUSM at the age of 32 after transferring from Palomar College. Photo by Bradi Zapata

Cal State San Marcos electrical engineering student Sean Resor (he/him) walks into each of his many roles with a kind heart, helpful hand and open-minded ear, which allows him to pave his own path to success and build steady foundations for future generations of students.

Resor has had a rather untraditional academic journey, as he began classes at CSUSM at age 32 after transferring from Palomar College. Formerly a pre-nursing major, Resor spent 3½ years working for the National Health Service in England. It was there that he discovered a love for health care, in particular health care that everyone can afford.

Upon returning to the U.S., Resor was looking for a career change, but remained committed to giving back to a community in some way. It was the game Dungeons & Dragons that made him settle on engineering, as both involve solving problems within a given set of rules or constraints, something that he finds immensely satisfying.

Since spring 2021, Resor has invested time in building his résumé as an Engineering Summer Bridge Scholar and student assistant, radiation effects research intern with Space Micro, engineering peer mentor/student assistant, and collaborator with Modulim. At CSUSM, he also serves as the treasurer of Out in Science, Technology, Engineering, and Mathematics (oSTEM); holds officer roles in the National Society of Black Engineers (NSBE), Society of Women Engineers (SWE) and Society of Hispanic Professional Engineers (SHPE); is the former treasurer and a current member of the Institute of Electrical and Electronics Engineers (IEEE), was a member of the Marine Energy Collegiate Competition (MECC) team; and is part of the CSTEM Student Organization Council.

Resor’s can-do attitude makes his involvement in each of these organizations seem effortless, but it didn’t start that way.

“I’m an introvert who has social anxiety and is afraid of public speaking,” Resor said. “A year ago, I would’ve never done some of the things that I’ve been able to do. But being in clubs and working with my academic adviser has taught me how to be more confident.”

He invests this attribute in his peers, particularly those in oSTEM, a student-led organization for LGBTQA+ individuals and allies in STEM majors or fields. The organization was founded in spring 2021 by former students Ciara Sanders and Elizabeth “Eli” Murguia, with advising from mathematics professor Kimberly Ayers (she/her).

“Sean has put an incredible amount of work into growing our oSTEM chapter and engaging with other students,” Ayers said. “I’ve been incredibly impressed with the way he’s been able to work with the other students. The way they speak about him, I can tell they’re inspired by his work and his action on campus.”

As treasurer, Resor is committed to expanding the organization by increasing membership, gaining funding, setting an upward trajectory through a succession plan, broadening representation and, most importantly, helping younger students discover and/or understand their sexuality.

“I love giving people advice because the LGBTQA+ community now is very different from when I was growing up,” Resor said. “When I was in high school, we had Gay-Straight Alliance, but there were no older queer people who could be mentors in that space, in part because such a large number of them died during the AIDS epidemic.

“Back then, it was not accepted to talk about that sort of stuff nearly as much as it is now. It makes me a little sad for past Sean that he didn’t get to have someone to look up to and talk to in that space, but also, I’m so happy that today there is LGBTQA+ representation all over the place.”

“Most people assume that the small size of the program means that it's going to have an equally small number of opportunities, but that has not been my experience at all,” he said. “There's way more going on than anyone can take advantage of, and I’m so grateful for my time in the program.”

Jeffrey Morales (he/him), CSTEM pathways adviser, was integral in the program’s success for many reasons, including instilling a goal among the diverse pool of students to complete the program and invest their time in extracurriculars with the explicit goal of obtaining a job.

“I’ve had the privilege of working with many students who were driven and wanted to take on a challenge or gain leadership development that employers are looking for,” Morales said. “Students like Sean have been the face and the voice of this successful engineering program.” 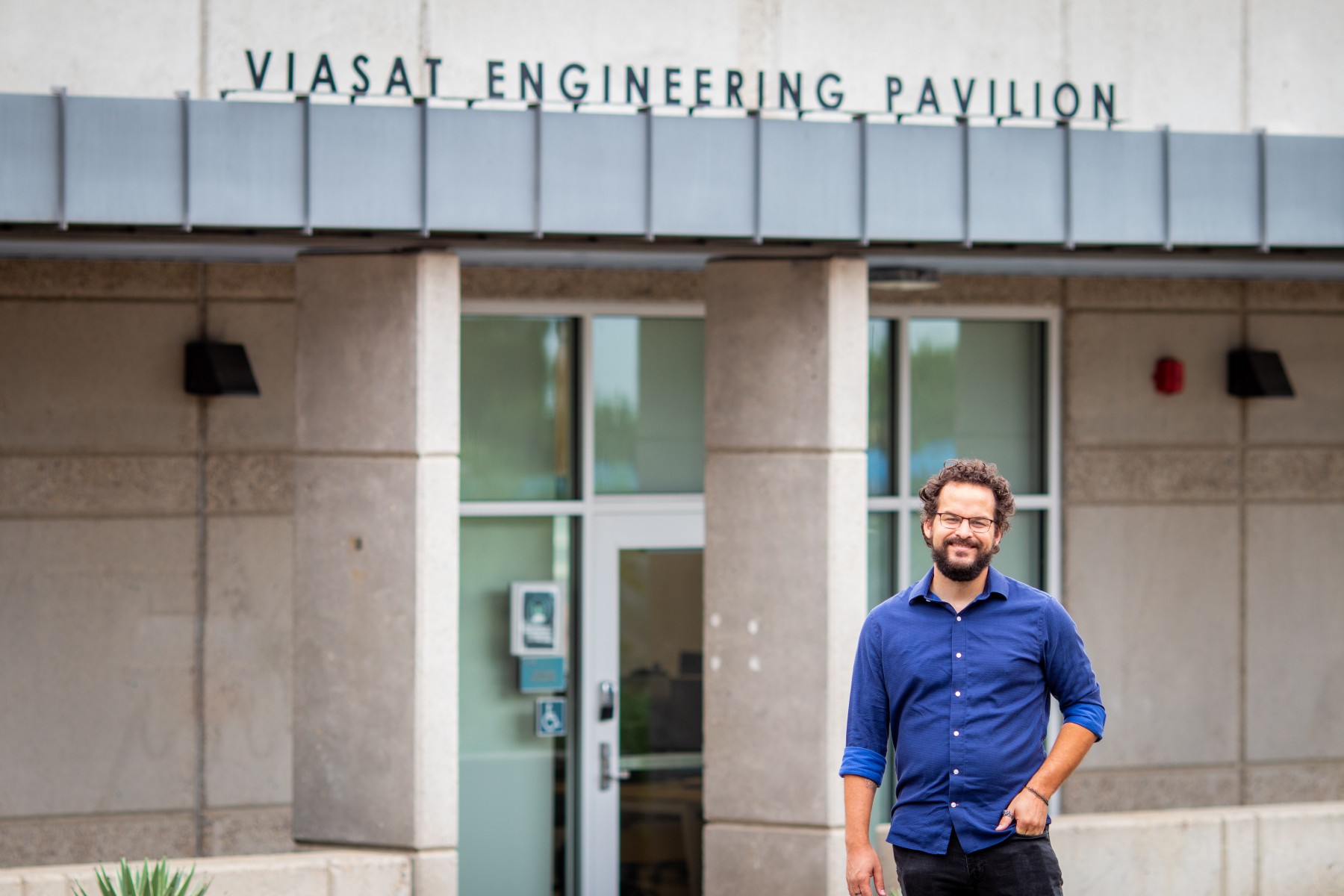 Sean Resor will be among CSUSM's first electrical engineering graduates in May. The program launched in fall 2020. Photo by Bradi Zapata

This mindset of being “clear, concise and confident” has been fundamental for many students, including Resor, driving them to go above and beyond the classroom by taking advantage of all the opportunities that CSUSM provides. One of the ways Resor does so is by working with Morales as a student assistant for electrical engineering and as a mentor for incoming freshman and transfer students as part of the Summer Bridge Program.

“I hired Sean because he had an eager drive to get more involved and to better prepare himself to land an internship or job offer before he graduated,” Morales said. “He seemed to want to connect with industry folks before even starting his first semester here at CSUSM.”

This characteristic has carried with Resor throughout his academic journey, and especially as he began exploring his senior project. A requirement of an electronic engineering degree at CSUSM is to participate in the Engineering Capstone Design program. Over the span of 10 months, students collaborate with industry sponsors and/or mentors with the goal of producing a product/prototype. The success of the project relies heavily on the intentional integration of multiparty collaboration as well as the individual student’s motivation to succeed and project alignment to their career passion.

Students typically wait until the spring semester of their senior year to select their sponsor and/or mentor from a list of CSTEM and CSUSM industry partners. However, Resor ambitiously found his own industry mentor and began working toward the project during the summer before his senior year.

David J. Cuccia, founder and chief technology officer of Modulim, a medical equipment manufacturer in Irvine, developed a system called Clarifi, which preserves tissue health by scanning a patient’s skin to show what their tissue oxygenation or circulation is like below the skin. This empowers clinicians with actionable microvascular data with which they can make clinical decisions that prevent lower limb complications due to diabetes, kidney disease, and peripheral arterial disease, which approximately 61 million people in the U.S. are at risk for, according to Modulim.com.

As part of the capstone design program, Resor and his classmate, Sean Hartshorn, collaborate with Cuccia and other engineering professionals at Modulim to develop a new generation of Clarifi device, one that would make it more affordable for clinicians and therefore more accessible to patients. In this way, Resor can bring his enthusiasm for affordable health care into his work, even if he no longer provides care for patients directly. Being able to draw on his previous health care experience is a sort of continuity that he finds satisfying.

Resor is able to work on large-scale projects like this partly because of the experience he gained while interning at Space Micro, an engineering-driven small business focused on technology advancement for high-reliability satellite subsystems. Here, Resor takes off-the-shelf parts and undergoes a series of problem-solving techniques to get advancements to where they can withstand the radiation in space. He regularly goes on test runs that cost over $50,000 to conduct potentially destructive tests using a cyclotron, a particle accelerator that uses electromagnetic fields to propel charged particles to high speeds and energies. According to the International Atomic Energy Agency, there are only 1,500 cyclotron facilities around the world, with only 249 in the United States and 50 available as academic/research sites.

“The cyclotron sets magnets to accelerate ions of specific elements, and eventually shoots them out as beams,” Resor said. “Those ions irradiate devices and strip electrons from what they pass through, therefore making it radioactive. The heavier the element, the more potentially destructive it is.  So, if your beam is made up of helium ions, it’s kind of like throwing feathers at your test device, whereas if you use something heavy like xenon it’s more like throwing bowling balls.”

Being part of projects like these is rare for students and/or interns. It is apparent that Resor will continue to make large waves in the industry, as he has already received two soft job offers before graduating next spring and at the university as he invests his time and skills into the success of his peers, student organizations, and the electrical engineering program at large.

“Sean is a person who takes initiative and is always proactive in all activities,” Morales said. “He takes the time to maintain a strong work ethic in his academics, extracurriculars and personal endeavors.”