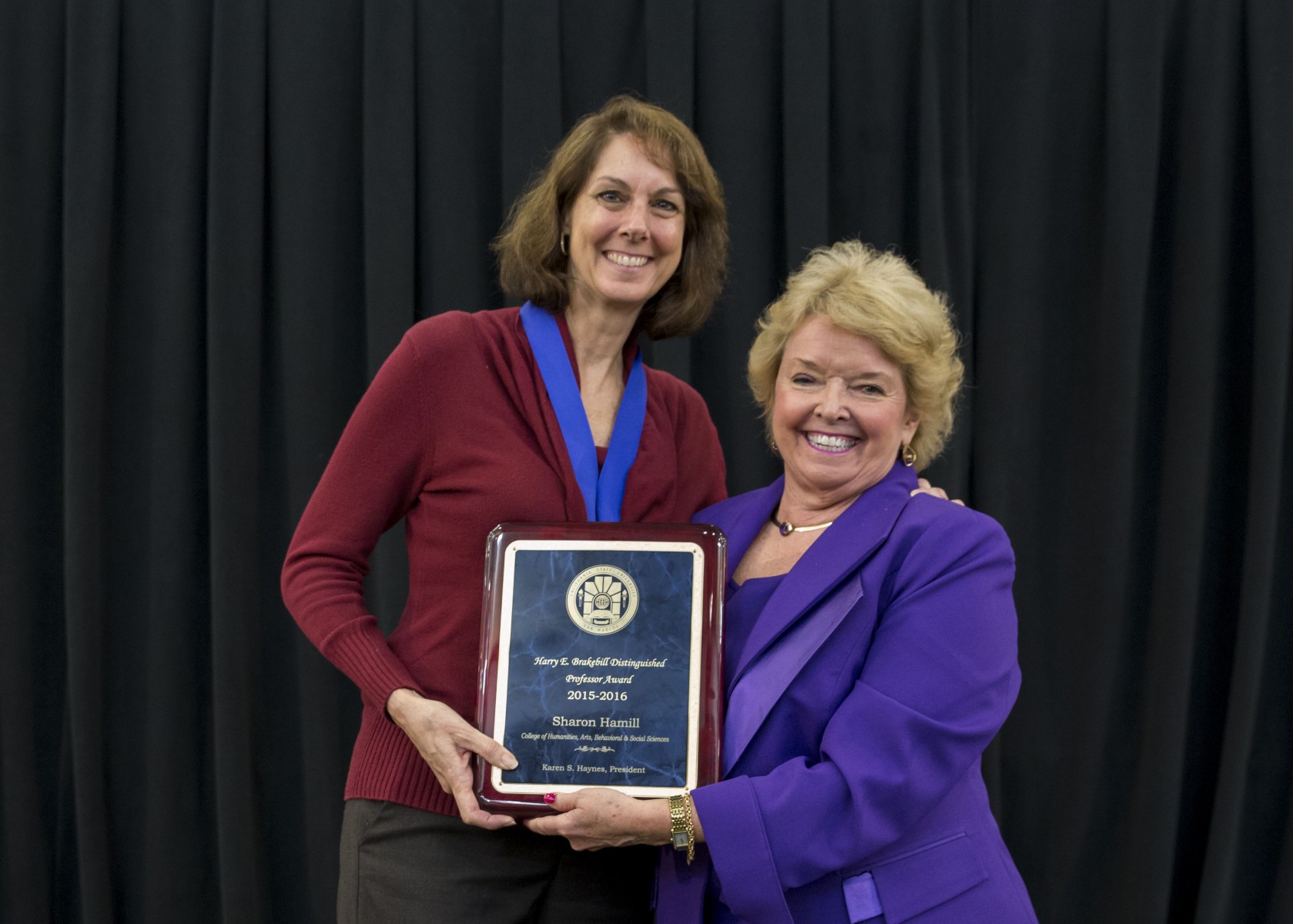 She is the former chair of the Cal State San Marcos psychology department, she serves as the faculty director of the California State University Institute for Palliative Care at CSUSM, she’s the first program director of the University’s new Child and Adolescent Development major, and she is at the forefront of research into the emotional and psychological impacts on teenagers and young adults who find themselves caring for family members afflicted with deadly diseases.

She also embodies CSUSM’s mission of working with and for the community. She is an active member of the Coalition for Compassionate Care and the North County Action Network, and she volunteers at the St. Francis Soup Kitchen. Her research in collaboration with Dr. Elisa Grant Vallone led to the development of a caregivers’ handbook, which was published by the Work-Life Coalition and Aging and Independence Services.

“She is a key leader on campus and in our community,” said Veronica Anover, professor of French and Spanish. “Every year she organizes the Because I Care Fair, inviting vendors from the care giving and health care sector, and offering informative talks and free health screening services. I had the privilege to give a talk about healing through writing and I was very impressed by the high number of attendees and the well-organized and informative fair for the community.”

As if that weren’t enough, Hamill co-authored a $70,000 Chargers Champions Grant to renovate the Rancho Buena Vista High School weight room. Working with Drs. Kim Pulvers and Devan Romero, she launched a wellness program at the Vista campus that promotes healthy living while focusing on family caregiving and other responsibilities many students undertake while in high school and how those stressors may contribute to drug and alcohol use.

“Adolescents and young adults are doing some very significant caregiving tasks, including feeding, bathing, and in some cases even managing finances, and there really hasn’t been much research on how that impacts academic achievement or mental health or drug and alcohol use,” said Hamill. “What we’re seeing is there is a toll that caregiving is taking on young people, but we’re not devoting many resources to address it.”

Teens and young adults comprise 25 percent of caregivers. A 2005 report showed there were 1.4 million youth under the age of 18 who serve as caregivers.

“The number of young people who are serving as caretakers will continue to grow,” said Hamill. “We need to get a handle now on how it’s impacting them and what can be done so they can develop into productive adults.”

Colleagues say Hamill’s greatest strength may be as an instructor, an instructor who has been known to transform her Psychology of Caregiving classroom into a nursing home, outfitting students with glasses to impair their vision and cotton on their ears to diminish their hearing so they could experience first hand what it feels like to get old and to care for someone else who is aged.

Students also actively take part in her research, and Hamill regularly takes them to regional and national conferences each year as co-authors of published manuscripts.

“Sharon Hamill is one of my most trusted mentors, friends and colleagues,” said Psychology Professor Elisa Grant-Vallone. “She is a dedicated teacher, a well-respected scholar in her field, and has incredible insight into dealing with complex situations. She holds herself and others to very high standards, and because of this her opinion is well respected across CSUSM.”

The Brakebill Award has been presented annually at CSUSM since 1997 and is named for Harry E. Brakebill, the financial advisor to the first California State College from 1965 to 1969 who retired after a 37-year career with the CSU as Executive Vice Chancellor. The award is given to faculty on the basis of outstanding contributions to their students, to their academic disciplines, and to their campus communities.

Said Hamill: “I feel deeply honored to have been selected for the award and am extremely grateful to my faculty, staff and administrator colleagues whom I admire very much.”