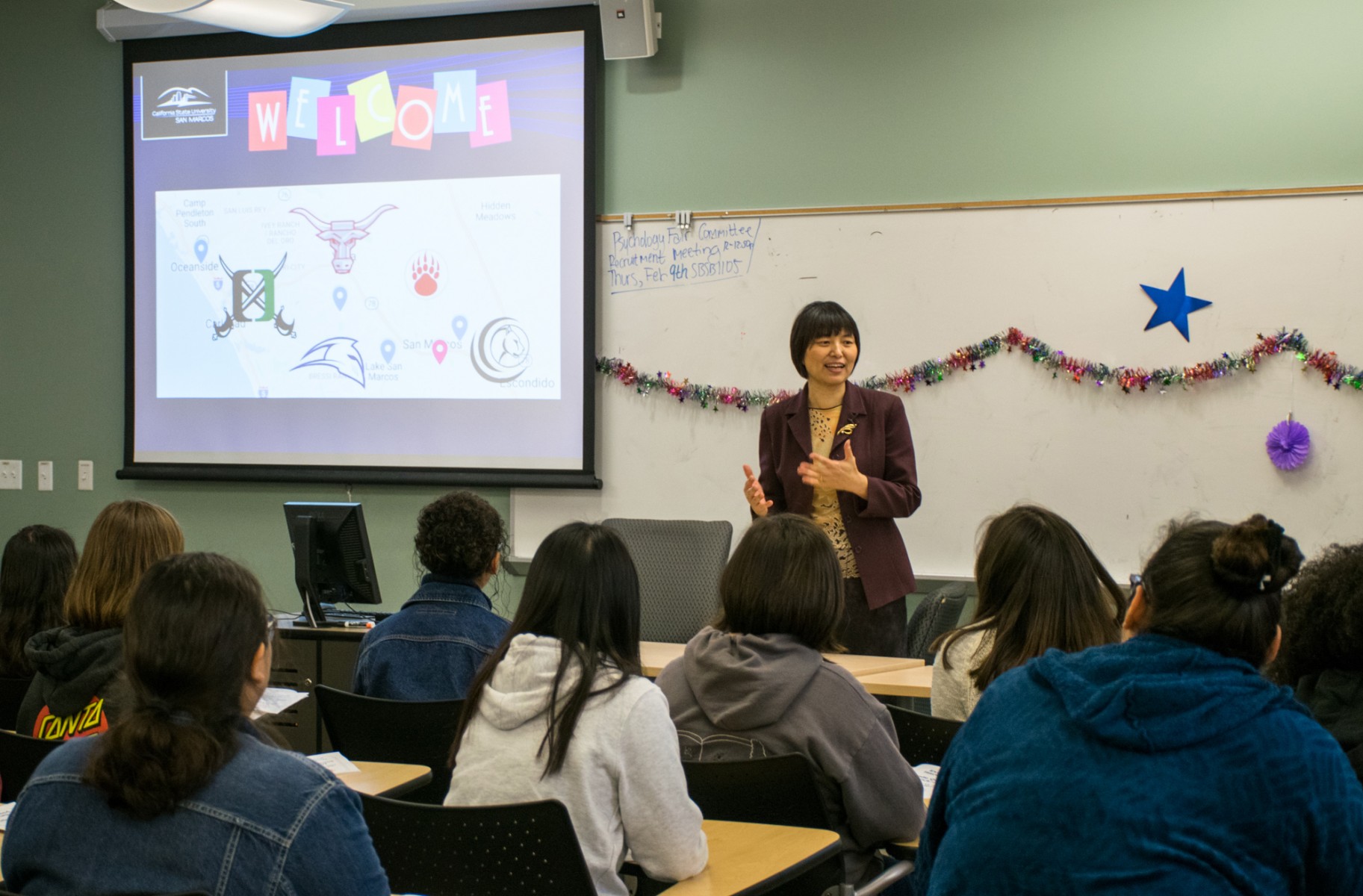 Youwen Ouyang is grateful for the Cal State San Marcos student mentors she has assisting with a grant that aims to help high school girls learn more about STEM career paths.

“They’re so dedicated,” said Ouyang, CSUSM’s computer science department chair. “They really work well as a team. They engage the students, and that’s what we want.”

Ouyang is the principal investigator on the $1.2 million, three-year grant from the National Science Foundation titled, “Inspiring Commitment for STEM Career Paths through Extended Women’s Hackathons.” Ouyang is supported by Moses Ochanji, an associate professor in the School of Education, and Anna Woodcock, a research faculty member in the psychology department, who are co-principal investigators on the grant.

“Our goal is to empower every participant and help them pursue future careers in computer science,” said Donnie Baltazar, who is the lead CSUSM student mentor and a regular volunteer at the Women’s Hackathon.

The mentors are computer science undergraduate students who facilitate the after-school activities at the participating high schools throughout the 10-week program.

“So far we have seen encouraging numbers of girls sign up for the after-school program and they are actively participating in the ‘Code Queens Clubs,’ ” Ochanji said. “I am excited about the opportunity to get girls engaged with coding during the early years in high school and look forward to seeing how participation in the program impacts their future career choices.”

Woodcock also has two research assistants helping on the project: Alondra Calva and Rudy Rodriguez. The research portion of the project will be ongoing throughout the grant.

Woodcock said they gathered data before the high school girls started the program and they will do so again in the middle and at the end of the project. They will be mapping the change in the interest in computer science among the participants. Additionally, they’ll look at students’ perception of their coding skills, how much they identify with being a computer scientist and feel like they belong in that field, and how much they feel that computer science aligns with their goals and values.

Woodcock said the CSUSM student mentors have played an integral role in getting the project off to a strong start.

“We have to sustain that interest over 10 weeks, but I feel like there is not a better team of people to do it than Donnie and our mentors,” Woodcock said. “They are just phenomenal.”

Ouyang said the computer science background of the participating high school students varies widely. While some are taking Advanced Placement computer science courses, others are freshman who have had little exposure to the field.

“I’m very excited about the wide range of students from different backgrounds that we have,” Ouyang said. “That’s what the grant is really targeting. We’re not just recruiting students who already think they’re on a computer science path. We want this to be a way to open up an opportunity for everybody, especially those who never thought about computer science.”

“This project is a step in the right direction for helping the underrepresented demographics in computer science get exposure to the field,” he said.

STEM disciplines vary when it comes to inclusion of women and minorities. While biological sciences almost have parity in gender distribution, women and minorities are still chronically underrepresented in fields such as computer science, chemistry and engineering. However, almost 50 percent of high school girls participating in the project are Latina, based on initial data.

“The more we reach out and educate, the further we will all go along the path to new technologies and achievements,” Baltazar said.