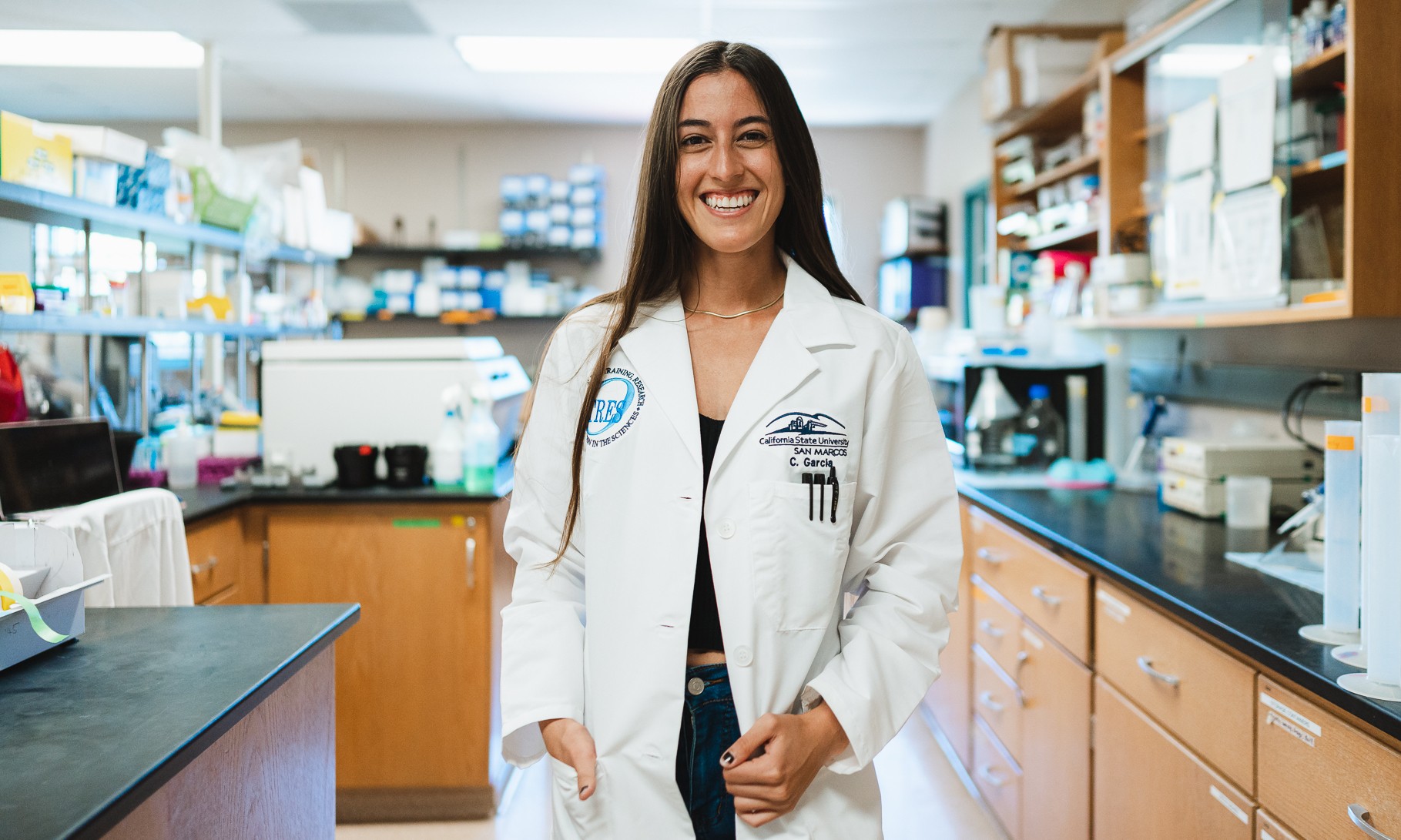 Clarissa Garcia will receive her bachelor's in biological sciences in May. Photo by Long Truong

Growing up, Clarissa Garcia’s parents worked multiple jobs and long hours. Garcia spent a lot of the time at her grandparents’ house while her parents worked to support the family.

Little did Garcia know that this would spark her interest in pursuing a career in science research years later.

“One of the things she bought was through an infomercial, and it was this rock tumbler,” said Garcia, who will graduate from Cal State San Marcos next month with a bachelor’s in biological sciences with a concentration in molecular and cellular biology. “It's personalized to you, and you can take any of the rocks that you find in your backyard or in a river and put it in a spinning turbine for weeks. It ends up polishing these beautiful rocks for you. It didn’t end up working. That was probably the best one I think we did, even though it didn't work.”

When the opportunity presented itself to study and run track at CSUSM, pursuing science made sense to Garcia. Not only did Garcia have the same inquisitiveness for science as her grandmother, but she had the opportunity to turn her passion into a life-long career.

But when Garcia told her parents she was admitted to CSUSM, her mom walked away from her bedroom and didn’t say much when she heard the news.

Garcia knew her family had to make sacrifices to provide her with opportunity. She remembers the stories of her grandparents immigrating from Mexico and being pulled out of kindergarten to start working. They worked trade jobs and never had the ability to attend college because it was too expensive, so Garcia understood why her mom would be hesitant about higher education. And it was difficult for Garcia’s mom to see her daughter leave home at 18 to attend CSUSM.

“It was kind of awkward,” Garcia said. “I still decided to go, and I think the reason why I wanted to go is that I knew what was out there. I knew it would open so many doors for me. I knew that I wouldn't be as limited, and I could have the experience of meeting new people and making new connections and have that freedom to navigate my own career.”

That career likely will involve cancer research, a disease that has hit close to home for Garcia. Antonia died of lung cancer when Garcia was 11 years old and her maternal grandmother, Luisa Tejeda, died from cancer last October.

Garcia spent five months during the pandemic helping to care for her bedridden aunt, Martha Betancourt, who was diagnosed with osteosarcoma, a type of bone cancer. Garcia would catch up with her classes in the evening after taking care of her aunt. She maintained a 3.8 grade-point average despite those challenges.

Garcia was accepted into CSUSM’s Undergraduate Research Initiative for Scientific Enhancement (U-RISE) program, which is helping her pursue a career path in cancer research in honor of Antonia, Luisa and Martha.

“I think the biggest thing that has helped me is the U-RISE fellowship, because now I have a cohort of people in the STEM field who are also first gen or minoritized,” Garcia said. “And those are like my life-long friends, so it's been very helpful, especially to be a first-gen student at Cal State San Marcos.”

Garcia attended a summer research program in 2019 at George Washington University through U-RISE and explored an immunology-based lab on lymphoma. The program experience led Garcia to join biology professor Jane Kim’s lab to broaden her research background. It was a challenging time as instruction temporarily moved online because of the pandemic. But Garcia was still able to complete a project involving bioinformatic analysis using publicly available datasets during fall 2020 when on-campus research at CSUSM was limited.

“Clarissa is a model of perseverance and strength in the way that she seeks out opportunities to move toward her goal of being an independent scientist in the field of cancer research,” Kim said. “She took the initiative to audit a population genetics course to gain further knowledge and reached out to the authors of published papers to inquire about their datasets. Her efforts have been validated by awards for her conference presentations and all-academic honors as a track and cross-country athlete over multiple semesters.”

Over the past three years, Garcia has worked on a half-dozen research projects in four different labs. These were intentional decisions as Garcia wanted to broaden her research knowledge as much as possible.

Garcia will continue her work this fall in a Ph.D. program. The schools she is considering include Stanford, Sanford Burnham Prebys, Oregon Health and Science University and the University of Colorado Denver Anschutz.

It has been a remarkable journey. Despite her mother’s initial hesitancy about seeing Garcia leave home, she has seen how higher education is putting her daughter on the path to a successful career.

“My mother has now started to realize my sacrifices in leaving the house at 18,” Garcia said. “Usually Hispanic people, we stay pretty close to home for a very long time. I think she's come to realize that it was necessary for my growth, and that I am getting great opportunities and the potential to have a very stable life and career and doing something that I'm passionate about. So she is very proud of me.”